Continue to The Hollywood Reporter SKIP AD
You will be redirected back to your article in seconds
Skip to main content
March 14, 2018 12:29pm

Surrounded by elected officials and his old friend Steven Spielberg, George Lucas on Wednesday presented the clearest vision to date of the new Lucas Museum of Narrative Art at a groundbreaking ceremony held at Los Angeles’ Exposition Park where the billion-dollar, space-age-like structure is set to rise.

“Yes, this is an art museum, but I’m trying to position it as an anthropological museum,” said Lucas in remarks made to several hundred people on hand, including surprise guest Spielberg, who was seated in the front row. “In my feeling, popular art is an insight into a society and what they aspire to be; what they really want and what they really are — it is telling the narrative of their story, their history and their belief system.”

Lucas and his wife Mellody Hobson announced last year that they had selected Los Angeles over Lucas’ hometown of San Francisco as the location for the museum. They chose Exposition Park due to its proximity to dozens of high schools, the University of Southern California — Lucas’ alma mater — and the fact that the parcel of land is easily accessible by public transportation.

The 300,000 square-foot building will house a collection of galleries and exhibition spaces displaying original works of art from world-renowned artists like David Hockney and Norman Rockwell, along with digital technologies. The museum will also feature daily film screenings and  include a range of one-of-a-kind ephemera including Star Wars memorabilia and illustrations from children’s books. Wednesday’s ceremony was an opportunity to hear Lucas’ first extended remarks on where the inspiration for the museum came from.

“Narrative art has always been popular. And I think the popular part of it is very important and that has a tendency to get lost in the hub-bub of modern city,” said Lucas. “I believe all kinds of arts have a right to exist. I want to support all the orphaned arts that no none wants to see but that everyone loves — that is my dream for this.”

Also released on Wednesday was a new batch of renderings of the five-story museum, which was designed by Chinese architect Ma Yansong of MAD Architects, who was also present at the ceremony. Those new renderings depict the landscaping for the museum’s 11 acres designed by L.A.-based landscape architecture firm Studio-MLA and some internal shots of the museum and its galleries. 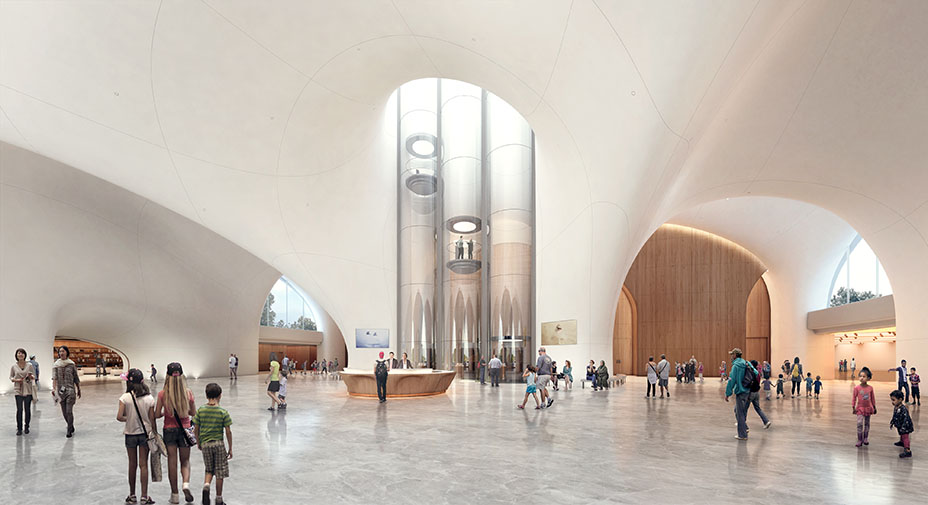 Lucas had previous proposals to locate the museum in San Francisco, and then later in Chicago, but both failed after community opposition mounted.

“In other places, we were selling a gift and that’s not right. We just wanted to give a gift,” said Hobson, who credited Mayor Eric Garcetti’s tenacity in courting Lucas and Hobson. “George said, ‘I want a child to look at this building and say, “I want to see what is inside of that building.”‘”

Construction of the museum, which is expected to take four years, will result in thousands of construction jobs and an estimated 1,000 permanent positions. The museum also comes with an endowment of at least $400 million, which amounts to one of the largest private gifts to a city in history.