As talks between SAG-AFTRA and the Alliance of Motion Picture and Television Producers continue in advance of a June 30 contract expiration, one thing isn’t in doubt: broadcast television residuals, once the most lucrative form of reuse payment for talent, will continue their slow fade.

In large part, that’s due to changing business realities: There are fewer network primetime reruns in an era of Hulu catch-up viewing; fewer broadcast syndication outlets in a world of five broadcast networks; and fewer opportunities for cable syndication as cable networks increasingly turn to original scripted or unscripted content in order to establish strong brand identities that will survive unbundling and cord cutting.

But an analysis by The Hollywood Reporter shows another factor also at work: the union contracts — including the recent Directors Guild and Writers Guild deals — have tweaked the formulas in unreported ways that have downsized residuals for broadcast product, delivering a double whammy to actors, writers and directors who once depended on especially hefty broadcast residuals.

At the same time, though, negotiators have focused on new digital forms of distributions, with the DGA introducing enhanced residuals in 2014 for product made for streaming sites such as Netflix. Those residuals were further increased in the DGA’s most recent deal, ratified earlier this year. And because of a phenomenon known as “pattern bargaining,” the other two above-the-line unions did or will obtain similar provisions.

Those Netflix residuals aren’t as lucrative as the broadcast formulas, but neither is the value of any single piece of content, in an era where users pay about $10 per month for unlimited access to an enormous streaming library.

For a macro view, take a look at WGA West figures — the only ones available — for different types of residuals. In 2015, that union’s new media residuals for television and new media product totaled about $25 million, while network primetime residuals were $19 million, domestic syndication was $36 million and basic cable syndication $29 million. A decade earlier, in 2005, there was no new media revenue, and the broadcast figures were $23 million, $31 million and $22 million. But adjusted for inflation, those figures in 2017 dollars are $29 million, $39 million and $28 million.

That means that primetime broadcast residuals declined by about one-third in real dollars over the last decade, while residuals from off-network syndication declined about 10 percent and cable syndication ended flat (after having peaked earlier in the decade, it turns out).

What the Contracts Say

For the micro view, THR peeled back the covers of the nearly impenetrable union agreements, which run to hundreds of pages of ifs, thens and whereases that date back decades in many cases.

A musty bookshelf and not so musty hard drive and website disgorged some older agreements that make for a useful comparison with the most recent deals. 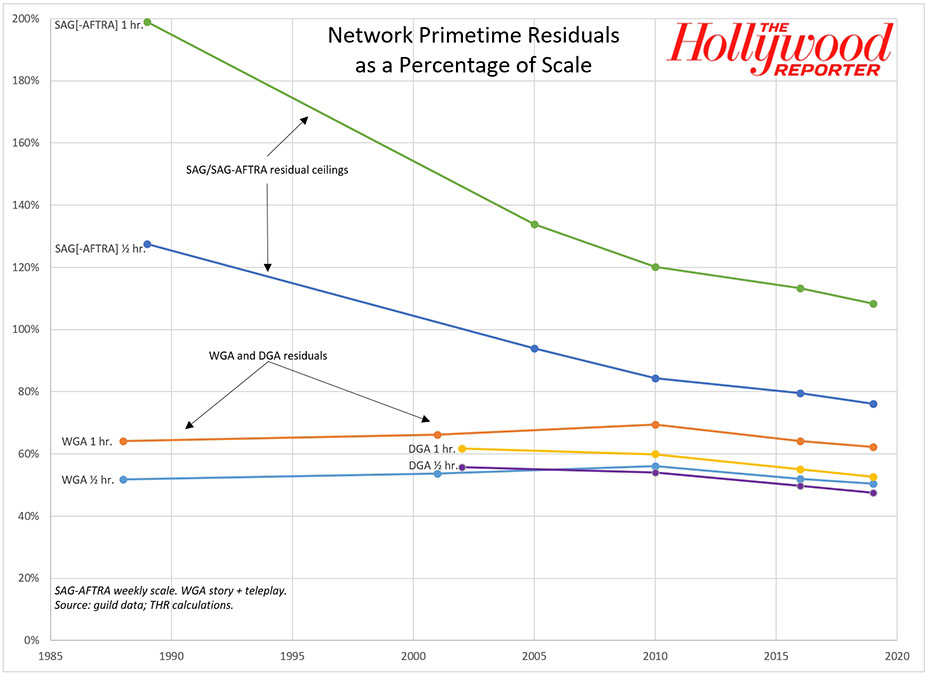 Start with the WGA. A network primetime rerun of a network primetime episode yields the writer an additional payment equal to 100 percent of a “residual base” that is around one-half (for half-hour programs) to two-thirds (for one-hours) of the scale minimum for such work, but that rough approximation conceals a significant decline: the precise proportions have been on a downward trend, from 56 percent (half-hour) and 69 percent (one-hour) in 2010 to 50 percent and 62 percent in 2019, under the terms of the deal the WGA reached last month. (In contrast, 1988 and 2001 figures were lower than 2010’s, indicating a previous upward trend.)

The DGA has seen a similar drop-off over that period, with residuals at 54 percent (half-hour) and 60 percent of scale wages in 2010 declining to 48 percent and 53 percent in 2016.

To be clear, the minimums themselves — and thus the residuals — have increased over time, generally at a rate slightly ahead of inflation. But the residual has declined in relative terms, when compared with the scale wage rates. And that’s exacerbated the decreases caused by changing viewing and distribution patterns.

SAG’s, and now SAG-AFTRA’s, formula works differently from the WGA’s and DGA’s. The actor gets a residual equal to what he or she was paid upfront for the work, even if it was above the scale rate, but it’s subject to a ceiling that caps the residual. There are separate ceilings for half-hour and one-hour shows, even though the day and weekly scale rates for such work are the same.

Back in 1989, the ceilings were 127 percent (half-hour) and 199 percent (one-hour) of the weekly rate, meaning that the residual could significantly exceed the weekly scale amount. But the figures have been dropping and, THR estimates, will be at 76 percent and 108 percent, respectively, by 2019, assuming the SAG-AFTRA deal now being negotiated ends up similar to the DGA’s.

What’s happening? The 2010-16 decline is due to the fact that network primetime residuals were frozen for three years in 2011, as THR exclusively reported and were subjected to a three-year slowdown starting in 2014, during which they increased at a slower rate than wage scales. The post-2017 decline is due to the fact that the recent DGA and WGA deals once again freeze primetime residuals, a fact that neither union highlighted publicly.

What about syndication residuals? For the first time, the WGA in its recent deal has decoupled these residuals from salary minimums, and over the next three years they will increase at a slower rate than scale wages. The DGA rates were already decoupled from scale wages, and will likewise be subject to a slowdown.

SAG-AFTRA syndication residuals are based on scale, and whether they will slow down, too — which would require decoupling them from scale — is unknown at this point. No doubt that topic is on the table in the bargaining room at the AMPTP’s Sherman Oaks headquarters.

But this much is clear: As viewers migrate to video on demand platforms like Netflix and Hulu, and even broadcast networks develop digital alternatives like CBS All Access, broadcast residuals will continue to fade, perhaps ultimately to black.