Luke Perry, the Riverdale star and actor best known for his role as Dylan McKay on Beverly Hills, 90210, has died, his rep confirmed to The Hollywood Reporter on Monday. He was 52.

Perry had suffered a massive stroke, his rep Arnold Robinson told THR. “He was surrounded by his children, Jack and Sophie; fiancée, Wendy Madison Bauer; ex-wife, Minnie Sharp; mother, Ann Bennett; stepfather, Steve Bennett; brother, Tom Perry; sister, Amy Coder; and other close family and friends,” said Robinson. “The family appreciates the outpouring of support and prayers that have been extended to Luke from around the world, and respectfully request privacy in this time of great mourning. No further details will be released at this time.”

The actor was hospitalized after suffering a stroke last Wednesday and had been under observation.

News of Perry’s hospitalization coincided with the announcement that Fox would be reviving Beverly Hills, 90210, in which Perry played McKay during the original show’s run through the 1990s. The upcoming series will see six original stars returning to play heightened versions of themselves; Perry, however, was not involved in the project. THR has reached out about the show’s status given the news.

Perry’s 90210 co-stars, including Ian Ziering and Shannen Doherty, had taken to social media to share their public support after news of his hospitalization last week. Over the weekend, Doherty, who played his girlfriend Brenda Walsh early on in the Fox drama, said she had been in touch with the actor since his stroke. “I can’t talk about it here ’cause I will literally start crying but I love him and he knows I love him. It’s Luke, and he’s my Dylan,” she told ET over the weekend.

“I’m going to be linked with him until I die, but that’s actually just fine. I created Dylan McKay. He’s mine,” the actor once said about the career-defining role.

Fox said in a statement: “Luke will always be part of the FOX family. Our thoughts and prayers are with his loved ones during this extremely difficult time. He will be deeply missed.”

Perry, born Coy Luther Perry III in Mansfield, Ohio, had initially auditioned for the role of Steve Sanders (played by Ziering) before being cast as McKay, the resident bad boy of the zip code in 90210, which premiered in October 1990. The brooding millionaire’s son would go on to romance Brenda Walsh (Doherty) and Kelly Taylor (Jennie Garth) in the Fox teen drama, resulting in two defining TV couples of the ’90s.

Perry did not appear in The CW’s 90210 reboot, which featured original stars Garth, Doherty and Tori Spelling, when it launched in 2008.

Ziering on Monday posted a photo of himself and Perry on Instagram with the caption, “Dearest Luke, I will forever bask in the loving memories we’ve shared over the last thirty years. May your journey forward be enriched by the magnificent souls who have passed before you, just like you have done here for those you leave behind. God please give him a seat close to to you, he deserves it.”

SAG-AFTRA president Gabrielle Carteris, who played Andrea Zuckerman on 90210, said Monday in a statement: “I am absolutely heartbroken. Luke was a tremendous force in the lives of so many. He was a very sensitive soul who was kind, generous and he fought for the underdog. He was a strong voice and an advocate who will be so missed by all who knew him. He has left his mark — never to be forgotten. My heart goes out to his family, friends and fans around the globe.”

Speaking about the loss of Perry, Doherty told People, “I am in shock. Heartbroken. Devastated by the loss of my friend. I have so many memories with Luke that made me smile and that are forever imprinted on my heart and mind.” She went on to describe him as “a smart, quiet, humble and complex man with a heart of gold and a never-ending well of integrity and love.” She later added a recent photo of her and Perry on Instagram and wrote that she is “struggling with this loss and am having a hard time with my thoughts. … Processing this is impossible right now.”

Garth also told People that her heart was “broken,” and Spelling told the magazine she was in “utter shock.” Spelling added, “Luke was one of the kindest and most humble human beings I’ve ever known. I’m grateful for the years of friendship we had. He truly was family to me, a protector and a brother.” And Rebecca Gayheart, who played his onscreen wife, posted a series of photos with herself and Perry from 90210, commenting that she, too, was “heartbroken.” 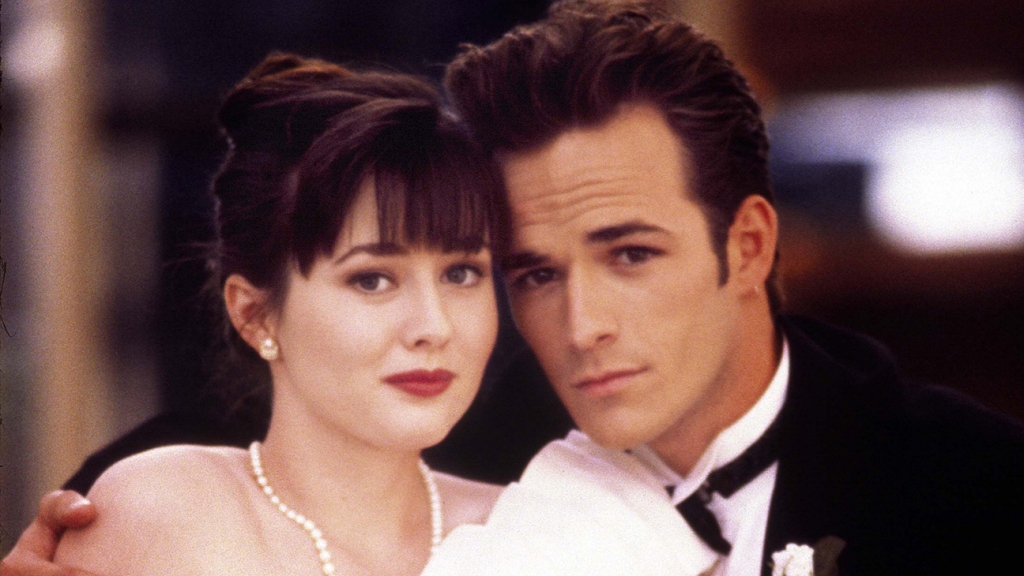 The 52-year-old actor starred on The CW’s comic book adaptation Riverdale, which films in Vancouver. Production was suspended Monday.

“We are deeply saddened to learn today about the passing of Luke Perry,” said the Riverdale executive producers — Roberto Aguirre-Sacasa, Greg Berlanti, Sarah Schechter and Jon Goldwater — Warner Bros. TV and The CW in a statement to THR. “A beloved member of the Riverdale, Warner Bros. and CW family, Luke was everything you would hope he would be: an incredibly caring, consummate professional with a giant heart, and a true friend to all. A father figure and mentor to the show’s young cast, Luke was incredibly generous, and he infused the set with love and kindness. Our thoughts are with Luke’s family during this most difficult time.”

Of his Riverdale role, Perry told THR in January 2017, “I like playing the dad because I like being a dad, and I think it’s a great character in the milieu of this show that I’m the grounded one, and I’m the guy who really cares about K.J., who cares about doing a good job and being a good construction worker. I love that.”

Writers for the CW show shared their heartbreak via social media. “Luke Perry… you were a joyful and vibrant soul. You will be missed but most certainly your legacy will be remembered forever. Rest in love and peace, friend. #Riverdale,” read a post from the writers room. Molly Ringwald, who played his ex-wife, said her heart was “broken” on Twitter: “I will miss you so much Luke Perry. Sending all my love to your family.”

Perry got his acting start on daytime soap operas before 90210 launched him into teen idol fame. Shortly after Perry’s heartthrob debut on 90210, he starred in the Buffy the Vampire Slayer movie in 1992. “The first time I met Luke Perry we talked about what kind of movie we wanted ‘Buffy’ to be. I asked if he’d ever seen ‘Near Dark’ and he gave me a look of HOW DARE YOU SIR and I knew we’d get along. Funny, committed, and always gracious. He shouldn’t be gone,” wrote Buffy series creator Joss Whedon on Monday.

Sarah Michelle Gellar, who would go on to lead the Buffy series, said Monday that she is comforting Doherty. “My entire high school experience was shaped by Brenda and Dylan. Now I have to hold my dear friend @theshando hand, while she mourns the loss of #lukeperry,” she wrote along with a picture of the 90210 pair. “This is not how it’s supposed to happen. I hope his family knows many lives he touched. ‘I chose. I chose you. I want you. I’ve always wanted you’ – my favorite quote.”

Perry made a marked turn to portray Reverend Jeremiah Cloutier on HBO’s prison drama Oz; played the titular character on Showtime’s Jeremiah; and made appearances on the hit TV shows Will & Grace and What I Like About You after landing 90210. He also made voice cameos to play himself on Fox’s The Simpsons and Family Guy.

He was also set to appear on the big screen in Quentin Tarantino’s forthcoming Once Upon a Time in Hollywood, which is currently in postproduction, as actor Wayne Maunder.

Luke Perry on 'Riverdale,' '90210' Similarities and Whether Fred Andrews Takes After Jim Walsh