It was only last Monday when Madelaine Petsch made her inaugural appearance at the Met Gala, floating onto the pink carpet like a fairy in a winged gown from Jean Paul Gaultier’s SS19 collection. Days later, while chatting with The Hollywood Reporter at New York’s Butterfly Bar, the Riverdale star and YouTube personality said she was still coming down from the high of attending fashion’s most magical night.

“I still have to pinch myself because it’s hard to believe that I actually went. I can’t believe that I was invited!” she says. “It was way less scary or stressful than I thought it would be. It was a dream come true, really.”

The past year has been a manifestation of Petsch’s wildest fashion fantasies, marked by a series of milestone moments at tentpole events. From walking the Emmys’ red carpet in Prada to turning heads at Vanity Fair‘s Oscars party in Paolo Sebastian and her recent couture display at Anna Wintour’s annual ball, the actress has quickly become a fixture among Hollywood’s style set.

“I’ve always been into fashion. I just didn’t always know how to express myself with my style the way that I do now,” she says, noting that the relationships she’s built with designers — championed by her stylists, Rob Zangardi and Mariel Haenn, whose A-list clients include Jessica Biel and Jennifer Lopez — have helped refine her look. “I think we’ve figured out who I am on a carpet. We’ve finally gotten into a rhythm where I get it. I see my fashion sense more vividly now, and the story is all kind of coming together for me.” 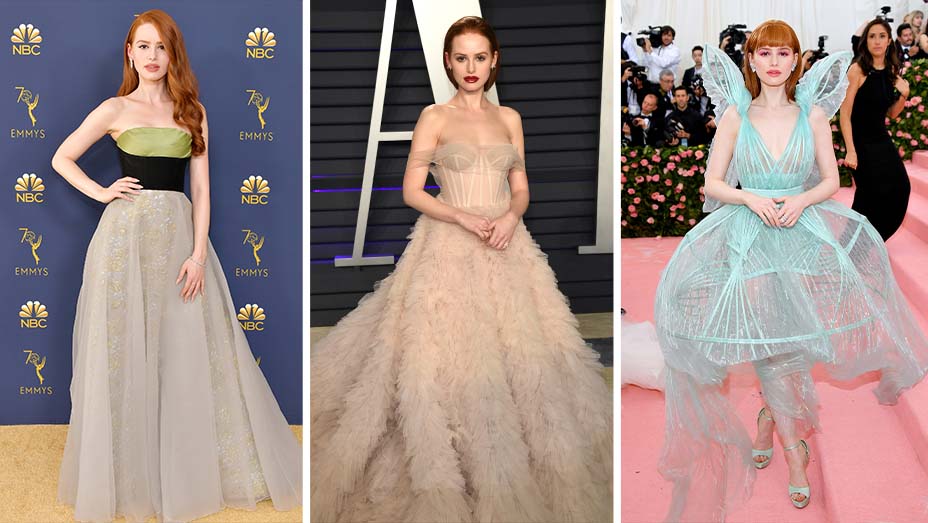 But before pros got involved, Petsch says that someone in particular had a huge hand in upgrading her sartorial narrative: Cheryl Blossom. Growing up with bright red hair, Petsch says that she once subscribed to the unspoken rule — or “urban legend,” as she calls it — that a ginger mane means warm hues are off limits. However, her mind-set changed in late 2015, not long after she won the role of Riverdale‘s resident rich girl, who happens to have an affinity for all things crimson-colored despite her fiery locks.

“When I booked the show, the costume designers [Rebekka Sorensen-Kjelstrup and Hala Bahmet] called me and asked, ‘Hey, what colors do you not like on yourself?'” she recounts. “I said, ‘I’m kind of scared of wearing red.’ I was then told that red outfits were actually written into Cheryl’s storyline, that they were a huge part of my character. Then, of course, I was like, ‘OK, yep, red’s my favorite color!’ The funny thing is that now it really is. Cheryl has taught me how to take more risks with color and how to be fearless with my own style.”

Petsch’s bold approach to fashion (which has prompted several Instagram accounts solely dedicated to tracking her style choices daily) caught the attention of Prive Revaux founder David Schottenstein, who tapped her to design two capsule collections for his eyewear brand. The 24-year-old’s latest range, the M3 Prive Revaux x Madelaine line — which retails for $39.95 apiece — will be available for purchase on May 27. “It’s one of the rare instances in my world, other than my YouTube channel, where I can just be Madelaine,” she says, sporting her Matrix frames paired with a striped Self Portrait suit and thigh-high boots. “After spending so much time on it, it feels really personal. This collection is kind of an extension of myself.”

Below, Petsch talks more with THR about adding designer to her résumé and using fashion as another creative outlet — plus, she shares her thoughts on Prince Harry and Meghan Markle giving their royal baby a name seemingly inspired by Riverdale (which airs its season three finale Wednesday night on The CW). 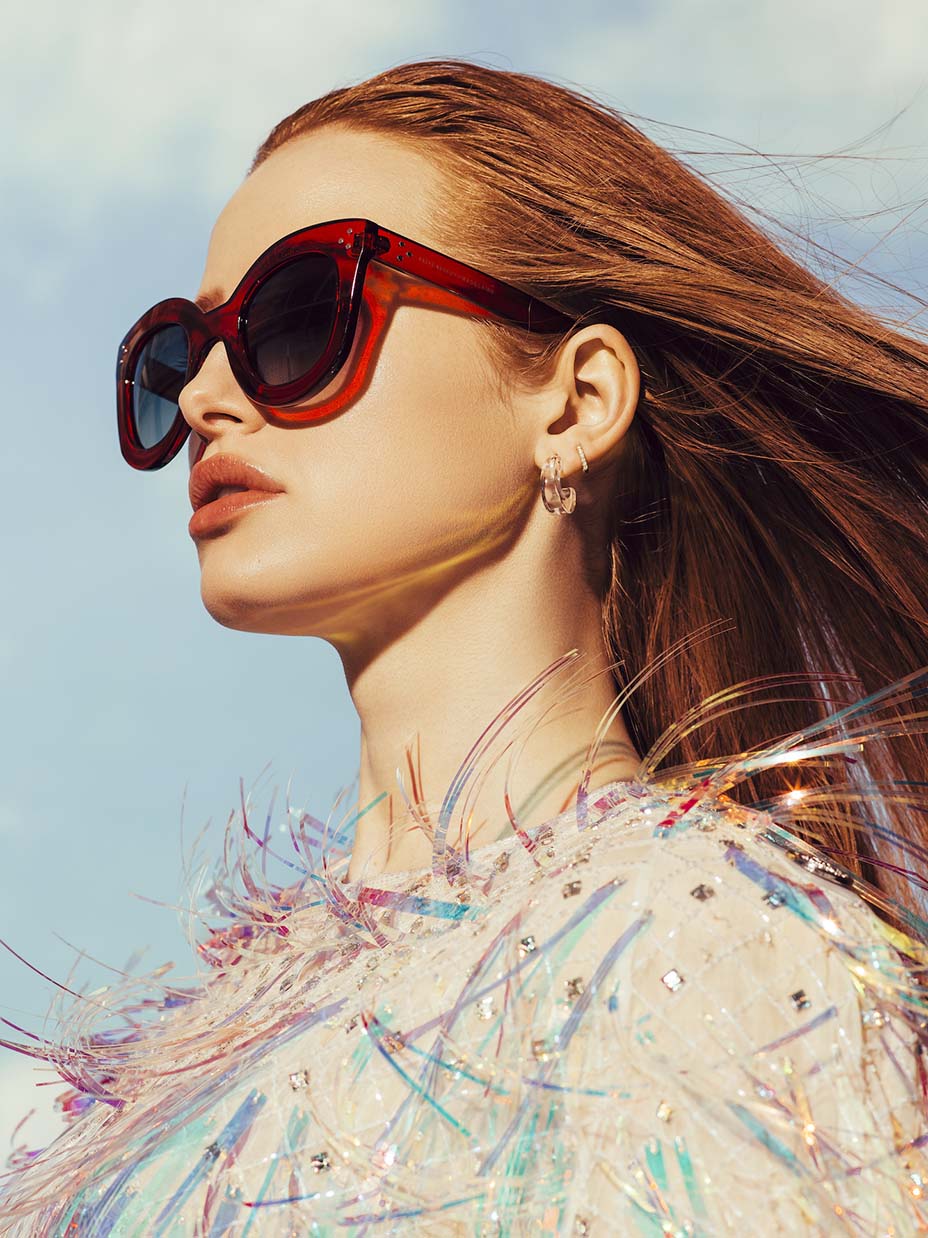 How has designing this latest collection for Prive Revaux been creatively fulfilling in a way that acting isn’t?

You’re putting something on paper. With acting, especially on a TV show, you don’t even know what the next episode holds for you. With movies, you see the beginning, middle and end. That’s why I think movies are sometimes more desirable for people, and then with television, you don’t really know what you’re getting into. But with this, you’re totally and fully creatively in control first of all. Second of all, you have a finished product that is done when you’re done with it. With Riverdale, it’s like you never know when it’s over — which is obviously great; I want to have this job forever! But it’s nice to have something different and something you can hold, and that people can have in a different way. It’s also another way for people to relate to me as a fan.

What was your relationship with fashion like before you became famous?

I was a little bit tamer when it came to, like I said, colors specifically. Growing up, I was always told, “You can’t wear red or orange or pinks” — anything with an orange undertone, because I’m a redhead. It’s almost like it’s taboo for us to wear those colors. What Riverdale helped me with is merging my sense of style and being comfortable wearing a wider range of colors, expressing myself and not really caring. And that’s what I think fashion is all about — really expressing yourself unapologetically.

As Miranda Hobbes on Sex and the City, Cynthia Nixon wore a great deal of reds, oranges and pinks even though she was a redhead…

You certainly stepped outside the box for this year’s “Camp”-themed Met Gala. We’ve heard so many different accounts of what that night was like, but what was your experience?

I have social anxiety, so I was ramping it up in my head. You have to go alone unless you’re Beyonce. I went alone, but my Riverdale cast was there. So, automatically, that was a security blanket for me. But it was very — I guess “chill” would be the wrong word. It’s a night for fashion, but I had a dress that made me feel so pretty and that I felt so confident in. I felt good being there, and it was really nice and just so beautiful. Also, I had never been to the Metropolitan Museum of Art before. Talk about a fun first time going there! And the “Camp” theme was amazing because you can really go any direction with it. You can be playful and fun and be as creative as you want, which we love. There are so many different ways to get your creative juices flowing, and this was definitely one of them. I also knew a lot of people who were there, which was really nice. It felt very comfortable but also terrifying. Comfortably terrifying — enough to feel like I’m challenging myself in a nice new way. But I was also thinking to myself, “This is sick. This is incredible.”

How would you describe your personal style, and how has it evolved since Riverdale first premiered in 2017?

Every day I have a different personal style. It’s really hard for me to answer that question because today, I wanted to go for an edgy suit vibe. But then, at the Met, I wanted to be a fairy tale. I just go with my mood and what I’m feeling in the moment. I don’t like to stick to one thing. That’s another great thing about art and fashion. You can constantly change your mind, do different things every day and take risks.

Now that you’ve walked your fair share of carpets and have attended fashion shows around the world, what designers do you gravitate toward?

I just went to the Louis Vuitton cruise show. Oh my God, it was incredible. I’m a super huge fan of Louis Vuitton. I’m a huge fan of Prada. For street style, I go for a nice pair of Agolde or Mother Denim jeans with a nice chunky Gucci boot and a leather jacket sometimes. Sometimes I’ll wear a cute little crop top. It changes with the weather. I can wear a summer dress one day and then the next I can wear an all-black biker outfit. I’ve got so much different stuff in my closet.

And how do you collaborate with your stylists, Rob Zangardi and Mariel Haenn, on looks?

They’re so amazing. I love them. They pull a bunch of stuff because they know me, and then I pick my favorites, and we put them all in front of us. And whatever we want to try on, we just start trying on. It’s the best time ever. It’s all about spontaneity and keeping it fun and lighthearted. And it’s very, very collaborative. It’s all about making me feel comfortable and confident and making them feel comfortable and confident in the looks that we create together.

Who are your style icons?

I love Audrey Hepburn. I love Edie Sedgwick. Andy Warhol isn’t necessarily a style icon, but I love his art and that inspires me. Those are my three majors. But, also, Ezra Miller is weirdly kind of like a style icon to me. And it’s cool because he’s relevant and we’re in the industry at the same time. But what I love about him is that he takes risks in a way that inspires me to take bigger risks as well.

As you’ve said, your Riverdale character, Cheryl Blossom, has opened you up to including warmer colors in your wardrobe. But reds aside, where does your style and Cheryl’s overlap the most?

She’s a little bit more wound up than me, meaning sometimes she can be a little more put together. And I enjoy more of the messy-chic in my personal style. I call it the lazy look. [Laughs.] But I think she has helped me bring a little bit more of that buttoned-up moment into my look, that polished, tailored vibe. It’s just about taking what works and what doesn’t and then making it work for you. I’m finding that part of Cheryl really working for me lately.

Speaking of Riverdale, what are your thoughts on Prince Harry and Meghan Markle naming their new son Archie?

Everyone’s been asking me that! I am not somebody who would have kept up with that had he not been named Archie. I don’t think I would have ever noticed. But that’s great! I’m happy they had a baby. I’m happy that it’s healthy and has a name. I know they didn’t name him after Archie Andrews, and if they did, that’s really cool. Are they even aware of our show? They’re royals! They might be a little busy, right?

Perhaps. But don’t you love the thought of Harry and Meghan cozying up at the palace watching Riverdale together?

OK, yeah, you have a point there. Wow, what an image!