“This is not a backdrop,” WME partner Richard Weitz said of the scene over his shoulder, an empty Dodgers Stadium lit up as if the boys in blue were about to take the field. It looked so picture-perfect that it’s easy to see why someone might assume it was a faux digital backdrop. But not Friday night.

For their 40th installment of RWQuarantunes, Richard and daughter Demi Weitz broadcast live at Dodgers headquarters for a special Zoom fundraiser in partnership with the Los Angeles Dodgers Foundation to benefit the Los Angeles Regional Food Bank. “This is amazing, guys,” continued Richard, seated next to Demi, both decked out in Dodgers jerseys. The showing marked a third on location outing for the pair, who typically appear from their Beverly Hills kitchen with just a laptop, after appearances at the Hollywood Bowl and Center Theatre Group’s Ahmanson Theatre. “We have so many surprises tonight.”

And there were. Not only were there appearances by Dodgers past (Steve Garvey), present (MVP Corey Seager) and future (Cy Young winner Trevor Bauer), there were musical performances on the field from the likes of Robin Thicke and El DeBarge, celebrity supporters like Ted Danson and Mary Steenburgen, and a tribute to the legendary Tommy Lasorda.

Putting an exclamation point on the boldfaced-name heavy program was the fundraising tally of $1.1 million raised for the Los Angeles Regional Food Bank that will provide 3.3 million meals for Angelenos amid the devastating COVID-19 pandemic. The total pushed RWQuarantunes over the $18 million mark as the series — started last March by the Weitz father-daughter duo and featuring a parade of hundreds of A-list musicians — has raised money for dozens of organizations and cemented itself as a true pandemic phenomenon. 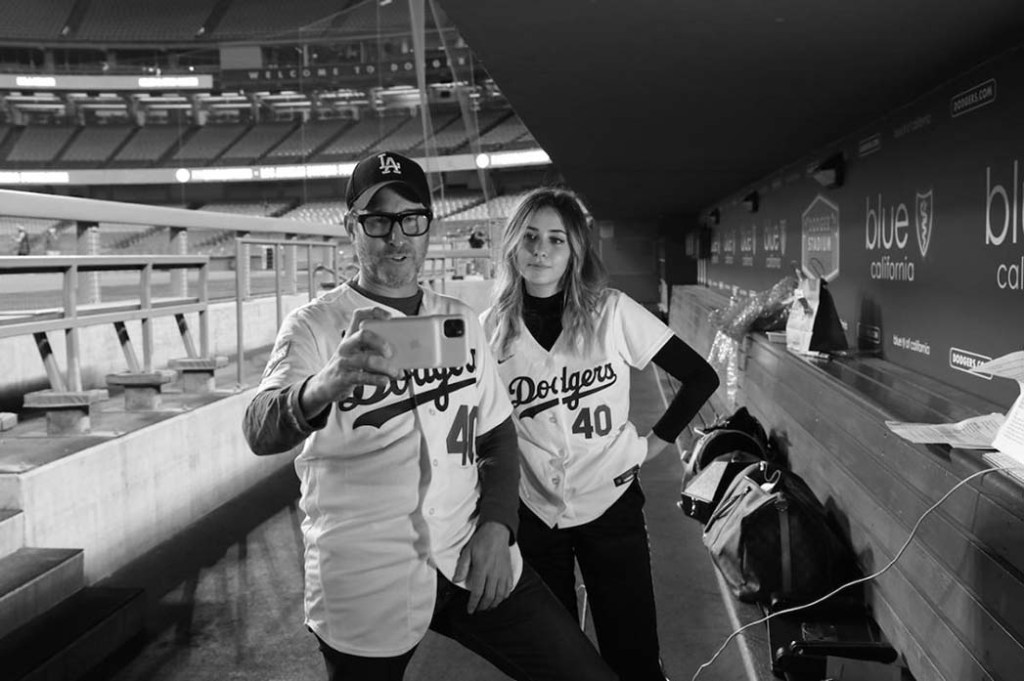 As much as the evening was designed to shine a light on LADF’s important work in supporting a variety of causes across the city (education, health care, homelessness and social justice), it also, at times, felt like a celebration of the Dodgers’ World Series triumph following the October victory over the Tampa Bay Rays.

“Thank you, guys, for bringing the World Series championship to Los Angeles,” said owner Magic Johnson, appearing from his home alongside wife Cookie. “Guess what? We’re going to do it again. We’re going to raise a lot of money tonight and we are going to win again.”

Johnson was joined by Dodgers insiders like manager Dave Roberts, voice of Dodger Stadium Todd Leitz and organist Dieter Ruehle, who helped infuse the evening with the spirit of a home game. DJ Cassidy helped kick off the festivities by doing a set from the pitcher’s mound while wearing a satin Dodgers jacket. His opening set featured 2 Pac and Dr. Dre (“California Love”), Katy Perry (“California Gurls”), Randy Newman (“Love L.A.”) and others.

Richard then introduced Roberts, who offered brief remarks to the audience, which grew to 2,000 on Zoom and on YouTube. “Demi and Richard,” Roberts said. “We all tip our caps to you guys.” Roberts noted the number of current and former team members who were on the call, a list that included Bauer, Seager, Mookie Betts, Joe Kelly, Max Muncy, David Price, Will Smith, Fernando Valenzuela, Andre Ethier and others. 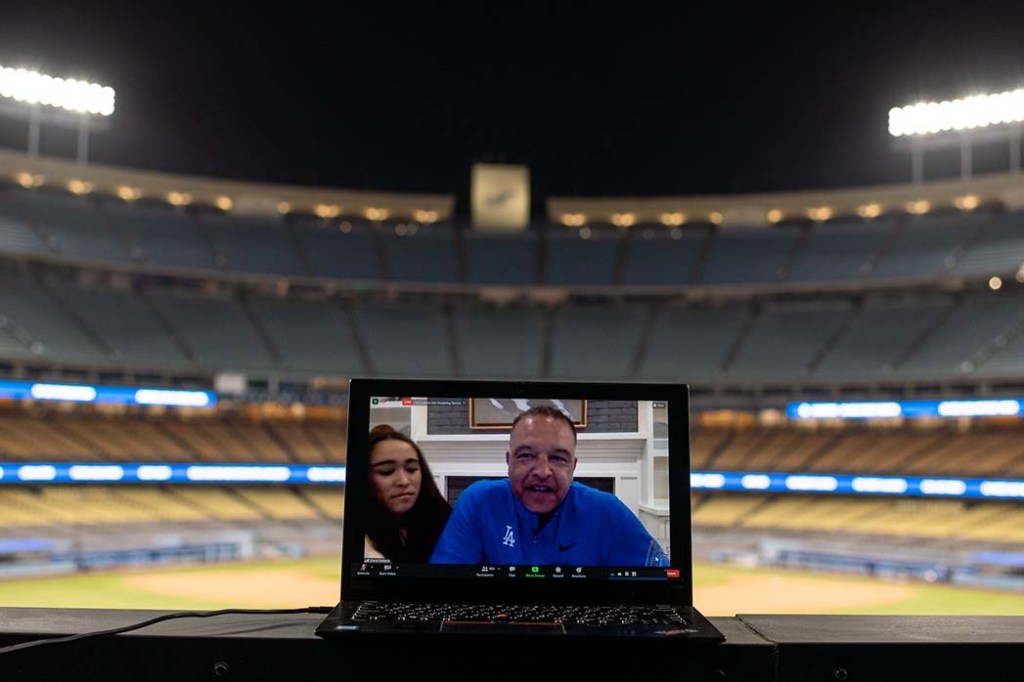 Newly acquired Bauer got a special shout-out followed by compliments from Johnson. “I know he is an amazing competitor, a great pitcher. He’s going to do some great things,” Johnson said of the 30-year-old, who scored a three-year deal with the team worth north of $100 million. “Trevor, listen, all you got to do is do your part, brother. That’s how we won last season, and that’s how we’re going to win this season.”

Bob Costas then appeared from his home studio for a quick Q&A with Roberts, who praised his team for how they handled the pandemic while also raising their voices for social justice. He also shared love for the late Lasorda. “He’s got a legacy that will live forever,” Roberts said. “We’ve got big shoes to fill to keep that legacy living.”

Danson came next. The veteran actor, who now stars on NBC’s Mr. Mayor, regaled the audience with a story of filming a scene from the show at Dodgers Stadium. “My character was going to throw out the first pitch,” Danson explained. “I got to stand on the mound and I had a baseball in my hand. I threw it to a prop guy that was about 15 feet away, but it was one of the biggest thrills of my life.”

Richard Weitz then asked everyone watching to raise a toast to the home team as he did so from his broadcast perch with a glass of Don Julio 1942 while thanking Diageo. (Dodger partners Ketel One Vodka and Coca-Cola provided premium cocktail kit deliveries while Jon & Vinny’s and Osteria Mozza delivered meals to guests who donated in advance.) “Here’s to the World Champion Dodgers,” Richard said, before tossing to country superstars Dan & Shay, who performed a set of songs including their massive smash “Tequila.” 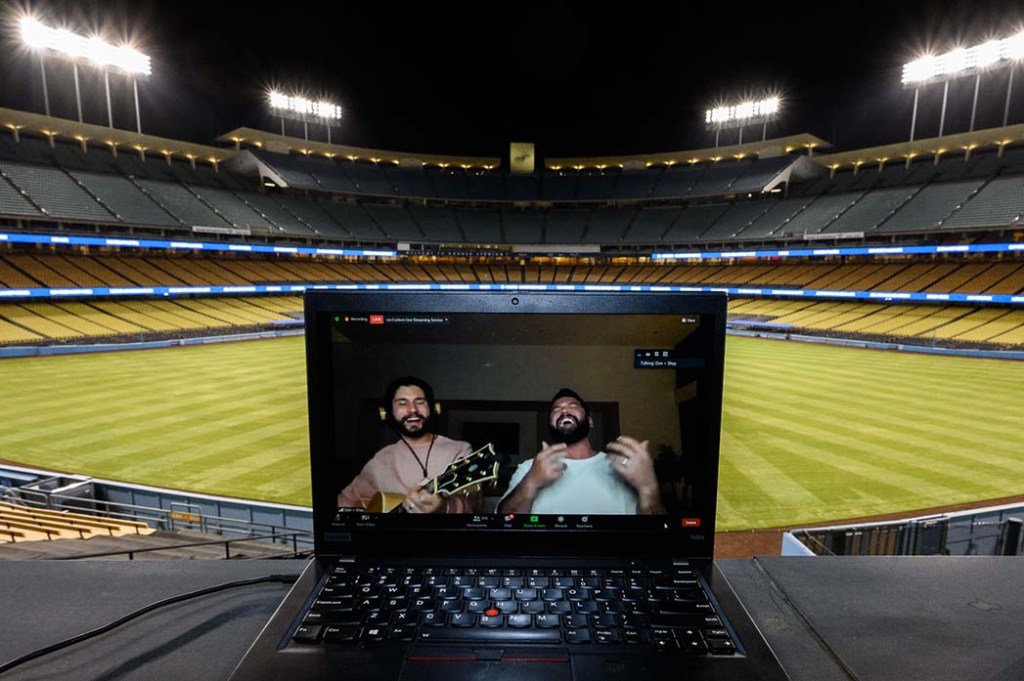 LADF CEO Nichol T. Whiteman then appeared from home with her two sons to share about the work of her organization and how they’ve stepped up during the pandemic to meet the needs of Angelenos in some of the city’s most vulnerable locations. “This past year was full of physical and emotional strain — testing our endurance as a global community. The tremendous success of RWQuarantunes demonstrates the profound impact that we have when we merge our resources and fight for those who often live in the shadows. LADF appreciates each and every supporter whose generosity paves the way for Angelenos to survive these challenging times and emerge even stronger.”

Live auctions are tough to do in a virtual format, but they pulled off a quick one with huge gains thanks to offering a World Series championship ring. The team has yet to receive theirs — a ceremony is coming in April — so bids skyrocketed from $25,000 to $100,000. Due to interest, three rings were sold for $100,000 to Greg Kushner, Emily Greenspan and Yvette Bowser. Other items included signed Dodgers memorabilia and a White Roland grand piano that was played live on the field. 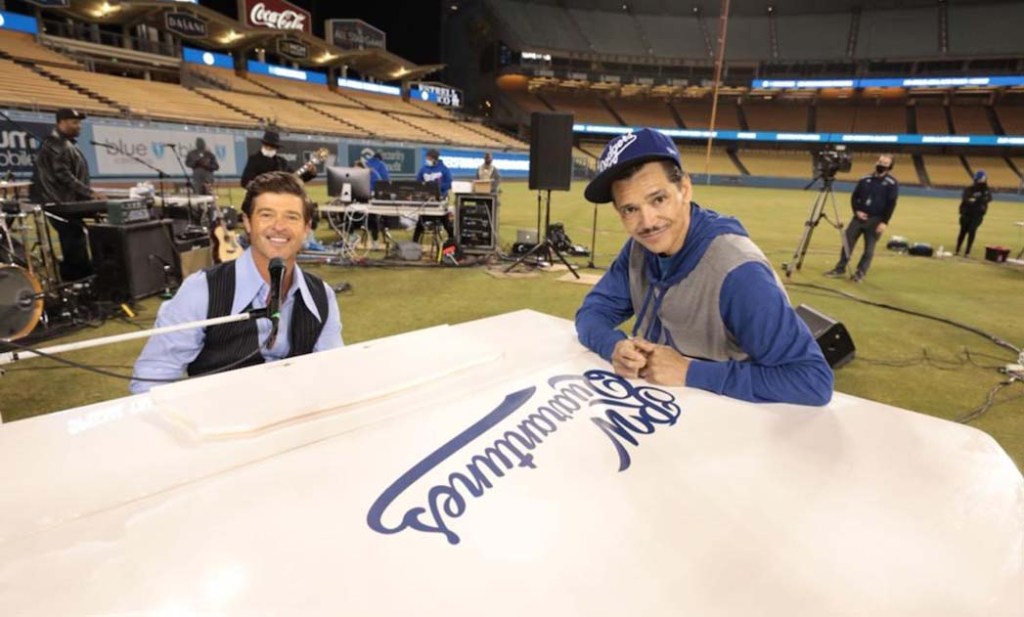 Most of the 3-hour program that followed was saved for entertainment, presented as a combination of live performances from the field as well as the usual Zoom sets. Friday’s show was a heavier lift than most as it involved multiple live hit locations for the Weitzes and DJ Cassidy inside Dodger Stadium as well as live performances on the field. Kerry Brown and his Rolling Live production outfit pulled off the slick production as they’ve helped shepherd many of the RWQuarantunes concert events.

DJ Cassidy returned to introduce the third installment of his Pass the Mic series which has also become a pandemic phenomenon. This one featured R&B and hip-hop superstars including Keith Sweat, SWV, TLC, Shanice, En Vogue, Full Force, Johnny Gill, Bell Biv DeVoe, Bobby Brown, Ralph Tresvant and Boys II Men. Many of those artists also appeared live during the show with some, like Gill, TLC’s Tionne “T-Boz” Watkins and Boys II Men performing snippets of some of their biggest hits.

Thicke and El DeBarge performed a set from the field that included “Rhythm of the Night” as well as tracks from Thicke’s just-released album On Earth, and in Heaven. Other performers included John Ondrasik, best known for his stage name Five for Fighting, Lisa Lisa, Michael Fitzpatrick from Fitz and the Tantrums (debuting tracks from his new album Head Up High), Joe Esposito, and a band featuring members from some iconic rock groups.

Charlie Puth also turned in a performance of “See You Again” for a special in memoriam tribute to the many lives lost during the COVID-19 pandemic. Richard made a special mention of the passing of groundbreaking TV executive-turned-producer Jamie Tarses, who passed away Feb. 1.

“This has been incredible. I started crying earlier on the Dodgers field. This has been the craziest experience of my whole entire life. I want to say a big thank-you to everyone for supporting us,” praised Richard, who then noted that despite the backdrop and the ease with which he has hosted RWQuarantunes for nearly a year, he’s still an agent at heart. “At the end of the day, I’m an agent. I have clients. I do work. This is something to put a smile on everyone’s faces. To have this tonight, even for me, it’s been over the top. It’s about the people who are on here. You have to live every day and every moment because you just never know.” 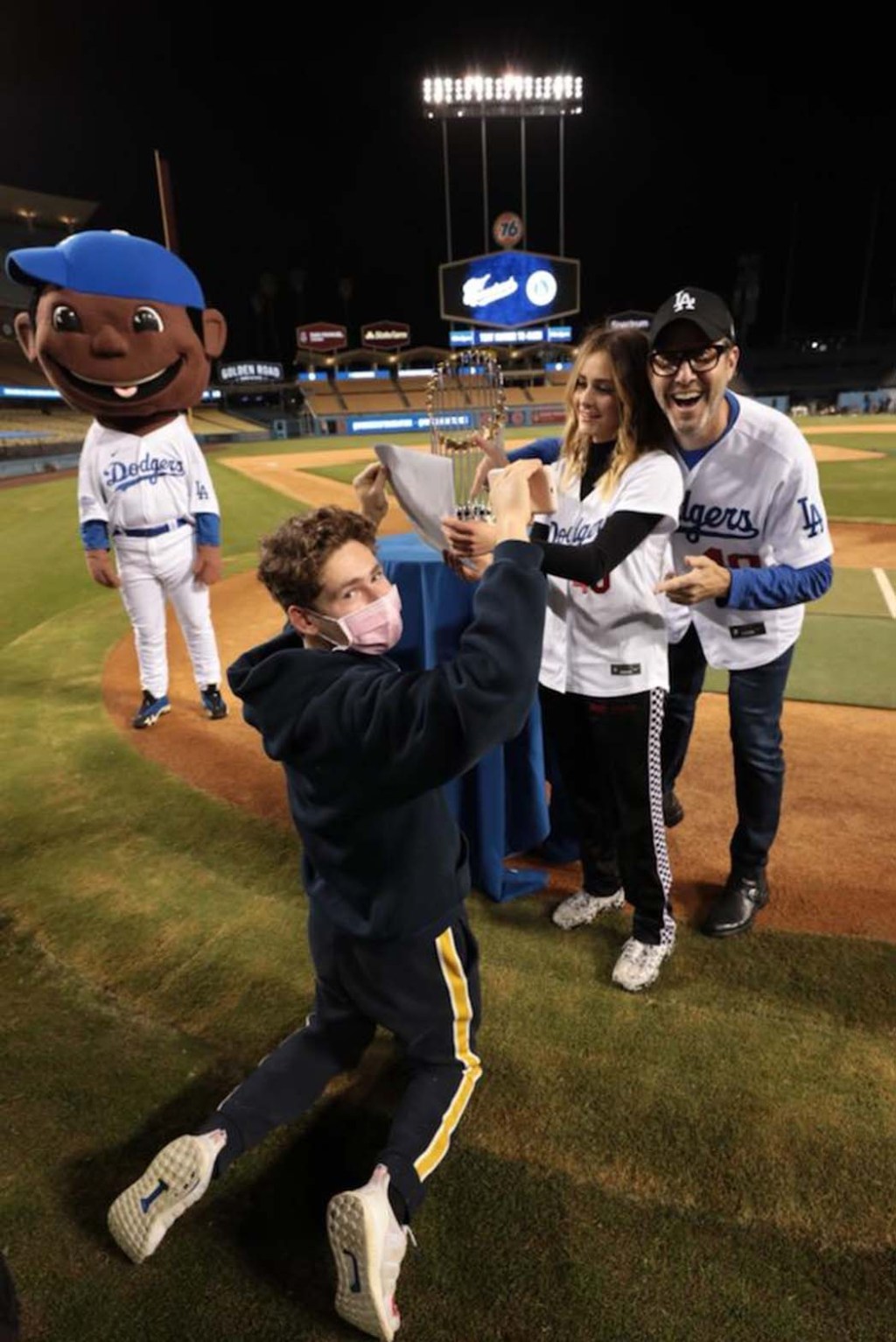 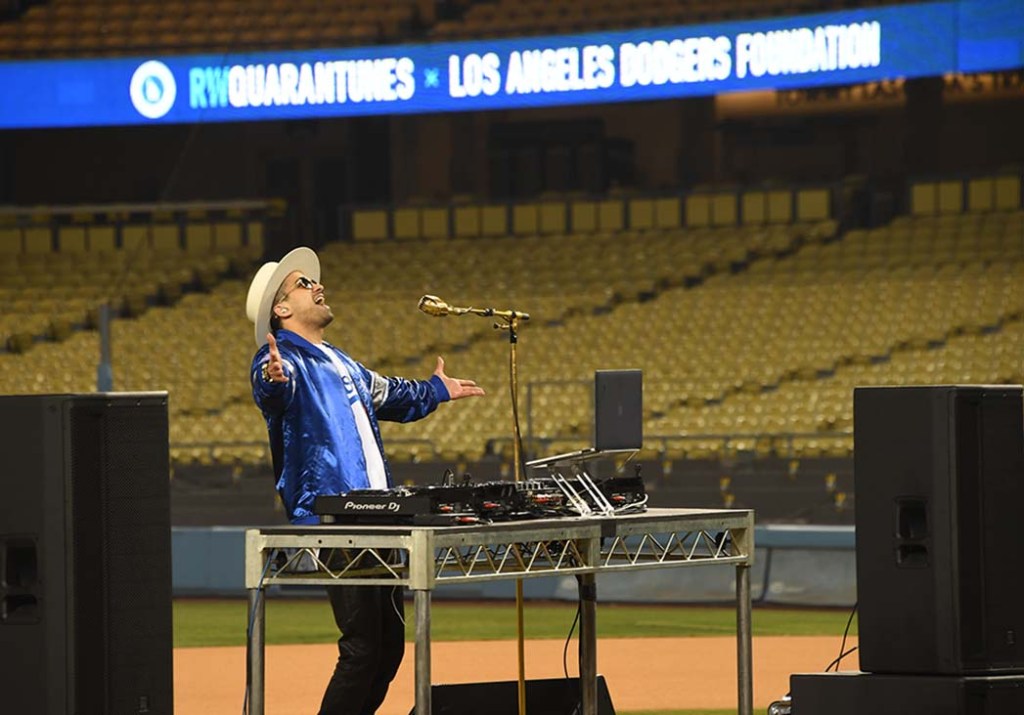