Comcast lost 106,000 cable television subscribers in the most recent quarter while DirecTV shed 346,000 and Charter Communications lost 66,000. With cord-cutting rampant, it’s instructive to know exactly why so many consumers are ditching pay TV in favor of streaming.

The most basic answer is “to save money,” according to a new Hollywood Reporter/Morning Consult poll, though myriad other reasons exist — all of which point to more pain ahead for traditional television.

A whopping 90 percent of Americans say that the most important factor when deciding to subscribe to a TV or streaming service is cost. Meanwhile, 56 percent say cable is “unaffordable” and 47 percent say the same about satellite, while just 17 percent deem streaming unaffordable. “People are just homing in on affordability, especially younger consumers,” says Morning Consult vp Tyler Sinclair.

In 2015, there were 205.4 million subscribers to traditional TV, according to eMarketer, but that will drop to 169.7 million by 2022. If TV executives intend on wooing some of those defectors back, they have their work cut out for them, as the THR/Morning Consult poll indicates that 72 percent of those who have cut the cord have little or no interest in resubscribing.

While 42 percent of Americans say they watch more cable and satellite TV than they watch streaming, the younger the demographic the fewer hours of TV watched in general, be it streaming or traditional, Sinclair notes.

Those who are 18-29 are spending more time with video games, social media and short-form YouTube content, which makes things even trickier for entertainment conglomerates, even those with their own streaming product, like CBS All Access and HBO Now. “Connected activities are drawing younger Americans away from TV experiences,” says Sinclair. 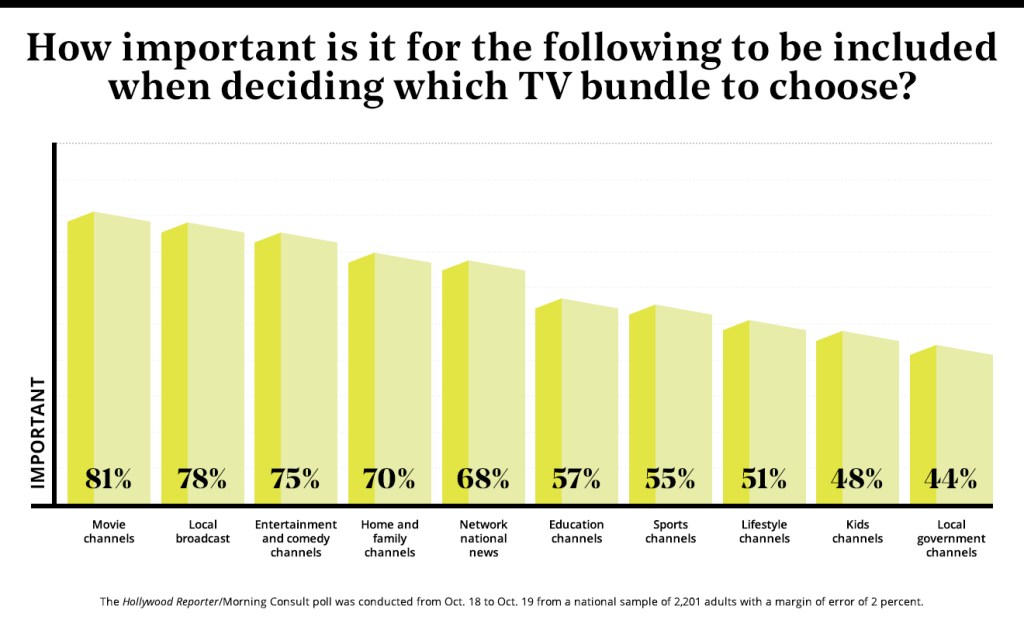 The shift to social media and video games could eventually catch up with Netflix, though that company is currently firing on all cylinders, with 137 million subscribers worldwide. But it already has Amazon and Hulu to contend with and it’s getting more competition from services Walt Disney and WarnerMedia planning to launch next year.

While shares of Netflix have advanced nearly 200 percent in a couple of years, they have recently been falling as debt has soared to more than $10 billion and Wall Street contemplates mounting competition.

“Netflix has been getting slammed as investors finally take notice of the streaming giant’s soaring content costs, which will likely trigger substantial cash burn in the years to come,” says Jess Cohen of Investing.com.

“As Disney and the newly combined AT&T and Time Warner will both be introducing their own streaming services in 2019, investors are waking up to the fact that Netflix will not be the only streaming show in town,” says Cohen.

WarnerMedia and Disney are slowly taking their content away from Netflix in preparation for their competing products, but Sinclair isn’t sure that that is the correct course of action.

“If I’m a Hollywood executive, I want to ensure my content is available across as many platforms and services as possible,” he says.

“It’s too early to say that Disney and WarnerMedia are making a mistake, but it’s very possible a point of saturation is coming where subscribers won’t pay for numerous streaming services to get the content they’re already used to getting now.”

The Hollywood Reporter/Morning Consult poll was conducted from Oct. 18 to Oct. 19 from a national sample of 2,201 adults with a margin of error of 2 percent.