Nearly every day for the past three months — since Joker‘s Oct. 4 opening — fans have been gathering on a grimy outdoor staircase in the Bronx. Often clad in red suits and green wigs, they re-enact one of the film’s most memorable scenes, the one in which Joaquin Phoenix’s Arthur Fleck performs a revelrous dance as he finally emerges as the full-blown Clown Prince of Crime.

“They all told us weeks before anybody saw the movie that it would inspire mass mayhem,” says director Todd Phillips. “Now we realize it’s just inspired people to dance on a staircase in the Bronx.”

The Warner Bros. movie has raked in more than $1 billion at the global box office, becoming the highest-grossing R-rated movie of all time, and collected accolades like the Venice Film Festival’s Golden Lion and four Golden Globe nominations, including best drama. But in the days leading to Joker‘s release, there was enough worry that the film’s violence would inspire copycats that the New York and Los Angeles police departments deployed additional officers to theaters, and family members of the 2012 Aurora theater shooting wrote a letter to Warners asking the studio to lobby for gun reform. “We feel a little bit vindicated, not by the box office, but by people understanding what the movie was about,” Phillips says. “To us, the movie was always about childhood trauma, about lack of love and the loss of empathy. How do you make a guy like Arthur? Where does he come from?” 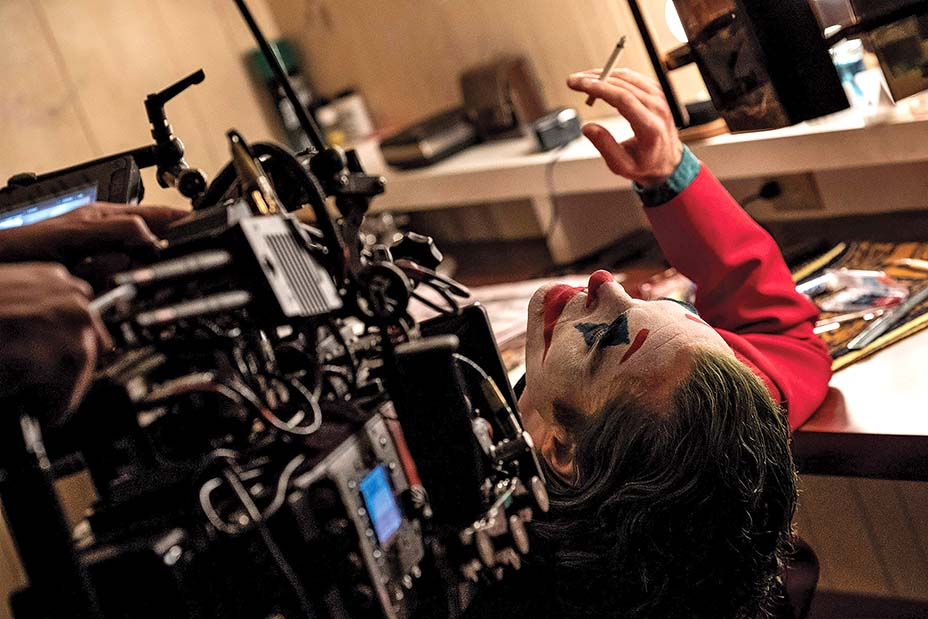 The idea for the film — a $60 million character study focusing on an isolated and bullied professional clown who descends into madness — came to Phillips at the premiere of his 2016 movie, War Dogs, which seemed destined for a lackluster opening. While the director was pacing outside the screening, he looked up and saw a billboard for a comic book movie and surmised that maybe the only way to make the sort of gritty Martin Scorsese-like drama he wanted to was by disguising it as a superhero story (at one point Scorsese was involved as a potential executive producer before he stepped aside to focus on The Irishman, and his longtime producer, Emma Tillinger Koskoff, is a producer on the film). It was obviously an out-of-the-box pitch for a filmmaker most famous for the billion-dollar-grossing Hangover films. And Phillips, 49, who has had a deal at Warners for 15 years, ended up being forced to sell skeptical executives on it twice.

He originally pitched Joker to Warners CEO Kevin Tsujihara and DC executives Jon Berg and Geoff Johns, all of whom left the studio before the movie was finished. “We were off writing for a year and a half a very specific thing that I had pitched to certain executives,” Phillips says. “Then you come back, those executives aren’t there anymore. It was already a bold swing for the original crew to say, ‘OK, let’s explore this.’ It was the same thing for the new people.” 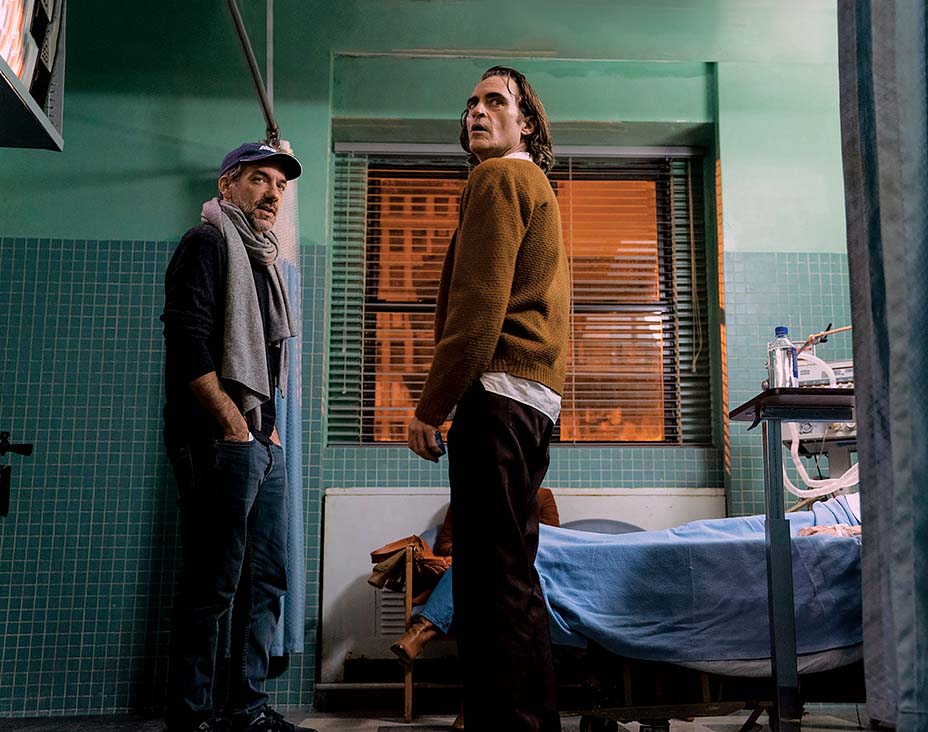 Phillips had Phoenix in mind for the lead from the beginning (despite the fact that Jared Leto, who’d played the character in Suicide Squad, had been waging a behind-the-scenes campaign for the part). “[Phoenix] seemed to me like an agent of chaos, and I really did feel like the person who does take this role on, you have to have that inside,” says Phillips, who jokingly describes the 45-year-old actor as “the tunnel at the end of the light.” For Phoenix, the lure lay in one of the character’s defining traits: a compulsive disorder to laugh. “There was something really interesting about the idea of the laugh being rooted in a real condition and the struggle of that,” says Phoenix.

Before committing to the film, and while the two were discussing the project on a sofa at Phoenix’s Hollywood Hills house, the actor demonstrated for Phillips his attempt at the character’s peculiar, joyless giggle. “The first time he did it was fantastic, like amazing,” Phillips recalls. “But I didn’t want to just be the guy who’s like, ‘Perfect, OK.’ ” Phillips would go on to discuss the character with his ideal lead actor for months, never entirely sure Phoenix would sign on. “I don’t know that he ever formally said yes,” Phillips says. “One day he just showed up at the wardrobe fitting, and it was like, ‘Oh.’ “

Phoenix lost 52 pounds for the role. “We wanted Arthur to feel a little bit wolf-like, feral, this hungry kind of character,” Phillips says. With the film set loosely around 1981, Arthur’s wardrobe was designed to be from an even earlier era, a reflection of his modest means and worldview. “I figure he was somebody who grew up watching whatever the Gotham equivalent of Leave It to Beaver or Father Knows Best was,” Phoenix says. “It’s this idea of a kid who is adopted and has this turbulent childhood and seeks out comfort in the idea of that perfect American family.” Costume designer Mark Bridges, who worked with Phoenix on The Master and Inherent Vice, says he looked for “the kind of things that you would have picked up at the boys department at Sears in the early ’70s. It feels like there was a sort of an arrested development, and so we tried to communicate that.” Bridges and production designer Mark Friedberg found their ideal color palette in a book of muscle cars from the era that inspired the maroon hue of the Joker’s signature suit, which Arthur wears in various pieces throughout the film and which grows brighter as Arthur evolves into the Joker. 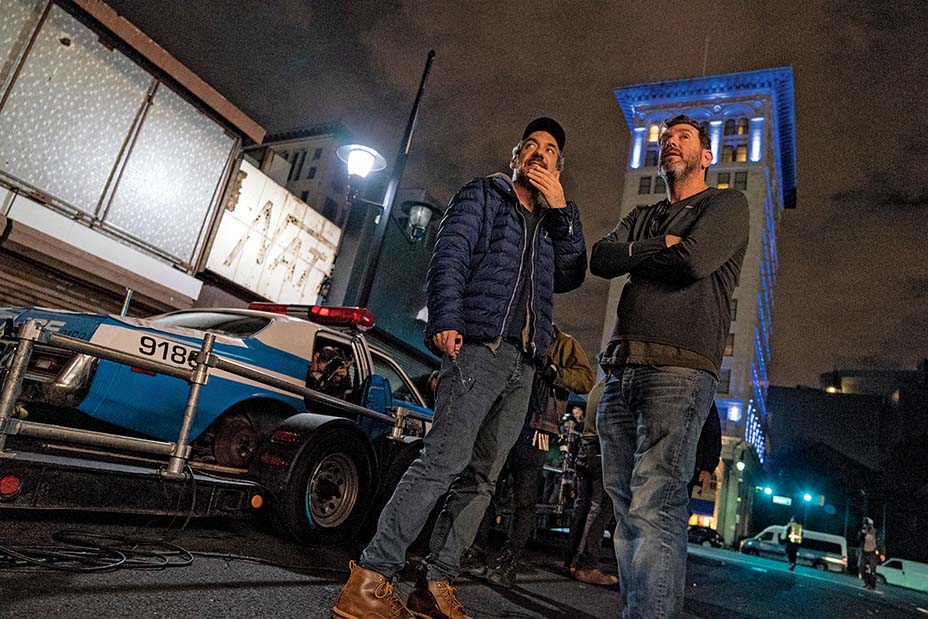 Before shooting began in 2018 in New York City, Phillips told cinematographer Lawrence Sher that he wanted Joker to feel “handmade.” “It just meant that the movie can never get too technical, too fancy, too self-conscious, too polished,” Sher says. “It needs to feel like there are human beings behind the camera making this film and not committees and not machinery and not technology.” Still, they did use the camera to communicate a point of view — in the beginning of the movie, in scenes where Arthur is riding the bus and holding a sign on a Gotham street, Sher shot with a long lens. “It’s there to help to see him as the world sees him, as an invisible character in the midst of a lot of other people,” Sher says.

During shooting, the crew sometimes played pieces of the score to set the mood, an unusual privilege made possible by the fact that early on Phillips had sent the script to Hildur Gudnadóttir, an Icelandic composer and cellist whose work he had heard on Sicario: Day of the Soldado. “It was almost like being punched in the chest,” Gudnadóttir says of reading the script and sitting down to compose a theme for Arthur. “It was like something inside me shouted, ‘This is what he wants to say.’ ” The crew sent finished scenes back to Gudnadóttir, who was creating her full score in parallel with the production. “It was incredibly powerful to be able to have this dialogue without any words,” she says. “It was like each element was growing together.”

Working on the streets of New York brought its own drama, particularly on the day the crew was shooting that dance scene on the Bronx staircase. Phoenix had prepared for the sequence by working with choreographer Michael Arnold and writing in a journal he kept as Arthur, filling multiple notebooks with jokes and doodles (which would be used in the film). “I wanted this feeling of somebody who is suddenly flooded with thoughts that he’s trying to get out,” Phoenix says of the journal. “I would just start writing as quickly as possible using my left hand.”

Despite efforts to keep the production quiet, word that a movie was filming in the Bronx got out to neighborhood kids and the media. “We go there, and there’s a bunch of paparazzi and there’s kids in the apartments next door banging on the window,” says Phoenix. “What I remember was trying to keep my head down and focused and not become self-conscious with kids screaming and cursing at me.” Imagery leaked on the internet, but no one in the crew knew the scene would be become one of the year’s big cinematic moments. “Sometimes those scenes are less about, ‘Oh my God, this is going to be iconic,’ ” says Sher, “and more about, ‘We have two hours. Holy shit, let’s make sure Joaquin doesn’t slip on those stairs.’ “

To signal to audiences that this was not a kids’ movie, Warners selected a fall release date outside the family moviegoing windows of summer and holidays and chose not to link consumer products to the film, instead pitching Joker as a sophisticated, awards-worthy drama. The result was successful enough that talk of a follow-up has begun to swirl. “Warners has clearly expressed interest in doing a sequel, [and] Joaquin and I loved working together. And even more than that we loved this character so much,” Phillips says. “That part of us is like, ‘Yeah, it could be something.’ “