You’ll never hear Noah Baumbach shouting “action” on a film set. Instead, he’ll start a scene by quietly whispering the words “when you’re ready” or — even more softly — “begin.”

“I find if we can almost eliminate that line between when we’re shooting and when we’re not, it makes it more naturalistic,” says the famously meticulous 50-year-old director.

Of course, there’s never been much of a dividing line between Baumbach’s real life and his onscreen one. His 1995 directorial debut, Kicking and Screaming, was inspired by his own post-college malaise; he revisited the trauma of his parents’ divorce in his 2005 film The Squid and the Whale (Jeff Daniels even wore Baumbach’s father’s clothes); and with 2014’s While We’re Young, a 40-something Baumbach explored his fear of aging. And now his latest, Marriage Story, not only took a little inspiration from Baumbach’s own 2010 divorce from actress Jennifer Jason Leigh, but also pulled from the stories his friends and family told him about their own experiences with love and heartbreak. 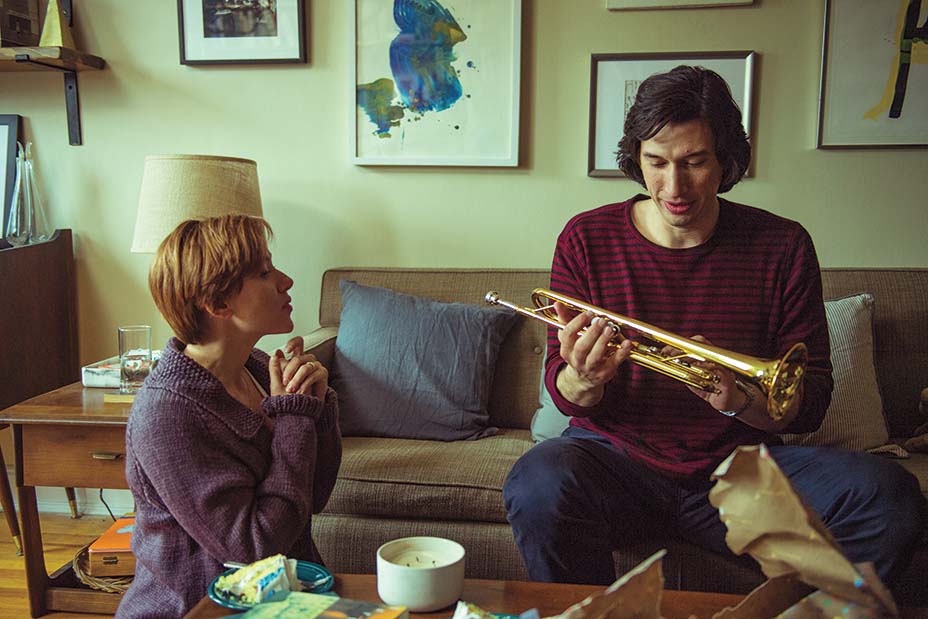 The story centers on a married couple, a New York-based director named Charlie (Adam Driver) and an actress named Nicole (Scarlett Johansson), who are un-amicably decoupling amid explosive fights, bloodthirsty lawyers and a bitter transcontinental custody battle. “I discovered in doing a story that was, on one level, about divorce could actually be a way to do a love story,” says Baumbach.

The director says the idea of making the film had “been percolating in the back of my head” for several years. But it wasn’t until 2016, while in postproduction on The Meyerowitz Stories — his Netflix film about siblings struggling to survive artistically successful parents; Baumbach’s own dad was a novelist and his mom a Village Voice critic — that he decided in earnest to make his “love story about divorce.” And although Baumbach drew from his own personal history, he also spent months researching the subject, talking to divorce lawyers, judges, mediators — even querying friends about their experiences with broken marriages. “When put in an interview situation, they revealed things that I didn’t know about at the time,” he says. “I think divorce brings up these feelings of failure and shame.” 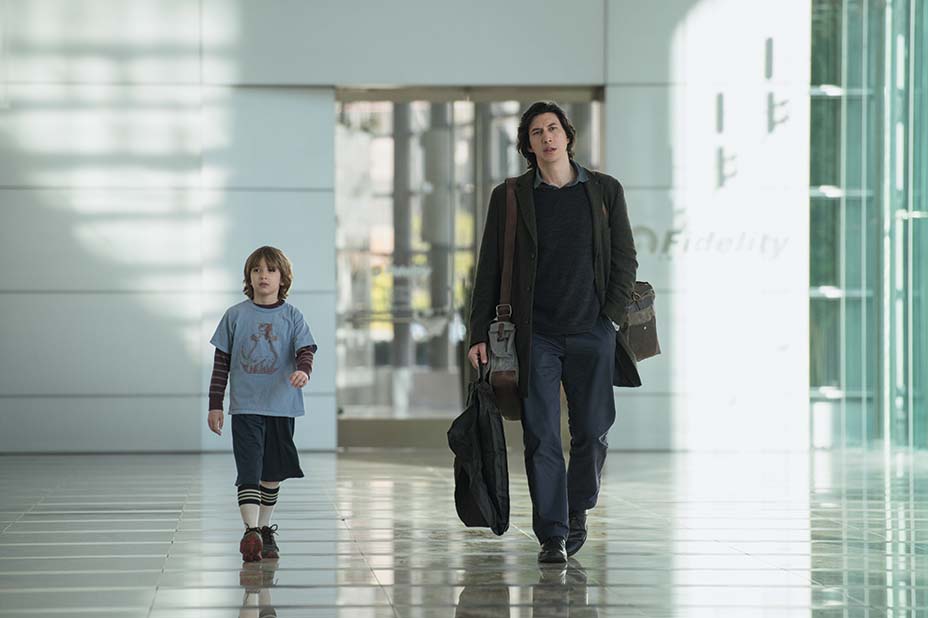 Baumbach decided early on, even as he was writing the script, that Driver, who had already acted in three of his movies — as a lead in While We’re Young and in smaller roles in Frances Ha and Meyerowitz Stories — would play Charlie. The two New Yorkers spent many dinners hashing out details of the main characters. It was Driver, who is married to actress Joanne Tucker but also a child of divorce, who suggested that Charlie should be a theater director. “It was a long conversation, over a course of months, that started in a restaurant and basically just changed locations to a film set,” says the 35-year-old actor.

Johansson, 34, also came aboard very early. When Baumbach found out at their first lunch in 2017 — while she was in the middle of a 10-month back-to-back shoot on Avengers: Infinity War and Endgame — that Johansson was going through her second divorce (from French journalist and art curator Romain Dauriac), he wasn’t so sure she’d be interested in the job. “I was like, ‘So you’re either going to love or hate this,’ ” says Baumbach. As it turned out, digging into her own emotional baggage was exactly what she was in the mood for after hanging out with Iron Man and Thor. “There’s a lot of physical stamina required to shoot 10 months of that kind of work,” says Johansson. “One thing that kept me going was knowing that I had something that was going to be challenging in a different kind of way, where I felt like I was able to use a different kind of muscle. Not just, like, my biceps.”

Like Baumbach, some of the actors took deep dives into preproduction research. Laura Dern, for instance — yet another early hire, cast as Nicole’s fiercely aggressive lawyer — met with several real divorce attorneys, including Laura Wasser, whose clients have included Christina Aguilera, Johnny Depp and Ashton Kutcher. “She’s one of the great powerhouses,” says Dern. “Despite empathy and heartfelt intent — and I think Laura is an example of this — the business of divorce is the business of winning for your team.” Ray Liotta, who plays Charlie’s lawyer (after Charlie fires a sweeter but slightly bumbling attorney played by Alan Alda), reached out to an industry heavyweight — although with less luck. “I tried to get in touch with Martin Singer because from what I’ve read about him, he has big brass, you know, knuckles,” Liotta says. Singer was dealing with a client emergency, however, and never got around to meeting with the actor. “By that time, I didn’t need to talk to the guy,” Liotta says. “If you read the New York Post you really see how F-upped it can get between ex-husbands and ex-wives.” 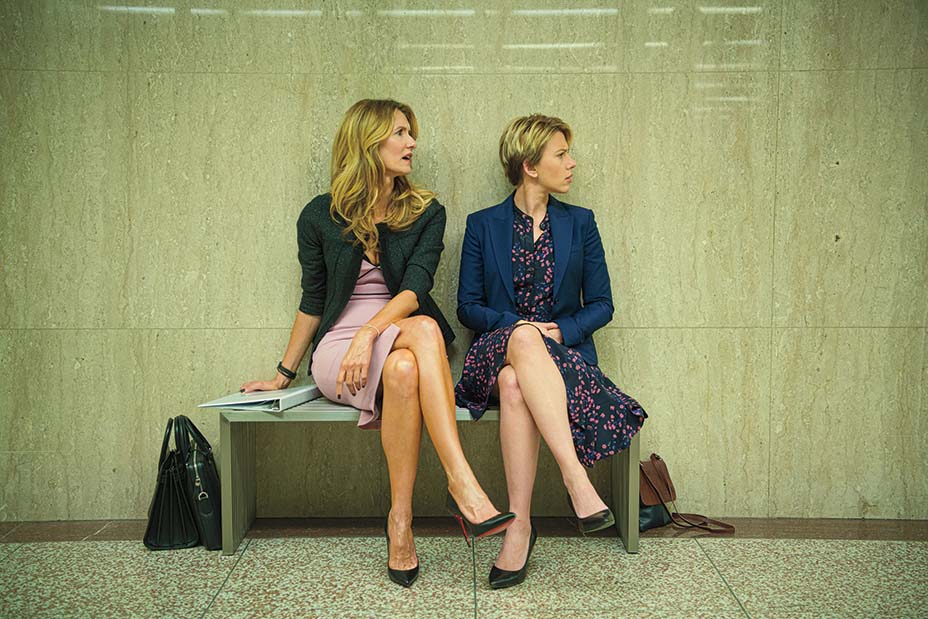 Baumbach finished his script in late 2017 and took it to London to present to British producer David Heyman, who made the Harry Potter films and Gravity. The two had never worked together before but had met several years ago, when Baumbach was in London doing script revisions for Wes Anderson on Fantastic Mr. Fox. “It’s a beautiful piece of writing,” says Heyman. “What I loved about it was that it was a love story. No matter how hard they went at it, you still never question the love that they have for one another.”

Heyman and Baumbach presented the package to a number of studios, and while there was interest from several (including, reportedly, Amazon), Netflix had an edge. Although Baumbach was once skeptical of streamers — he’d long been a vocal supporter of the big-screen theatrical experience — he’d had a good experience on Meyerowitz Stories and was open to reteaming. Especially since this time Netflix offered Marriage Story its longest-ever theatrical window — a full four weeks (beginning Nov. 6). According to Heyman, Netflix’s Scott Stuber gave them “everything we wanted.”

With the $18 million budget in place, Baumbach set out to bring his script to life with his usual obsessive attention to detail. “Noah is relentless in pushing, pushing, pushing,” says Heyman. He tasked production designer Jade Healy with finding the absolutely perfect New York bar for a scene where Charlie sings “Being Alive” as well as the ideal Los Angeles house where Nicole’s mother (Julie Hagerty) lives. “You hear stories that he’s meticulous,” says Healy, who was working with Baumbach for the first time. “But he just wants it to be exact. If you bring him a prop, like a legal document, you better make sure you’ve triple-checked that it’s exactly what it should be, because he will check and he will know. You can’t fake it. He doesn’t want 555 phone numbers. He does not want any of that stuff. He really wants it to feel real.” 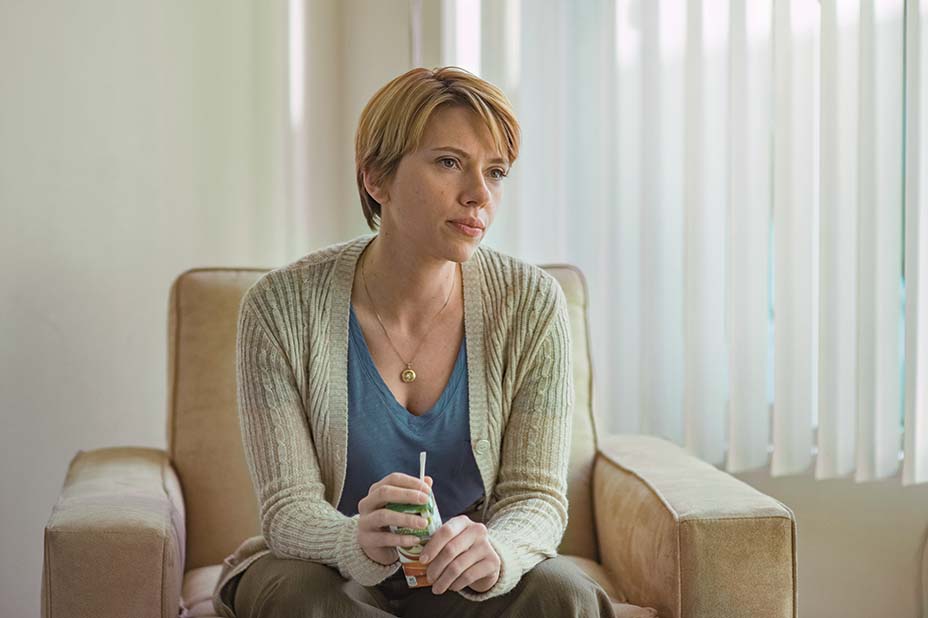 Despite Baumbach’s super-detailed prep — or maybe because of it — the 47-day production, beginning in January 2018, went mostly without a hitch. Except for one: The perfect location in Los Angeles fell through. “Noah had been in love with this house for months and months, and then two weeks before we shot, the city wouldn’t permit it,” says Healy. Baumbach was forced to shoot the scene in which Nicole enlists her sister (Merritt Wever) to serve Charlie with divorce papers in a slightly less ideal setting. Somehow, though, he made it work. “I felt it put me in the position that Charlie was in, which was being uncomfortable in a space that I hadn’t planned to be,” Baumbach explains.

For the actors, Baumbach’s meticulousness had its own challenges. Every camera placement, every step in the choreography and especially every word of dialogue was plotted and executed with Swiss clock-like precision. “He just wants every single word that he’s written, like ‘them’ is not ‘they’ even though in context it would work,” says Liotta. “He is fanatical, but the unbelievable part of it is he’s so calm about it. He just does not rattle.”

He does, however, ask for many, many takes. “You never know when some things that you would think may be kind of benign, he’ll just needle for hours over that — and at some point you are so broken down because you’ve tried what you imagine as every possible way, but he won’t let go,” says Johansson of Baumbach’s sometimes Kubrickian directing style. “I guess it could be perceived as a kind of neurosis, but it’s a vision, an artistic vision.”

For one of the film’s most explosive moments, an 11-page scene in which Charlie and Nicole reunite hoping to have an honest talk without their lawyers but which quickly escalates into a blow-out argument, Baumbach, Driver and Johansson rehearsed for several days, blocking out their movements. They filmed it for two days, doing dozens of long takes that pushed them to their limits. Says Johansson, “Noah is relentless. He got us each a bottle of wine after that scene, which I probably immediately uncorked.” Driver says it was “exhausting” as well, although it turned out he could be just as meticulous as his director. “For Adam to say, ‘I might try this take and cross my legs,’ that’s a big thing,” says Baumbach. “It changes so much.” 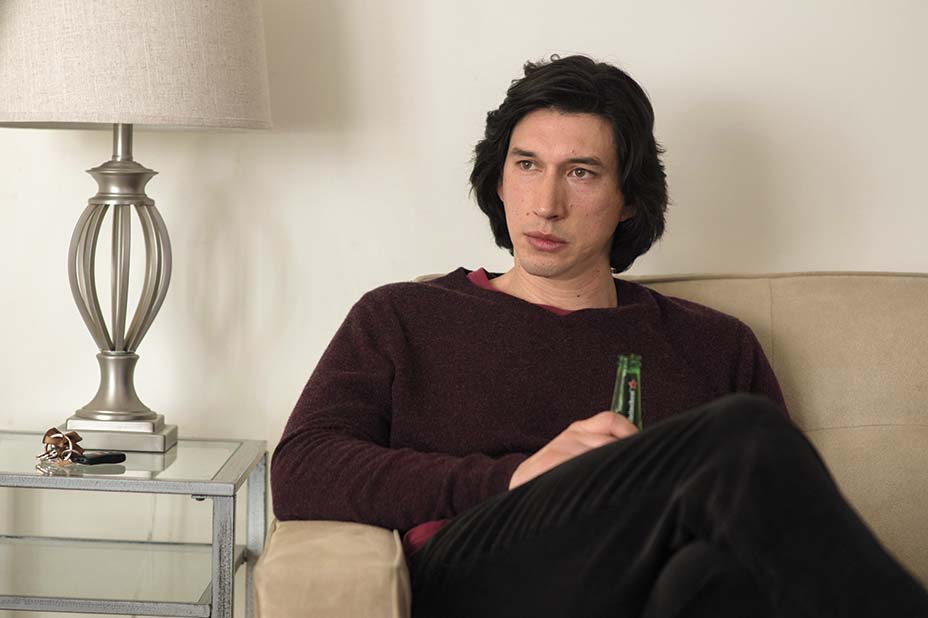 Because he shoots so many takes, there were truckloads of footage to work with in the editing room. “There’s so much material, I feel like one could get lost in it,” says Baumbach’s longtime editor Jennifer Lame, who started working on the film before a single frame had been shot, spending hours with the director breaking down the script shot by shot. “But what’s so fun about Noah and our process is that we talk about the movie and the characters and the story so much that when I go through the 50 takes, I know exactly what’s right. I’m like, ‘Oh, there she is — there’s Nicole.’ “

Nevertheless, splicing together the 136-minute film was — like everything else in a Baumbach production — a painstakingly precise process. “I’ve never seen anything quite like it,” says Heyman. “He begins at the beginning and he’ll go forward, and then he’ll go back to the beginning — he doesn’t go to the end. It’s one step forward, one step back, two steps forward, two steps back.”

There was a world where the film could have been finished in time for 2018’s fall festivals, but once they pushed past that deadline, “we really pressured ourselves to take breaks,” says Lame. Even after the editing was mostly complete, they decided to take yet another step back, spending a couple of months just sitting with their cut. “There is something about living with something,” says Lame.

The film premiered at the Venice Film Festival on Aug. 29 — well ahead of its its theatrical bow and Dec. 6 Netflix debut — garnering terrific reviews (“Baumbach’s best yet,” raved THR). But perhaps the greatest compliment the film has received so far came from someone who normally can’t stand to watch Baumbach’s movies — Baumbach.

“Usually, I don’t look at [my films],” says the director. “But I can watch this movie in ways that I have not been able to watch previous ones. Watching the actors feels cathartic for me. It feels outside of me in a great way.”

A version of this story first appeared in the Oct. 30 issue of The Hollywood Reporter magazine. To receive the magazine, click here to subscribe.