For the opening of his new heist thriller Widows — a car chase sequence in which a band of robbers flees the Chicago police — longtime art house director Steve McQueen knew he wanted to try something different. Typically, those types of scenes are broken down into dozens of setups and filmed from multiple angles — “coverage” — and then spliced together in the editing room. But McQueen didn’t want any of what was known to his editor, Joe Walker, as “the C-word.” He wanted to shoot the chase from inside the van with a single camera. What’s more, he wanted to end the scene with the robber’s explosive-laden van careening into a warehouse and blowing up indoors.

“It was kind of illuminating [asking] the stuntpeople and stunt coordinator, ‘What happens if we do an explosion inside?’ ” McQueen recalls of laying out his vision of the sequence for his crew. “To see them look at you, tilting their heads to one side, like, ‘I’ve never done that before.’ ”

Even while making his most mainstream movie yet, the 49-year-old Turner Prize-winning artist turned Oscar-winning director (2013’s 12 Years a Slave) can’t help but subvert formulas. On one level, Widows is a by-the-numbers genre piece about four women who — after their thieving husbands die in a botched robbery — decide to carry on the family tradition by cooking up their own heist. On another, it’s a $40 million movie about social justice, poverty, class and sexism whose diverse ensemble includes Viola Davis, Liam Neeson, Michelle Rodriguez, Elizabeth Debicki, Colin Farrell and Robert Duvall. 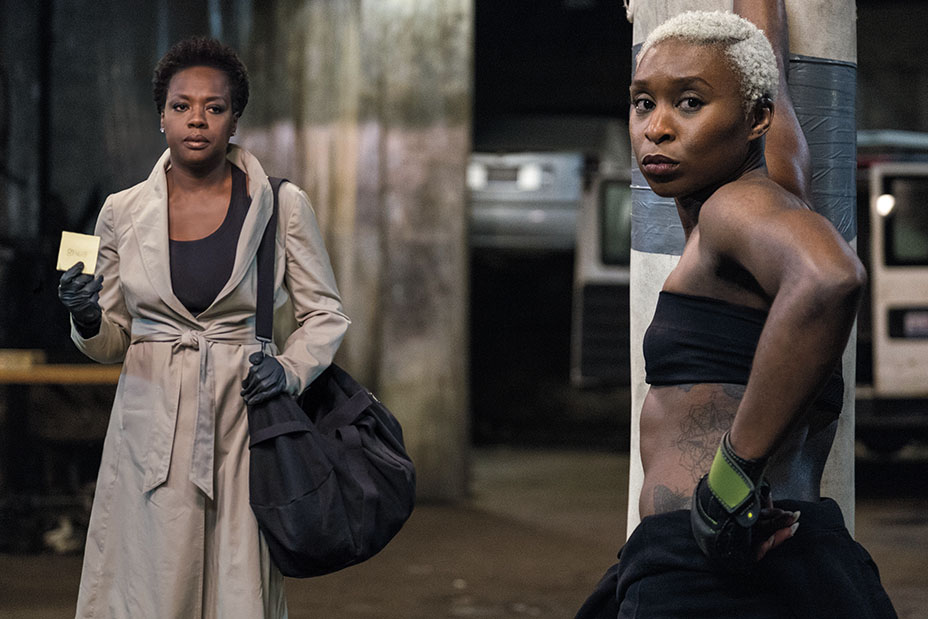 Widows, as it happens, had been made once before; an ITV miniseries based on Lynda La Plante’s 1983 novel ran in Britain until 1985. McQueen was a big fan. As a shy, dyslexic, lower-class teenager of color, he related to how the four main characters at the center of the story were frequently underestimated because of their identity. But it took another 30 years — during which time McQueen defied underestimation by becoming the darling of the London art scene in the 1990s and then went on to launch his filmmaking career with 2008’s critically acclaimed Irish hunger-strike drama Hunger — before he started thinking about remaking the story himself.

Around 2010, he began noodling around with an updated adaptation that would hit all the beats of a blockbuster but also deal with racism and sexism — and especially racism and sexism toward women of a certain age. “I was first coming around to these great actresses who, if they were males, they would be getting these amazing roles,” he says. Early on, he also decided to move the story’s London location, which he felt no longer worked for a heist picture. At the time, Chicago was starting to make headlines for gun crime and police shootings. 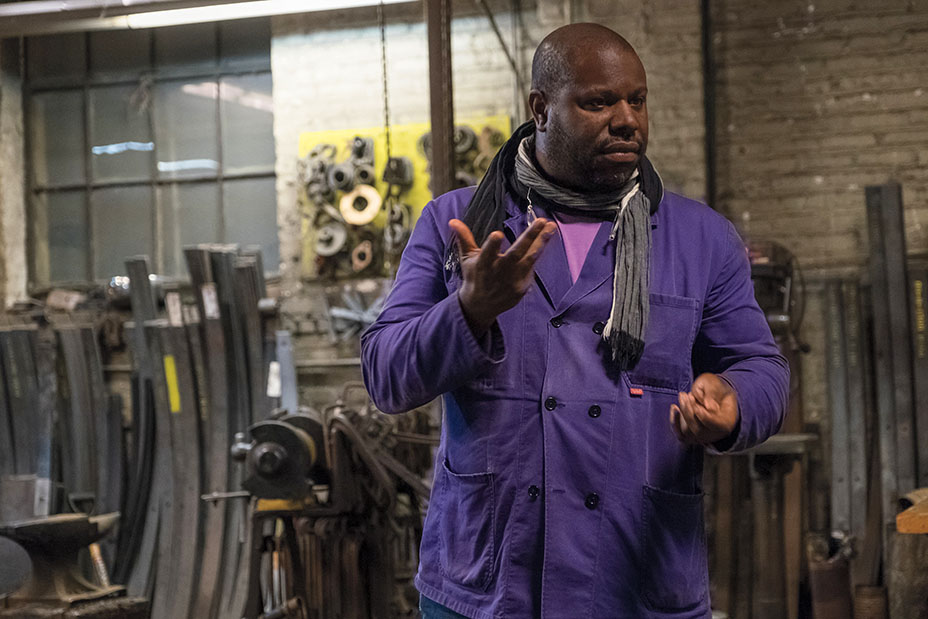 Those ideas, though, were put on the back burner while McQueen went on to make his breakthrough Civil War-era drama, 12 Years a Slave. It wasn’t until a chance meeting in 2014, at a Dramatic Arts Reception party at Buckingham Palace, where McQueen ran into Widows author La Plante, that the feature really started to come into focus. McQueen told La Plante his ideas for a more politically charged adaptation, and she directed him to Disney, which owned the rights to her book. New Regency, which was sold on the idea of making McQueen’s version of the film, acquired the rights from Disney, and McQueen was finally ready to start actually putting his ideas on paper. Except he needed some help.

At the time, McQueen had his hands full putting together a six-part limited series for HBO called Codes of Conduct, but he began scouting for co-writers who could work on Widows with him (just as he had co-writers on all his previous films). The one he hired was Gone Girl author Gillian Flynn, a Chicago resident, who pitched McQueen over dinner in New York. Her vision for the movie — a story that explored the massive class disparities and ethnic bubbles that define the city of Chicago — dovetailed neatly with the director’s. “I wanted that feeling that you could live in a city your entire life and never meet anyone who wasn’t like you,” she says, describing the movie as a “dirty Valentine to Chicago.”

As Flynn and McQueen were working together, though, the director suffered a rare setback: HBO scrapped Codes of Conduct, a drama about a mysterious African-American man who becomes part of New York high society, after the completion of only one episode (the pilot, which has never aired). “I’ve always done what I wanted to do,” McQueen says of the rejection. “The first time ever someone stopped me doing what I wanted to do was that HBO series.” But his producer on Codes of Conduct, as well as on Widows, thinks the cancellation was a blessing in disguise. 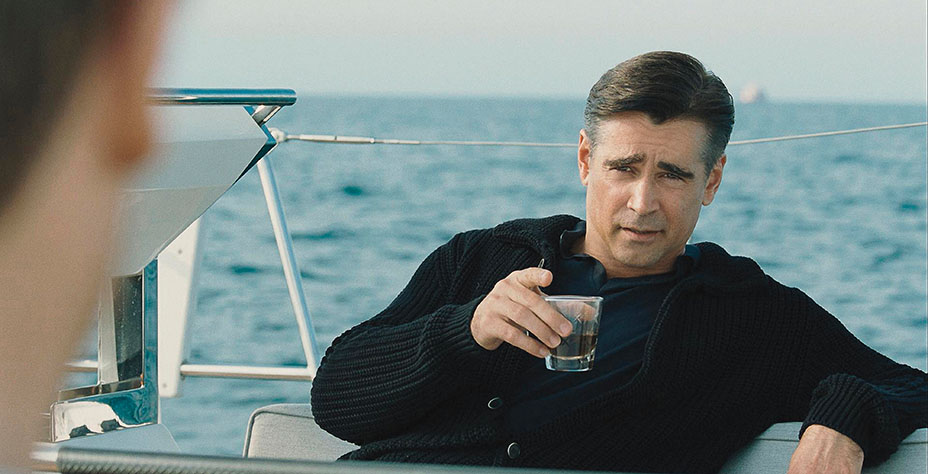 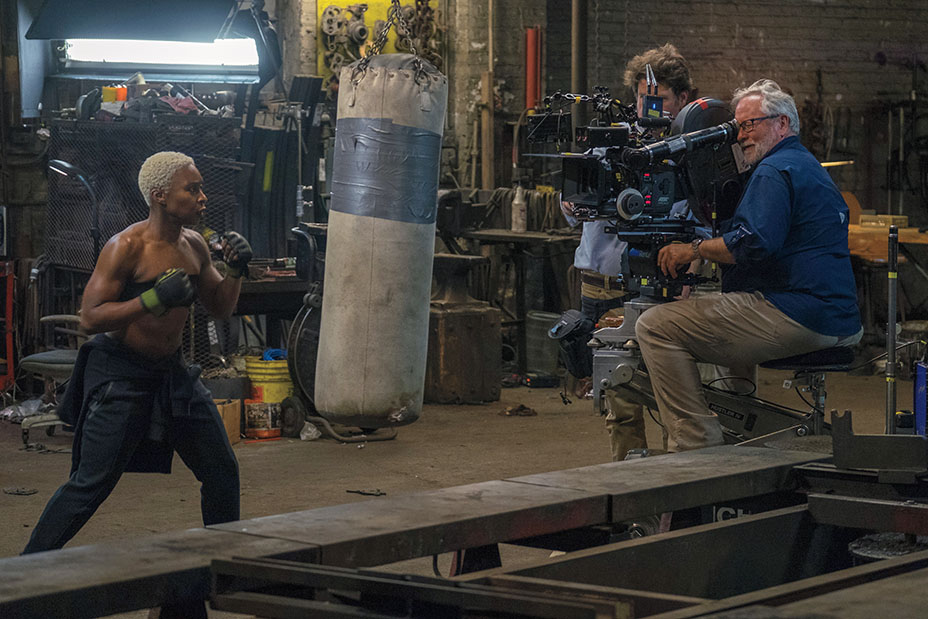 “In some ways it was good for Widows that that show didn’t happen,” says Iain Canning. “In the end, we probably were a year ahead of where we should be now based on not making the show.” With time on his hands, McQueen threw himself into writing Widows with Flynn, with the two communicating mostly via phone and email. Occasionally, though, McQueen would fly to Chicago for inspiration. Flynn would drive him around the city, showing him the disparate neighborhoods, talking about movies and sometimes interviewing local police and FBI agents.

Once the screenplay was hammered out, McQueen began casting. In the past, the director has based his major hiring decisions more on meetings and personal impressions than on auditions. And for Widows, he did some of that, casting Davis and Cynthia Erivo after informal chats. But when Jennifer Lawrence turned down the part of Alice, a young white woman who learns self-reliance after her overbearing husband is blown up, McQueen did hold an audition. Australian actress Debicki (The Man From U.N.C.L.E, Guardians of the Galaxy 2) landed the part. The only other casting hiccup was with Rodriguez. He remembers hearing that the actress was “difficult” to work with but sent her the script anyway. “In life, never ever take other people’s word for it — find out yourself,” he says. And what he found out was that Rodriguez didn’t want to play the role, at least not initially. McQueen had to convince her during a one-on-one meeting. “We got on like a house on fire,” he says. 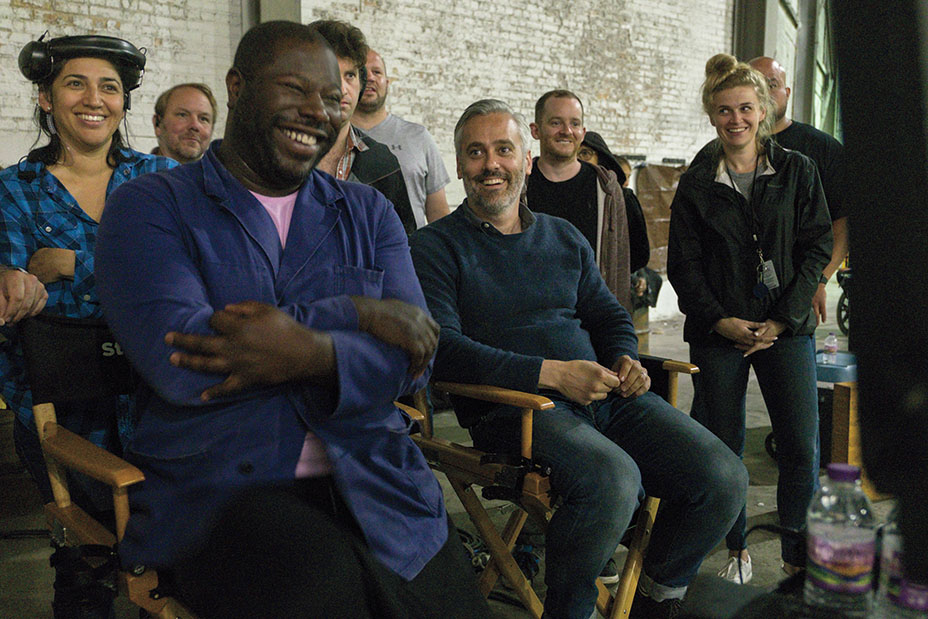 Weeks before the 60-day shoot began in May 2017, the director, along with production designer Adam Stockhausen and cinematographer Sean Bobbitt, met in Chicago to brainstorm their visual approach to the story. The main challenge, according to Bobbitt, was “to take a known genre — a heist thriller — and turn it into something else.” As they drove around the city, they began to envision one specific shot that could drive their sociopolitical point home. Says Bobbitt, “[We wanted to] literally move a character from a poor area to a rich area and try to do that in one continuous shot so it emphasized just how close those two extremes are physically in the world of Chicago.” It wasn’t difficult to find such a spot in the city, and the scene they ended up filming follows a car along an eight-block course that takes it from 47th Street to a tony Hyde Park mansion. Special camera rigging on the car allows viewers to focus on the changing scenery as the characters roll through the city. “A lot of effort goes into a shot like that,” notes Bobbitt. 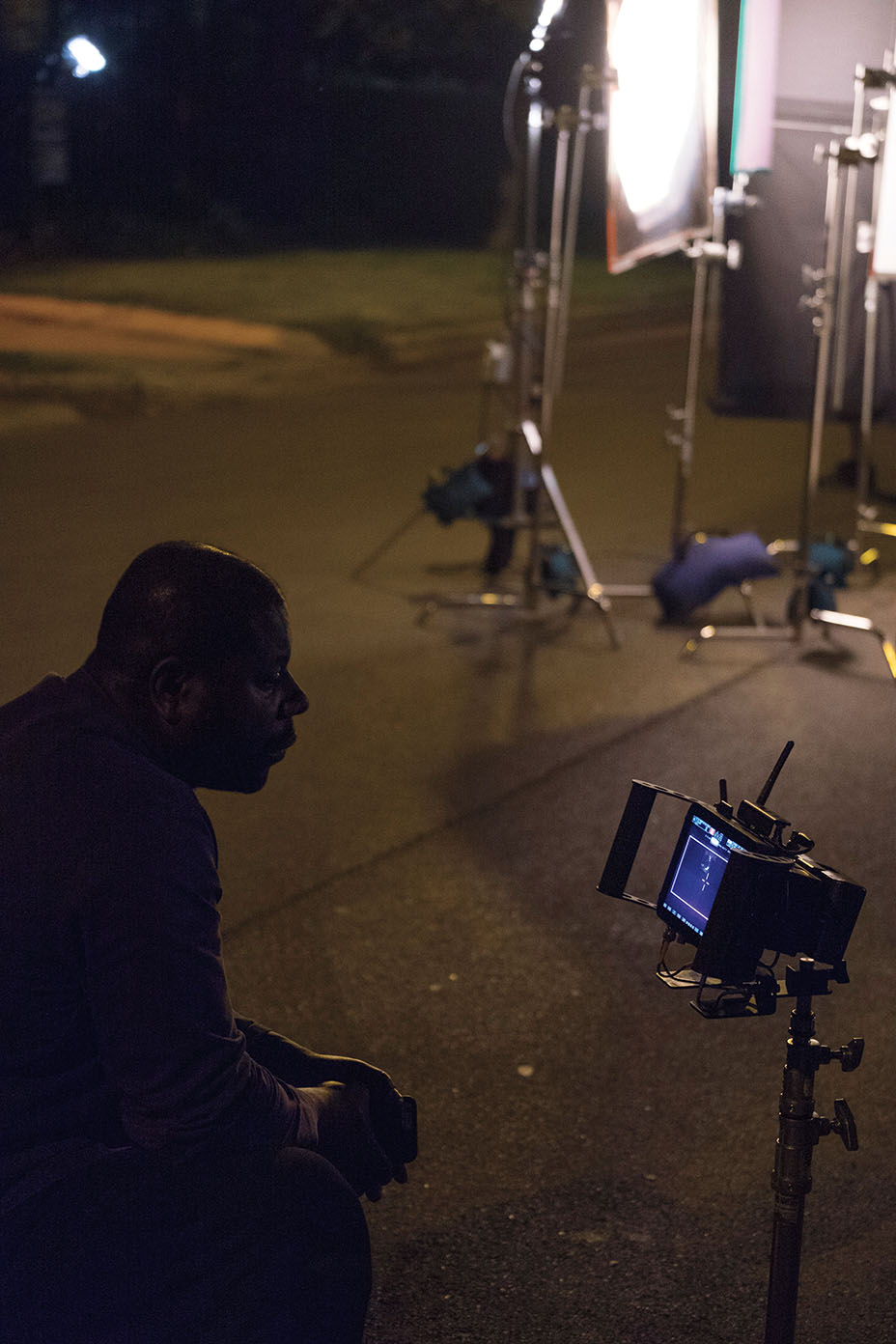 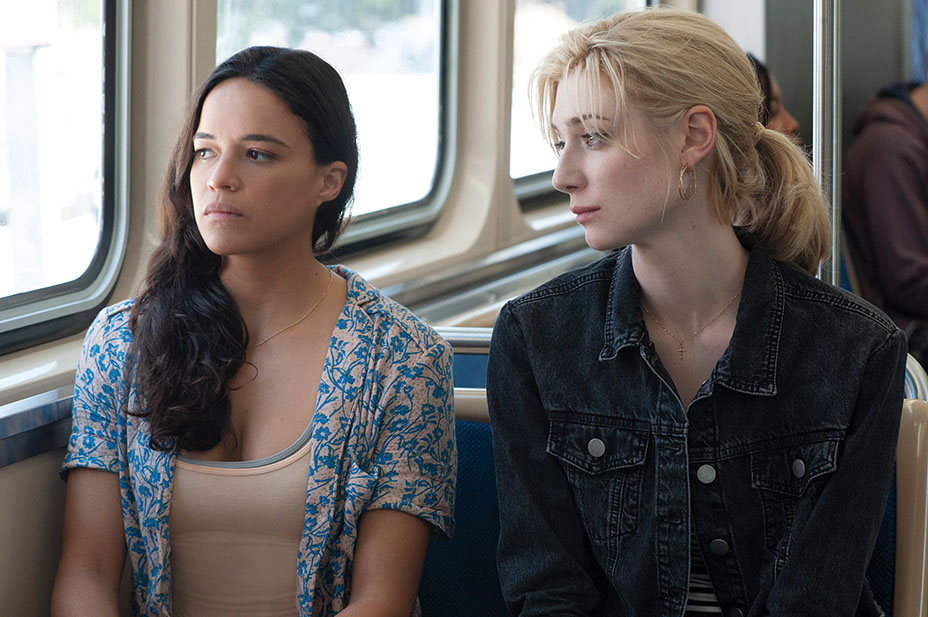 Despite the sometimes heavy material, the mood on the set was mostly light. During night shoots, Rodriguez would keep the energy levels high by DJing on the set. There was one mishap — a grip broke his leg after getting clipped by a car — but otherwise it was an entirely pleasant experience. Even Chicago weather cooperated, with sunny skies throughout almost the entire shoot. “It was like skipping to school every day,” McQueen says.

Postproduction, however, was more like a long, challenging marathon. With four central characters and 81 speaking parts, editing the picture was a “complicated jigsaw,” says McQueen’s longtime editor, Walker. And because it was McQueen, some of the choices were unconventional. Most thrillers, for instance, keep a steady if not unrelenting pace in order to juice up the suspense. With Widows, though, McQueen and Walker decided on lots of weighted pauses and blank moments, slowing scenes down rather than speeding them up. In at least one spot in the original cut, an entire line of dialogue was reduced to a single meaningful glance. “Sometimes you have to sacrifice great stuff for another gain,” says Walker. 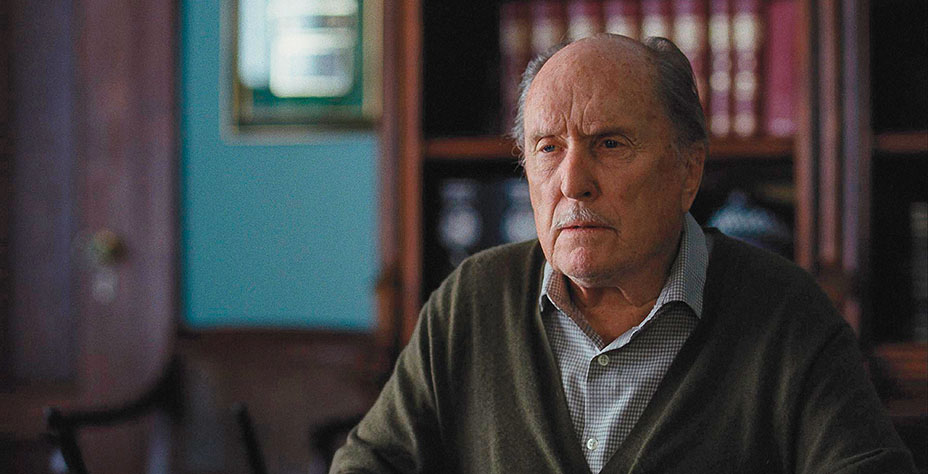 The Fox film premiered at the Toronto Film Festival on Sept. 8, and although it didn’t win any prizes — it was nominated for People’s Choice — the response was nearly universally positive, as have been the reviews (the film opens wide Nov. 16). About the only person who didn’t have a great time at the Toronto screening, it turns out, was McQueen, who found the audience’s gasping and cheering during the movie a little disruptive. “I didn’t really enjoy it,” he confesses. “I was distracted by people talking.”