According to Hilton & Hyland agent Chad Rogers, the summer rental season in Malibu is a “frenzy,” with people itching for a change of scenery after months of shelter-at-home orders. He’s seeing potential renters battling for leases, and homeowners who “really weren’t thinking about leasing [out their properties but] have decided to take advantage of these really high rates that are even over market value,” says Rogers.

Just two rentals remain in the guard-gated Malibu Colony, where current and former residents have included Brian Grazer, philanthropist Wallis Annenberg, Neal Moritz and Irwin Winkler, and where seasonal rentals range this summer from $80,000 to $250,000 per month. One owner recently put their home up for rent to cash in, listing it for $40,000 more a month than its usual summer price. “I feel strongly that we’re going to hit that number on the bull’s-eye just because of what I see in the state of the rental market right now. It’s like the paper towel aisle at the market!” says Rogers, who grew up in the Colony.

“The Colony has its perks, but one of the negatives for me was when I would come home past my curfew — my parents would know because the gate guards would always rat me out,” says the agent of the neighborhood of 100 or so eclectic homes that hug the peaceful Malibu Lagoon State Beach. It’s known (in non-pandemic years) for its tennis matches, beach parties, Fourth of July celebration and barbecues, often of the catered-by-Mastro’s variety. In 2018, it was named L.A.’s priciest neighborhood by PropertyShark, with a median sales price of $10.65 million. “High demand and very low inventory fuels the soaring property values,” Rogers says. 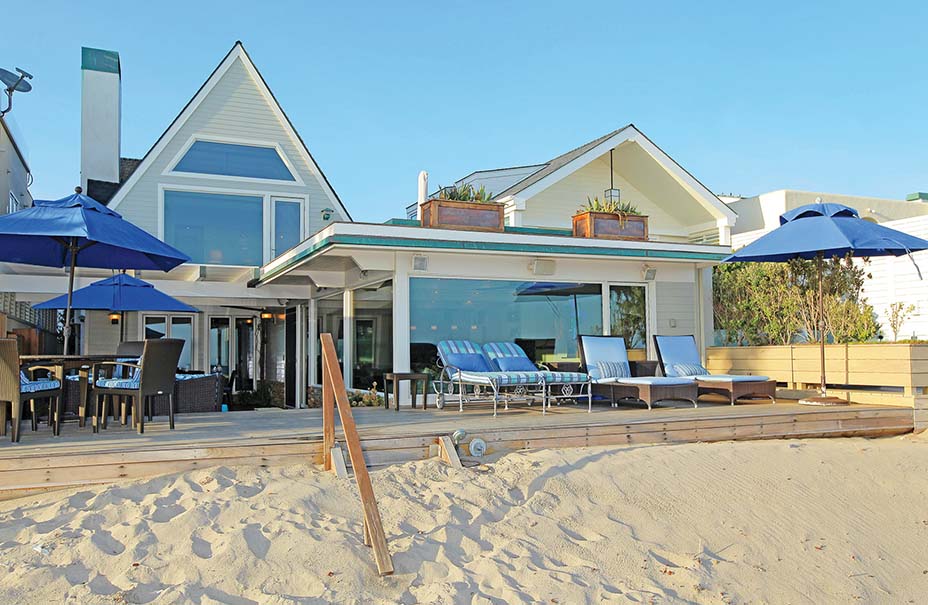 This A-listers’ paradise is the legacy of May Rindge, the fierce former owner of the entirety of Malibu. After decades of legal battles to keep her private fairy-tale Eden undeveloped, in the 1920s Rindge opened a 1-mile strip of beachfront on the eastern portion of her property for holiday renters from cash-soaked Hollywood. Silent stars including Gloria Swanson and Clara Bow stayed in temporary shacks, often built by studio carpenters, and the area became known as the Malibu Movie Colony. “You could punch your fist through the walls really easily. It was like living in a movie set,” says David K. Randall, author of The King and Queen of Malibu. Permanent housing was not permitted until the 1930s, when money woes forced Rindge to sell her land. Over the years, everyone from Barbara Stanwyck to Cary Grant to Cher to Leonardo DiCaprio has owned property there. Titans of industry (like casino mogul Sheldon Adelson, who purchased his ninth residence there earlier this year) live close to their neighbors in relatively modest homes on narrow 30-foot-wide lots. The public beach retains a private feel because of large boulders that block passage at high tide.

Few homes change hands. According to The Mark & Grether Group, only two homes sold in the Colony in 2019. This year, Jason Statham sold a home there for $18.5 million. Right now, four homes are on the market. Rogers — who notes that potential buyers must sign a coronavirus disclaimer and don gloves and masks to tour a property — is listing three of those, including a rustic charmer (listed at $8.45 million); a sleek four-bedroom stunner ($11.95 million) and a beachfront white-shingled beauty ($21 million) on a double lot. “You have a pool, a spa, and you actually have grass!” says Rogers. “Grass and parking in the Colony are like gold.”