Author Josh Malerman had just finished watching his 2014 novel Bird Box come to life onscreen when he turned to his fiancée and asked her of Sandra Bullock’s Malorie, “what happens to her next? I want to know.” After his fiancée reminded him that only he could know that answer, Malerman decided to venture back into his post-apocalyptic Bird Box world again to write a sequel titled Malorie.

“Sitting down to write Malorie the book almost felt like it was for her or it was her time,” Malerman tells The Hollywood Reporter ahead of his book’s July 21 release. “It felt less like I was writing a sequel to Bird Box and more like I was putting a spotlight on a character that I cherish through a life of writing so far.”

Though Malerman published the novel Bird Box six years ago, it gained a new audience and popularity in 2018, when Netflix brought his story to life in a film adaptation of the same name starring Bullock. The film became a phenomenon as it was viewed by 45 million accounts worldwide in its first week on the streaming service, according to Netflix, catapulting Malerman’s book on the New York Times bestseller list four years after its publication. The film even inspired a viral social media trend dubbed the #BirdBoxChallenge, in which people blindfolded themselves as they attempted various tasks.

“It was unbelievable! I’m sitting there writing about a woman in a rowboat blindfolded then, in 2019, I’m watching all these people doing this in videos,” Malerman reflects. “I, for the most part, thought it was amazing and funny. Some of it was totally crazy … I started to get worried because I don’t want somebody to get hurt.”

As Bird Box fame heightened, Malerman admits he watched the frenzy that followed the film’s release while in Michigan with his fiancée, something that helped in “making sense of it all.” “I was able to watch it all from afar. If I was at the bar with my friends while all that was happening, my God, I probably would have drank a whole bottle and had to be carried home,” he tells THR laughing.

The journey to a sequel to Malerman’s tale marks a long one for the 44-year-old author, who says he wrote the original rough draft for Bird Box in 2006. “I’ve been with the book in some form or another for 11 years,” he says. He recalls the rough draft — he wrote Bird Box while touring with his band — being “twice as long as what ended up coming out” and initially felt a retracted thread from his original version “could be its own book one day” before scrapping it and starting fresh.

In his follow-up Malorie (Del Rey), Malerman reintroduces the title character and her two children Tom and Olympia, survivors from the unknown phenomenon that causes deadly violence after the sight of mysterious creatures. The book begins 10 years after Malorie, Tom and Olympia found salvation in a school for the blind. Though having adapted to their new world with danger always lurking nearby, as detailed in an excerpt shared exclusively by THR, Malorie and her children embark on an unexpected journey to find other survivors as the creatures still loom and blindfolds are still intact.

With Bird Box as a bestseller and having penned a myriad of other books, including 2017’s Black Mad Wheel and 2019’s Inspection, it’s presumable that a sequel would be a no-brainer. But Malerman admits he never considered one. “There’s a million other ideas and I also like how Bird Box ended in almost a cold way,” he says. However, things changed when the author felt inspired after watching the Netflix film, but instead of the mysterious creatures taking center stage, it was Malorie’s turn for the full spotlight. With his sequel, Malerman hoped to allow readers the opportunity to see a “deeper side” to her character. “Bird Box was a bit more about the scenario that she was in and Malorie is a bit more about her than the scenario,” he explains.

Getting in the mindset of Malorie wasn’t that difficult for Malerman given she’s “the smoothest character” for him to write. “It almost feels like a best friend or a sister to me writing her. I feel like she reacted to the events in Bird Box exactly how I would have. I never had to rewrite, fix or enhance her. Her and I were like teammates,” he explains.

The writing process proved to be smooth as Malerman had two exemplars of his creation and juggled “those two realities” while writing. The author reread his original book and watched the Netflix film to “feel that same rhythm again.” Malerman, who sings and plays guitar with the rock band the High Strung, equates writing the sequel to creating music. “It would be the equivalent of if you are going to write song two for the album. It’s probably a good idea to go listen to song one. The most important thing to me was to try to find the beat of Bird Box.”

The character Malorie may have first originated from Malerman’s words and his creativity, but the author envisioned Bullock throughout the sequel’s writing process. “It’s impossible not to imagine Sandra Bullock as Malorie now,” he says. While it can vary for authors who have had their works adapted on whether or not they’re content with liberties taken, Malerman welcomed it. “I wrote the song Bird Box and the filmmakers were the band and they played it however they wanted to play it. I know that the book will remain what it is forever. I’d rather kind of just see what someone does with the story.”

Apart from Malorie, Malerman also narrates the perspectives of now 16-year-old Tom and Olympia, who were just children in the first story. In Malorie, readers meet Tom as a teen with a rebellious nature as he yearns to see and know more of the world he lives in rather than recoil behind the blindfold. Meanwhile, Olympia conveys a maternal nature to Malorie and respects the constant fear she lives with. “I feel like Tom and Olympia are like those two teenage reactions to your parents, split up into two people,” Malerman says.

Readers can recall Malorie consistently enunciating her infamous line: “Under no circumstance are you allowed to take off your blindfold.” But Malerman insists, there’s more to her than just being the strict mother she projects. “She lived so strictly by the fold that she was in danger of losing some sense of warmth or humanity,” Malerman says, emphasizing that there’s always going to be a vulnerable, scared human being “inside this rule enforcer.”

As Malorie is set to release in a time when the world continues to grapple with the novel coronavirus pandemic, Malerman is wary of comparing the frightening tone of his novels to that existing in real life. “Bird Box and Malorie are supposed to be the good scare. So I’m hesitant to compare it to the reality of this moment,” he says. However, he admits there was a moment that even he as a horror aficionado still found himself blurring the lines between reality and the Bird Box world he created. “I had a very strange moment where I was preparing to leave the house and I grabbed gloves and my wallet and mask and keys. I started to turn towards the window and I said to myself, ‘don’t look outside.’ And then I was like, ‘No. That’s your book, man. You can look outside!’ ”

The Bird Box world may be fictional but Malerman jokes that Malorie would handle the pandemic like a pro. “Anytime she left the house, it’s mask and gloves. She would only leave when it’s necessary and she would absolutely insist the same out of Tom and Olympia. No doubt about it. She would not be on the beaches in Florida,” he says laughing. 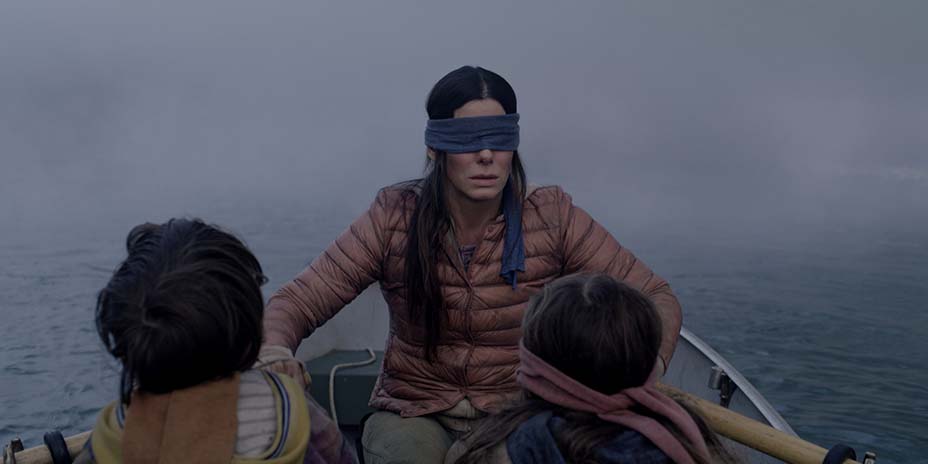 Despite being unable to embark on a nationwide book tour to celebrate the release of his book, Malerman has been keeping busy and staying inspired while at home as he continues to live by the mantra: “No matter how good or bad things are going, you should always be able to write.”

As he spends his days reading immensely and floating new novel ideas, Malerman teases he has surprises in store. When asked whether Malorie would be adapted into a film, Malerman coyly responded: “I can’t say much but the process has begun.” As to whether any of his other 32 works would be adapted, in particular his most recent horror book Inspection, Malerman hints that the story is in development for television.

Malorie may read like Malerman is making his goodbye to the Bird Box world, but the author admits he isn’t closing the curtain yet on a third installment. “I absolutely love spending time with Malorie. So would I want to do it again? Sure! Do I have an idea good enough to do it again? No,” he laughs.

Malerman may have lived the success other authors dream of but there is one particular feat he quips he has yet to achieve that would be his “real making it moment.” “I think every horror writers’ ultimate secret fantasy is to come up with a character that people dress up as for Halloween. I’m still waiting for the rubber mask of Malorie blindfolded. That’ll be the day for me!”

Malorie will be released on July 21. 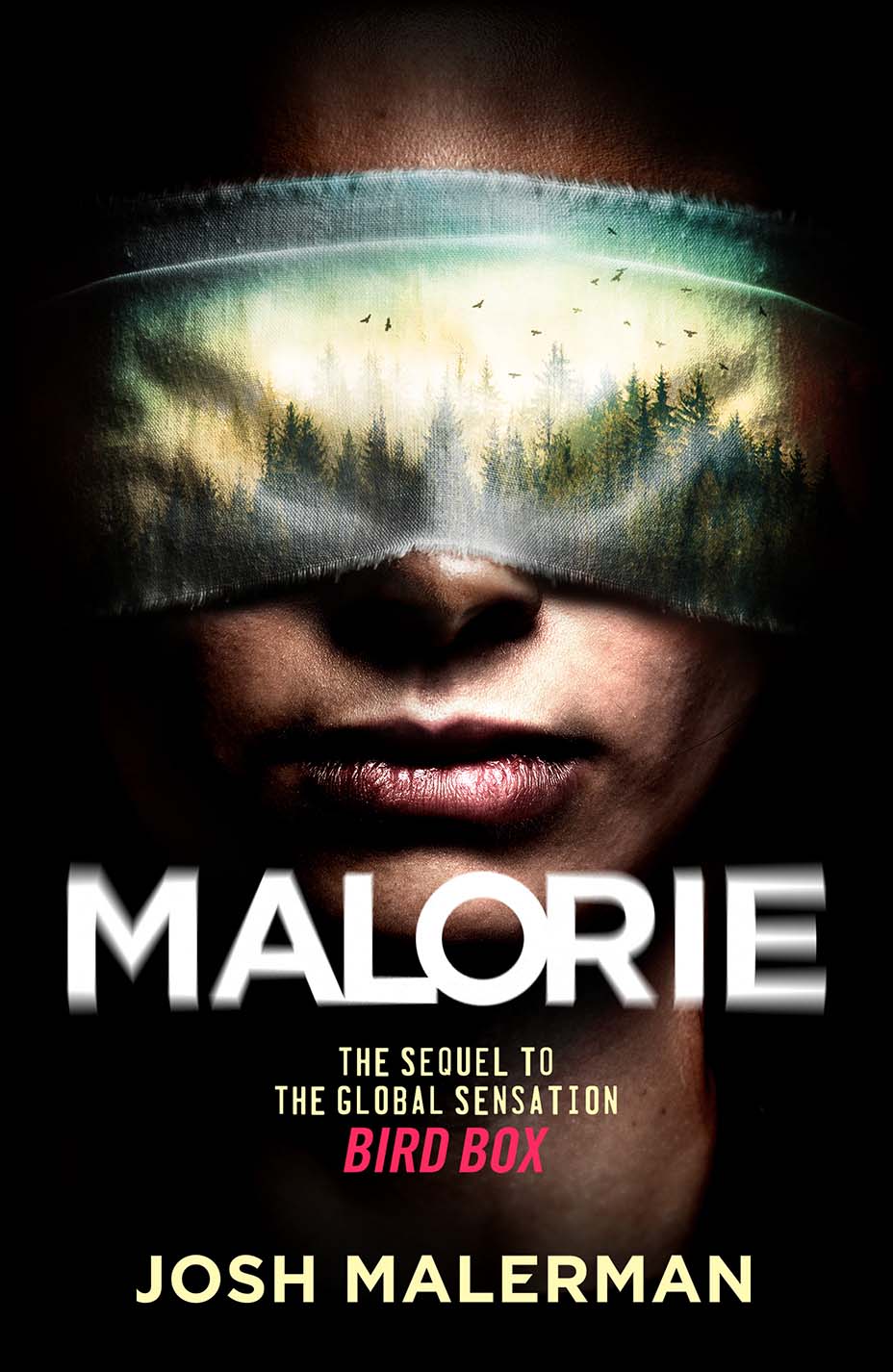