In 2008, Mamma Mia adapted the “jukebox musical” genre for the screen, wrapping a story of how Sophie (Amanda Seyfried) was trying to find out which one of her mother’s (Meryl Streep) former lovers was her father through the songs of Swedish pop band ABBA. The movie danced its way to $609 million at the global box office thanks to its light tone, catchy tunes and charming cast.

Now, 10 years later, Universal is bringing the sequel Mamma Mia! Here We Go Again to theaters. Seyfried returns as Sophie, now pregnant with her own child and wondering how she’s going to handle a family. She begins to learn more about her mom’s younger days, including the three men she was involved with at the time. Lily James plays the younger version of Donna.

Projections have the movie opening around $30 million-$35 million, which would put it roughly $14 million behind the first weekend of the original, and slightly above expectations for Denzel Washington’s The Equalizer 2 from Sony this weekend. Reviews have been mostly kind, with scores of 80 percent fresh and 61 percent favorable on aggregators Rotten Tomatoes and Metacritic.

Here’s how Universal rolled out the marketing for the musical sequel: 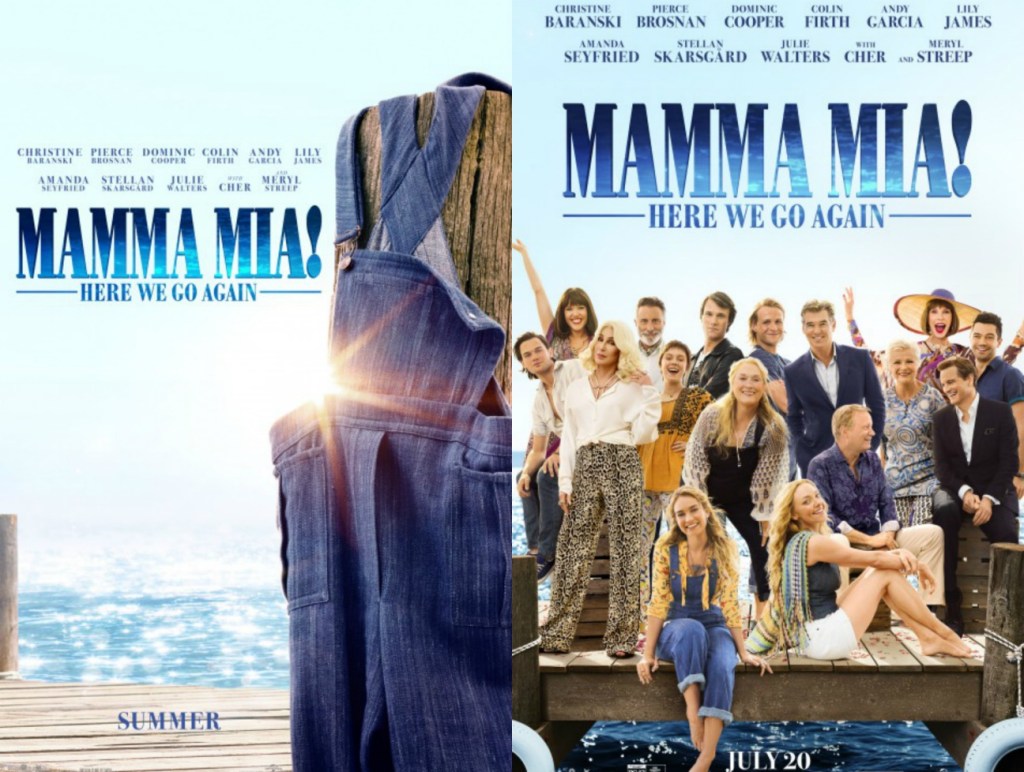 A pair of denim overalls hangs off a pier pylon on the first poster, a reference to Donna’s preferred wardrobe choice and reestablishing the story’s seaside location. That’s about it for the visuals, as the only other element on the one-sheet is the significant cast list.

The whole cast is squeezed onto the pier for the theatrical poster, mixing those who play present-day versions of characters with those from the flashback period of 1979. There’s no tagline or other information aside from the title, so the studio is clearly hoping the ensemble alone will be enough to draw people in. 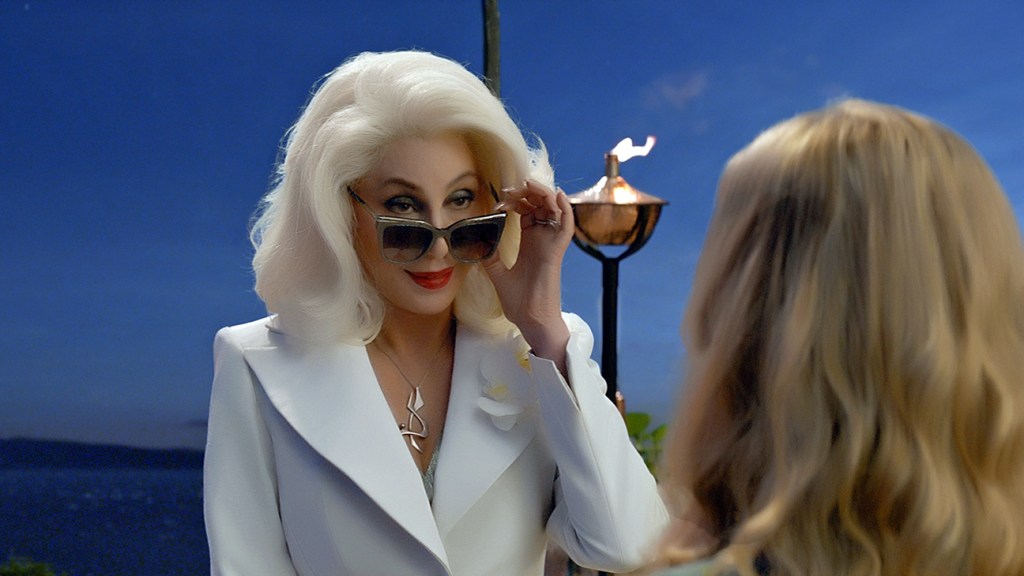 Sophie walks along the water as the first trailer (8.7 million views on YouTube) opens and we see she’s pregnant and turning to her mom’s old friends for support. That leads them to tell her all about Donna’s story when she was Sophie’s age and the various boyfriends and crushes she had back when they were all younger, before Sophie was born. It’s basically one big montage accompanying a journey of self-discovery. Finally at the end a surprise visitor shows up in the form of Sophie’s grandmother.

That trailer was released last December in front of Pitch Perfect 3, showing Universal believed there was significant overlap in the audiences for the two films.

The final trailer (5.2 million views on YouTube) from May mostly hits the same story beats, showing how this is about Sophie learning all about her mother’s adventurous younger days. There are a few additional scenes, but not much else that’s different from the first. 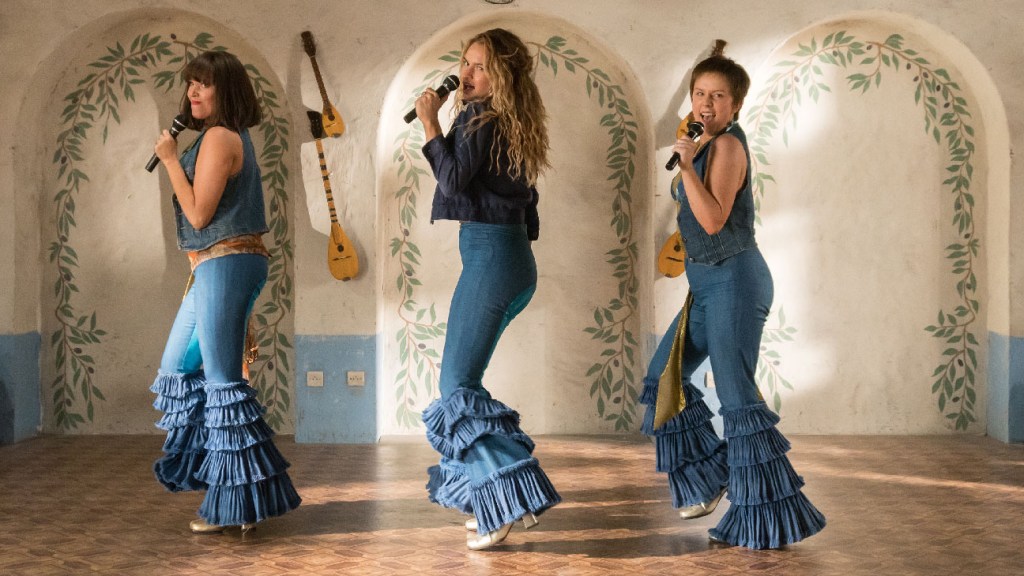 An extended commercial aired during the Grammy Awards broadcast in January, about a month after the first trailer. It was light on story elements but did establish that Sophie was pregnant and that the audience could expect a flashback-heavy films. The primary purpose of this spot was not only to hit a musically-inclined viewership but also confirm reports that Cher would be making an appearance.

Cher was once again in the spotlight when she appeared at Universal’s CinemaCon presentation in April, following a presentation of scenes from the movie with a performance of “Fernando” and other songs. There was also a featurette that had most all of the cast talking about the impression she made on set and how wonderful it was to hear her singing.

Other featurette videos included the importance “Dancing Queen” has in the story, the big opening “When I Kissed the Teacher,” how fabulous the costumes were, how lucky everyone felt to come back for the sequel and more.

Because Donna’s younger days are a big part of the movie, there were also a few behind-the-scenes videos serving as an introduction to the singing group she forms with her friends and how she met and formed relationships with her three boyfriends. 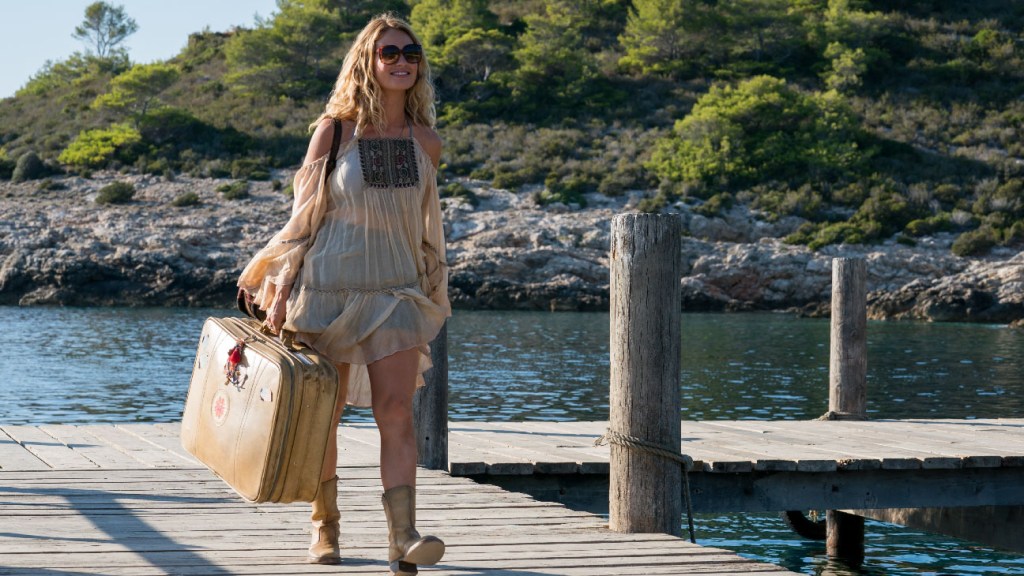 While she’s on the poster, the distinct lack of Streep in either of the trailers was notable, leading to quite a bit of speculation that Donna is dead in the sequel, something that the rest of the cast has been cryptic about during the publicity cycle.

Mostly Universal has sought to focus on the singing and dancing, presenting the movie as a lighthearted return to some old characters that may serve as an antidote to the constant box-office barrage of super heroes and other spectacle. It’s hoping that message is strong enough to come out on top of The Equalizer 2 but also whatever new and returning audiences are planning to see Ant-Man and The Wasp, Jurassic World: Fallen Kingdom or Skyscraper this weekend.