Jim Markham remembers vividly the days following the grisly Manson murders of Roman Polanski’s pregnant wife, Sharon Tate, her former boyfriend and hairstylist Jay Sebring and three others at the director’s Benedict Canyon residence in August 1969. At the time, Markham was Sebring’s protege and business partner in a budding franchise of men’s hair salons that stretched from a star-packed outpost on the corner of L.A.’s Melrose and Fairfax to Miami. Sebring became the second person to die at the hands of the Manson Family members during an infamous killing spree that claimed seven lives, including coffee heiress Abigail Folger and her lover, Polish screenwriter Wojciech Frykowski.

Markham, then 25 and splitting his time between his hometown of Albuquerque, New Mexico, and L.A., was the heir apparent to Sebring’s 400-plus clientele, which included Paul Newman, Frank Sinatra and Steve McQueen. Markham heard the news on the radio and got on the phone with Sebring International president John Madden. “Jay and I had talked many times … that I’d be his successor if anything ever happened to him,” Markham recalls. “I just took right over out of necessity.”

The hair-care mogul sipped a Perrier on the deck of the Majestic Hotel in Cannes when he met with The Hollywood Reporter, a day after the world premiere of Once Upon a Time in Hollywood — Quentin Tarantino’s spin on the events surrounding the Charles Manson-directed murders. (In the movie, Sebring is a key character played by Emile Hirsch.) By Markham’s side was his wife of 32 years, Cheryl — the daughter of Dan Genis, special effects guru behind Star Wars — who came of age during the Manson era.

Revisiting the weeks that followed the killings is both painful and cathartic for Markham, now 75 and fabulously wealthy thanks to founding four hair-care companies, including Pureology Serious Colour Care, which he sold to L’Oréal in 2007 for $280 million. (He pocketed more than $100 million on that deal alone.) Markham has never talked in detail about his entanglement in the infamous investigation that captured headlines worldwide and continues to fascinate new generations. His tale reveals his previously unknown role in the critical months after the murders, as law enforcement attempted to identify the killers and decipher their motives with no break in the case. 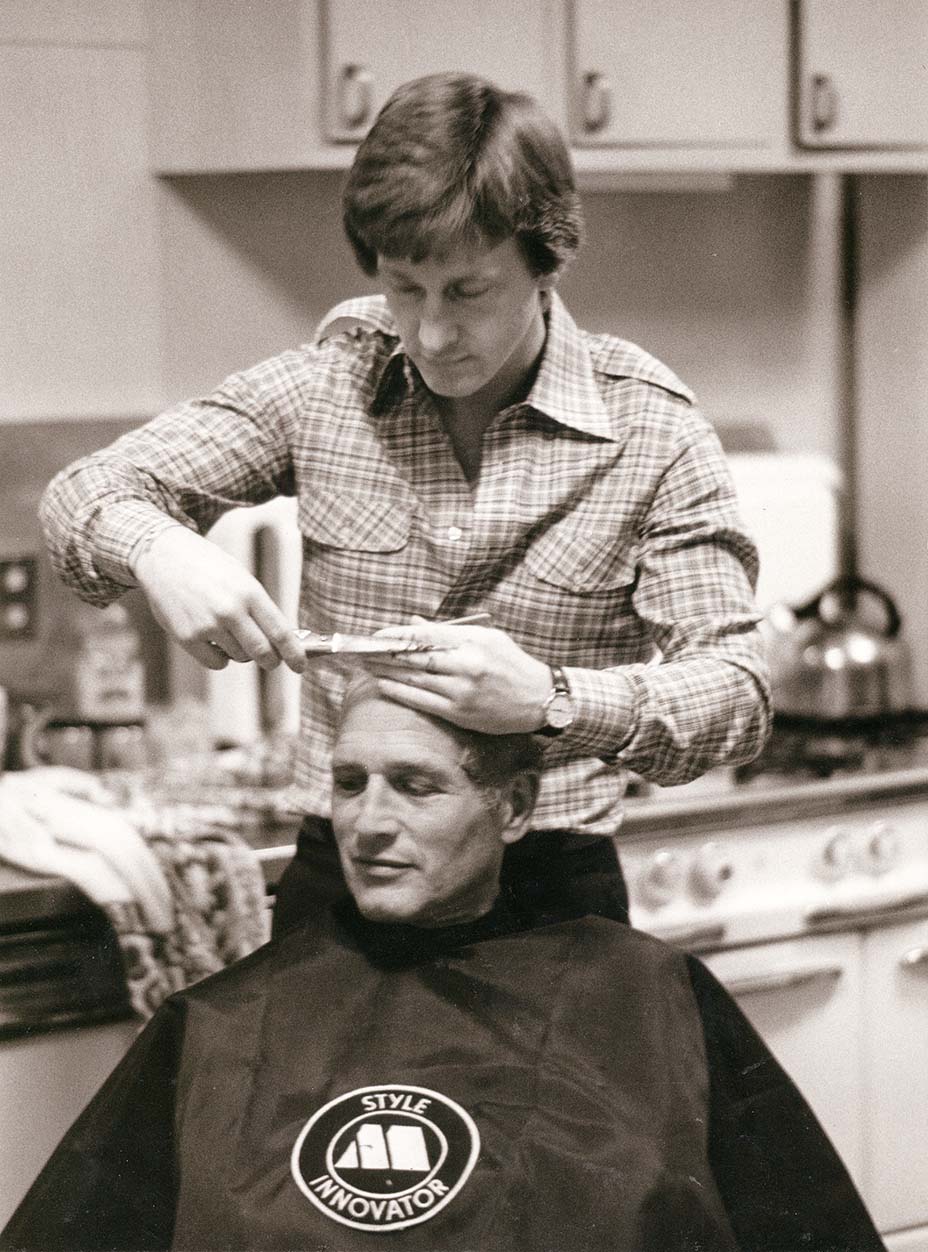 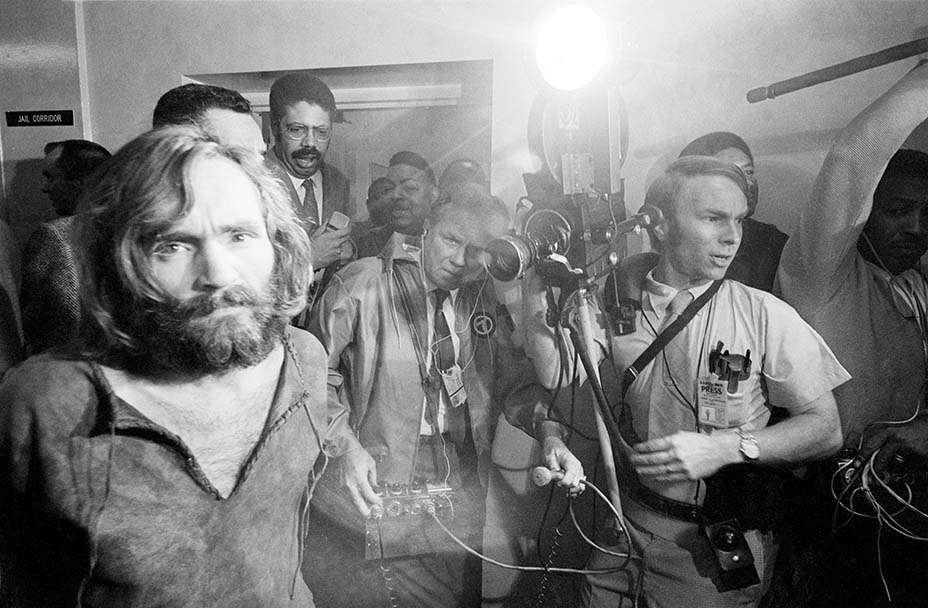 Days after the murders, and at the behest of Sebring’s father, Markham began living at the house where he had been a frequent guest: Sebring’s Bavarian-style home, once owned by Jean Harlow and located on Easton Drive in Beverly Hills — just one mile away from the Polanski-Tate residence on Cielo Drive. “I’m living in Jay’s house with raccoons on the roof — it would sound like somebody walking on the top of the house,” he says. “I finally had to move out. I thought I was going to be next. They hadn’t caught Manson. Nobody knew why it happened.”

As Markham remembers, Tate’s father, a colonel in Army intelligence, began working with federal agents on the investigation. The agents told Markham that they believed the killers were connected to the salon (murder victim Folger also had a connection to the hair enterprise given that she was an investor in Sebring International). The salon was bugged, but ultimately that line of inquiry lost steam. Once the Manson Family became suspects, however, about six months after the murders, the feds enlisted a willing Markham to set up a sting at his rented Brentwood home. He was to host a meeting between a woman and a man she had met at a bar, someone who had recounted to her at length how he had met Manson in jail. The former inmate was thought to have information pertaining to the cult leader’s motive for the murders. But Markham doesn’t believe any of the taped conversation from the sting was used in the trial that took place in 1970 and 1971. “This guy looked spooked, really scared,” he says of the meeting.

Five decades later, Markham floats his own theory, one that deviates from the official “Helter Skelter” scenario put forth by Manson prosecutor Vincent Bugliosi: that the cult leader ordered the Tate murders in hopes that it would spark an apocalyptic race war as foretold to him in what he believed were coded lyrics on The Beatles’ White Album.

Though Markham is reluctant to denigrate the memory of Sebring, who was his mentor and after whom he named his son, he claims that the late hairdresser knew Manson and suggests that the murders were the result of a drug deal gone bad — an account that aligns with a once-popular explanation that fell out of favor as the Helter Skelter narrative became dominant. Back in 1969, Sebring was nicknamed The Candyman and was said to have used his salon to peddle drugs to the stars.

“I don’t want to get into the drugs, but I never bought into the race war theory. I believe Manson had gone up to the house” — Polanski was away shooting a movie — “and Manson wanted to sell cocaine and marijuana,” he says. “He showed Jay and Wojciech the product. They were going to buy some of it, but the two of them beat him up at the gate. The next night, Manson sent the Family up [to kill them].” Markham adds, “I’ve lived with that for 50 years. I still believe that.” He declines to elaborate further given that he is still in touch with Sebring’s nephew Anthony DiMaria, who is planning a movie about his uncle.

In Once Upon a Time, Manson appears before the killings at the Cielo Drive house. The film implies that Manson was looking for record producer Terry Melcher, the son of Doris Day, who with girlfriend Candice Bergen had moved out before the murders. (In real life, Manson, an aspiring musician, was introduced to Melcher, who declined to sign him, by The Beach Boys’ Dennis Wilson.)

Once Upon a Time offers a revisionist history of the murders and introduces fictitious characters into the blood-soaked narrative, namely Leonardo DiCaprio’s actor Rick Dalton and Brad Pitt’s stunt double Cliff Booth. Margot Robbie plays Tate, while Polanski has a bit part, played by Rafal Zawierucha. Markham mostly approves of the film, but he bristles at the depiction of Sebring. “I thought Jay was marginalized, and that upset me,” he says. “They portrayed him as this sort of houseboy. This was a very powerful man at the time.” 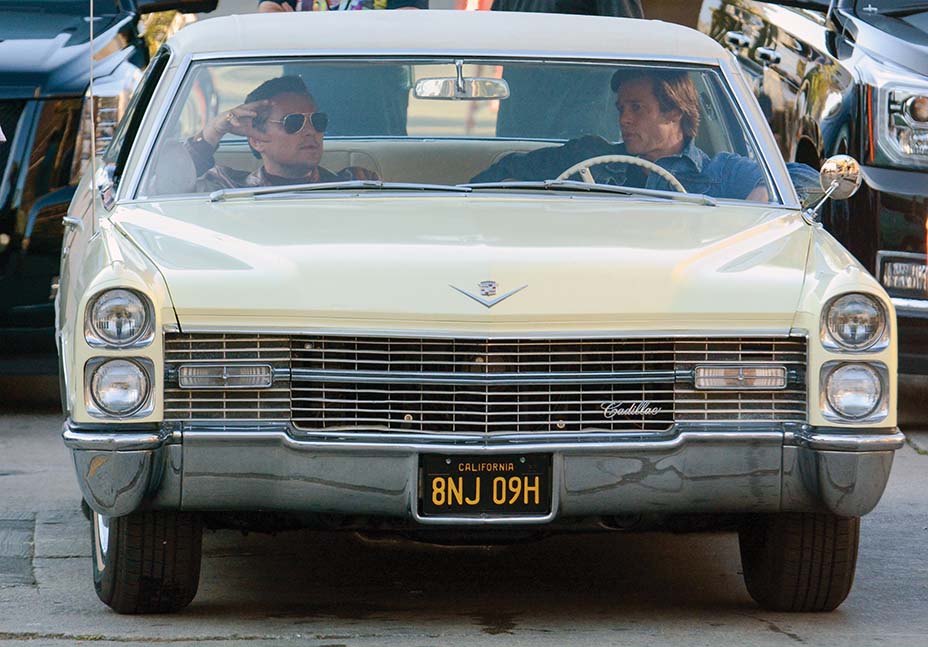 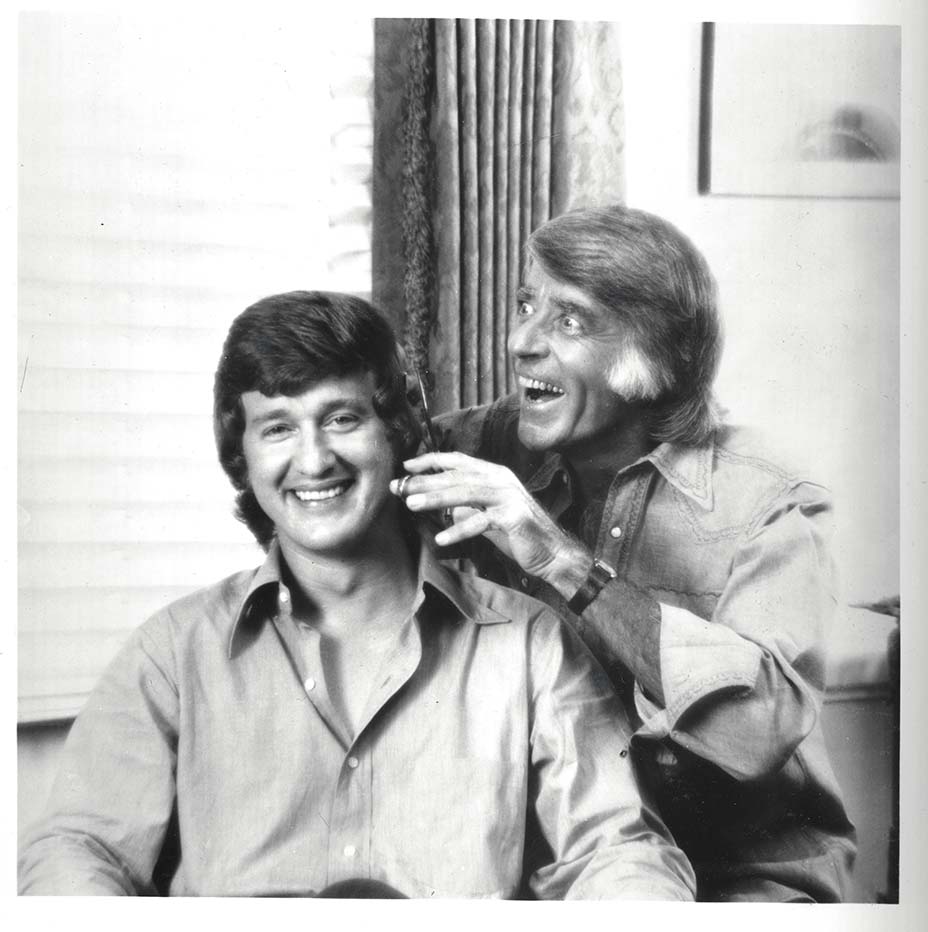 In the years after the Manson murders, Markham forged his own path — one that diverged from his humble beginnings of charging $5 a haircut in Albuquerque. After winning the silver medal in the Hair Olympics, he had flown to Los Angeles in 1966 to learn Sebring’s method of cutting and styling. (At the time, the celebrity hairstylist was romantically involved with Tate and living with her.) Markham describes Tate as a “really sweet lady,” but says he never saw the actress with Polanski. “She was always without him,” Markham says. “She seemed to like Jay a lot. They were always kissing. Lovey-dovey.”

Markham continued to intersect with the Tate family while the Manson investigation played out. “When I took over the salon, Sharon’s mother, Gwen, treated me like a son,” he says. Markham dated Sharon’s younger sister, Debra, who consulted on Tarantino’s movie. “She looked just like Sharon. They were a real nice family.”

In 1972, he founded Markham Products with backing from actor Peter Lawford, all the while cutting and styling for the likes of Newman (“my first, my favorite”), Robert Redford, Johnny Carson, Paul Anka, Joanne Woodward and Jacqueline Bisset. Newman was particularly loyal, allowing Markham to hang a framed letter in the salon in 1971: “He wrote, ‘Dear Jim, just a note to let you know that I’m a Sebring fan and you’re still running a first-class operation.’ ” Markham also taught a young Jon Peters the Sebring method. The hairdresser turned A Star Is Born producer took one of his classes in the early ’70s.

While doing a house call at Denis’ Modern Film Effects, a postproduction house that worked on Raiders of the Lost Ark and Apocalypse Now, Markham met Cheryl, then a receptionist. They married in 1982 and began running the businesses together. After selling Markham Products in 1989, Markham launched ABBA Pure and Natural Hair Care, one of the first vegan lines in the U.S., then sold it in 1997 for $20 million. With Pureology, a line created in 2001, Markham made his biggest contribution by developing the now-ubiquitous sulfate- and carcinogen-free shampoo. “The concept for Pureology started from a phone call,” says Cheryl. “My best girlfriend said, ‘I got diagnosed with ovarian cancer. My doctor gave me a list of don’t-use ingredients. You’ve got to make me things that I can use.’ ” In 2011, Markham founded his final company, ColorProof Evolved Color Care. Perhaps in a nod to Once Upon a Time, salons that stock the ColorProof product line are being offered classes on the scissor-over-comb technique pioneered by Sebring and perfected by Markham.

Although he provided original hair salon items to Once Upon a Time‘s props department, Markham’s input was otherwise limited. His offer to cut the hair of Damian Lewis, who plays former client and Sebring International investor McQueen, was rebuffed because Tarantino already had hired a hair team. “It looked like it was an ’80s look,” he says of Lewis’ cut. “But otherwise, Damian looked and acted exactly like Steve McQueen.”

Except for a handful of longtime, non-celebrity clients, Markham rarely cuts hair these days. Looking back to before the Manson murders, he waxes nostalgic. “It was the time of my life,” he says. “But then it was really awful. The whole city was terrorized. It went from being loosey-goosey to very guarded overnight. They brought about a whole new era.” 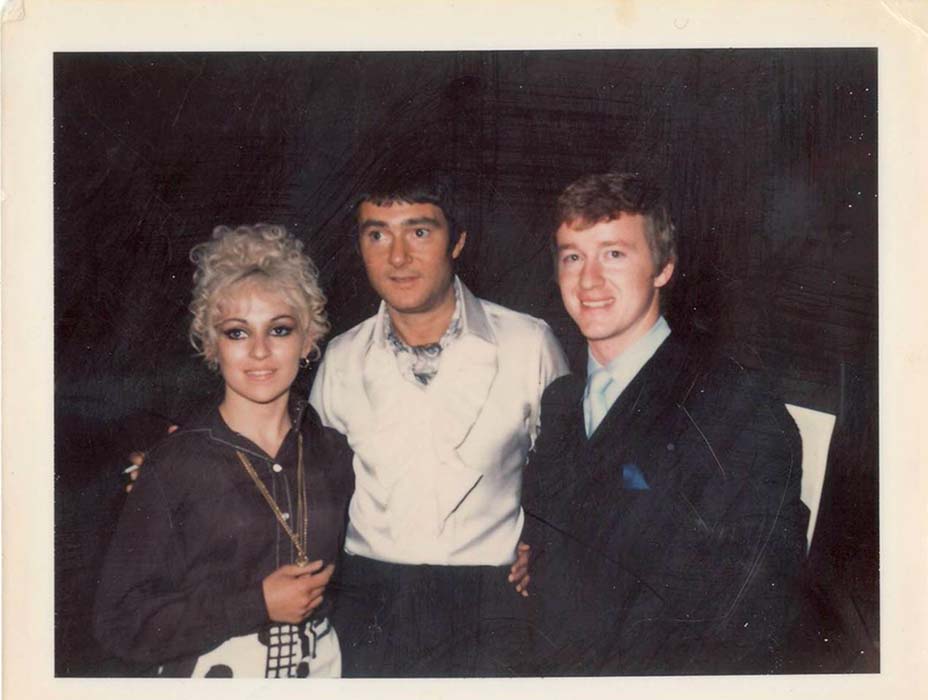 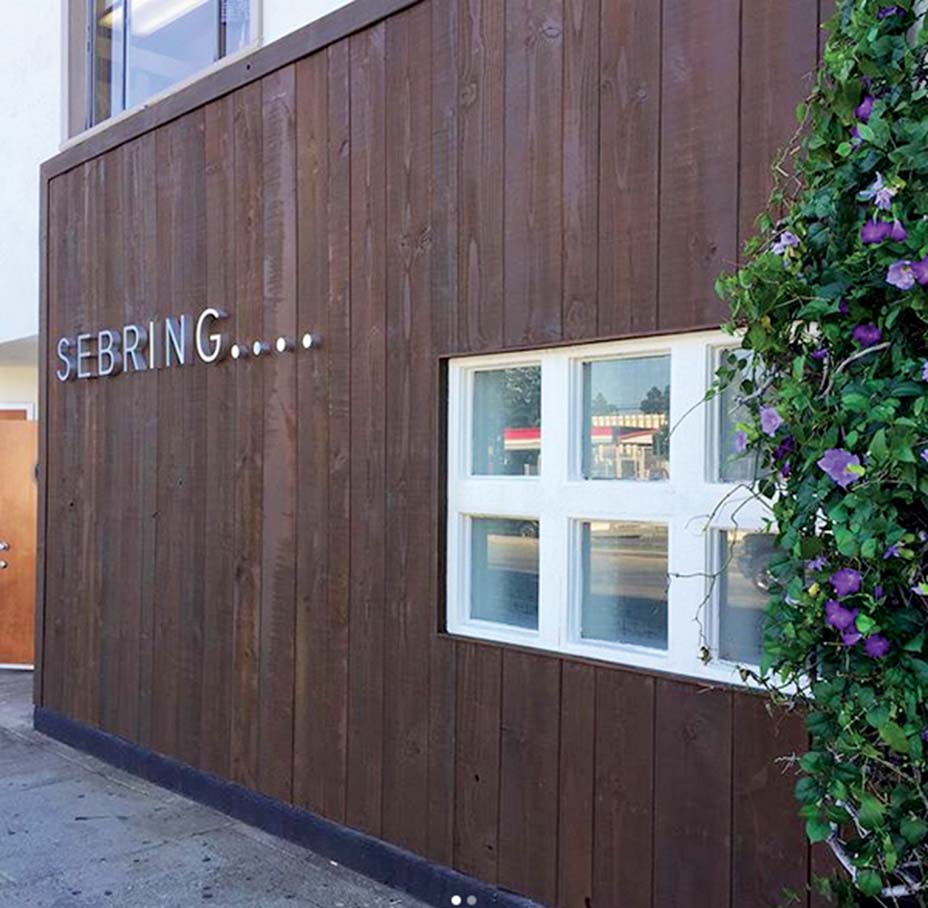 This story appears in the July 31 issue of The Hollywood Reporter magazine. To receive the magazine, click here to subscribe.