“There’s a couple ways to make a game in Core,” Jordan Maynard, Manticore’s chief creative officer, tells The Hollywood Reporter while showing off a demo of the platform. “You can start from a blank, empty project or use a Core game framework, basically frameworks that we’ve provided that implement different popular game modes.”

Those offered game modes include Battle Royale, shooter deathmatches, top-down explorations, platforming and role-playing, to name a few. Once chosen, creating in the program is as easy as dropping in pre-made assets (which are all made shareable by and for other users in Core) or as complicated as cobbling together one’s own work of art. The process is nearly instantaneous, quickly rendering the assets into the creator’s map. When satisfied, the user then simply clicks “play” and the game is ready to go immediately — with multiplayer support of up to 16 other users (this will increase, Manticore says, once the platform reaches later stages of development).

Pre-made assets are also customizable. Don’t like the way a rock looks? Add a gold sheen to it. Notice those palm trees? Well, they’re actually a column with ferns attached on top, something made by another creator and now available as a packaged, finished “palm tree” for all other creators.

Since the platform is free to download and use, one may wonder how Manticore Games — a fresh-faced studio which has raised more than $45 million in funding from companies like San Francisco venture firms Benchmark and Tuesday Capital — is monetizing Core.

“We want to create a new user-generated content revolution. We had it with Instagram, YouTube and Twitch, so the next phase is games,” says Frederic Descamps, Manticore Games CEO. “We want creators to make money, publish their games, find their audiences and make a full living. Our goal is to create very strong economics for our creators.” 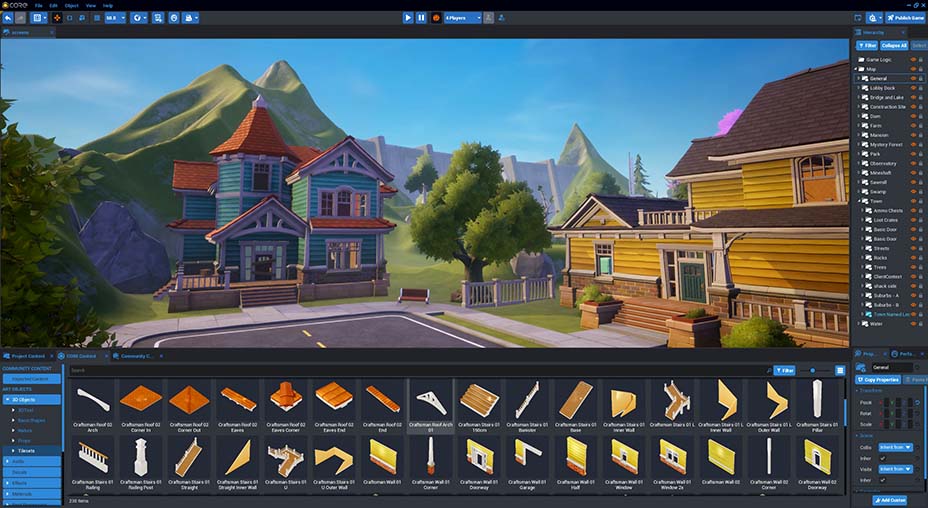 Descamps says the money comes “from the community, the players,” who can spend on cosmetics, avatars, accessories, et cetera. They can also “give directly to creators and subscribe to their favorite creators, just like on Twitch and YouTube.” As a whole, Descamps says the monetization is a “mix of the best practices you see in Fortnite, Apex Legends, Twitch and YouTube.”

Back to the demo at hand, Maynard has finished creating a map for a shooter match (which he named “PatDemo”) and invited some colleagues to hop in the game along with him. Once he clicks play, the game begins immediately. After a few headshots (“I told them to let me win,” Maynard says), he shows off one of Core’s most innovative features: A portal.

“Because of the technology we built with Core, you can join any game incredibly fast. That means, I can make a portal that is basically the same as clicking on a link that will join me into a different game on a different server, perhaps even written by a different person,” Maynard says as his in-game avatar steps through a StarGate-esque gateway. His colleagues (whom he just shot) follow along and, within a few seconds, the group has been transported from a shooter reminiscent of an Overwatch desert map to a high fantasy, World of Wacraft-like capture-and-hold mode.

Seamless transitions and quick load times are paramount to Manticore, allowing Core users to create, alter and innovate games relatively on the fly, compared to current game engines. “The speed is light years faster than any other game development projects,” says Descamps. “Here, we can have a quick discussion and create versions within minutes.”

Utilizing the portal feature, the Manticore team has built a central, in-game hub that users can meet in before heading in any of a number of directions to step through a gateway into a fully-developed game. However, if players would rather opt for a point-and-click interface, Core also features an interface much like online marketplace Steam, or Netflix, with a row of separate titles that can be booted up with a simple mouse click.

Core is not just for consumers looking to try their hand at game creation. Descamps notes that the company has “had interest from AAA studios to adopt Core already,” though he remains mum on specifics.

“Even if you are a professional gamemaker, the chances that you get your game idea made at a large publisher is pretty low,” says Maynard. “Here, you’re able to put something together and get it out there within a couple of days.”