Marc Shaiman already had a Grammy, an Emmy, a Tony and five Oscar nominations under his belt before he became a double nominee this year for the original score and an original song (“The Place Where Lost Things Go”) from Disney’s Mary Poppins Returns.

The self-proclaimed “Poppins fanatic” not only got to work on his dream project but also was reunited with director Rob Marshall (they briefly worked together on the Broadway production of Hairspray). Shaiman, 59, spoke with THR about the 1964 film’s influence and what it was like to write music before a single frame of film had been shot.

When were you first approached for Mary Poppins Returns?

I got the first email in July 2015, and for a Poppins fanatic like me, it was the opportunity of a lifetime. Many years ago, Scott [Wittman] and I had been developing Hairspray with Rob. We’d done three readings of the play, and we knew we were one reading away from being ready. That’s when he got the green light to direct Chicago, which went on to win best picture at the Oscars and reinvigorate the musical genre.

Hairspray became a colossal success as well, earning multiple Tony Awards, so it’s safe to say that things worked out for the best?

Absolutely, and that never happens in Hollywood — to have both projects become huge hits. Unfortunately, there was no way we could wait long enough for Rob to finish making Chicago, so we had to make our Sophie’s Choice and go with another director and choreographer [for the show]. We remained in what I call the mutual admiration society for many years after that, until this project came along.

With Mary Poppins Returns, the plot and characters are linked to the lyrics of the songs. How did that work in the development process, and do you have a favorite moment from your brainstorming sessions?

Scott and I met with Rob, [screenwriter] David Magee and the producers very early and quite often. I was so proud when Scott came up with the tuppence reference, which tied our film to the original. I was so happy for him, but being the Poppins fanatic, I was also horrified that I didn’t come up with it.

When deciding on what song to push for awards season, was that a committee decision? What other song do you wish was considered?

It was definitely a committee decision. Scott and I agreed that “The Place Where Lost Things Go” is the emotional core of the movie, but if given a second choice we would’ve gone with “There’s Nowhere to Go But Up.” It means so much in this world right now, that idea of, “When you’re down so low, there’s nowhere to go but up.” It’s a very glass-half-full message, and I’m truly one of the most pessimistic guys. 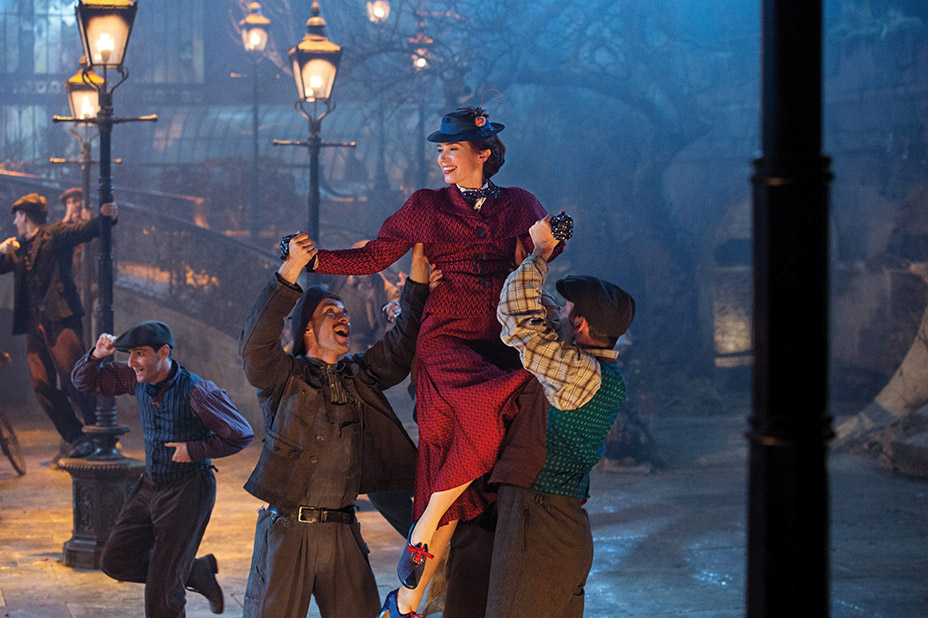 How did you balance referencing the melodies of your new songs as well as the Sherman Brothers’ songs in the film’s score?

I consider myself an arranger as much as a composer, so I loved taking the existing melodies and figuring out how to put them in the score. There were some incredible chord progressions from the brilliant Irwin Kostal from the original film that I was also able to use. In some places, I was told to pull on references to the original. Early in the film, when Mary Poppins looks in the mirror and then enters the Banks’ living room, I was able to score that scene entirely with the Sherman Brothers’ “The Perfect Nanny.” It was almost magical the way it lined up with the action beats of the scene, but [producer] Marc Platt said it was too early in the film and we should establish our own material.

Rob asked you to score scenes from the film before the cameras rolled. What was that process like for you?

When Rob told me he wanted score at the prerecord, I said, “Rob, how can I score a scene that hasn’t been filmed?” It seemed like a waste of time and money, but he wanted it on set to use as inspiration for the actors. So, I went home over Christmas and read the script like a radio play. I wrote what I thought it should be, then recorded the score. I was beyond shocked when all of the recorded score made it into the final film. I couldn’t believe that Rob was that accurate— it’s insane how masterful a technician he is.