Continue to The Hollywood Reporter SKIP AD
You will be redirected back to your article in seconds
Skip to main content
April 30, 2020 6:33pm

Mari Winsor, a beloved fitness instructor to the stars who was credited with popularizing Pilates, died Tuesday at her Sherman Oaks home of complications from amyotrophic lateral sclerosis. She was 70.

Winsor, a trained dancer, started her career appearing in music videos for pop stars like Michael Jackson and Huey Lewis before segueing to find success as a fitness celebrity who put her own spin on the art of Pilates while building up a devoted fan base of celebrities.

She opened her first studio, Winsor Pilates, in 1990 and is credited with helping the exercise method hit the mainstream through infomercials, a video series and several books on the subject. Winsor battled ALS since she was diagnosed in 2013, transitioning to become an activist and advocate helping to raise money to find a cure.

Her passing comes at a time when the COVID-19 pandemic has halted or transformed nearly every aspect of everyday life, and that applied to Winsor’s goodbyes. Her close friends and family adapted to California’s strict to safe-at-home orders, designed to help those with underlying health conditions and to prevent the spread of the novel coronavirus. While those in her inner circle had prepared celebration of life events during April knowing Winsor’s health was deteriorating and she would be entering hospice care, plans had to be reconfigured to accommodate current health officer orders. Winsor’s niece and namesake, Mari Levitan, a production supervisor for DreamWorks Animation and a former Winsor Pilates trainer, organized three Zoom events held over two days that included more than 200 guests from Los Angeles to London.

As one Zoom event came to a close, Maria Shriver, a onetime client and still a friend, wrapped up the call saying how she had been touched by Winsor’s friendship and Pilates teachings. “Mari always made me feel included whether I could do the Pilates or not. She always said, ‘It’s OK if you don’t come back. I’ll love you anyway. You’ll find time when the time is right. You’ll be able to come and do Pilates.’

“I think it’s an extraordinary gift that she has given all of us to be gathered here today to share these remembrances of her. Our time here on Earth is really just the relationships that we touch the people that make up our world, and what a successful, extraordinary life Mari has led, and lived … and she will live on with everyone here. I am just deeply honored to have listened to everyone, to have been invited to participate, and Mari, I hope you know that I love you, I admire you, and I’m going to try to go back to Pilates.”

Longtime friend and rep Alison Graham was among those in Winsor’s inner circle present when she died Tuesday. “She floated,” Graham tells The Hollywood Reporter of the moment that came as “Count on Me” and “Treasure” by Bruno Mars played in the background. “It was beautiful — as if choreographed. Those of us with her took every breath with her. At one point, we all reached out to each other’s hands over the center of Mari and laid them down upon her, in unison. We held that position and breathed as one. We let go, and watched as Mari took one last look at us, at the world. She closed her eyes, but kept on breathing — in-out, in a slow and steady rhythm. We told her she is loved. We whispered, “It’s OK, you can let go now.”

Born on March 11, 1950, in Marshall, Michigan, Winsor knew early on that she had a gift for movement. She studied modern dance at Michigan State, where she joined the Kappa Kappa Gamma sorority. After graduation, Winsor moved to New York and roomed with fellow dancer Sarita Allen, whom she met while on scholarship at the Alvin Ailey American Dance Center.

They became fast and lifelong friends as Allen went on to become a member of the Ailey company and Winsor moved to Detroit and later San Francisco, cities where she danced and developed a teaching and choreography practice. In the Bay Area, Winsor’s moves caught the eye of pop star Lewis, who hired her to choreograph his 1983 music video “Heart and Soul.”

The following year, Winsor headed to Los Angeles at a time when music videos were all the rage in pop culture as many television sets had dials set on MTV. She found work as a featured dancer in music videos like Jackson’s “Smooth Criminal” and in films like Jackson’s Moonwalker, Boaz Davidson’s Salsa, Rowdy Herrington’s Roadhouse, starring Patrick Swayze, and Robert Iscove’s The Flash.

For 20 years, she built a career as a dancer, choreographer and teacher, traveling across the U.S., France, Israel and parts of Eastern Europe. But when her 40s approached, Winsor elected to change course and find a new discipline that could make maximum use of her talents. It was Allen, still a member of Ailey’s company, who suggested Pilates.

The fitness practice was created by Joseph Pilates and is described as a form of exercise that focuses on strengthening the body through posture, balance and flexibility. Particular emphasis is placed on core strength, breathing and movement. Winsor took classes at a local studio in L.A. and was later hired as an instructor.

Not long after, in 1990, Winsor opened her first studio in the city under the name Winsor Pilates, which was soon patronized by actors, musicians and celebrities drawn to her “dynamic sequencing”-style of exercise. In 1992, after training under Joseph Pilates-protégé Romana Kryzanowska, she received her official certification, and Winsor Pilates became known for the method enhanced with Winsor’s special sauce.

A breakthrough came in 2003 when Winsor released her first infomercial, thus introducing Pilates to a mass market. Her business exploded and she went on to record and release 30 videos in a series with Guthy-Renker that has sold more than 50 million units. Winsor co-authored the fitness books The Pilates Powerhouse; The Pilates Pregnancy: Maintaining Strength, Flexibility and Your Figure; and The Pilates Workout Journal: An Exercise Diary and Conditioning Guide. 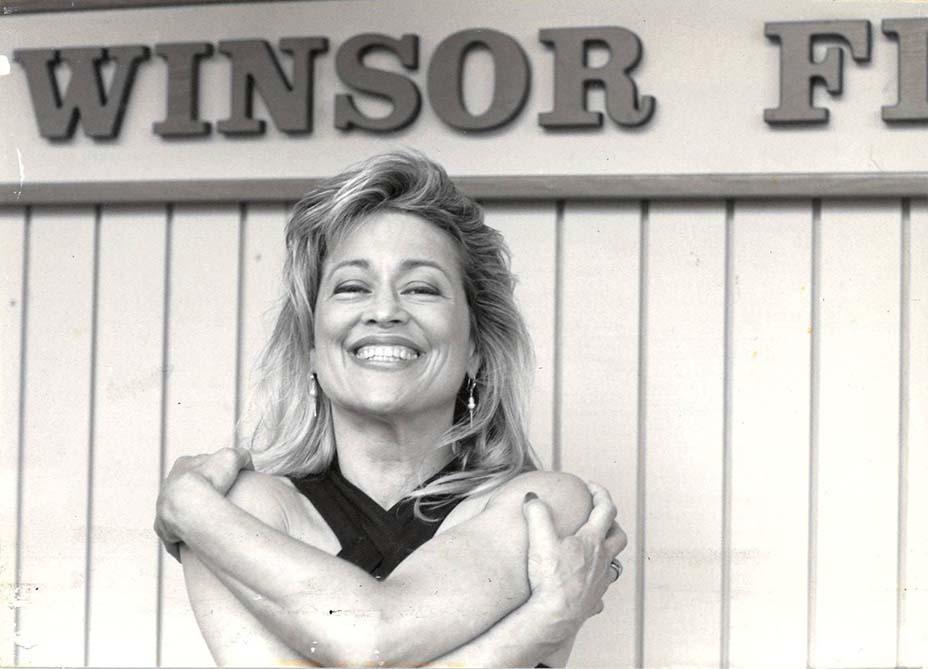 Winsor received the ALS diagnosis in 2013, a devastating blow for anyone due to the unique cruelties of the disease but particularly so for a fitness professional who gained notoriety for the way she moved and how she matched those skills with a motivational spirit. ALS, also known as Lou Gehrig’s Disease, is a neurodegenerative illness that affects nerve cells in the brain and the spinal cord. Life expectancy can range from two to five years, though some live longer. As the disease progresses, it robs people of the ability to walk, talk, move, speak, swallow and, eventually, to breathe all while the mind and senses remain intact. It is always fatal.

“I wasn’t gonna let something like this stop me,” Winsor said of receiving the news. “So, with that in mind and with the love around me, I was encouraged to still teach even though my voice is a little funny and what not, I really wanted to.”

Winsor went public with her diagnosis in May 2014, just months before the Ice Bucket Challenge became a viral phenomenon. That summer, she connected with the ALS Association Golden West Chapter, an organization she would be closely aligned with for the rest of her life. She became a fixture at their annual Walk to Defeat ALS events, where she would always share a tent with iconic celebrity publicist Nanci Ryder as the two dominated fundraising initiatives. Team Winsor Pilates supporters like Elizabeth Berkley and Byron Allen would mix and mingle with Team Nanci supporters like Renée Zellweger and Courteney Cox.

Winsor volunteered to lead the pre-walk warm-up with her Winsor trainers, which she did in 2014 and 2015. The latter year, she was joined by Cyrus in an enthusiastic showing that made national headlines. In 2016 and 2017, when mobility became a challenge, Winsor’s close friend, Toni Basil, best known for her 1981 hit “Mickey,” led the warm-up. Over the years, her devotees and supporters helped raise close to $100,000 in the fight to find a cure.

Winsor and her husband, Elliot Nachbar, a retired Local 80 Grip, traveled in May 2015 with the ALS Association Golden West Chapter to Washington for National ALS Advocacy Day, an event that saw Winsor meeting with congressional leaders and senators to share her experience and advocate for others living with ALS.

Winsor is survived by her husband; her sisters, Phyllis Mazure and Gwen Winsor Smookler; her nieces, Mari Levitan and Ann Mazure; and her nephews, Mike Smookler and Eric Mazure.

Her family is requesting gifts be made in her name to Complexions Contemporary Ballet Emergency Relief Fund or to the ALS Association’s Golden West Chapter via Team Winsor Pilates. 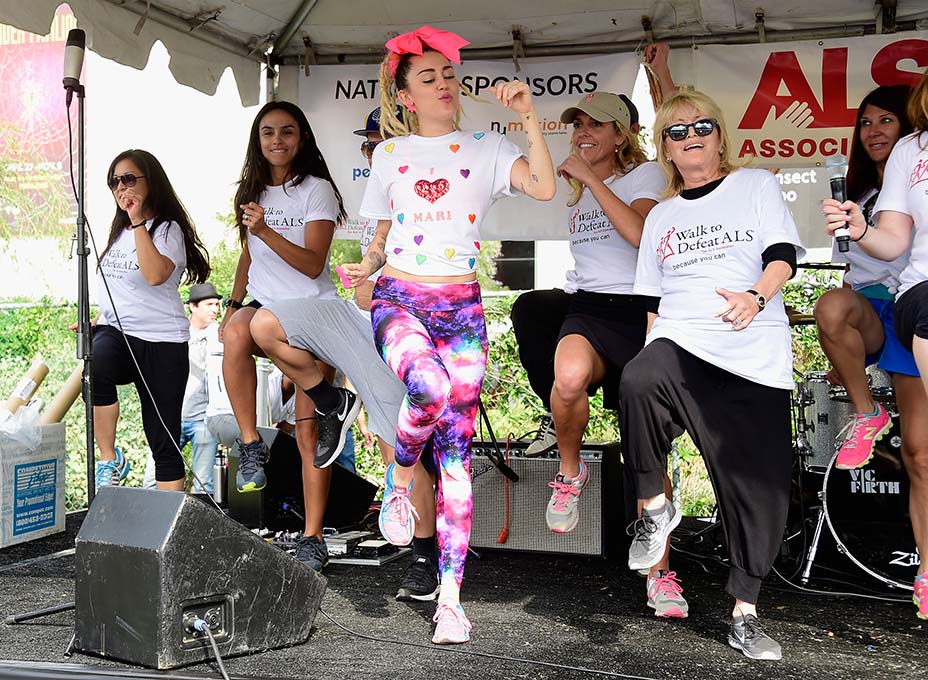