Welcome to the Primal Age.

Starting Friday, the new toy line that reimagines DC Entertainment’s heroes and villains in a Masters of the Universe-inspired fantasy setting — produced in partnership with Funko — will be exclusively available at Target stores, along with something sure to excite long-term DC comic book fans: the DC Primal Age 100-Page Giant, an extra-length comic book special with art and story from a number of fan-favorite veterans, including Louise Simonson, Jerry Ordway, Brent Anderson and Chuck Patton.

The creator at the heart of the comic is one well known to any DC fan: Marv Wolfman, the co-creator of the New Teen Titans — and, along with George Perez, character creator for Raven, Starfire and Cyborg, among many others — and writer of the iconic Crisis on Infinite Earths mini-series that redefined the DC Universe in 1985 (and inspired episodes of the CW’s Flash and related shows in the process).

Wolfman teams with Deadpool artist Scott Koblish for the main story in the issue, introducing the main characters of Primal Age and the world they live in, and also writes one of the back-up strips in the issue, which re-teams him with former Fantastic Four and Amazing Spider-Man collaborator Keith Pollard.

THR talked to Wolfman about DC Primal Age and also debuts exclusive preview images from the special issue, below.

How did you get involved with DC Primal Age? Was the toy line fairly far along in terms of development by the time that you were brought on board, or did you help with the development?

I got involved in the simplest way possible: I was asked.

DC publisher Dan DiDio called to say he had a project he knew I’d love to write, but, milking my curiosity, he wouldn’t tell me anything about it unless I showed up at the office. The next day I drove to Burbank, and Dan told me about DC Primal Age, which was a brand-new line of figures and playsets by Funko. I already had many of Funko’s great Pop! figures, so of course I was intrigued.

I was then shown the figures and sets, already completely developed. They were squat and over-muscled and very much reminded me of the fun action figures from 1980. You looked at them and you absolutely had to smile. Not only were they fun versions of Superman, Batman, Wonder Woman and the other DC Super Heroes, but somehow they were oddly nostalgic.

Dan told me beyond the look of the figures, they wanted a faux-1980s feel to the Primal Age comic stories. In fact, part of the reason I think I was chosen to write it is that I’m one of the very few writers from that period still working, so it could almost sound possible that I had developed Primal Age back in 1980, even as I was also putting together The New Teen Titans.

I loved the silly idea of these short and squat DC heroes being re-conceived as super-powered sword and sorcery heroes, and just looking at the toys, I knew writing it could be a lot of fun for me. And hopefully the readers.

There’s a metatextual element to the toy line, and the comic book follows through on that — as you said, combining this 1980s influence from things like Masters of the Universe toys and 1980s comics in general, with the idea of this alternate timeline featuring the DC heroes. How did you approach mixing all this together?

Basically, these toys had to feel nostalgic, as well as being pure fun — check the grim and gritty at the door and be prepared to smile while playing with them. So that meant there had to be a lot of humor in the story, but it could not be snarky or self-referential. You had to laugh with the characters, and definitely not at them. With that in mind, I tried to put together a story that was structurally like a 1980s-or-earlier comic yet could be enjoyed by 2019 standards, since that’s when everyone is going to read it. It was a delicate mix, because you never want to make fun of the idea while still enjoying the silliness it provides.

One of the perhaps more obscure influences I felt in the book was some of the sword and sorcery titles of the ’70s — not just DC’s Hercules Unbound and even Jack Kirby’s Atlas, but also things like Marvel’s Skull the Slayer, which you’re intimately connected with. Were you drawing on specific past experience of the fantasy/sword and sorcery genre when working on this?

Funny, I never thought of Skull the Slayer, even though I created it back in the 1970s! Truth is, I wasn’t drawing on any of those old comics. My only point of reference was the look of the toys themselves: the fun factor is built into their little squashed bodies and outrageous playsets. But you can never call attention to that, or the story becomes meta and self-aware, which blows the idea.

So all my clues on how to write DC Primal Age came from the toys and characters themselves, not from other media. Also, the story — although filled with these fun characters — still had to be written so today’s more critical audience would enjoy it. A joke is good for a laugh or two, and then, read once, you throw it away, but I felt these stories, although there needed to be humor, they still had to be done seriously and with respect, so readers would want more. ?

Despite the setting, there’s also a wonderful old-school JLA vibe in these stories. You have quite the history with DC’s Super Heroes, even beyond the iconic Crisis on Infinite Earths and New Teen Titans; I’m thinking about your 1980s Action Comics work specifically. What was it like “returning” to those characters, albeit in an altered setting?

I had decided early on that I was going to use the chapter framework of the old Justice League of America stories, where each hero had his or her own chapter before teaming up against the bad guys. I felt that would give it a not-so-obvious, subtle nostalgic feel. It also gave me a chance to write many of the DC Super Heroes for the first time in years. Besides Superman and Batman, who I’ve written more recently, it was great fun revisiting the Flash, Green Lantern, Wonder Woman and the others. And the freedom to set up this barbarian alternate universe meant I could write anything and not worry if it fit current continuity or not!

The book’s availability at Target means that it’s got the chance to be found by new and lapsed fans, in addition to the comic store regulars. What’s your sales pitch for those curious about DC Primal Age to convince them to give it a try?

Most comics stories today continue for multiple issues — to get the complete story you need to buy a number of books. The beauty of the 100-page DC Primal Age one-shot is, all the stories within are done in one. You won’t need to buy a hundred or more books to get the entire story. Also, if you’re not a comics fan but just want to give it a try, DC Primal Age is fun and silly and you can just read and enjoy it without having to know anything else about any of the characters. 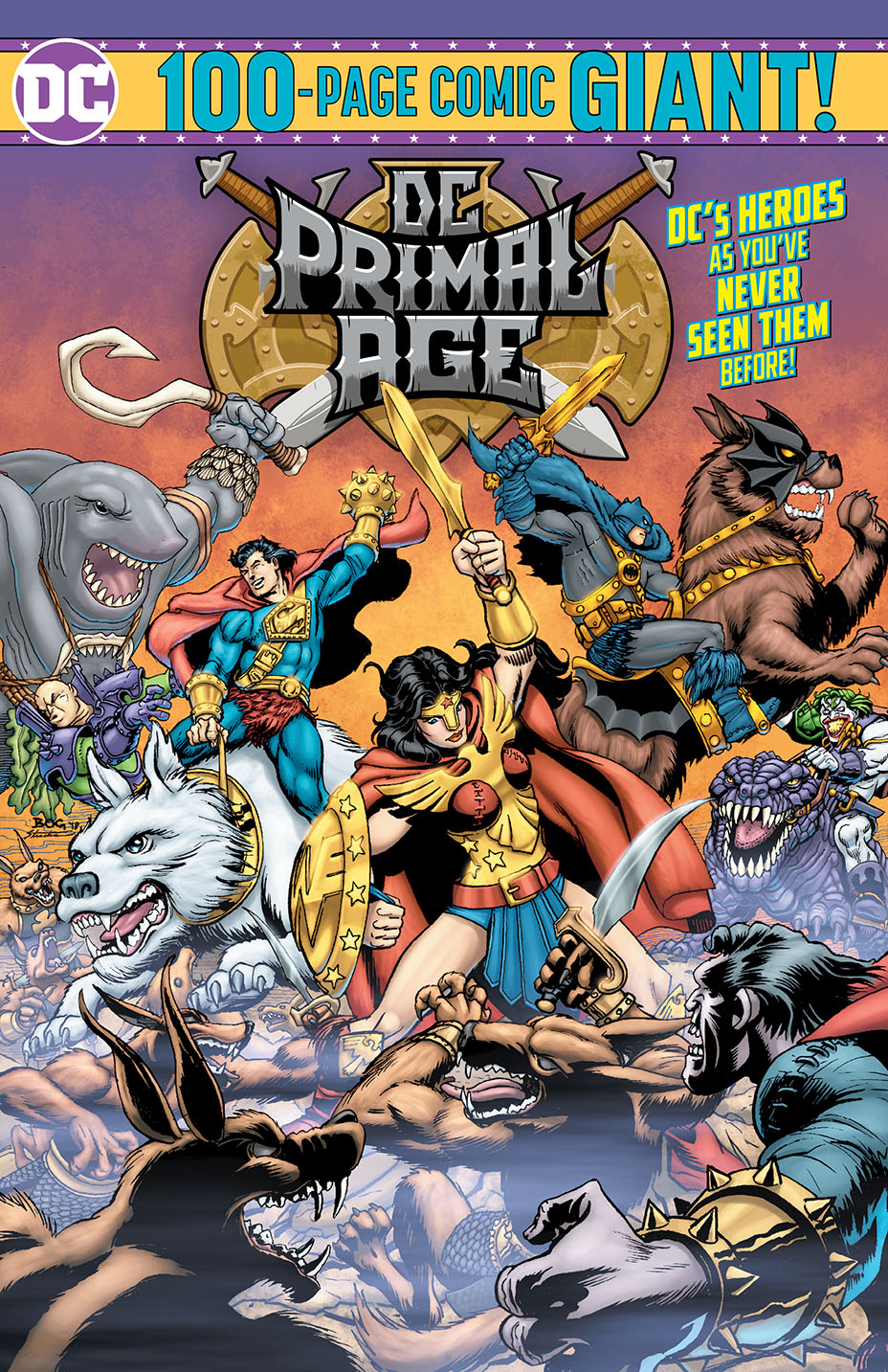 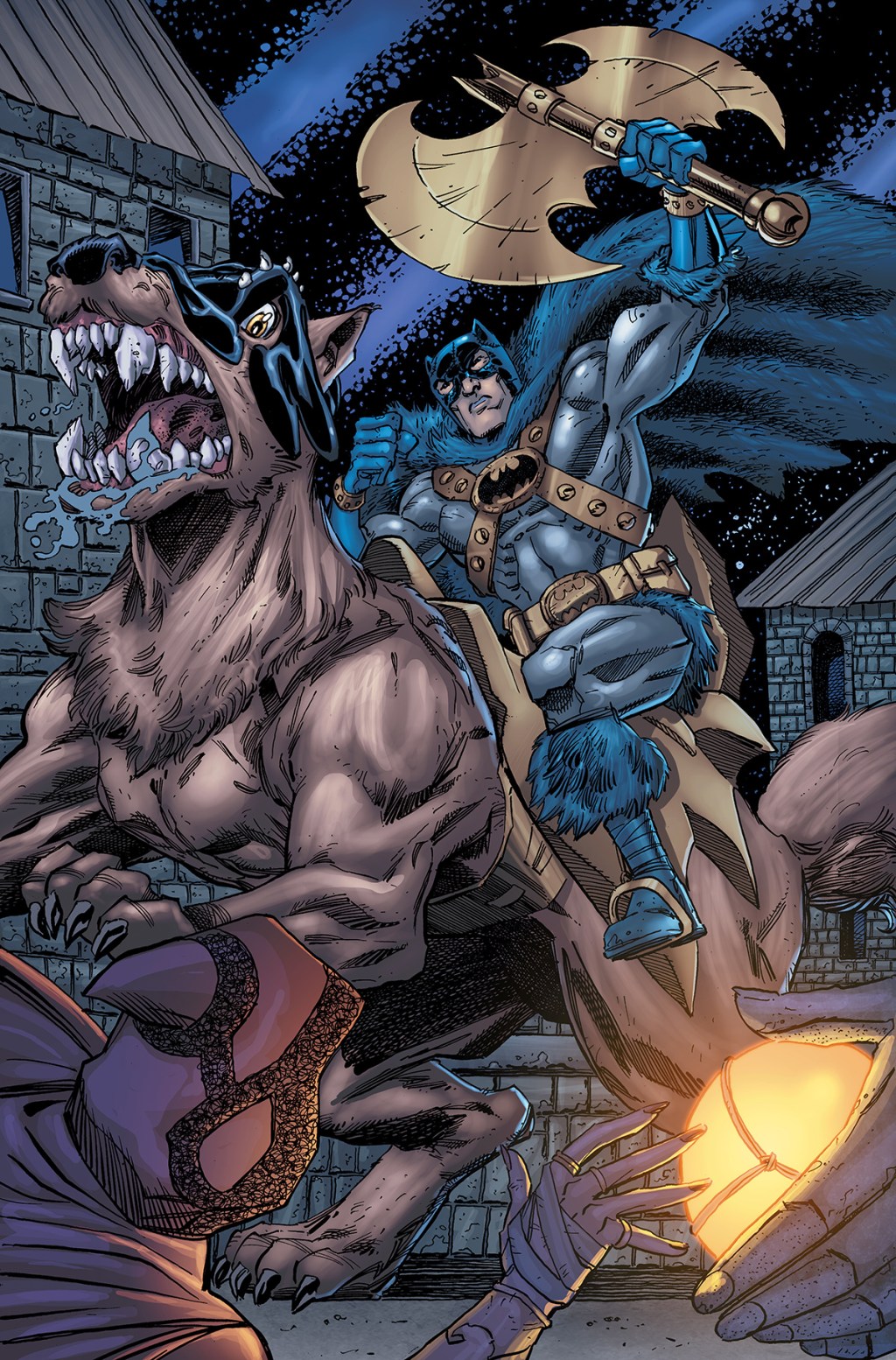 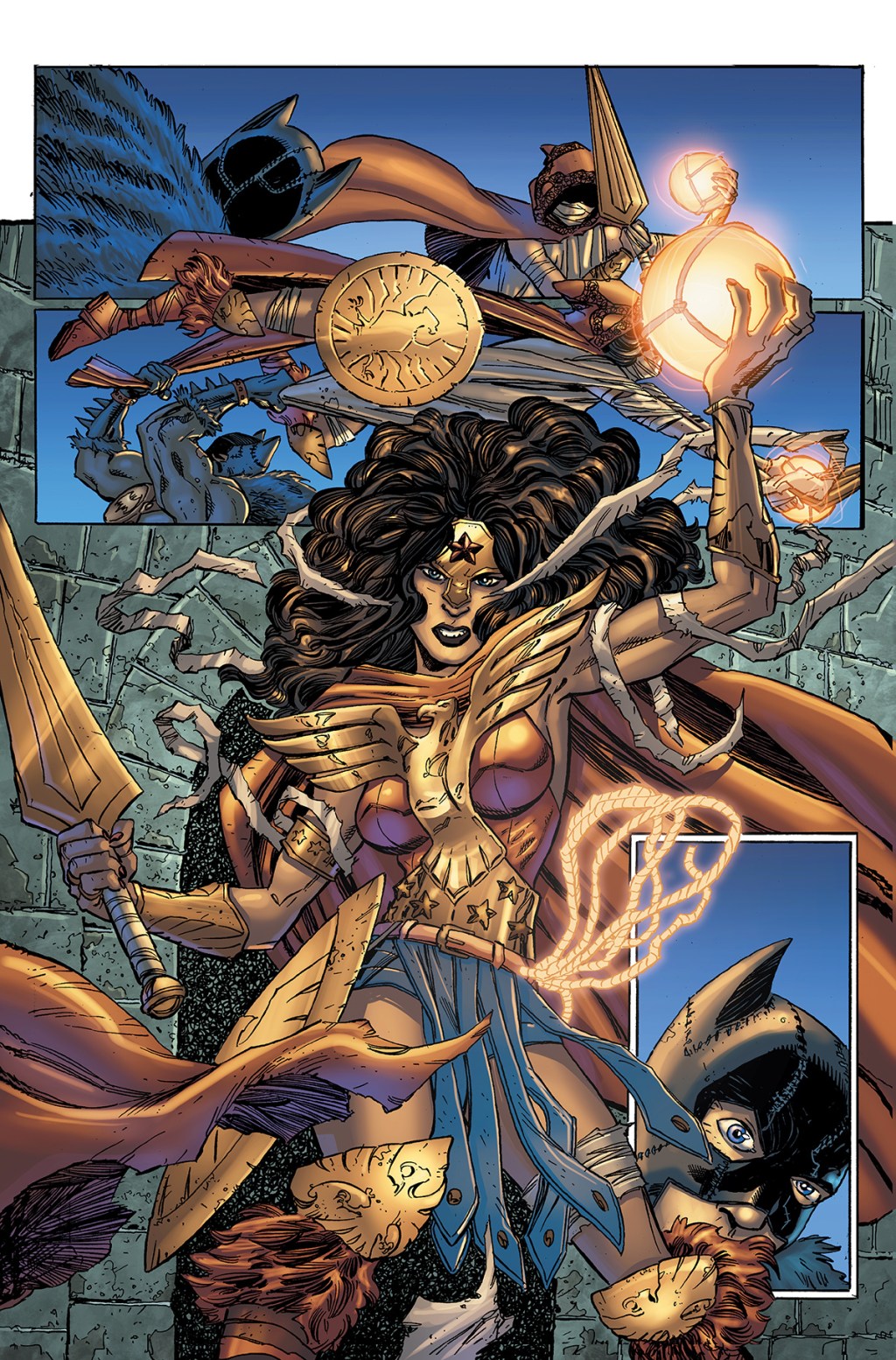 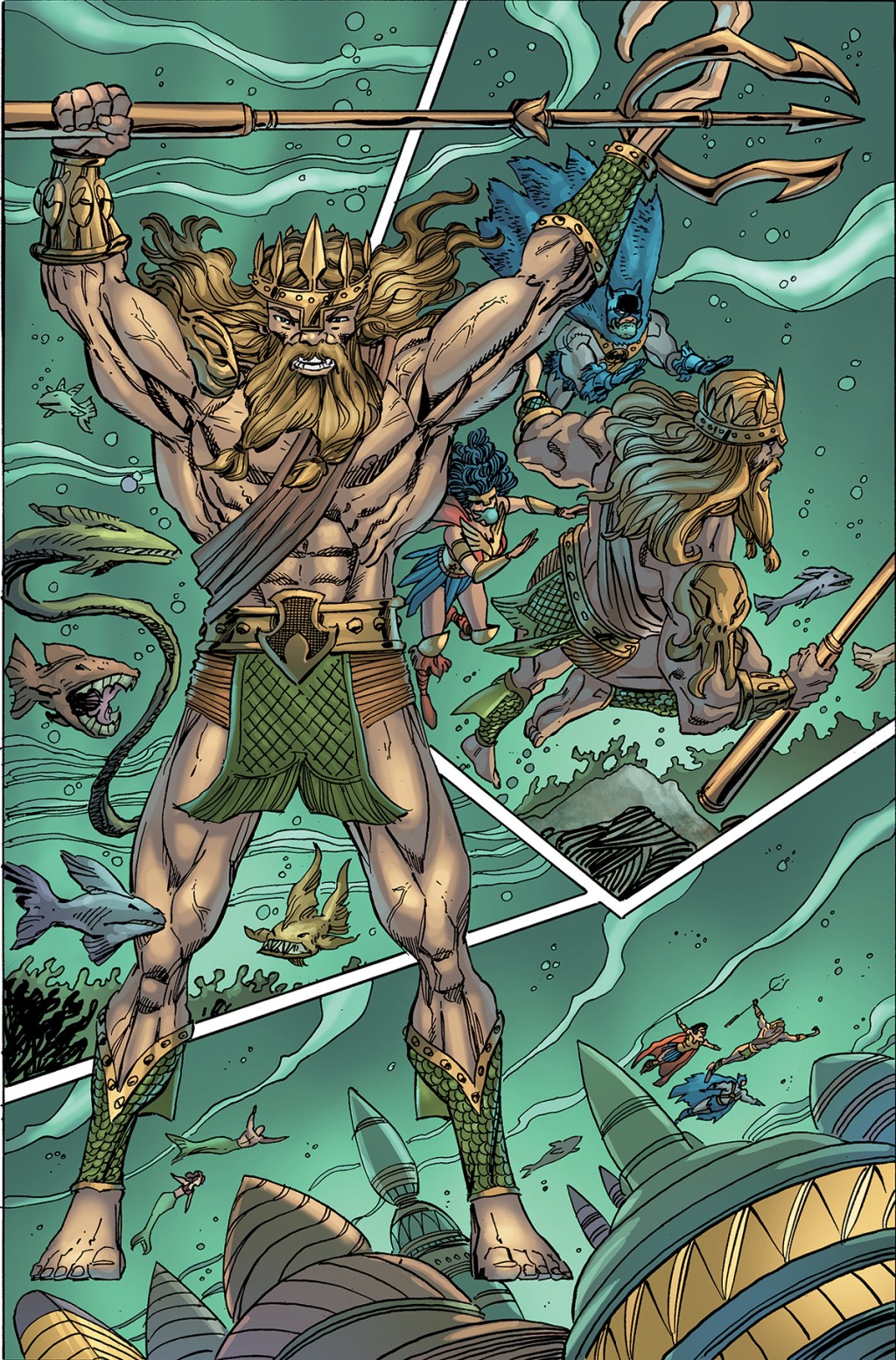 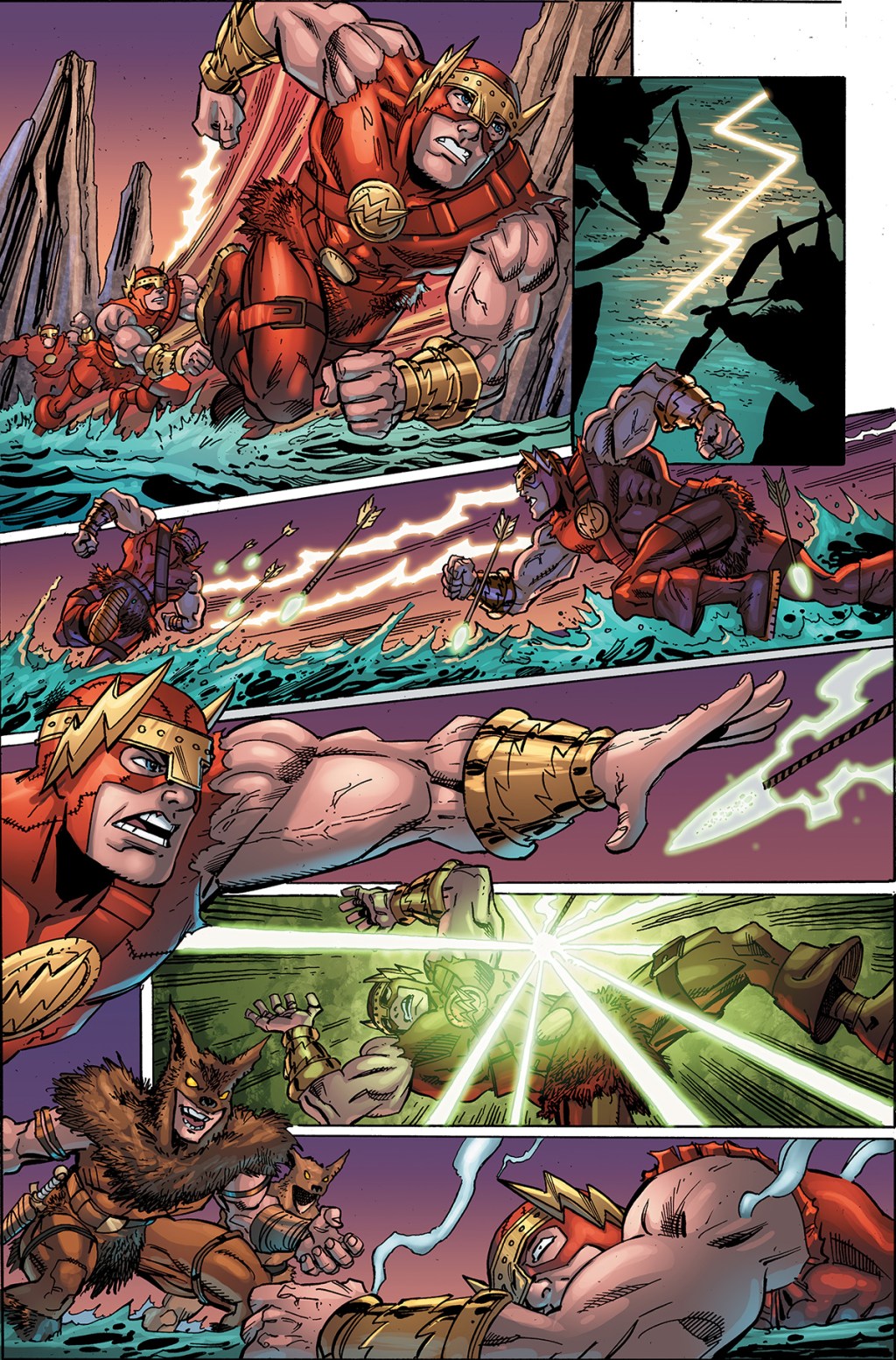 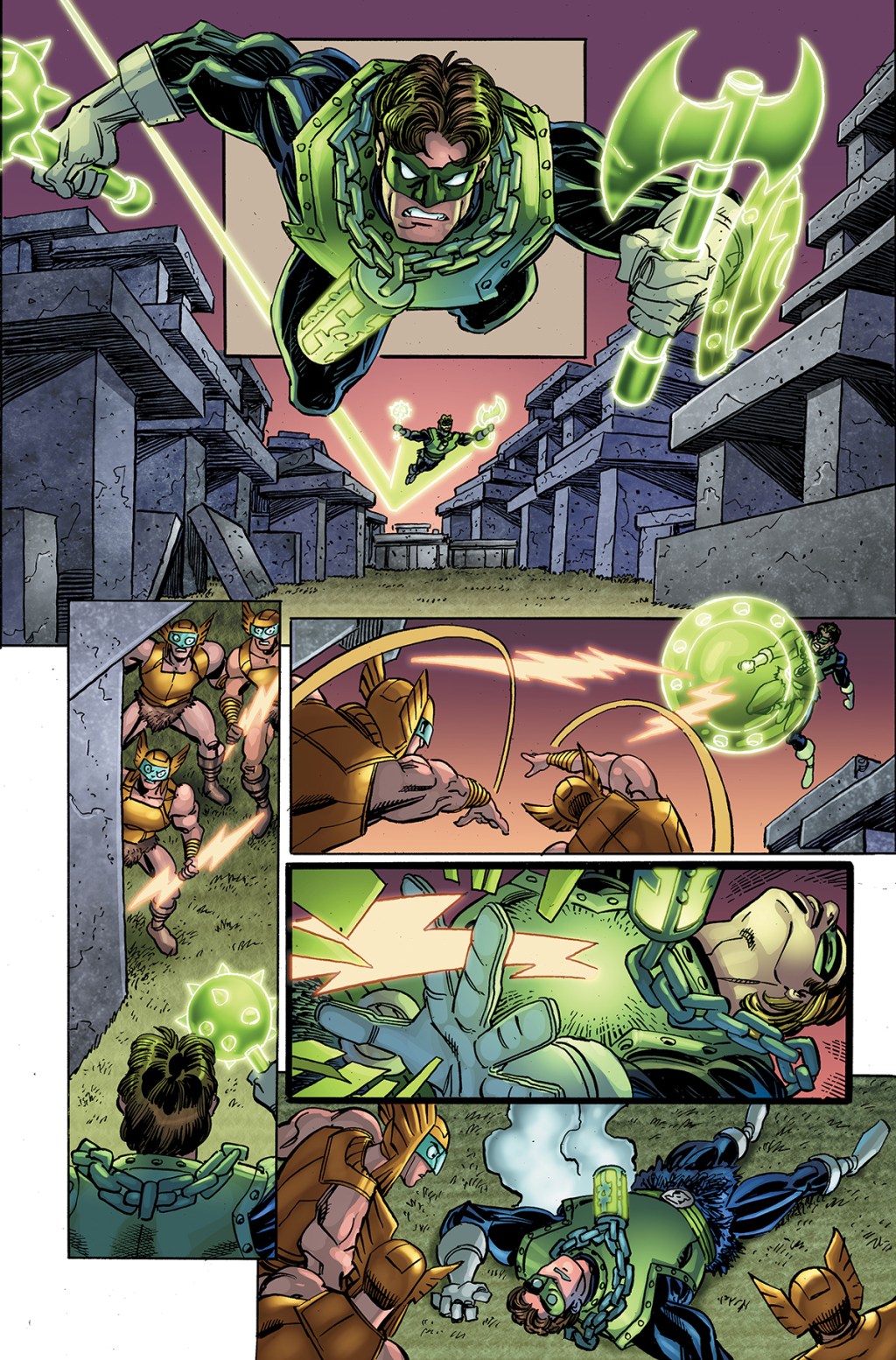 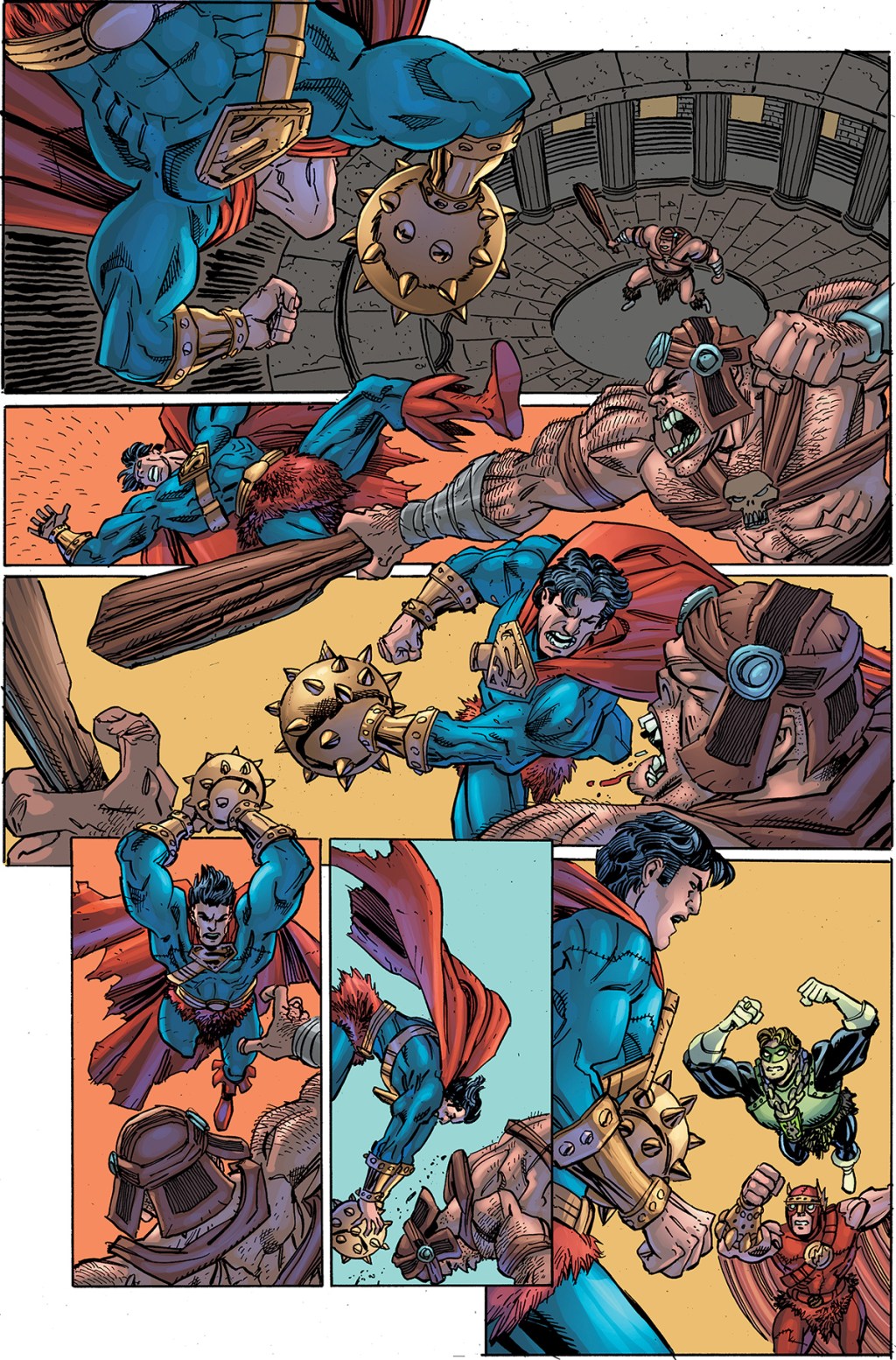 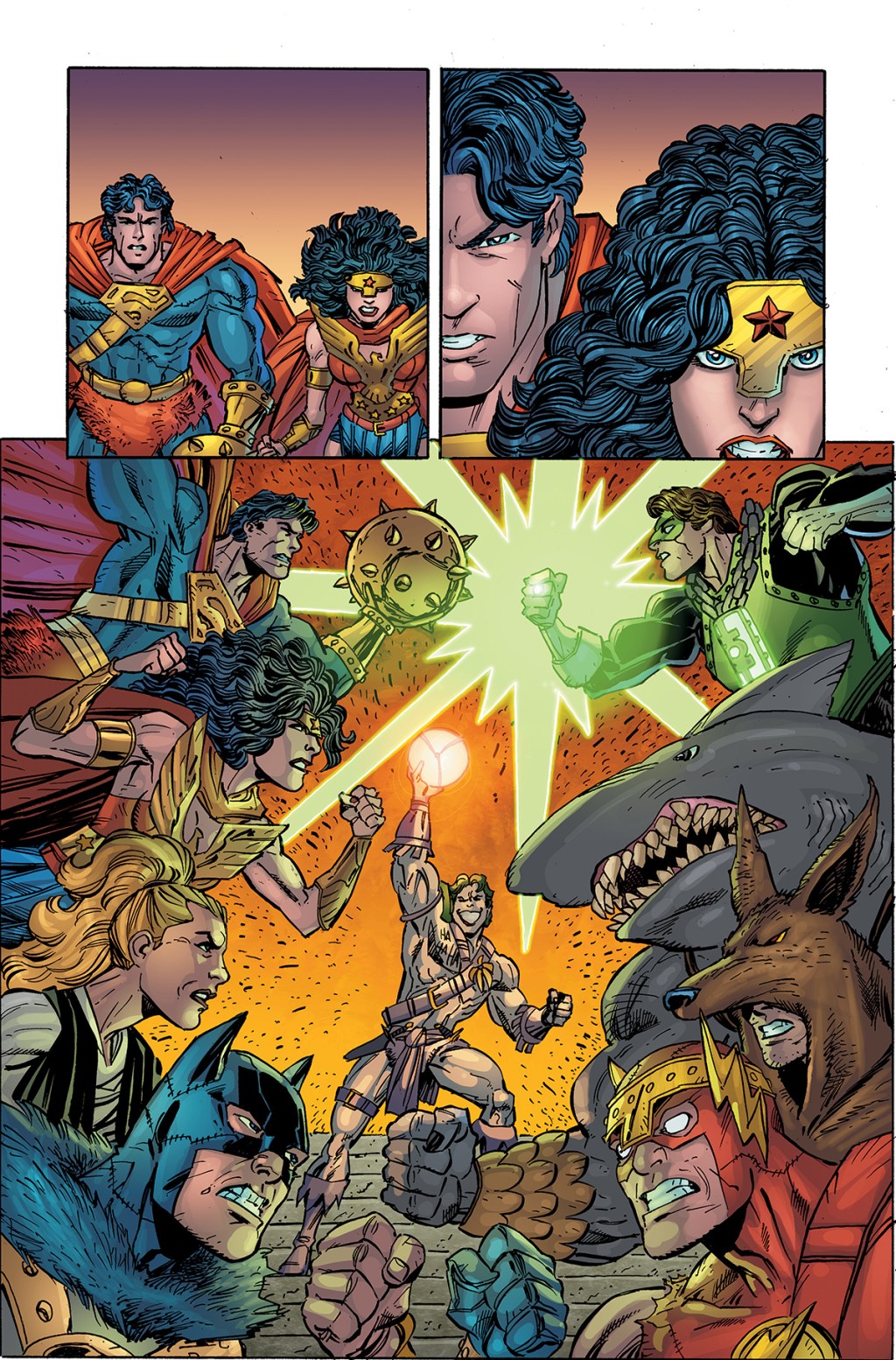 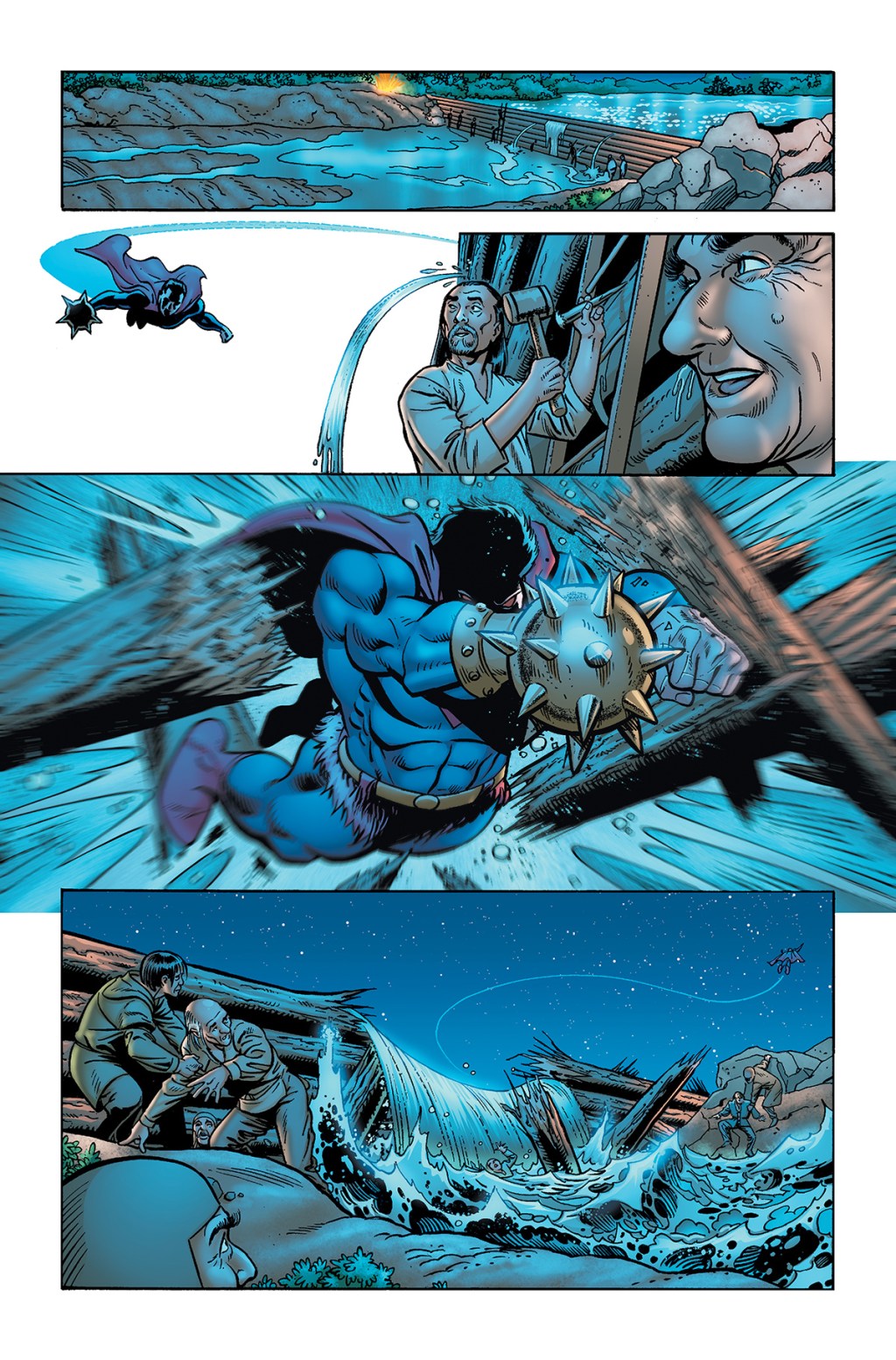 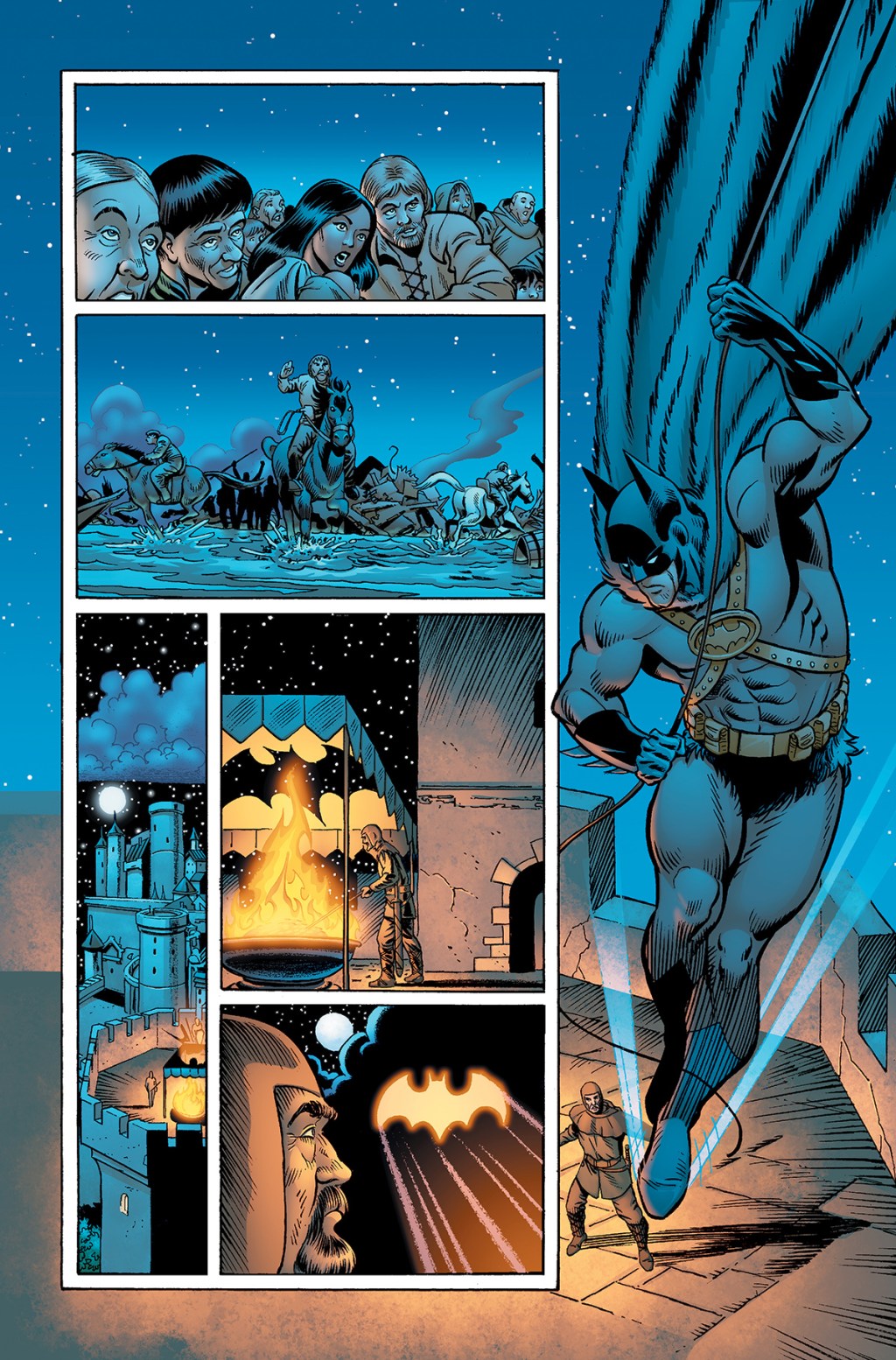