[This story contains spoilers from The Marvelous Mrs. Maisel.]

Donna Zakowska has channeled some heavy-duty style icons in her work as the costume designer of The Marvelous Mrs. Maisel, and the looks she creates for Rachel Brosnahan as Midge Maisel in season three, which premiered Friday on Amazon Prime Video, are no exception.

“The first season was a bit more Audrey Hepburn [for Rachel’s look], while for season two I got a little bit more into Grace Kelly,” Zakowska tells The Hollywood Reporter. “There’s a feeling of Grace Kelly still there in season three, but the first episode opens with Midge at a USO show at a military base, and for that I was inspired by the images of Marilyn Monroe when she did a USO tour [in South Korea in 1954]. Her sexy version of that rugged Army image was a big influence, and then I sort of Midge’d it up.”

Among the key storylines in the eight-episode season three is Midge’s latest gig as the opening act for singer Shy Baldwin, played by Leroy McClain, a tour that takes her from that military base to more glamorous locales, including Las Vegas and Miami Beach. Location filming at the Fontainebleau Hotel in Miami Beach also heavily influenced the season three costumes, Zakowska says. 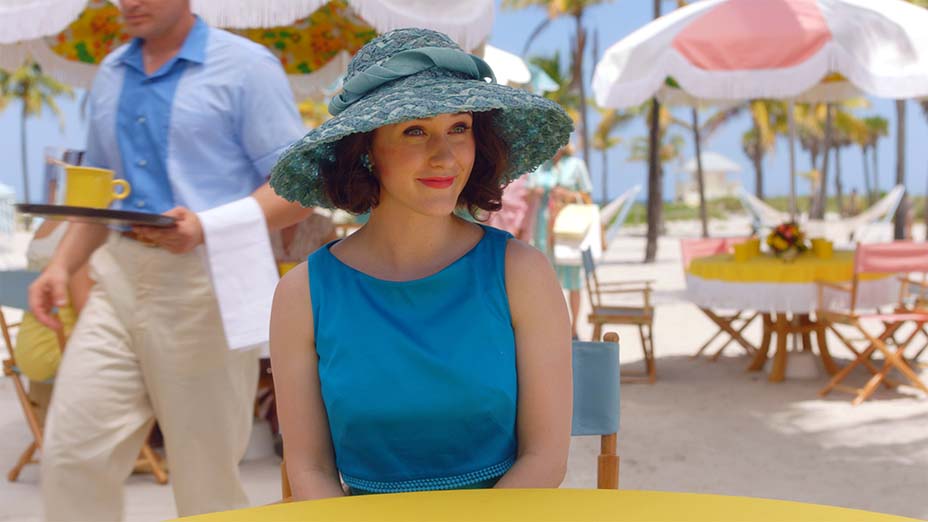 “I got down there about two weeks before filming began, and it was interesting – the bare bones [of glamour] are there, because you see photos of Frank Sinatra on the walls, but then everyone I saw was wearing tank tops and shorts,” says Zakowska, whose work on the show won back-to-back Emmy Awards in 2018 and 2019 in the category of outstanding period costumes. “But being in the space, it was easy to see how bigger-than-life the whole place was at the time in which the show is set. So without question, there’s a very colorful, graphic look to the costumes in Miami, with a Cuban influence playing a role as well. I got into polka dots and stripes, plus we really had a lot of fun with accessories this season.” 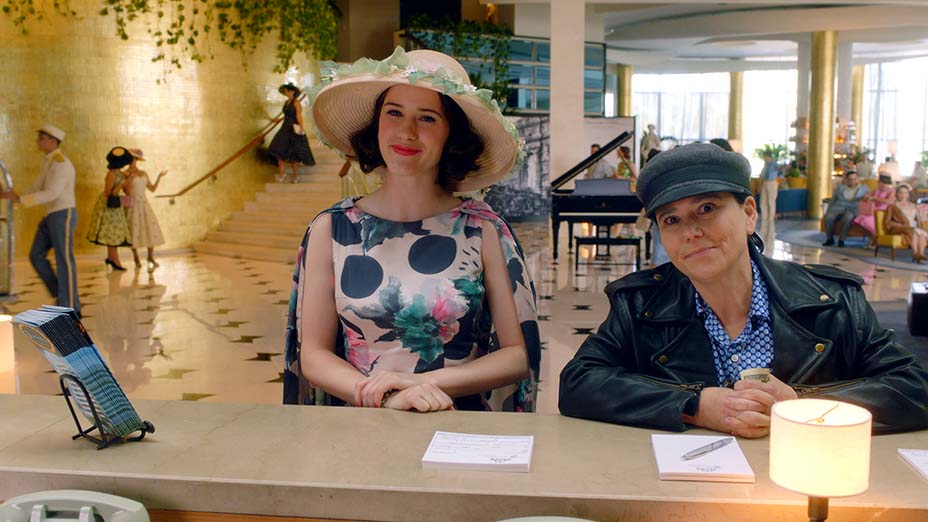 Brosnahan’s Midge indeed embraces color in her Miami-centric looks, in blues, reds and bright floral prints, and always with a matching hat. Other characters likewise enjoyed a style transition. “[Tony Shalhoub’s] Abe has a cabana set that I made for him, and that’s the first time I’ve seen him in a bathing suit, so that was really fun,” Zakowska says. “You don’t see [Marin Hinkle’s] Rose in a bathing suit, but she has some really crazy outfits; when she finally gets to Miami Beach and we first see her, she’s wearing colorful stripes and a large, crazy hat with all these pom-poms all over it.” 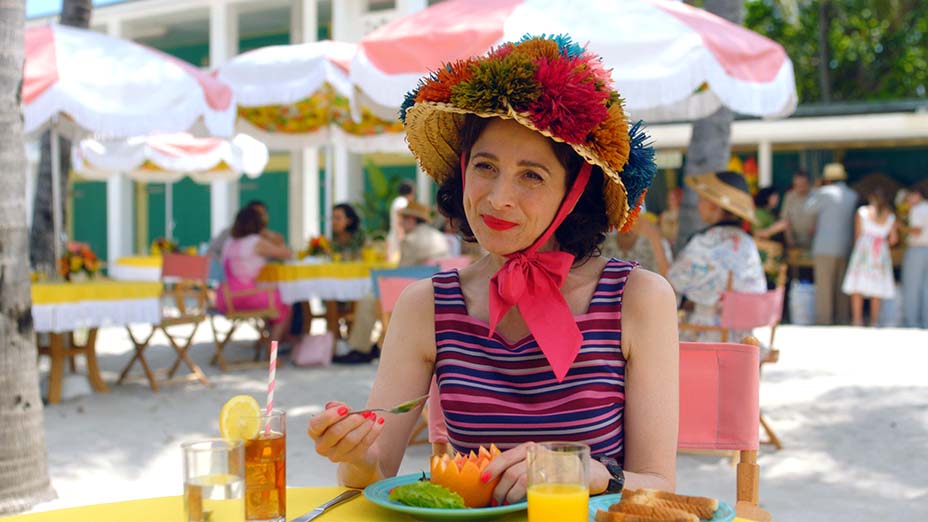 Alex Borstein’s Susie reconsiders her signature androgynous look while relaxing by the Fontainebleau pool. “There’s a funny scene in which she transforms her normal clothing to a bathing suit so she can jump into the pool, but I was able to get Susie into a bathing suit for a later scene, and that’s definitely a crazy moment,” Zakowska says. “Everyone feels a lot more playful here than they were in the Catskills [in season two]; there they were still part of their community, but the Fontainebleau in Miami Beach feels more adventurous for them, so you see all the characters let loose a bit more in their look.” 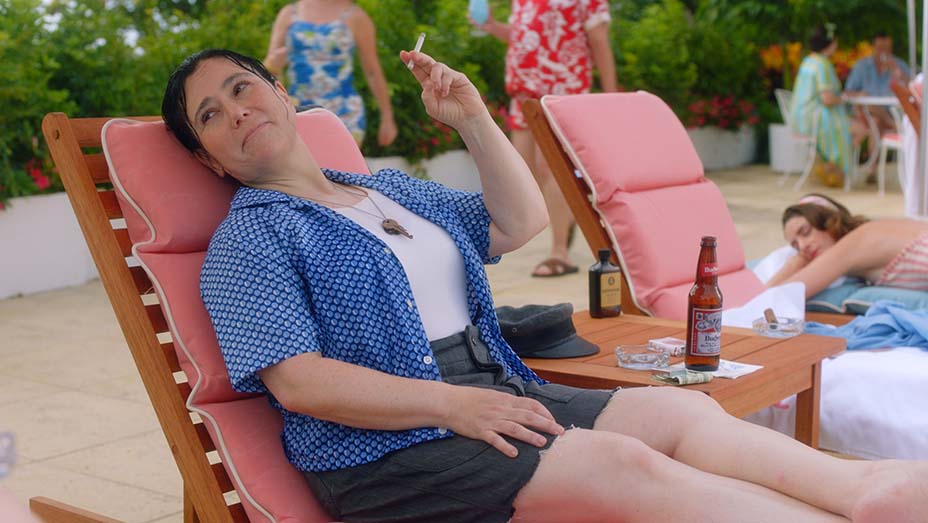 Back in New York, another favorite scene for Zakowska was set in a tea room, where hats once again played an integral role. “Rose has some pretty great looks this entire season, but for this scene I liked the idea of all these flowered hats in this tea room, so it would feel like stepping into a garden,” she says. How was she able to source the quantity of hats needed this season? “For all the principles, I usually like to build everything, so most of the hats you see for them are probably designed for the show. Then others, usually for day players or extras, come from dealers – some from a woman who collected some beautiful hats and wanted to sell them to me – and then vintage stores, online rentals. I have two people on my team, one is a shopper and the other who’s a bit more about finding things – they collect photos of things, and then I’ll go through them all and approve.” 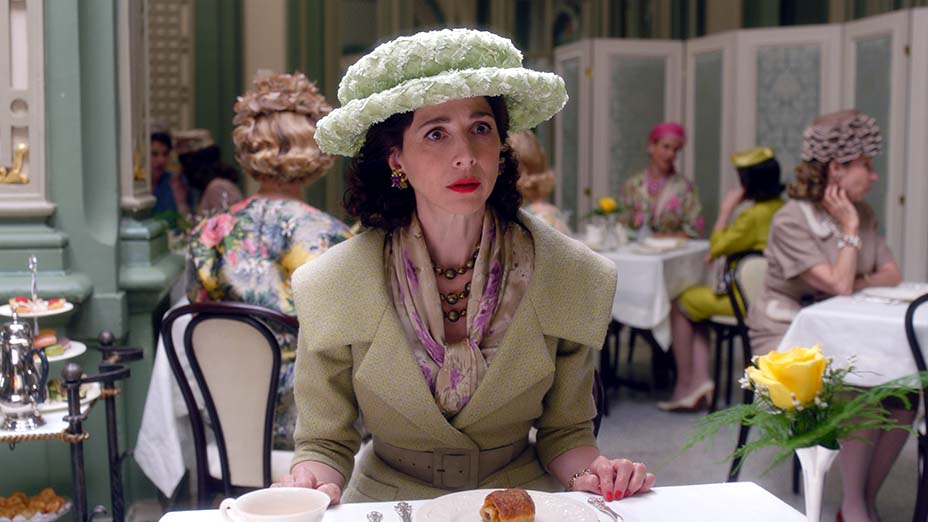 The other highlight of Midge’s season three wardrobe occurs in the finale, which takes place at Harlem’s Apollo Theater. “The Apollo dress was a bit of a challenge, but we really wanted a wow moment for that,” Zakowska explains of the look, a red and pink floral dress with clear sequins and a dropped waist that leads to a full skirt crafted of gathered panels with a prominent front bow and paired with a matching coat in red with a pink silk lining. “Midge is at the Apollo, a theater where the audience really dresses up, so that called for something that felt important – plus I’ve done so many black onstage dresses for her, so it was great to do something in a bright color. That was also a really exciting episode for me, to design the looks for everyone seen onstage at the Apollo, from the dancers to Moms Mabley [played by Wanda Sykes]. We spent two days filming there, and it was so great.”

Season three concludes with Midge on an airport tarmac, and the ivory suit and matching hat Brosnahan wears likewise send a message. “I like the idea of ending the season with Midge in something white,” Zakowska says. “The end of the season typically sees Midge in a bit of a transition, and that [ivory suit] feels transitional. In a way, it’s meant to feel like Midge’s clean slate, as though she’s moving on.”