Amy Sherman-Palladino and her husband, Daniel Palladino, already were well into production on season two of their Amazon comedy The Marvelous Mrs. Maisel when the series became 2018’s awards darling. “It would’ve been a little rough to reshoot half the season if season one hadn’t really worked,” says Sherman-Palladino. “The nice thing is we didn’t actually have that hanging over our heads. We only had that terrible, horrible pain and pressure for season three.”

With Emmy, Golden Globe and a bevy of guild wins for season one and seven Emmy nominations for season two, the pressure is on. THR spoke with the showrunners about the biggest challenges they faced in the series’ second season: filming in Paris and re-creating the Catskills resorts of the ’50s in 2019.

Midge blew up her life in season one. Where did you want to take her in season two?

AMY SHERMAN-PALLADINO The first season was really about her discovering her superpower. Then, when we go into that second season, it’s about, “Now how do I do this? Now that I’ve done this ridiculous thing, how on earth does this work?” For us, half the fun was watching her figure out how she was going to actually become a stand-up comic, what that meant, what developing an act felt like, what developing jokes felt like. Then, eventually, in season two somebody in her family had to find out. That was a given so that she could share the explosion with the rest of the Maisel clan.

DANIEL PALLADINO As far as her family life, which for us is as important as her stand-up life, we wanted to re-create the Catskills. I think a lot of people under a certain age really don’t know what those Catskills hotels were and what they represented, especially to Jewish people back in the 1940s, ’50s and ’60s. We got to show people Paris in 1959, the Catskills in 1959 and a telethon in 1959. We’re always aware of showing a world that has disappeared.

What do you know now that you wish you knew when you started season two?

SHERMAN-PALLADINO How many hours I was going to have to spend in high heels [at awards events]. I haven’t been in high heels for a very long time, and it was terrifying.

PALLADINO Ignorance is always bliss, a little bit, in production. Going into something that is a mystery is great. Shooting in New York was a mystery to us; we were California kids before this. Then the very scope of the show — the fact that it is such a big show and it got even bigger in season two — was a little shocking. If someone had told us exactly how hard this would be, I think it would have given us pause. But because we had no idea — we were just a couple of bumbling idiots walking into this — it all sort of turned out for the best. 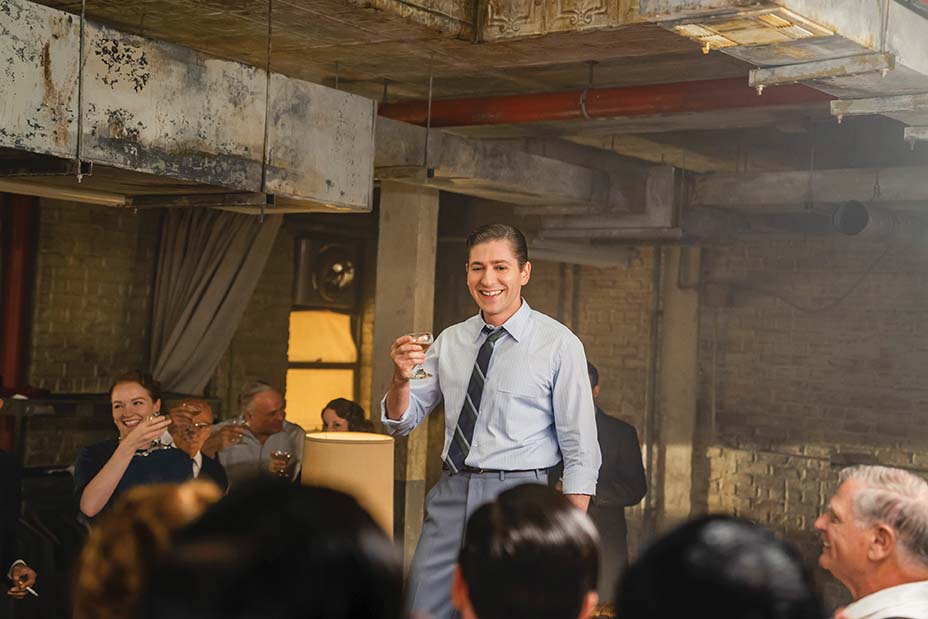 The best day on set was …

SHERMAN-PALLADINO Shooting the Seine, finishing, and looking up and Notre-Dame was there. We got to shoot it before it burned down. On bad days, I’m like, “But you got to shoot in Paris! What do you have to complain about?” That was a pretty great day for me.

And the worst day …

PALLADINO We’ve had deaths of loved ones happen while we were shooting — for us and for some of the cast. Those are the worst because everyone has this feeling of “the show must go on,” and it’s usually someone else saying, “Hey, the show doesn’t necessarily have to go on exactly like this. Take some time.”

SHERMAN-PALLADINO Chernobyl was the thing you didn’t want to watch because you’re like, “Great, in the state of the world, do I want to watch this?” But it was just so damn good.

Which member of your cast would fare best in a Democratic debate?

SHERMAN-PALLADINO Oh, Rachel [Brosnahan] can take anybody down. She’s an incredibly well-spoken, incredibly informed, politically astute young lady. You forget she’s 29 until you make a John Hughes reference and she looks at you like she has no idea what you’re talking about and suddenly you feel like Methuselah. She’s the hammer. Alex [Borstein] too, but they would have to bleep out every other word that she said. So it would be a lot of people trying to guess what the hell she was talking about.

Maisel heads into the 2019 race as the returning comedy champ — but it didn’t have to contend with Veep last year. The scenario recalls 2018’s drama race, when incumbent The Handmaid’s Tale faced a returning Game of Thrones — and lost. And Veep is back for its final year of eligibility. So while Maisel and lead Rachel Brosnahan have retained more season two favor than Handmaid’s did, swiping a swan song from three-time champ Veep seems like a very tall order. —Michael O’Connell

Mrs. Maisel was feeling the moola. Heading into season three of the glitzy Amazon comedy, Rachel Brosnahan renegotiated her deal, standing to make as much as triple her previous salary, potentially earning up to $300,000 per episode, according to sources. She may also get a piece of the show’s backend with her new agreement. Tony Shalhoub also earned a sizable pay raise, to $250,000 per episode, and Alex Borstein was expected to see a nice hike as well. The pay raises came on the heels of Amy Sherman-Palladino and Daniel Palladino signing a new overall deal at Amazon to develop projects, including Ninth Street Women, chronicling five female artists who entered the male-dominated world of 20th century abstract painting. And Brosnahan signed a first-look deal with Amazon in June to develop television projects exclusively for the platform via her Scrap Paper Pictures. She is also set to star in and produce the feature I’m Your Woman for the studio. — Rick Porter