After it premiered in November, ?The Marvelous Mrs. Maisel swiftly became a critical darling thanks to its quick-witted protagonist Midge (Rachel Brosnahan), ?a 1950s housewife who pursues ?a career in stand-up after her husband abruptly leaves her. The show scooped up Golden Globes for comedy series and lead actress in January, and Amazon — which originally ordered two seasons from Gilmore Girls creator Amy Sherman-Palladino (who executive produces and writes with her husband, Dan Palladino) — renewed it for a third in May.

Now deep into writing and shooting their sophomore season, which includes some Midge misadventures in Paris, the pair spoke to THR about finding the perfect lead actress, what to expect in season two and who they hope to run into on Emmy night.

Was there anything you wanted to do in the first season that you weren’t able to, whether from budgetary or creative constraints?

AMY SHERMAN-PALLADINO This is the first time we’ve ever had money ?to do anything; we’ve never had any money on any of our shows. It’s always been a lot of, “OK, ?if you want snow, you can have one pile of snow, and just have [Gilmore Girls characters] Lorelai and Rory walk around that one pile.” So we’ve never had a company just basically say, “We want your vision.” And Amazon did. ?I will say that we found eight episodes tricky for us. We had more story. We wanted to do more ?episodes. But we did our eight. This year, we’re doing 10.

With the demanding dialogue of your shows, how did you know Brosnahan was the right person?

DAN PALLADINO We had a lot of auditions. We had seen a few really, really, really talented actresses who could have done a version ?of the role. But then our L.A. casting director, Jeanie Bacharach, called up and suggested Rachel. Now, we knew who she was, and we knew House of Cards. We were very interested off of that. Because, you know, if a Rachel Brosnahan — who had done all these very, very dramatic roles, and did them very well — is saying, “I want to come in and do this very, very funny role, and I’m going to show you how I would do a stand-up comic,” that right there is a huge calling card. She came in, and there were three scenes to read, difficult scenes — very, ?very different kinds of scenes for these actresses. And she came in, and she just very, very competently went for it.

SHERMAN-PALLADINO She was so smart in the way she approached it and the questions that she asked. We kind of went, “If we’re going to take a chance on anybody, Rachel’s the person to take ?a chance on.” 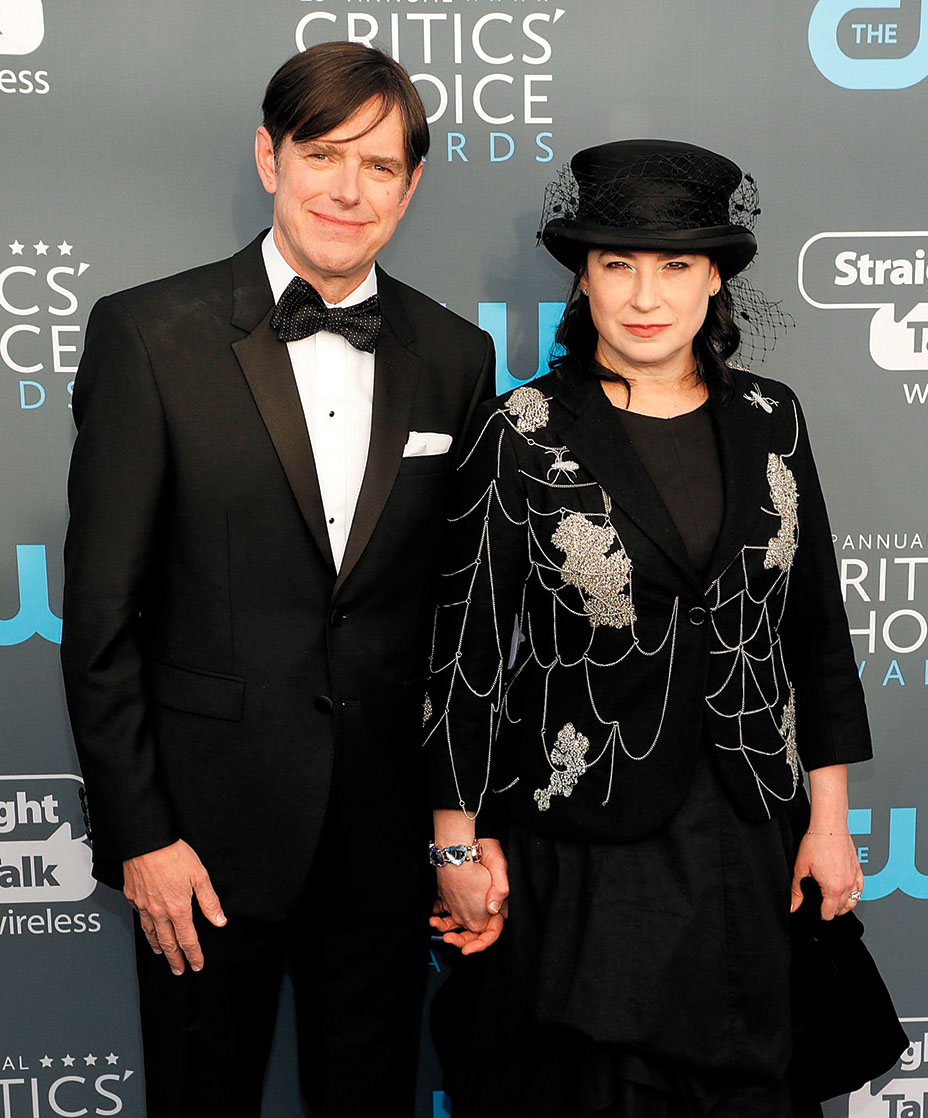 What can you say about season two?

SHERMAN-PALLADINO I can say that our poor line producer is probably sobbing in a corner eating her hair right now. Nobody can accuse us of at least not trying to go for it. Go big or go home. It’s been a very ambitious season.

The show has already been renewed for a third season. How far out have you written the show in your head? Do you know how many seasons you want to go for?

PALLADINO Not how many seasons. We have sort of a general arc. We have it from the very, very beginning of where each individual family member will kind of be, not so much the specifics but really sort of the general arc of Midge’s career, and the family, and how all the family is changing. It’s hard to call out a number of seasons. There will be less than 10, and more than two. How about that for an answer?

Who would you most like to chat ?up at the Emmy parties?

SHERMAN-PALLADINO It’s the only time we get to see [Gilmore Girls alum and current This Is Us Emmy nominee] Milo [Ventimiglia]. ?We love him so much, and I’m always concerned that he’s not eating properly.

PALLADINO And we’ve been running into Alexis Bledel.

SHERMAN-PALLADINO I tend to ?run into Alexis in the bathroom.

PALLADINO We’re pretty reclusive. And the awards shows really thrust you right out into the ?world, and on the red carpet, and it’s something we haven’t done much of. So, it’s been fun meeting the people from Stranger Things and the people from other shows like that who we’ve either known from a distance or have admired from a distance. To be in the same room with Peter Dinklage, that’s going to be fun.

AN AD FOR SUSIE:

Anyone driving ?through the Hollywood area ?in the past few months may have noticed billboards with a note from Susie Myerson encour­aging people to ?call a phone number to learn about her new client. They were part of Amazon’s ambitious awards campaign for the show, which centered on Susie’s (Alex Borstein) attempts to drum ?up more business. Folks who called ?the number would speak with a live person, an actor playing a character ?at the Gaslight comedy club (where Midge, played by Rachel Brosnahan, first discovers her stand-up skills). Plus, the first 150 ?who phoned received a limited-edition 7-inch vinyl record of music from the series. Amazon also sent out ’50s-style postcards from Susie pushing people to meet her client, who “is so funny, she makes Lenny Bruce blush.” The retro campaign helped Mrs. Maisel score 14 nominations for its inaugural season. 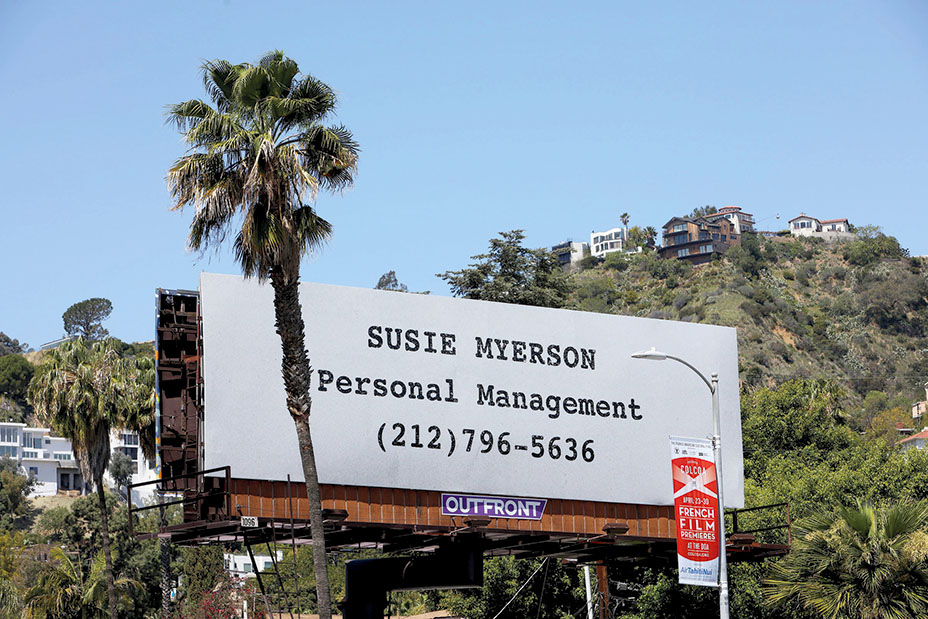 “The Marvelous Mrs. Maisel clearly isn’t ?a rags-to-riches story nor a typical look at ?comedy where the broken central figure hides her inner darkness behind humor. Nope, Miriam had it all and is happy — her ?life goes not so much into free fall as it does ?in an intriguing new direction. That counterintuitive look at Miriam is also partly what makes the show so appealing — you could probably make the protagonist into a ?bleak, cynical barfly or something, but why would you? The upbeat optimism of The Marvelous Mrs. Maisel is a baked-in Sherman-Palladino formula that worked with Gilmore Girls and makes this new series addictive.” — Tim Goodman, Nov. 26

A Golden Globe doesn’t typically offer much in the way of Emmy “heat,” but The Marvelous Mrs. Maisel‘s big HFPA win ?in January is the closest thing to a rubber stamp in this year’s wide-open, Veep-free comedy race. A breakout for Amazon as things got complicated for its awards darling Transparent, Mrs. Maisel has earned wide industry affection — a welcome reason for the streamer to gloat while it waits for the stench of disgraced former programming chief Roy Price’s departure to dissipate. But are Academy voters ready to mint a side project from the monopolistic online retailer as the best comedy in all of television? That certainly seems like a much bigger hurdle than Mrs. Maisel‘s genre fluidity: Amy Sherman-Palladino and Dan Palladino’s pricey, ?polished hourlong dramedy is hardly a conventional laugher. The duo famously evaded Emmy love with Gilmore Girls for similar reasons, but the TV Academy has since become much more open-minded about what constitutes a “comedy.” — Michael O’Connell