The role of the caregiver, its overlaps and conflicts with the regular instincts of motherhood, and its erosion of the capacity to remain a vital individual, independent of that consuming responsibility — those factors and more are given nuanced consideration, with neither sentimentality nor sanctimony, in Amy Herzog’s Mary Jane. Confirming its author as one of the most lucid and sensitive American playwriting voices to have emerged in the past decade, this beautiful new work is directed with ultra-naturalistic subtlety by Anne Kauffman and acted by an exemplary five-member, all-female ensemble that takes that same cue, led by Carrie Coon in a performance as wrenching as it is restrained.

In a welcome return to the New York stage that follows her breakout television roles in The Leftovers and Fargo, Coon plays the drained but resilient title character, whose two-and-a-half-year-old son Alex was an extreme-preterm infant born with cerebral palsy and a short life expectancy. Alex is barely glimpsed in the play, and yet he’s as vivid a character as his mother or any of the women she encounters in a series of scenes ranging from the mundane to the deeply distressing, in which small gestures or words of kindness strike chords no less plangent than the notes of pain.

By virtue of its elegant structure, its expository economy, its gentle humor, fine-grained characterizations and knack for sharp observation cloaked in seemingly casual glimpses of a life, Mary Jane sidesteps the banalities of the medical drama to become something richer and more humanistic, albeit laced with a grounded spirituality.

Anyone who has witnessed what happens to a family member or friend when the care of an incapacitated loved one becomes their defining purpose will recognize aspects of Mary Jane’s behavior and the strength she must summon to get through each day. But what’s perhaps most notable about this play, and Coon’s performance, is the refusal to trumpet the character’s quiet heroism. Mary Jane faces challenges that in the hands of other writers might be fodder for speechy histrionics — such as a threat to her livelihood and health insurance, or the lack of a support network, beyond medical professionals. But she takes these and other obstacles on board with a necessary pragmatism that excludes self-pity.

The play opens with Ruthie (Brenda Wehle, just wonderful), the superintendent of Mary Jane’s apartment building in Queens, New York, busy unclogging the kitchen sink. The torrent of conversation spewing from Mary Jane suggests a woman starved for company not predicated around her son’s health, even though the breathing-monitor signals coming from his bedroom make that central focus in her life abundantly clear. “You seem to be someone who’s carrying a lot of tension in her body,” notes Ruthie, with the same matter-of-fact tone she uses to discuss a blocked drain or a sibling’s cancer.

That character’s directness has echoes later on in a Buddhist hospital chaplain, also played by Wehle, just one example of a carefully thought-out double-casting scheme that gives the intermissionless play’s two distinct parts a unifying balance.

In the early scenes that establish Mary Jane’s uncomplaining fortitude, there’s poignancy both in her endurance and in her cheerful determination to continue to show an interest in other people’s lives. That applies whether it’s Sherry (Liza Colon-Zayas), one of the more dependable registered nurses who looks after Alex at night, so Mary Jane can grab some shut-eye on the pull-out living-room sofa bed; Sherry’s niece Amelia (Danaya Esperanza, a real discovery), a fugitive from her overbearing mother in North Carolina; or Brianne (Susan Pourfar), a Facebook friend whose baby was born with a similar condition to Alex, with whom Mary Jane eagerly shares advice on equipment and healthcare entitlements.

Mary Jane even makes excuses for Alex’s AWOL father, insisting that he tried but was unable to cope with the stress; and for a night nurse who fell asleep on the job, failing to wake up to the sound of Alex’s oxygen monitor.

Herzog’s point is not to make Mary Jane a selfless saint, but to show how hard she works to avoid bitterness and to maintain her engagement with a world outside her son’s immediate sphere, despite having zero personal life. In the flickers of apprehension in Coon’s eyes and the ripples of fear beneath the character’s self-possession, we see the cost of her struggle. Even just maintaining a train of thought can be tough for her. When a doctor (Colon-Zayas) tactfully informs her that any adverse radiation effects from daily chest x-rays would take 20-30 years to register — leaving unspoken the unlikelihood of Alex being around that long — Coon’s entire face collapses for a heartbreaking instant before Mary Jane recovers her composure.

When she inevitably does crack — venting her frustration with a pediatric music therapist (Esperanza) from an understaffed unit, or uncorking the emotional stopper with Wehle’s Buddhist nun during the onset of a migraine — the effect in Coon’s predominantly internalized performance is shattering. Her simple admission, “I don’t know what to hope for anymore,” feels like the saddest words ever spoken.

Carrie Coon Chats With Damon Lindelof About 'The Leftovers' Impact: "I Had Journalists Weeping" (Q&A)

One of the play’s loveliest interludes is an extended exchange between Mary Jane and Chaya (Pourfar), an Orthodox Jewish mother of seven children, one of whom is hospitalized in the same intensive care unit as Alex. This is Herzog at her best, establishing the two women as creatures of very different worlds, warily assessing one another before exploring first their differences and then their mutual understanding in a scene loaded with humor, compassion, bone-deep weariness and lingering melancholy. While Mary Jane lists religion on the hospital chart with a question mark, the play never patronizes as it touches on questions of faith.

The finest of the gifted Herzog’s previous works — After the Revolution, 4000 Miles, Belleville — all dealt with families or couples. This is her first play focused so squarely on a female protagonist and the women in her orbit, though remarkably, its gender specificity in no way limits the universal aspects of its thoughtful observations on human nature.

While the entire cast performs with real warmth and feeling, everything is understated and unerringly believable. Kauffman’s work here is invisible in the best sense, aside from a stunning scenic coup de theatre comparable to what the director and her design collaborator Laura Jellinek pulled off in Adam Bock’s haunting 2016 play, A Life. The set literally cracks open, turning itself inside out in direct correlation with the paroxysms of anxiety ripping through Mary Jane’s mind.

This is a delicate play whose effect creeps up on you incrementally as the devastating weight of Mary Jane’s world becomes clear. And while the work feels deeply personal, not political, the relevance of its snapshot of lives in the balance amid the ongoing travesty of Republican efforts to sabotage the average American’s access to affordable healthcare will escape no one. 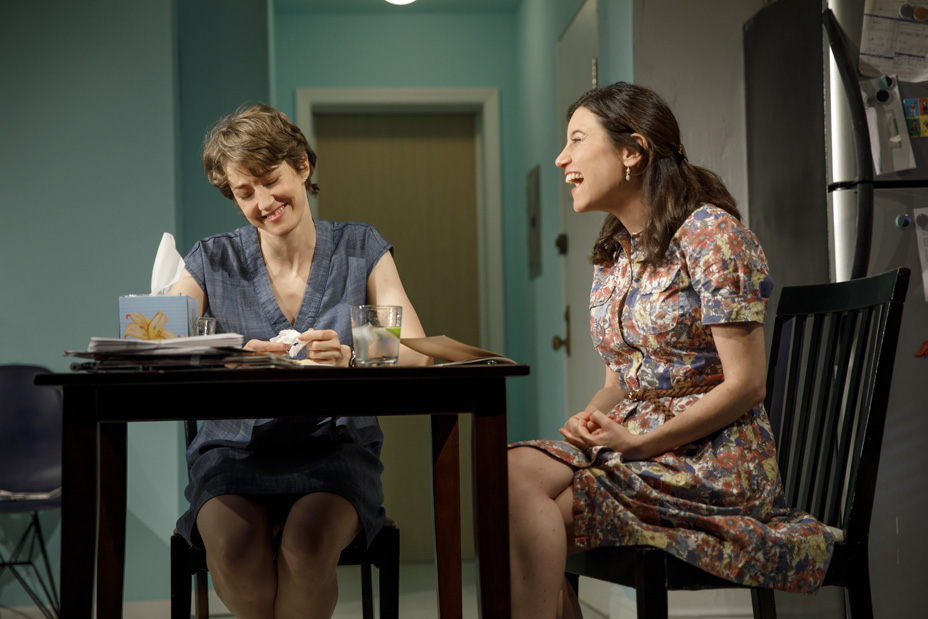