It’s a testament to the sensitivity of Lila Neugebauer’s production of Mary Page Marlowe, and the subtle connective thread binding the half-dozen actresses playing the title character at various ages, that the silences are when Tracy Letts’ drama achieves its sharpest poignancy. Probing yet unsentimental in its clear-eyed compassion, this is a fragmented portrait of an ordinary life, distinguished by writing that plumbs emotional depths without ever surrendering its exquisite restraint. The unimpeachably naturalistic dialogue reveals major and minor shadings throughout, but it’s in the brief wordless moments of overlap during scene changes, when one Mary Page regards another version of herself at a different time, that the play’s quiet force creeps up on you.

Those glances physicalize the very essence of the Joan Didion quote with which Letts prefaces his script: “I think we are well advised to keep on nodding terms with the people we used to be, whether we find them attractive company or not. Otherwise they turn up unannounced and surprise us, come hammering on the mind’s door at 4 a.m. of a bad night and demand to know who deserted them, who betrayed them, who is going to make amends.” The necessity of that acquaintance for Mary Page extends also to the person she will become.

Dramatic works that take their names from their female protagonists tend to summon associations with movies — melodramas like Harriet Craig, noir potboilers like Mildred Pierce, kitchen-sink social realism like Vera Drake or fact-based stories of determination and heroism like Norma Rae or Erin Brockovich. Letts appears to know what he’s doing in subverting expectations by giving his play a title that wouldn’t seem out of place on a 1940s “woman’s picture,” as they once were reductively labeled. But unlike most films of that genre, Mary Page Marlowe is concerned with finding the pathos, the melancholy beauty in a life that in most respects is unremarkable. In fact, the playwright goes even further by relegating the defining events of that life mostly to between-scenes interludes. The most awful tragedy that strikes Mary Page is conveyed only in anticipation, and in the dreaded ring of a telephone.

The play opens with Mary Page Marlowe at 40 (played here and a few years later by the terrific Susan Pourfar), breaking the news of her impending divorce and interstate relocation to Kentucky to her two children in the neutral space of a Denny’s diner booth in Dayton, Ohio. We get none of the standard markers and few of even the hindsight assessments of marital breakdown. Instead, Letts boils it down to the bare-bones, sanitized version that separating parents tend to give their children. 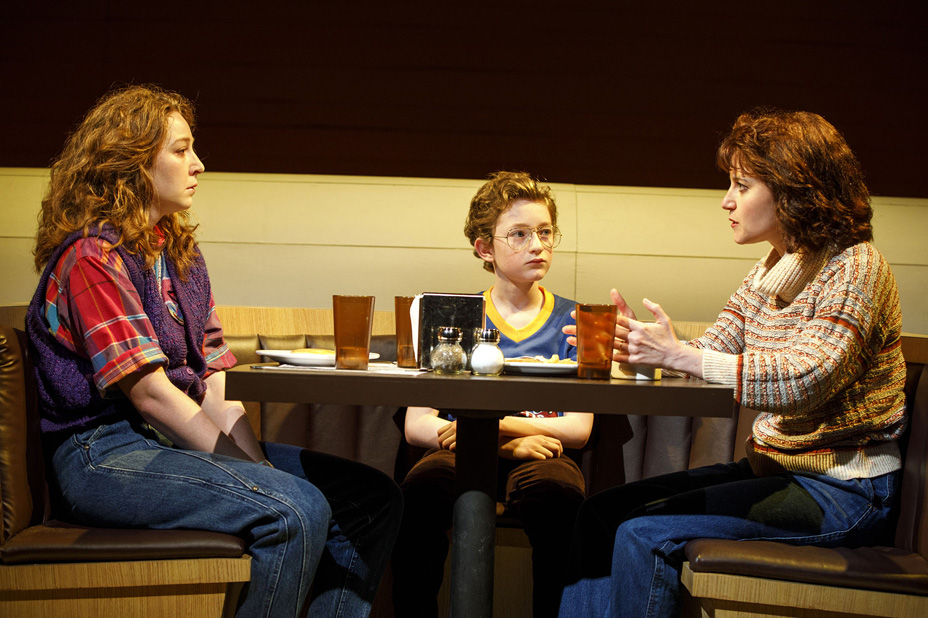 Director Neugebauer and her actors expertly map the contrasting behavior of Mary Page, keeping it together with frequent difficulty; her 15-year-old daughter Wendy (Kayli Carter), angry, hurt, able to see the upheaval only as it affects her; and her 12-year-old son Louis (Ryan Foust), oddly detached from it all, intently focused on his geography homework. His only question is what happens to the dog. It’s a great opener that grabs you emotionally from the outset, and it establishes a sidelong approach that will continue to disclose wrenching observational insights throughout.

Other major incidents that might have constituted the meat of another playwright’s work also are revealed indirectly, either in their aftermath or at a midpoint in their development. The 50-year-old Mary Page (Kellie Overbey, tremendous), her face bruised and her arm injured, steels herself through a discussion with her second husband Ray (David Aaron Baker) of her options after her third DUI charge, which resulted in a near fatality. She remains matter-of-fact, unemotional as she outlines decisions she has made without him, exploding only when the angrily frustrated Ray presumes to tell her how she feels. It’s a moment of startling power, played to shattering effect by both actors.

A pattern begins to emerge of numbness and disappointment that’s made all the more distressing because we’ve seen the college-age Mary Page (Emma Geer), still open to possibility. During a gorgeous tarot-reading scene with her roommates (Tess Frazer and Audrey Corsa), they reveal that they see Mary Page as a person who radiates love and hope and dreams, while she’s still figuring out how she sees herself.

The scenes are non-chronological, so there’s a puzzle element to the play as it breathes and contracts under Neugebauer’s sure hand, shuffling the episodes of the central life and those connected to her in seemingly random order.

For instance, we watch 63-year-old Mary Page (the brilliant, ineffably grounded Blair Brown) receive the news that she’s now free of all parole restrictions, while watching House over dinner with her affectionate third husband Andy (Brian Kerwin) and struggling to grasp the basic functions of DVR. Immediately after, she’s 9 months old, crying in her crib as her mother Roberta (Grace Gummer) and World War II vet father Ed (Nick Dillenburg) fight over his incapacity to be husband material. Next comes Mary Page (Tatiana Maslany), now 36, in a prickly session with her therapist (Marcia Debonis), during which talk of an abortion and extramarital affairs surface.

Stepping into a role played in the drama’s 2016 premiere at Chicago’s Steppenwolf Theatre by Letts’ wife, Carrie Coon, Maslany makes an assured New York stage debut, wrapping spiky layers of defensiveness around a core of careful composure and gnawing dissatisfaction. She’s at her best in a knockout scene where Mary Page, in her late 20s and still on her first marriage, has just slept with her accounting firm boss (Gary Wilmes), who’s also married. He’s flattered that she came on to him, but as she’s busily dressing to leave he gets more insistent about scheduling repeat trysts. When firm but tactful deflections fail, she uses sex, the only kind of empowerment available to her, to take control of the situation. 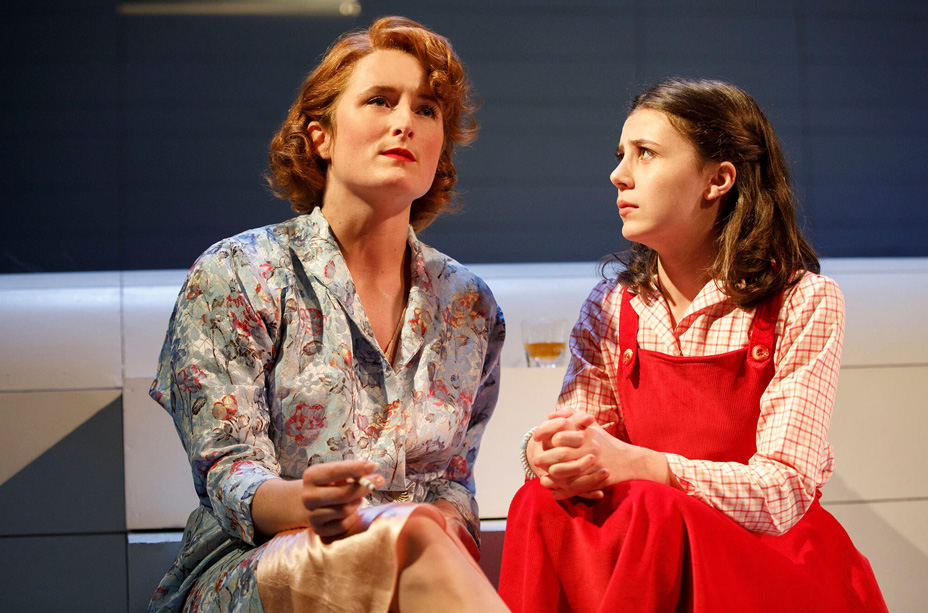 There are shades of hard-edged inscrutability in Mary Page, who can also be stubborn, as Andy points out. But Letts surveys her life with uncommon empathy, never judging her missteps or seeking to place blame. Nor does he patronize her with sweeping apologies for the inherent weaknesses of men, in the way that another current female-focused play by a male author, Dennis Kelly’s Girls & Boys, does. There’s tenderness, too, in the juxtaposition of the 12-year-old Mary Page (Mia Sinclair Jenness), anxious and vulnerable, with Brown as the woman near the end of her life at 69, now more serenely accepting of the roads she’s been steered down by fate, uncontrollable circumstance, the choices she made and those made for her.

In the younger scene, her mother Roberta now appears considerably hardened, declining to sugar-coat her assessment of Mary Page’s song choice and vocal abilities as she rehearses for a school assembly performance the following day. She then tells Mary Page she’s leaving her with her grandmother for a spell while she heads to California to chase down Ed, who has abandoned them. In those moments, played with steely resolve by Gummer, we get a glimpse in Roberta’s strong-willed brittleness of the person Mary Page will become, and likewise her daughter Wendy, who matures at 20 from a sullen teen into a perceptive young woman, too smart to be anything but candid with her mother.

Scene transitions occur with a fluidity that echoes that of the life being examined; set pieces glide on and off a two-level base unit by designer Laura Jellinek that’s almost surgically austere and yet becomes the canvas for extraordinary depth of feeling, amplified in Bray Poor’s pensive music. This is an unusually large cast for an off-Broadway production — with 18 actors and no doubling outside of the same person at different ages — but there’s not a weak link in the ensemble or a character that doesn’t feel fully rounded.

Tightly constructed as a 90-minute one act without a single non-essential scene, the drama closes with an episode not from the end of Mary Page’s life but from at least a decade earlier, an exchange both layered with meaning and crisply, happily quotidian. It’s a perfect summation of a play that is simultaneously expansive and a work of detailed miniaturist portraiture. When all the Mary Pages appear onstage together, drifting by one another as if in a dream, it’s an almost unbearably moving image. It also serves as a contemplative prompt for us to follow Didion’s advice, to think back on the younger selves that have brought us to where we are now and where we’re headed.

As of this past spring, producing company Second Stage has expanded and now runs a small Broadway theater dedicated to the work of living American playwrights. This is exactly the kind of play that belongs there.