“One of the great things about these days, everybody gets to comment,” says Matt Groening, the usually press-shy animation pioneer who’s made a few headlines recently — some for his departure from Fox with animated series Disenchantment (set to launch on Netflix with 10 episodes Aug. 17), some for his responses to criticism of the Indian immigrant shopkeeper Apu (voiced by Hank Azaria) from his long-running hit The Simpsons. Speaking with THR on July 26, at the midpoint between his appearances at Comic-Con and the TCA press tour, Groening, 64, seems conflicted about ?the criticism. Is it fair to ask a creator to change a long-standing character he loves because ?the cultural context has shifted? “No,” he replies. Then, a moment later, “It’s a free country. Everybody gets to pipe up.”

With Disenchantment, set in the medievalesque kingdom of Dreamland, Groening (working with his longtime team of animators at Rough Draft Studios) is piping up about darker themes than he has on previous shows. “The Simpsons is a family sitcom, Futurama ?was a workplace comedy and Disenchantment is a show about three damaged people [voiced by Abbi Jacobson, Nat Faxon and Eric Andre] in a magical world trying to figure out who they are and where they are going,” he says. “The show takes some dark turns and there is some tragedy. If you’re sensitive, you might tear up at some point.” There is also some sexual innuendo, nudity and “pretty risque material,” Groening acknowledges. “But we even it out: It is only 50 percent people you would like to see naked,” he adds with a big laugh.

And while there may be some nods to other beloved works from the same genre (Monty Python and the Holy Grail and Game of Thrones), Groening stresses that his show will not be a string of parodies. “We wanted the world of Dreamland to resonate and be real. We found the best way to tell an arc was to plot it dramatically and add jokes.” Of the GoT reference that crops up early in the first episode, he adds, “We wanted to get it out of the way because people are going to be looking for it.” 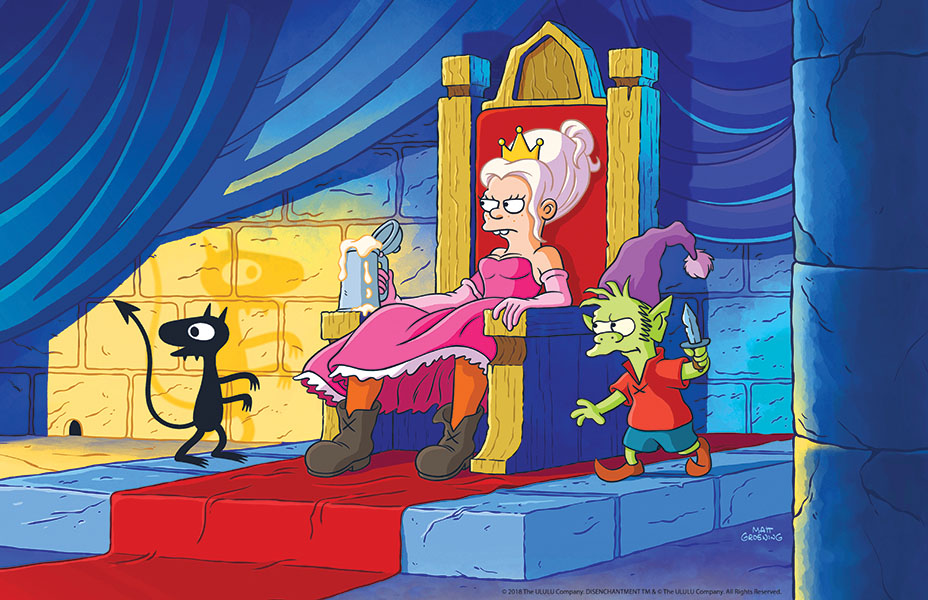 Disenchantment, which is Groening’s first new series since Futurama premiered nearly 20 years ?ago, is one of the higher-profile swings amid a huge push into adult animation for Netflix, with Amazon and Apple also snapping up similar projects. Groening has “always loved working for Fox,” he says, but it was time for some change. “And Netflix couldn’t have been more supportive. They basically said yes after a very quick pitch and have been completely supportive thereon — and that is unusual in the history of TV. There is usually a lot more worry and second-guessing as time goes on.” He notes that Futurama never got much love from Fox: “They so much didn’t like it, they scheduled the show for 7 p.m. on Sunday nights and ?then made the slogan of the network: ‘The fun begins at 8 p.m.’ So, I wasn’t able to just read between the lines, I was able to read the line.”

The workflow of a show on Netflix is also a welcome change, Groening notes. “We don’t have to backtrack and remind people where they are in the story. We don’t have to do a sitcom reset [for each episode] that we’re all used to.” And the animation guru is pleased with the relationship he has built with the streamer. “We are not doing [Disenchantment] completely in the dark. Netflix has certainly been paying attention and all the notes have been very supportive and ones we agree with. I don’t mind notes if they make sense. My experience with Fox on Futurama was the notes that were given were contradictory. We were not able to address the notes without annoying another note-giver.”

Groening, who lives in the L.A. area, keeps a lid on his personal life (he declines to confirm any details about his marital or family status). He concluded the nihilistic comic strip that launched his career, Life in Hell, in 2012 — but the Catcher in the Rye fan (note the book on the shelves in the portrait on the previous page, created for THR by Groening and Disenchantment production company Ululu) still has no use for phonies. “There are so many who say they hated Holden Caulfield. And I am like, ‘This person is exactly who Holden is talking about! He is talking about you!’ “

With a dozen primetime Emmy Awards to his credit, Groening is unassuming about his creations’ success. “You try to surround yourself with great writers and great animators and great actors and great musicians and see what you can come up with,” he says. “What makes a really successful show is when everyone is helping everyone else enjoy the experience.”

On Disenchantment, he’s particularly fond of Jacobson’s Princess Bean, “not a perfect princess,” he notes. “There are more consequences to her actions. And Abbi brings a feminist’s point of view to the words.” And if fans take issue with the princess’ drunken misadventures, they won’t be hearing from him about the show via Twitter or anywhere else online. “I have no internet presence whatsoever,” says Groening, “because I am too sensitive.”