Seven years later, the trio of founders hosted their annual gala at The Wiltern on Thursday night, raising more than $200,000 for Rosewood and other elementary schools in the L.A. Unified School District.

The seventh annual gala, hosted by Lynch and The Big Bang Theory’s Mayim Bialik, featured performances by Kate Nash, electronic act The Crystal Method and Moby, who was honored with the organization’s Sound and Vision Award for his activism work. There was also an auction featuring pieces of music memorabilia and artwork by Shepard Fairey, Moby and Sara Sandoval.

Moby told The Hollywood Reporter about his work with the late neurologist and author Oliver Sacks, who studied the effects of arts education on the brain. “We found that creative expression strengthens your immune system, decreases cortisol and norepinephrine and promotes neurogenesis, so it’s not only nice, it’s really good for people,” he said.

“It’s especially galling that in a place like Los Angeles, where the economy is solely fueled by creativity, that we don’t have arts education in school,” Moby said. LAUSD currently offers some arts programs in 72 of its comprehensive elementary schools, and data is not available for its charter and alternative schools.

So far, Adopt the Arts has provided instruments, classroom renovations and lesson plans to more than 30 elementary schools, including magnet schools, in the district. It also provided the salary for a full-time music teacher at Rosewood.

Berman, who acts as executive director of the organization, said that although she enjoys the glitz of the gala, her favorite part of the job is “watching the kids experience music in their lives and how it changes them. I go to the classroom and I see how much joy they are experiencing, and it’s very rewarding,” Berman said.

Many of the guests emphasized the impact that arts education had on their careers: Sorum credits a particular music teacher for his three-decade career. “My high school teacher came to me when I was about 16 and I was in the jazz band,” he told THR. “He really gave me that inspiration that I needed in my life.”

“I think if all kids have access to art, we’re going to be raising healthier adults,” echoed Nash, who performed a three-song set at the start of the evening.

Fairey, who performed a DJ set at the gala’s afterparty, also credited his success to arts teachers. “I was lucky enough to grow up with access to art classes both in public and private school and I am the person I am because of that,” Fairey told THR. “I can’t imagine not having had those opportunities.”

“Everyone here tonight, they’re all working for free,” Moby added. “It’s all for the love of activism, and I find that really inspiring.” 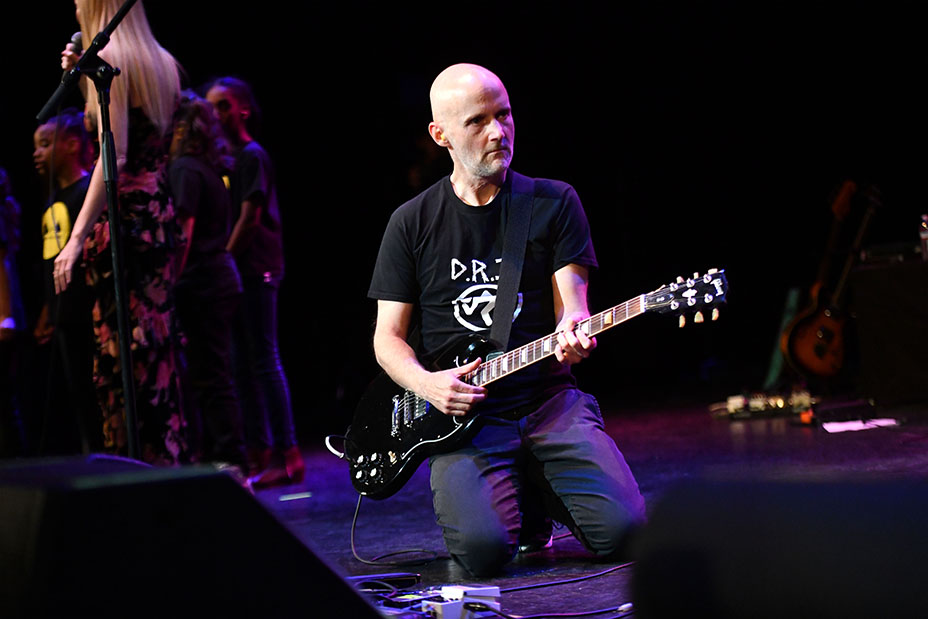