Continue to The Hollywood Reporter SKIP AD
You will be redirected back to your article in seconds
Skip to main content
November 10, 2021 10:16am

Matthew McConaughey clarified comments he made about his stance on mandatory vaccination against COVID-19 for children and confirmed that his own teenage son, Levi, has been vaccinated in an Instagram story posted late Wednesday.

“When asked my opinion on the subject of children and vaccination mandates I stated, ‘I couldn’t mandate it for kids just yet.’ What was not clear is that I was referring specifically to the 5-11 year old mandate,” the actor wrote in his story. “What is NOT true, and insinuated with the clickbait headlines since, is that I am against vaccinating children at all. This is false. In fact, our eldest 13-year-old son Levi is fully vaccinated for COVID-19.” 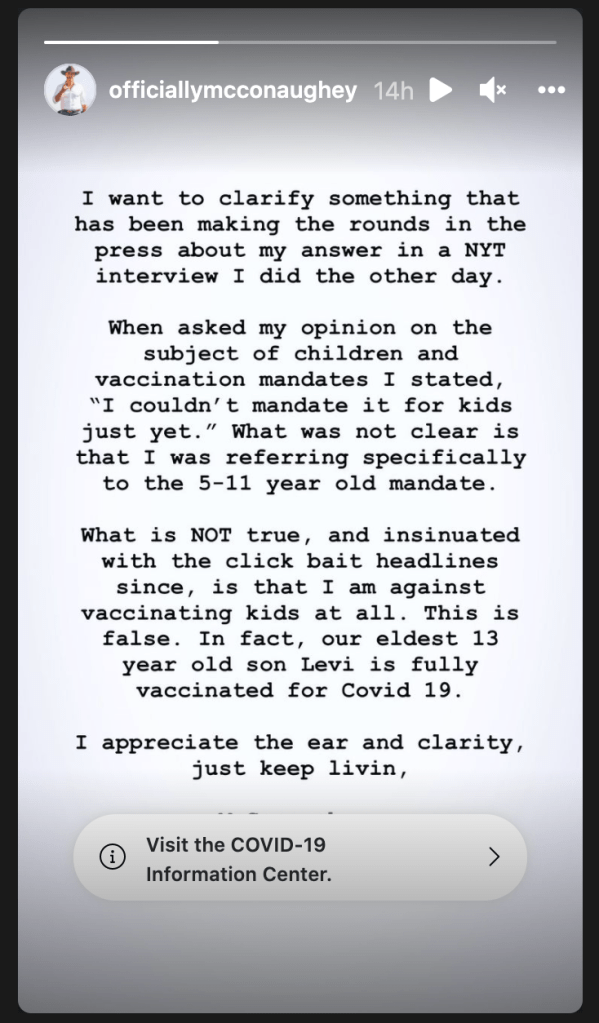 McConaughey, who is currently weighing a run for governor of Texas, shared his initial stance on a vaccine mandate for kids while appearing at The New York Times‘ DealBook summit on Tuesday. Speaking to Andrew Ross Sorkin, the Interstellar and Dallas Buyers Club actor confirmed that he and other adult members of his family, including his wife, Camila, are vaccinated, a choice he made due to having “a high-risk person in our household — my mother, who’s 90, and she’s immune-compromised.”

But when asked about mandatory vaccination for children, McConaughey, who pointed to the science “changing as we go,” said that he isn’t yet on the side of mandates for kids following the Food and Drug Administration’s recent emergency use authorization of the Pfizer-BioNTech COVID-19 vaccine for use in children 5 to 11.

“I couldn’t mandate having to vaccinate the younger kids. I still want to find out more information, but I couldn’t mandate for kids just yet, no,” he had explained, before saying he had no current plans to vaccinate his own children, without specifying if any of his children had already been vaccinated. McConaughey and Camila share three children, including Levi, 13, Livingston, 8, and Vida, 11.

The actor also reiterated his support on masking up during the pandemic, telling Sorkin, “It’s not the vaccine. It’s a mask. No harm proven, and we only prove that it can be healthy. It’s a small inconvenience for a possible long-term freedom.”

U.S. Surgeon General Dr. Vivek Murthy responded to the True Detective star while appearing on CNN’s OutFront, noting that “vaccines have shown in these trials for children 5 through 11 they are more [than] 90 percent effective in protecting our kids from symptomatic infection, and they are remarkably safe as well.”

Murthy added, “Many kids have died. Sadly, hundreds of children — thousands — have been hospitalized, and as a dad of a child who has been hospitalized several years ago for another illness, I would never wish upon any parent they have a child that ends up in the hospital.”

In explaining his stance on vaccine mandates for children, McConaughey noted that the Pfizer shots were “just” recently approved, that his household goes “slow on vaccination anyway, even before COVID” and that his family has “quarantined harder than any of our friends have, and still are, two years later.”

“Maybe I’m just trying to just keep it from my mom, OK?” he said of his decision to get the vaccine but not support mandates for children. “So we’ve been doing just a heavy amount of testing when and everywhere we can. We even take the ones with us out of the box, where we can do them in our house, everywhere we can, with anybody we come in contact with, try to do things outdoors.”

He did acknowledge that in terms of the measures he and his household take, he’s “in a position, though, where I can do that. And I understand that not everyone can do that.”

During the discussion, McConaughey also reiterated that he doesn’t support conspiracy theories around the vaccine, saying he wants to trust the science. “Do I think that there’s any kind of scam or conspiracy theory? Hell no, I don’t. No,” he said. “We all got to get off that narrative. There’s not a conspiracy theory on the vaccines,” he stated, while also dismissing the notion that vaccines are just being pushed by “Big Pharma” to make money.

The Oscar winner has been openly flirting for months with the prospect of entering what could be a pivotal race in 2022 to lead Texas as governor.

“I’m learning about politics,” he said in an October New York Times podcast interview, after sharing he’s been “measuring” a potential run. “Is that a place to make real change, or is it a place where, hey, right now, it’s a fixed game. You go in there — you just put on a bunch of Band-Aids in four years, and walk out, and they rip ‘em off when you’re gone?