One needn’t look far to find stories that detail how the United States is facing multiple pandemics at once, from COVID-19 to racial injustice. On Thursday night, L.A. Family Housing presented a virtual gala that brought into focus how those crises feed into the epidemic of homelessness across the city. One needn’t look too far to find those currently on the streets, either.

“Home Together” — a virtual program produced by creative tech firm PXL and hosted on a custom website, Facebook, Twitter, YouTube and LAFH.org — replaced the nonprofit’s usual in-person affair, one that had aimed to raise north of $2 million. Instead, a more modest goal of $250,000 was set noted the night’s emcee, comedian P.J. Byrne who kept the onscreen action moving during a program that featured politicians, celebrities, musical performances and touching tales from LAFH staff, volunteers and clients who have been brought in from the streets.

Mayor Eric Garcetti kicked off the one-hour program by welcoming the virtual audience and acknowledging the challenging climate. “This has been a season of great loss for so many,” he explained, adding that even before the COVID-19 pandemic hit hard, many Angelenos were already faced with losing their homes. “No matter what your status or station is, everything can change in a moment’s notice. For 36 years, L.A. Family Housing has been a beacon for souls in their darkest nights.”

While Byrne brought the jokes — his first quip came about his ensemble and the fact that he was wearing a tie in honor of both his mother and the mayor — he also got serious by explaining how the phrase of the pandemic, “safer at home,” is one that hits different for those experiencing homelessness. “How can our neighbors on the streets be safer at home when they don’t have a home?”

But they can be thanks to LAFH’s stunning 94 percent success rate, Byrne continued, before tossing the spotlight over to LAFH’s president and CEO Stephanie Klasky-Gamer. For her part, she, like Garcetti, gave a nod to the atmosphere across the city and the country while taking it a step further to acknowledge how homelessness disproportionately affects Black Angelenos. Though the community only accounts for roughly 8-9 percent of the population, they make up about a third of the city’s homeless population.

“The protests these past three weeks have given voice to a call for change,” she said. “We’re seeing massive shifts in thought and perspective.”

Klasky-Gamer mentioned how LAFH has answered a call for leadership to serve the current crisis by doubling down on efforts to bring people in off the street. She mentioned how the organization has been active in the Los Angeles County initiative known as Project Roomkey, which was designed to make use of empty hotels (temporarily closed amid the pandemic) to house vulnerable homeless individuals. LAFH is operating four hotels and has worked to facilitate shelter for 500 individuals in the effort.

While LAFH is doing its part, Project Roomkey has fallen under fire for working too slowly to house an original goal of 15,000 individuals. Per a recent Los Angeles Times report, as it enters a fourth month, only 3,601 rooms have been secured. Furthermore, homelessness is a crisis that’s only expected to grow due to the current recession caused by COVID-19 and the worst unemployment numbers the U.S. has ever reported.

As for LAFH, Klasky-Gamer reported that the organization is in construction on four new properties, and one of those is due to open in two weeks. “Housing is a human right,” she said. “This success is not ours alone, we need your help to move more people home tonight.”

Following her remarks, BMG’s Tim Reid was joined by LAFH board member Zeeda Daniele, and the former had the job of introducing the night’s first performer, the label’s Grammy-winning singer-songwriter India Arie, who, Reid said, “has given us songs and art to lift us up and give us hope and power and knowledge and confidence.” On that note, Arie — joined by three musicians and two backup singers, virtually anyway — performed her track “Strength, Courage & Wisdom.” 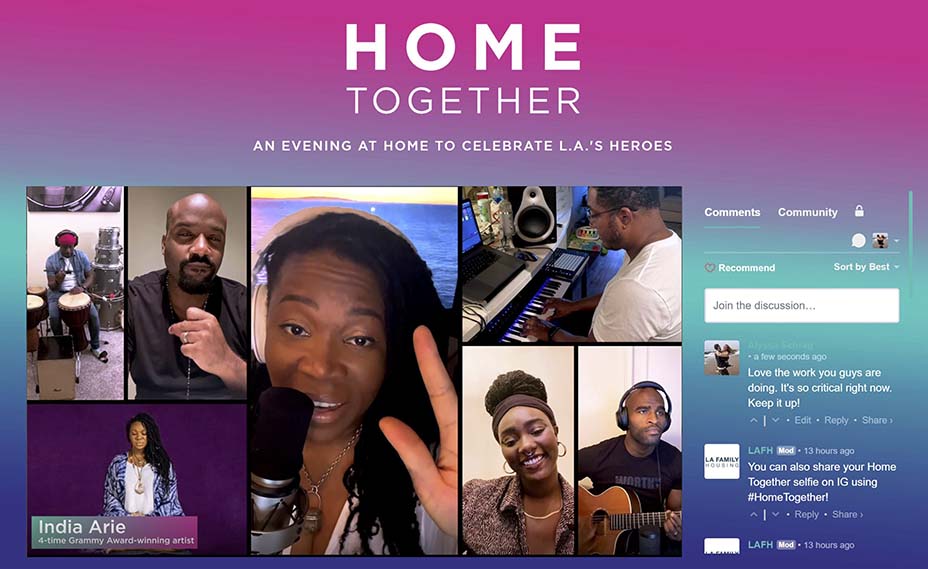 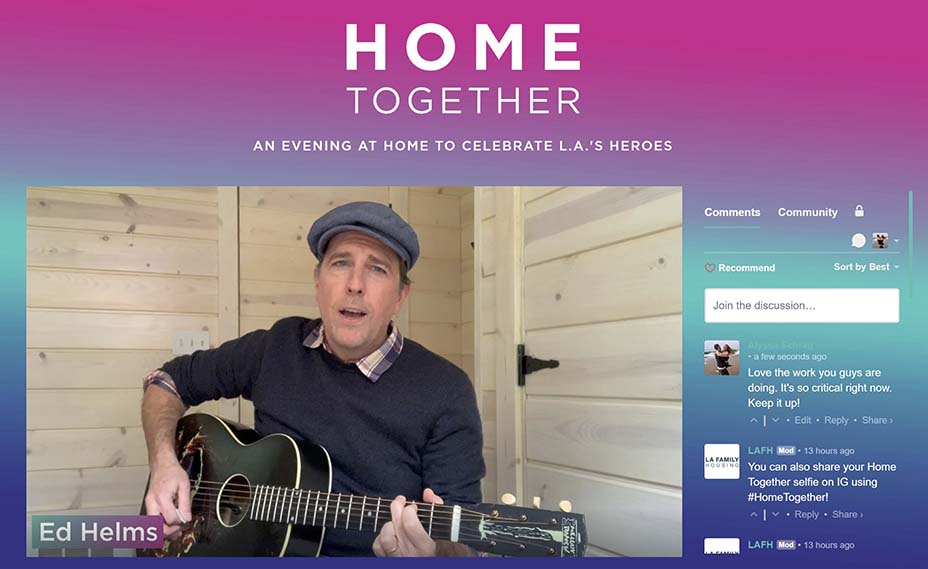 The LAFH gala would have placed a priority on food and entertainment and even at home, the organization found a way to work it into the night’s festivities. “Home Together” offered guests an opportunity to enhance their at-home experience with special menus from restaurant partners Angelini Osteria and Big Sugar Bakeshop, as well as a tasting flight of 8 California Coastal Wines from In Good Taste. A portion of the proceeds for each purchase went directly to LAFH. Postmates also got in on the action for the first 300 who ordered as part of the event, which was sponsored in part by The Smidt Foundation and City National Bank, the latter of which matched donations up to $100,000.

Finally, another highlight included event chair Blair Rich, president of worldwide marketing at Warner Bros. Pictures, who moderated a brief conversation with Supervisor Mark Ridley-Thomas. Rich deftly connected the crisis to her audience by asking Ridley-Thomas how those watching could help. “Our audience, they care,” she said. “They want to be engaged and are advocates. What are we supposed to do? What would you tell us?”

Ridley-Thomas said it’s a mistake for people to assume that homelessness is a problem that can be solved solely by the government or public sectors. He said nonprofits like LAFH are engaged in the work in a very deep way by “doing exceptional work” throughout Los Angeles, but it’s also up to individuals. Having contempt for the poor is not it, either. “We have to make this more personal. It can’t simply be an intellectual or political or policy discussion alone. At some level, it has to be personal for us.” 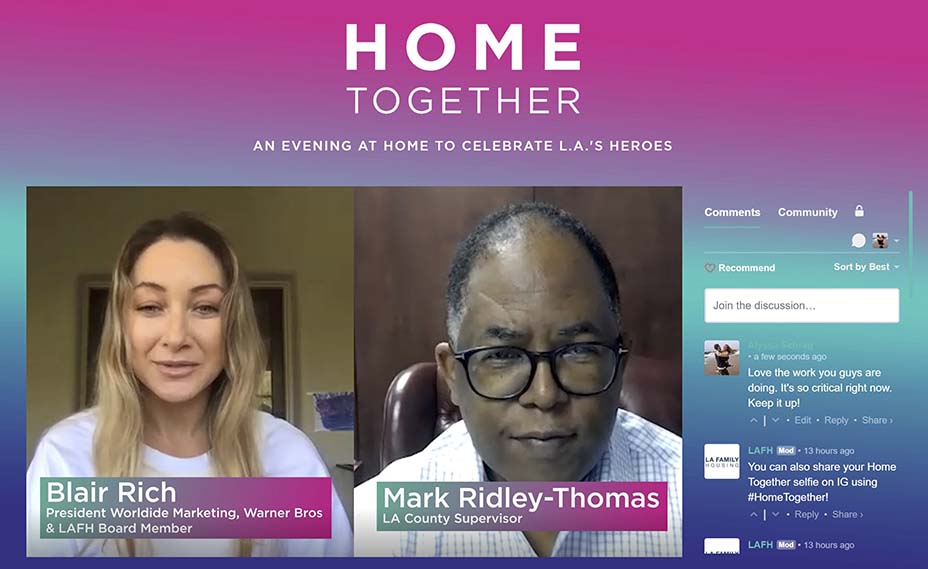