There’s a place on Broadway for the intimate chamber piece, but going small is generally not the preferred route for a musical comedy spun out of a popular teen movie. Writer Tina Fey and the creative team behind Mean Girls clearly understand this, as evidenced by their elevation of Regina George from imperious arbiter of high school hotness to full-blown arch villainess, a Medusa with a better hair care regimen. As played with a delectable streak of cruelty by the divine Taylor Louderman, Regina seems naturally to move in a slow-mo power strut, suffusing the air around her with an alluring pink glow no doubt hazardous to the environment.

“I’m the prettiest poison you’ve ever seen. I never weigh more than one-fifteen,” coos Regina in “Meet the Plastics,” one of a handful of menacing solos that riff knowingly on the darkly glittering drama of classic James Bond theme songs, along with “Someone Gets Hurt” and “Watch the World Burn.”

If the songs composed by Fey’s husband Jeff Richmond with lyrics by Nell Benjamin more often fall into workmanlike pastiche than inspired musical storytelling, too seldom developing robust melodic hooks, the score at least wins points for democratization. Every one of the principals gets a musical moment that tells us who they are, both the protective outer shell developed to survive the savage jungle of high school, and the tender human core, yearning to connect.

That plus the snappy comedy of Fey’s book makes this adaptation of the 2004 movie (which was directed by Mark Waters from a screenplay by Fey) a surprisingly enjoyable and genuinely funny sugar treat with a lot of heart. Enough of the film’s most memorable lines are retained to give fans what they want (“Stop trying to make ‘fetch’ happen!”). But it’s the new gags that freshen the formula, actually improving on the source material’s somewhat soft ending with a more satisfying payoff, while still pushing the broadside against bullying, bitchiness and unhealthy peer pressure. The updates to the era of smartphones and social media are clever and relevant. But the real key to the show’s success is its attention to the secondary characters, both in the writing and in the performances of an appealing cast.

It was a savvy move to centralize the two most defiant outsiders of North Shore High social stratification, artsy cynic Janis (Barrett Wilbert Weed) and her quick-witted gay sidekick Damien (Greg Henson). They open the show with “A Cautionary Tale,” an address to freshmen students in which they share the missteps of their friend Cady Heron (Erika Henningsen) as a lesson in the corrupting dangers of buying into popularity contests.

The Stars of 'Mean Girls': Where Are They Now?

That narrator function is used sparingly, but Janis and Damien are instrumental — as they were in the movie — in rescuing deer-in-the-headlights Cady on her first day at North Shore. Cady’s background as the home-schooled daughter of biologist researchers, growing up in Kenya, is deftly sketched by director Casey Nicholaw and video designers Finn Ross and Adam Young in the first of many whiz-bang transitions from the African savanna to the locker-lined school corridors during her first song, “It Roars.” That establishes the recurring motif of human/animal comparisons from the outset. But it’s the crash course in American teen subspecies, conducted by Damien and Janis — and illustrated by a versatile ensemble with fleet costume modifications — in “Where Do You Belong?” that kicks the show into high gear. (Especially loved the Woke Seniors.)

Of course that detailed ethnographic breakdown builds to the intro of the feared and worshipped “Plastics” — “shiny, fake and hard.” Regina is flanked by her handmaidens: insecure, desperate-to-please Gretchen (Ashley Park, a delight), who gets one of the show’s standout songs in the poignant “What’s Wrong With Me?”; and blissfully dim Karen (Kate Rockwell, hilarious), whose big number succinctly encapsulates her limited priorities in its title, “Sexy.” Karen’s walk alone is priceless. Regina, with the unerring instinct of a killer primate to spot a potential threat, zeroes in on pretty Cady as a plaything for her mind games. She invites her to sit at their table in the cafeteria, provided she adheres to the dress-code rules (“On Wednesdays we wear pink!”). 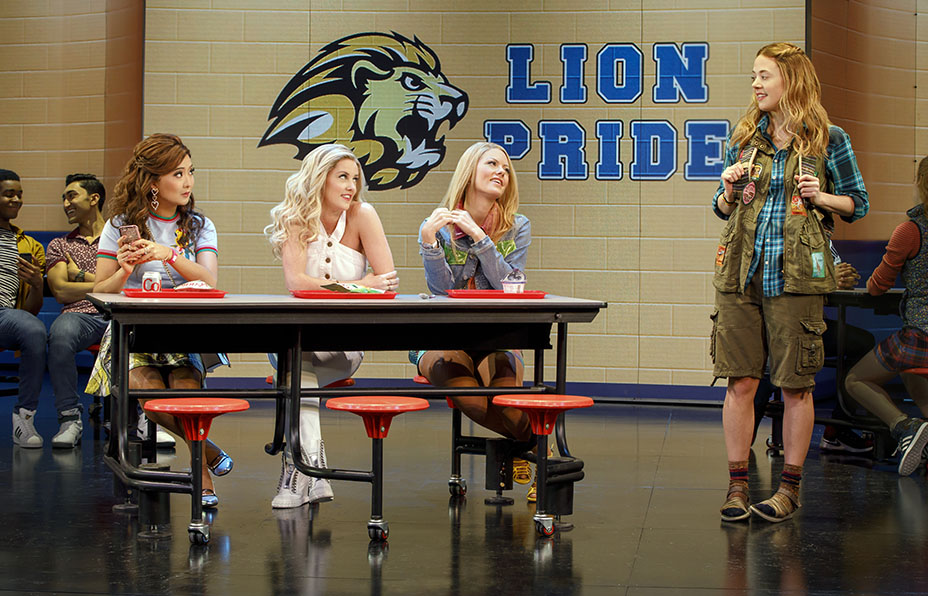 For the benefit of anyone who has somehow missed the movie during the past decade-plus of constant cable rotation, Janis convinces Cady to accept Regina’s invitation and report back with dirt. But things get complicated when Cady falls for Regina’s dreamboat ex, Aaron (Kyle Selig), in calculus class, and the queen bee snatches him back just because she can. Damien and Janis at first are down with the “Revenge Party” plan, but Cady proves so skilled at emulating Plastics behavior that she forgets who she is, dethroning Regina while becoming as shallow, disloyal and unfeeling as her nemesis. Life lessons await.

Some of those are delivered by Fey’s stand-in from the movie, sardonic math teacher Ms. Norbury, played here by Kerry Butler, acing triple-duty with distinctive takes also on Cady’s earnest mother and Regina’s self-described “cool mom,” the latter no less her daughter’s underling than Gretchen or Karen.

But the real showstopper in the advice department comes earlier with Damien’s “Stop,” a futile attempt to acquaint Cady with the concept of self-control that builds into an exhilarating tap-dance extravaganza. As is only fitting given the forward strides in LGBT acceptance since the movie was released, Damien is now louder, prouder and (Sasha) fiercer, and newcomer Henson is all kinds of fabulous in the role. His collection of diva T-shirts is a hoot, and his sassy ebullience is ideally matched with the deadpan perfection of Weed’s Janis. She’s at her best when she shows the hurt beneath her disdain, yet rejects meanness in the song “I’d Rather Be Me.”

Ironically, given that the musical has a more cartoonish quality amplified by the extensive use of video in the design, the key transformation plays more believably on stage. That’s also because fresh-faced Henningsen, with her big, bright voice, brings such assurance to Cady’s ricochets from guileless adventurer in a strange land to cool conqueror and back to humbled do-gooder, who is able to see the redeeming qualities in everyone. And Henningsen’s sweet chemistry with Selig lends spark to their scenes; Aaron’s own reawakening from Regina’s spell contributes to Cady’s growth as he tears down her misguided belief that “More Is Better.”

It helps enormously that Fey has such contagious affection for her characters, notable in the extra dimension given here to Gretchen and Karen in particular. There’s no spite in the show’s laughs at the expense of Karen’s intelligence; she seems quite happy with her focus on beauty over brains, but has the advantage over Gretchen in terms of self-esteem. (It’s only mildly on-the-nose when Karen sings lines like: “I’m actually a human being and not a prop.”) The liberation of Karen and Gretchen from Regina’s tyranny yields humor but also an emotional lift in “Fearless,” and their empowerment continues as they come to realize they can do just fine without a leader.

Meanwhile, Louderman softens Regina, but shrewdly retains some spiky edges even after her turnaround following a near-death experience. Her redemption is strictly within plausible boundaries for a girl who’s been a monster pretty much her entire life.

Her ditzy mother acknowledges as much in a lovely reprise of Gretchen’s song “What’s Wrong With Me?” in which Mrs. George sings of the rude awakening in store for Regina when she has kids of her own: “And then, baby, wait and see. You’ll be worshipped for years. And then she’ll turn three.” It’s moments like those — giving even the most vacuous-seeming character an interior life — that make the show so pleasurable. It’s no surprise after Fey’s years on 30 Rock and The Unbreakable Kimmy Schmidt that she can stitch sight gags, verbal jokes and throwaway laughs into situational comedy, but her humor works just as often in the service of character. There are touches of invigorating lunacy that recall the wackiest of her TV work — for instance a guffaw-inducing Transformers reference, or a handful of gleefully inappropriate historical figures fashioned into Halloween costumes, including “sexy Rosa Parks.”

While the show’s book outshines the score, the songs pack in their share of wit, both in Benjamin’s nimble lyrics (recalling her work on the Legally Blonde musical) and Richmond’s buoyant tunes, which borrow with a wink from a variety of styles. The occasional use of an African theme starting in Cady’s “It Roars” is a nice touch (with costumer Gregg Barnes getting in an amusing dig at Julie Taymor’s creations for The Lion King); the play on thumping house music in the title “Whose House Is This?” is cute; and Damien’s “Where Do You Belong?” has the air of a Sesame Street teaching-moment jingle. The finale, “I See Stars,” caps off the show on a touching note without drowning in treacle, and it’s easy to imagine a dreamy song like Cady’s “Stupid With Love” hitting the target demo of teen girls where they live.

In terms of physical design, Scott Pask’s set pieces work in seamless functionality with the sea of video (the instant materialization of an entire mall is quite something), and there are fun touches like the drop-down floral fixtures during the school’s Spring Fling prom. Kenneth Posner’s lights are a riot of candy colors, as they should be, heavy on the pinks and purples. Catching Regina at her most malevolent with the wash of underlighting from a Xerox machine was a stroke of genius.

Director-choreographer Nicholaw infuses the production with his customary playful energy, and his dance moves have an almost awkwardly explosive quality that seems organic to the teenage characters. Even the splashy ensemble numbers, two of which make memorable use of cafeteria trays, suggest a nervous burst of hormonally charged adolescence that makes Mean Girls sing.