A new California law requiring women on corporate boards could have a scattershot effect on entertainment companies: A few already are in compliance with the new mandates, others are not — and many of the largest are based elsewhere, beyond the reach of the new law.

The #MeToo-era legislation sponsored by State Sen. Hannah-Beth Jackson requires any public company headquartered in California to have at least one woman on its board of directors by the end of 2019. Two years later, the requirement gets tougher: three female directors if the board size is six or more; two for boards of five; and one for smaller boards. Violations result in fines of as much as $300,000 per year. Norway, France and Germany have similar laws.

“With numerous independent studies showing that corporations with women on their boards are more profitable, SB 826 is a giant step forward for women, our businesses and our economy,” said Sen. Jackson in a release issued after Gov. Jerry Brown signed the legislation Sept. 30. That economic justification raises some eyebrows. “This bill is about the use of government power to obtain social change,” said Akerman law’s Jeffrey S. Horton Thomas.

Already compliant are such California-based companies as Disney, whose board includes General Motors CEO Mary T. Barra, and Netflix, which boasts former U.S. National Security Adviser Susan Rice and former Disney-ABC Television president Anne Sweeney. Out of compliance: Apple, Alphabet, Live Nation (which has Fox TV Group chairman Dana Walden on its board), Lionsgate and Facebook, whose Sheryl Sandberg leans in on an otherwise all-male board. Other studio and network owners — like CBS, AT&T, Comcast and Sony — are headquartered in New York or elsewhere.

“The bill has already had positive impact on companies across the country by elevating the discussion regarding the importance and benefits of diversity in the boardroom,” said Annalisa Barrett, corporate governance professor at the University of San Diego School of Business. That diversity, she added, can translate into instructing the CEO to prioritize inclusivity in the workplace.

But there may be a legal challenge ahead. Many public companies are incorporated in Delaware, which guards its corporate law prerogatives. A legal principle called the internal affairs doctrine holds that matters involving corporate boards are subject to the laws of the state of incorporation, not where the headquarters are located.

The new California law appears to run afoul of that doctrine, says UCLA law professor and corporate governance expert witness Neil Wertlieb, who favors the bill. It also impairs shareholder rights, and its quotas may be impermissible reverse-discrimination. All of that might tee up a court case — or even conflicting rulings in Delaware and the Golden State. Meanwhile, others ask about racial representation.

Says Wertlieb, “The law is at least a start, and whether it will go further remains to be seen.” 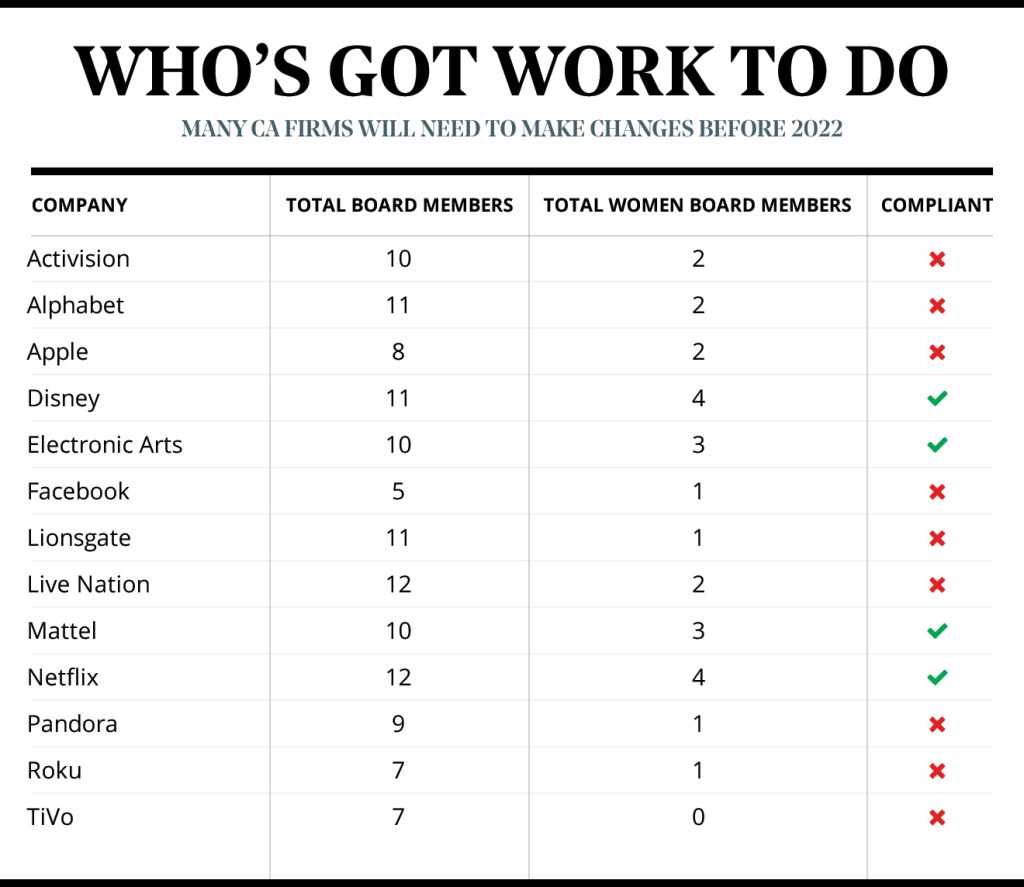