After Donald Trump refused to condemn white supremacists during the Sept. 29 presidential debate and issued what many interpreted as a call to arms to an extremist group, #EndTrumpsHate was trending. The reason? A political action committee with Hollywood ties and a knack for producing viral videos turned the president’s words into an anti-Trump ad.

The Meiselas brothers didn’t set out to start a Democratic super PAC, but after weeks of venting their frustrations over Trump’s handling of the COVID-19 pandemic in their iMessage group chat, they decided to stop screaming into the void and start taking action.

Ben, Brett and Jordan Meiselas launched MeidasTouch as a blog in March, but it quickly transformed into a viral video powerhouse. “I was feeling so helpless and I didn’t know how I could participate, especially while the coronavirus was unleashed on the country,” explains Brett. “It was clear to me that people were going to be losing their jobs, people were going to die. I was staring down the barrel of that, saying, ‘What the hell are we doing here?’ ”

Each of the brothers, originally from Long Island, brings a unique skill set. Brett is an Emmy-winning video editor who spent five years working on The Ellen DeGeneres Show; Ben is an entertainment and civil rights litigator whose clients include former NFL quarterback Colin Kaepernick; and Jordan is a marketing supervisor who’s balancing his advocacy with a full-time job, working out of a 400-square-foot apartment in  Brooklyn.

MeidasTouch has made more than 80 videos, amassed a following of about half a million users across Twitter, YouTube and TikTok and caught the attention of politically inclined Hollywood A-listers like Judd Apatow, Mark Ruffalo and Ken Jeong. The trio also has a special series on SiriusXM’s progressive politics  channel.

“The ultimate goal is to get Trump out,” says Brett. “It’s an existential crisis for our country to have this guy in office. We’ve also been very adamant about flipping the Senate blue.” 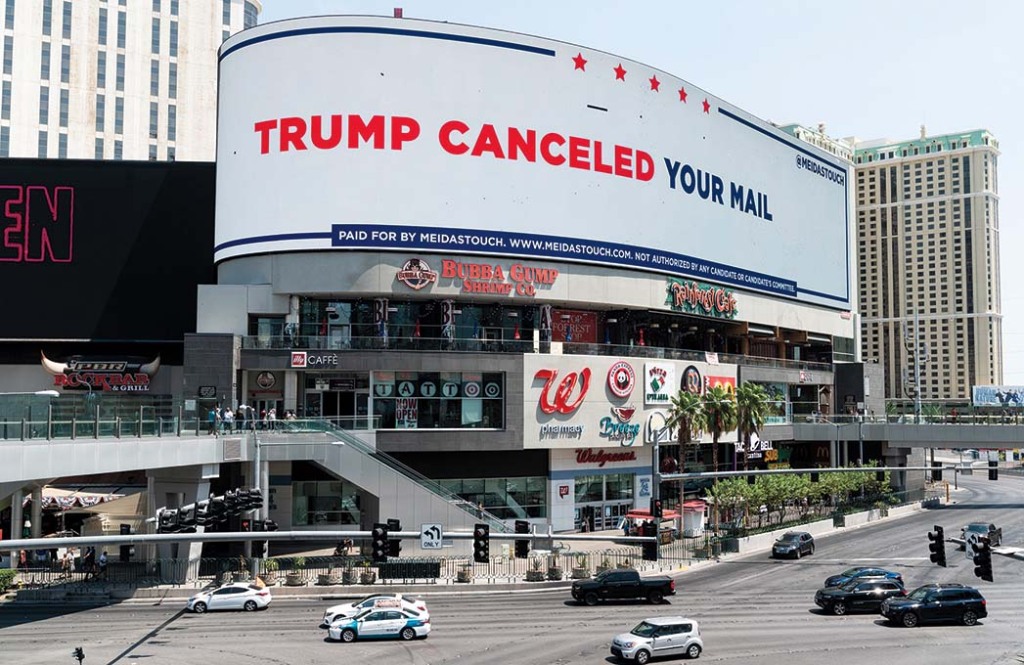 Their format, which edits news clips and speeches to craft a narrative, was born of necessity because they didn’t have any money to hire a narrator. It all started with Brett cutting a video of Ronald Reagan’s 1980 “Are You Better Off?” speech together with pandemic footage. It was a hit, and their style was born.

The brothers’ favorite ad is a two-minute “indictment of xenophobia” clip called “The Snake,” which has been viewed more than 6 million times since it was posted May  8. In addition to using Trump’s own words against him, they’ve made videos centered on GOP figures who are up for re-election, including Sen. Lindsey Graham and Sen. Susan Collins.

The budding PAC so far has raised more than $2  million, with an average donation of less than $30, which is being used to bring their ads from the internet to TV in swing states.

“The great thing about how we operate is we’re so nimble,” says Jordan.

On Sept. 27, when The New York Times published its blockbuster article based on Trump’s tax information, it didn’t take long for MeidasTouch to snatch up donaldtrumpisbroke.com. And within hours of the announcement that Trump has COVID-19, MeidasTouch posted a video highlighting his anti-mask statements. It racked up 2  million views on Twitter by noon the next day.

“We’re not afraid to play their game because we’re going to play it better, smarter and more strategically,” says Jordan. “Progressives punch back.”

Not everyone enjoys their work. When asked whether Trump’s legal team has reached out to them, Ben laughs before saying, “We’ve gotten some embarrassing cease-and-desist letters from people in that orbit.”

With early voting underway and less than a month until Election Day, the Meiselas siblings want to remind people they’re not powerless. “If you wake up and you’re depressed about Trump saying he doesn’t want a peaceful transfer of power or hardly anybody gets COVID or other ridiculous or deadly lies, stop complaining and do something about it,” says Ben. “If three brothers can do it, anybody can.”