Forget Gal Gadot and Jessica Chastain. The star the fashion world is angling to dress now is royal-to-be Meghan Markle, whose engagement to Prince Harry was announced Monday.

The Suits actress, 36, who hails from Los Angeles, is poised to be the biggest fashion icon in the world, bigger even than Kate Middleton, perhaps, since Markle has the added appeal of having had her own career pre-Harry, and a Hollywood sheen comparable with what Grace Kelly lent the monarchy of Monaco when she gave up her acting career to marry Prince Rainier III in 1956.

When it comes to clothing sales, the Meghan effect could rival the Kate effect, which could be a welcome boost to post-Brexit beleaguered British fashion designers, should she choose to wear them. For her official engagement press call, Markle, who has been living in Toronto filming Suits, chose a 799 CAD white coat by Canadian label LINE that sold out within hours of her wearing it. The sleek wrap style with oversize lapels evoked a similar less-is-more vibe to that favored by Middleton, but Markle will no doubt have a royal look all her own.

Looking at photos of her over the years, what is most remarkable is how unremarkable she is, and I don’t mean that as an insult. More so even than Middleton, she is the girl (or TV actress, as it were) next door, with a penchant for shorts suits (worn twice for appearances on Today), flirty sundresses, biker jackets and sensible footwear, all of which suggest that she is a modern woman who enjoys fashion but doesn’t live by it. She has many other interests, ranging from acting (though she announced Monday she will be giving that up) to humanitarian work.

And yet, since fashion is part of most any fairy tale, the world will be looking to the next princess for cues — and a fabulous wedding gown. Here’s what we know about her style and how it might translate into her royal role: 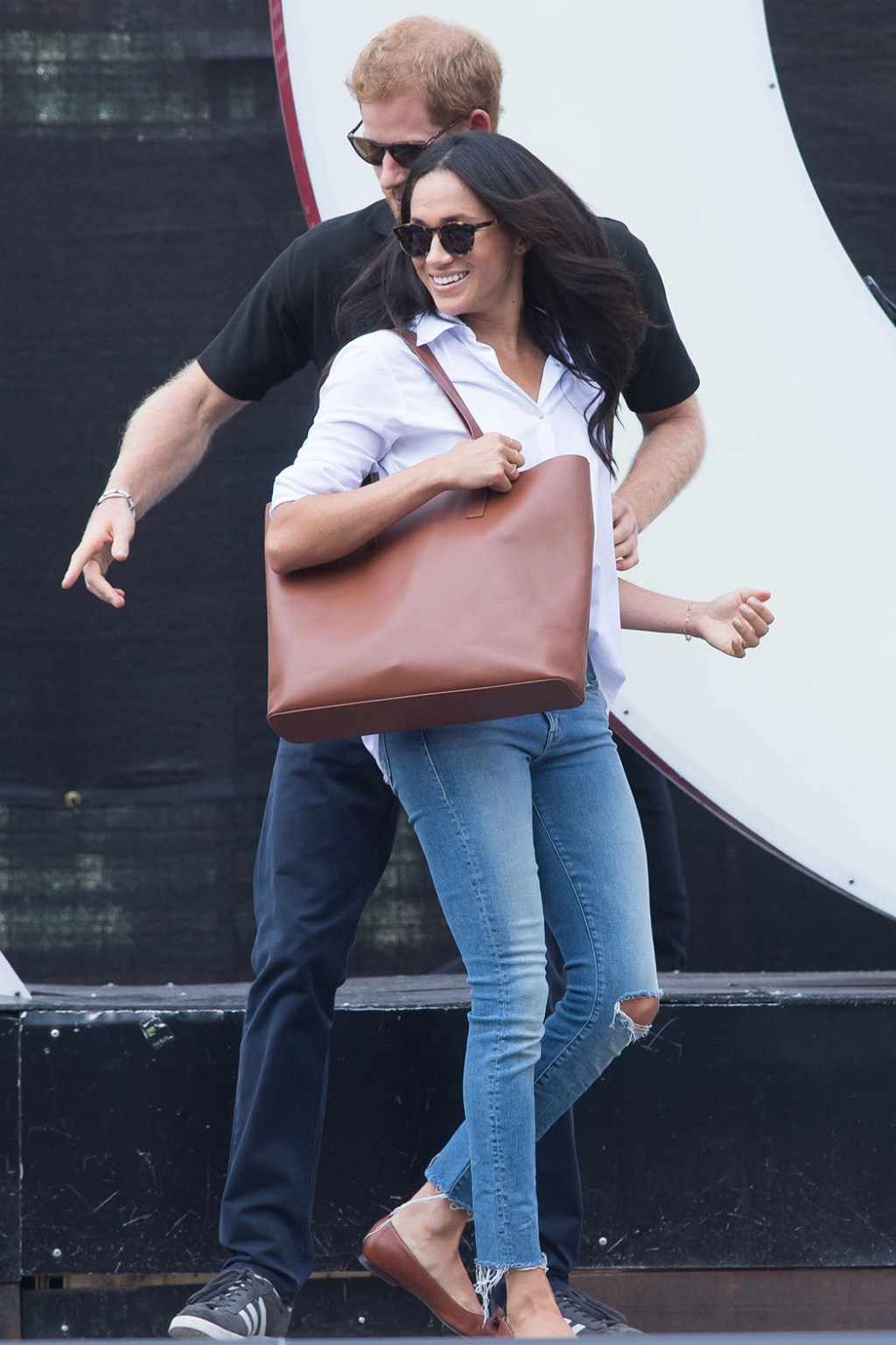 She likes to mix high and low

She has worn clothing by a smattering of high-end designers, and counts some of them as friends (Roland Mouret, Misha Nonoo). She favors short dresses (more sleek than fussy) and has international taste, wearing styles by British designers Erdem Moralioglu (no doubt on the short list to design her wedding dress) and Jenny Packham in recent months, as well as by Malaysian designer Han Chong of Self Portrait.

But Markle’s style seems to be casual at heart. At the Invictus Games in Toronto this summer, she raised some eyebrows by dressing down in ripped jeans by Mother with an oversize, white button-down shirt by Nonoo, which she paired with cognac leather flats by New York designer Sarah Flint and a tote by the online fashion brand dedicated to supply chain transparency, Everlane.

Since first appearing on Suits in 2011, Markle has been a celebrity guest on the fashion circuit, hobnobbing with designers at a Prada party and Marc Jacobs Fragrance launch, and even attending New York Fashion Week in 2014, where she took in the Herve Leger show.

One of her best pals is a stylist

Markle’s best friend is Jessica Mulroney, who is married to Ben Mulroney, son of former Canadian Prime Minister Brian Mulroney, and a stylist to Sophie Gregoire Trudeau, wife of current Canadian PM Justin Trudeau. Although Mulroney has said she doesn’t dress Markle, the two have vacationed together, taking a girls’ trip to Italy in 2016, and have a similar casual-cool style and appreciation for Canadian fashion designers. It’s a safe bet Mulroney will be involved in some way in the wedding planning, or at least be a (well-dressed) bridesmaid.

So excited to announce the exclusive fall collection I designed for @Reitmans!! More details by clicking link in my bio #MMxReitmans #fashion

She had her own clothing line

Well, she had a collaboration, really — with Canadian retailer Reitmans in October 2016. The collection of four signature, staple dresses was affordable, with styles less than $100. She modeled for the promo shots.

She’s not a big jewelry person (except for friendship bracelets)

Though she’s sure to have access to some of the most precious jewels in the world once she becomes part of the royal family (sister-in-law Middleton has worn Princess Diana’s Lover’s Knot Tiara, sapphire drop earrings and pearl bracelet on several occasions), Markle will have to learn how to incorporate the stunners into her wardrobe. (Would that we all had such problems! And she’s got a good start with that engagement ring.) Until now, she’s taken a less-is-more approach to accessorizing, typically eschewing necklaces and going with understated earrings and friendship bracelets.

Although Markle used to run her own lifestyle website, The Tig, she signed off in April as her relationship began to heat up with Prince Harry. Her farewell to The Tig was her last Instagram, too, and with it she said goodbye to posting photos tagging her Jimmy Choo shoes, Paige jeans and product previews with makeup guru Bobbi Brown. Now, we read about her every fashion whim in news headlines around the world!