Much like Hollywood actresses making the rounds for awards season (roughly 20 major public appearances for an Oscar nominee in a mere 3.5 months), being FLOTUS, means countless state dinners, charity engagements and trips to be chicly attired for. First Lady Melania Trump has already stepped out in a series of designer looks for her first 56 days in the role, from Ralph Lauren to custom Herve Pierre and most recently a black beaded $9,590 Michael Kors suit for Donald Trump’s first joint address to Congress. However, unlike an A-list actress, Trump is reportedly footing the bill.

Top Designers, Hollywood Stylists Say "No Thanks" to Dressing Melania Trump for Inauguration

“Why do rich people need free clothes? Melania should buy her clothes,” says veteran red carpet-stylist Phillip Bloch, who dressed Tiffany Trump for inauguration weekend. Kors released a statement about Trump’s congressional look, unofficially confirming that the First Lady purchased her ensemble: “Mrs. Trump has been a longtime client at our New York boutique. She has a keen understanding of what works best for her and her lifestyle. My embroidered black suit reflects the streamlined glamour that she is known for.”

With a number of designers like Tom Ford, Sophie Theallet and Marc Jacobs publicly acknowledging post-election that they won’t be dressing the current First Lady — and a noted drop in designer press releases going out (a norm during Michelle O’s FLOTUS reign) — there’s reason to wonder whether or not Mrs. Trump is buying by choice or if it’s because she has less support from the fashion community and fewer covetable options than her predecessors. 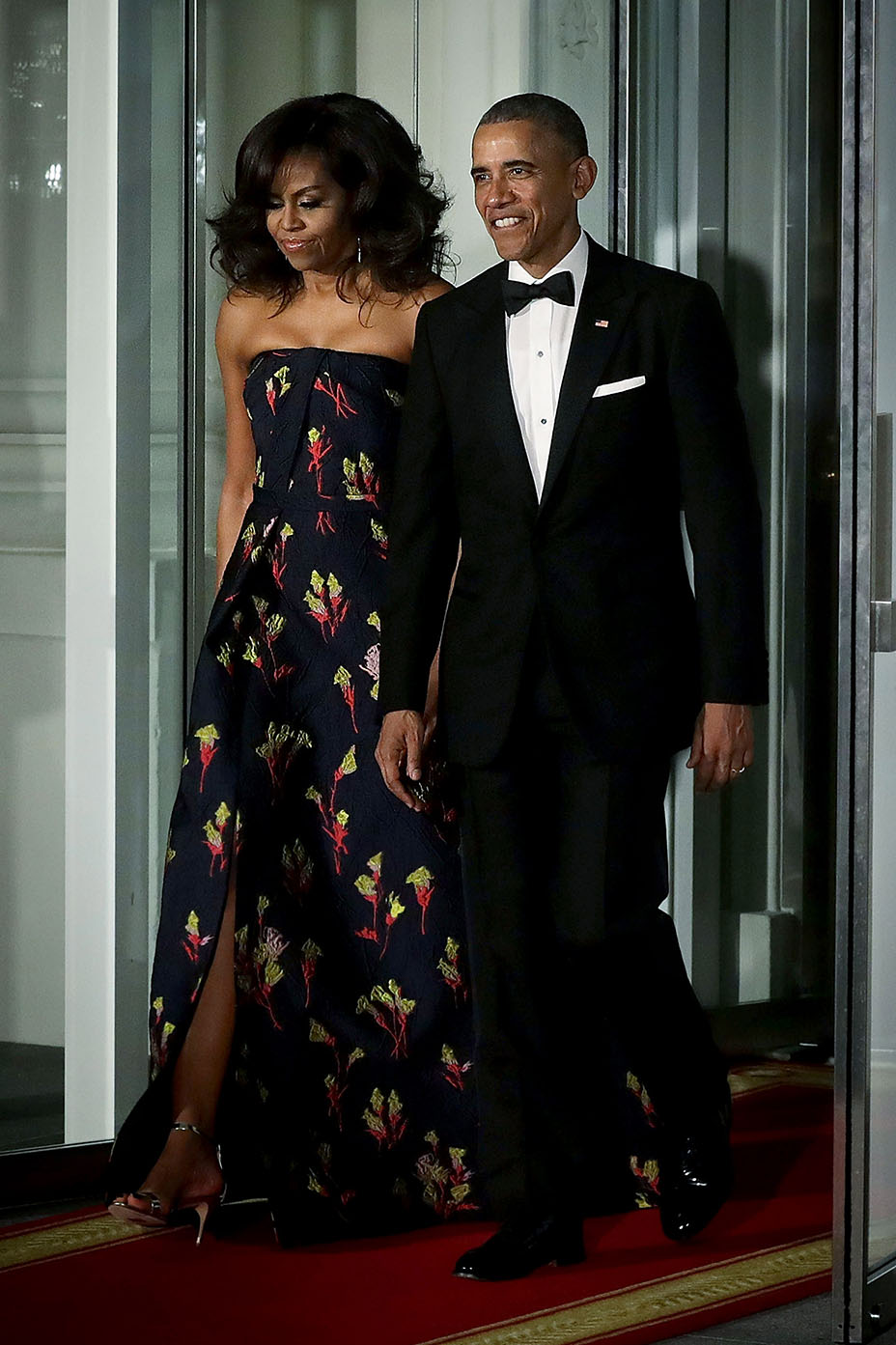 Bloch says no: “Melania is buying, but she does not have limited options — she is married to a rich man and can buy whatever she wants!” The bi-coastal stylist, who served as the creative style director for Donald Trump’s Miss Universe Pageant, praises Mrs. Trump’s choices thus far, “She wears clothes well and has a great style, I rarely see her make a misstep.”

The president’s better half is technically not supposed to accept designer freebies, nor does the position come with a clothing allowance. And no, the taxpayers don’t foot the bill either. The first family is expected to pay for clothing out of pocket though it is assumed special discounts are offered; dressing the first lady is not only an honor for most brands, it often results in a sales boost, as evidenced by Ralph Lauren’s stock bump (from $88.19 to $90.13 per share) right after Trump wore the designer’s sky-blue ensemble on Inauguration Day.

Joanna Rosholm, press secretary to former first lady Obama (who was known for her love of both high-end fashion and contemporary brands like J. Crew) said that Obama did not borrow clothing during her 8 years in the White House. Rosholm explained in 2014: “Mrs. Obama pays for her clothing. For official events of public or historic significance, such as a state visit, the first lady’s clothes may be given as a gift by a designer and accepted on behalf of the U.S. government. They are then stored by the National Archives.”

Laura Bush also paid for all her clothes, including her two inaugural ball gowns: a red crystal-embroidered gown by Texan designer Michael Faircloth and a silver and blue Oscar de la Renta. In her memoir Bush noted that she was “amazed by the sheer number of designer clothes I was expected to purchase” during her time as First Lady.

For her part, Kate Middleton follows a similar protocol, royals do not accept designer gifts. Middleton’s official public appearances wardrobe funds — an estimated $80,000 for her eight-day official Canadian tour in September of 2016 — come out of Prince Charles’s “Household” budget. Designer Katherine Hooker reaffirmed the idea that the Duchess of Cambridge buys not borrows by telling the Huffington Post, “[Kate] doesn’t take free clothes, and I’ve heard that from other people who sent her things. She always comes to the shop, which is nice.”

Adds Bloch: “As much as I loved that Michelle [Obama] mixed high and low and Kate [Middleton] does it too, Melania just isn’t that girl. She is going to wear that $9,000 sequin outfit to Congress. I admire her for buying clothes and I think Hollywood can take a note.” 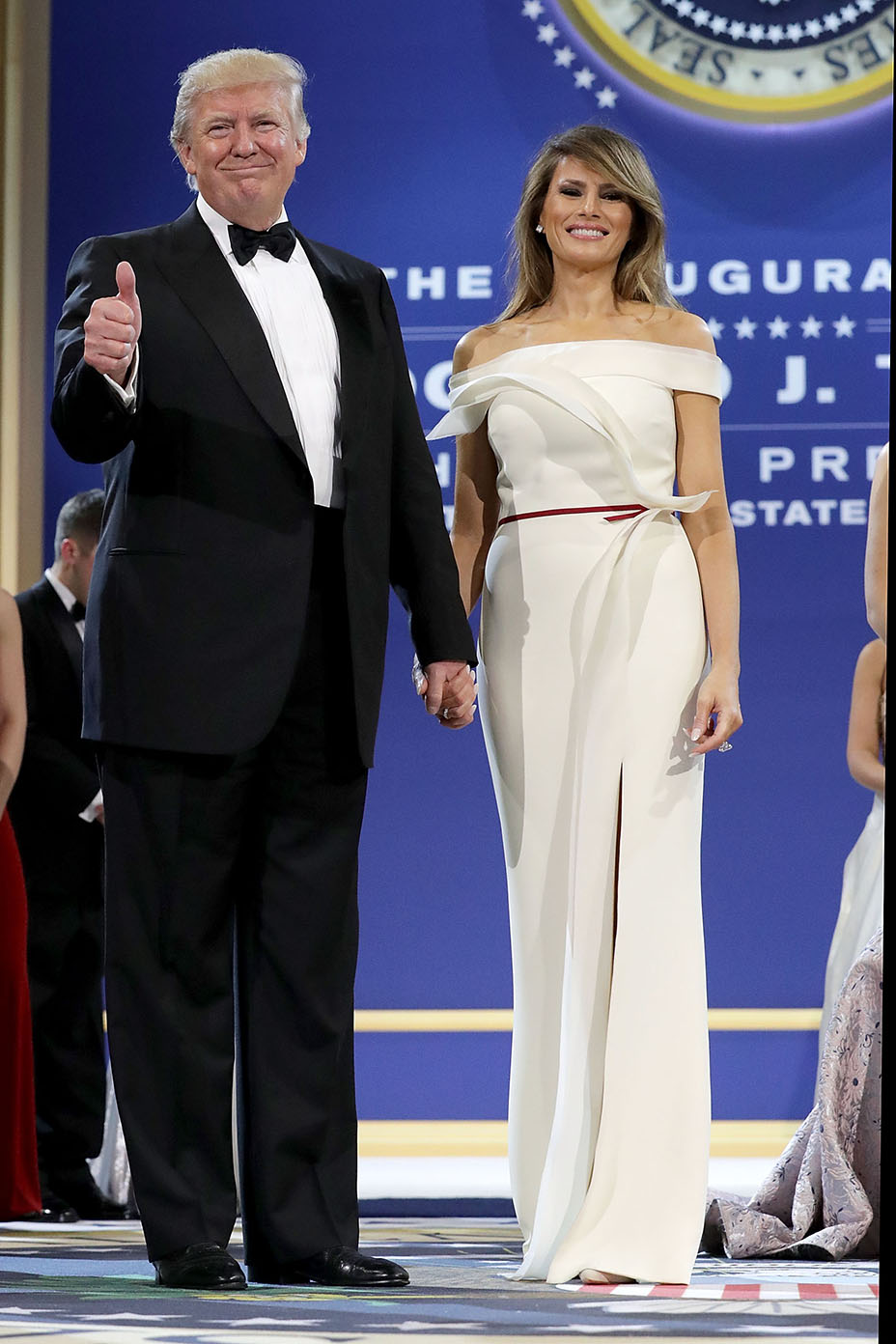