When I saw the news yesterday that first lady Melania Trump had committed yet another fashion fail, wearing a jacket that read “I Really Don’t Care, Do U?” to embark on a trip to an immigrant children’s detention center on the Texas border, I was bewildered by a couple of things.

Number one, how could she be so callous (or stupid) to wear that sentiment on her back on what was being billed as a humanitarian trip? Her spokeswoman tried to blame the media (big surprise), hoping we would not focus on it. “It’s a jacket,” she insisted. “There was no hidden message.”

But clearly there was, because no less than President Donald Trump himself felt the need to weigh in later in the day, again putting the blame on his favorite target. “‘I REALLY DON’T CARE, DO U?’ written on the back of Melania’s jacket, refers to the Fake News Media. Melania has learned how dishonest they are, and she truly no longer cares!” he wrote in a tweet. 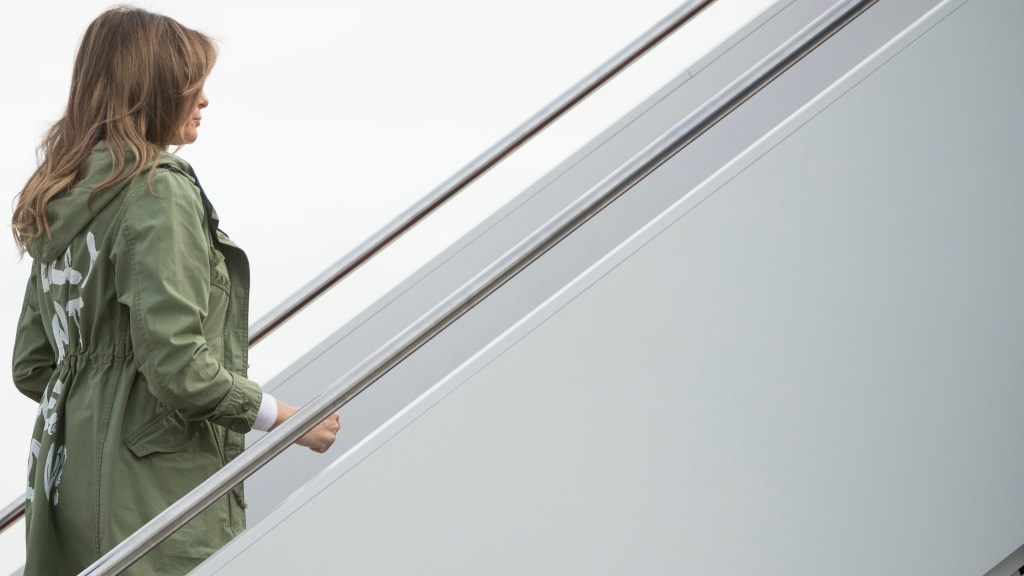 After the initial shock, the other thing that bewildered me is that this first lady wears Zara. This is the same woman who wore a $51,000 Dolce & Gabbana 3D floral coat on a trip to Sicily in 2017, a garment worth more than the median income of many Americans.

What the hell is she doing with a coat from fast fashion retailer Zara that had to have cost under $100?

While former first lady Michelle Obama’s approach to fashion in the White House was high-low (she did more for sales of cardigans and kitten heels at J. Crew than anyone, and the retailer hasn’t been the same since), Trump’s approach has been decidedly ostentatious.

She has flouted the traditions of first lady dressing from the get-go, eschewing the custom of wearing and supporting American designers (and her husband’s own America First policy), in favor of wearing European luxury names like Dolce & Gabbana, Fendi, Dior, Valentino and Alexander McQueen on most official occasions.

And time and time again, she has been skewered for style mistakes — taking off from the White House to tour a Houston flood zone after Hurricane Harvey while wearing her treasured Manolo Blahnik stiletto heels (a gaffe that earned her the nickname “Disaster Barbie”), and donning a Gucci pussy bow blouse to a presidential debate in the wake of the Billy Bush tape reveal that had Trump uttering the now-famous line, “Grab ‘em by the pussy.”

But why Zara now, and why spell out, “I Really Don’t Care, Do U”? The message had to be calculated, because there is zero doubt she had dozens of other coats she could have reached for on Thursday morning to set out on her trip. Perhaps she was speaking to the media, like President Trump said, or perhaps she was speaking to her husband, the ultimate f-you. But whatever the reason, she should have thought twice, because now she’s alienated everyone. And you know what? Whomever she was speaking to, or whatever she was trying to say, this trip wasn’t about her. But the jacket ensured it was.

What thefirst lady did do is create yet another political rallying call for fashion. The internet memes came fast and furious on Thursday afternoon, with Nevada congresswoman Dina Titus posting my favorite response.

Hey #FLOTUS, try this on for size. #WhoWoreItBest #ICare pic.twitter.com/q3TwjSQGmR

And by Friday morning, fashion brands were jumping on board. Wildfang released its own $98 jacket to answer the first lady’s question, with 100 percent of proceeds going directly to RAICES Texas (Refugee and Immigrant Center for Education and Legal Services). The jackets won’t ship for three weeks, but the proceeds will head directly to the center right away.

I bet Zara, which famously can turn around a design from concept to store in just a week’s time (thanks to some questionable labor practices), wishes it had been been quicker on the draw.