Yes, the ladies’ foil- and crystal-bedecked eyes were grand, but the real head-turner of this year’s Met Gala was Ezra Miller, who sported multiple eyes painted on his face, red lips and a coiffed bob. And he wasn’t the only lad employing a glam squad for Monday night’s gala. Likewise, Billy Porter, Marc Jacobs, Darren Criss, Jordan Roth, Harry Styles and Hamish Bowles all took their pink carpet game to the next level. 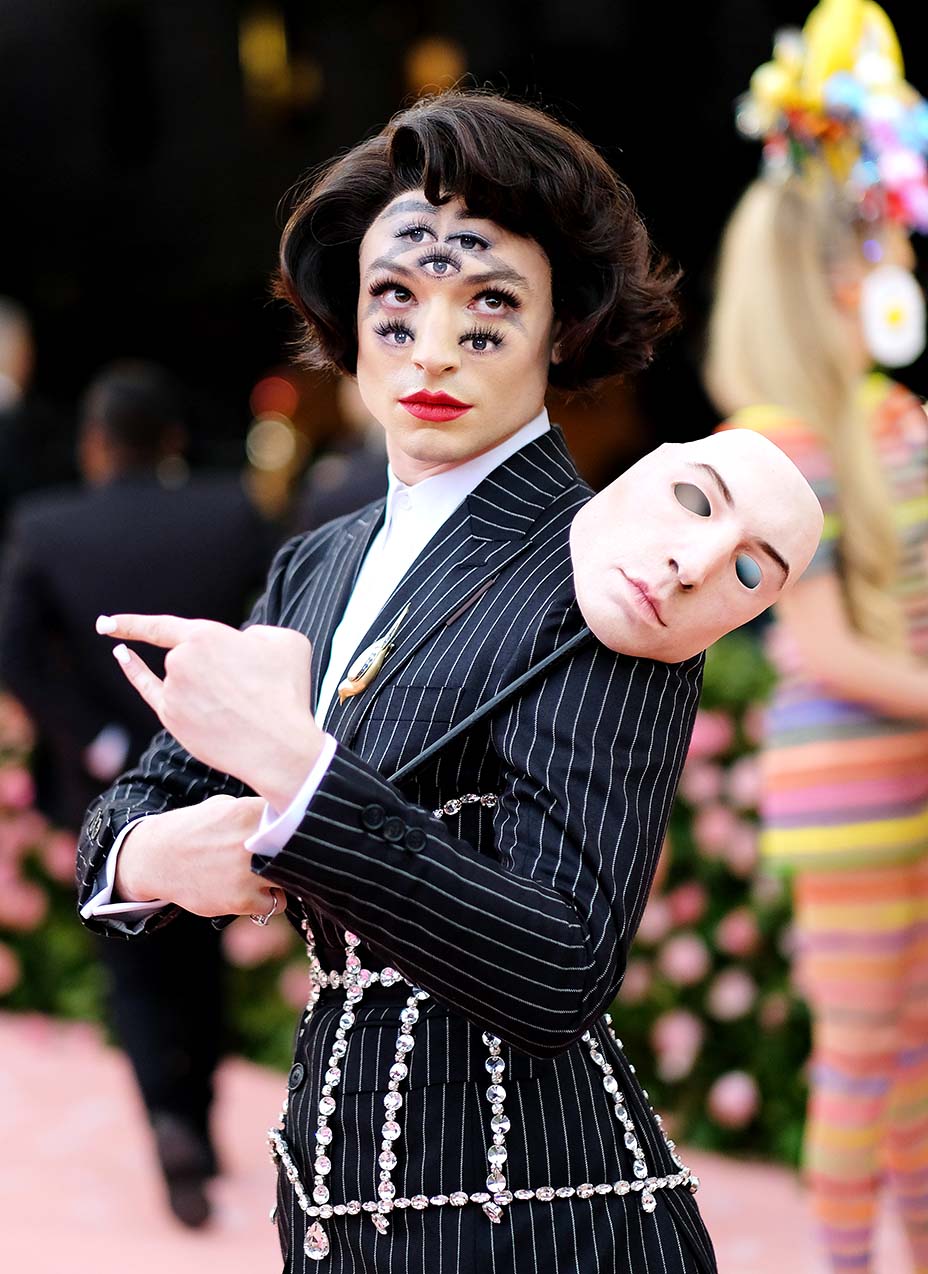 “The idea of painting multiple eyes came from Ezra’s vision of representing the many layers and versions there are to everyone,” makeup artist Mimi Choi tells The Hollywood Reporter of the “impactful” look she created on the actor known for playing The Flash. She used M.A.C Ruby Woo lipstick ($19.50, at maccosmetics.com) “because red is a powerful color that provided great contrast to Ezra’s complexion and black and white attire.” Taking cues from the “classic English tailoring and cape” of his Burberry outfit, hairstylist Sami Knight thought of “a modern dandy” for wig inspiration. He calls it “a style that could be considered femme for a boy, yet butch for a girl — something large enough to be noted, yet not so large that it’s distracting.” And the final androgynous element was the manicure, courtesy of pro Naomi Yasuda, who created a “flare shape” painted with “a white color because it looks clean and simple yet stands out the most.” 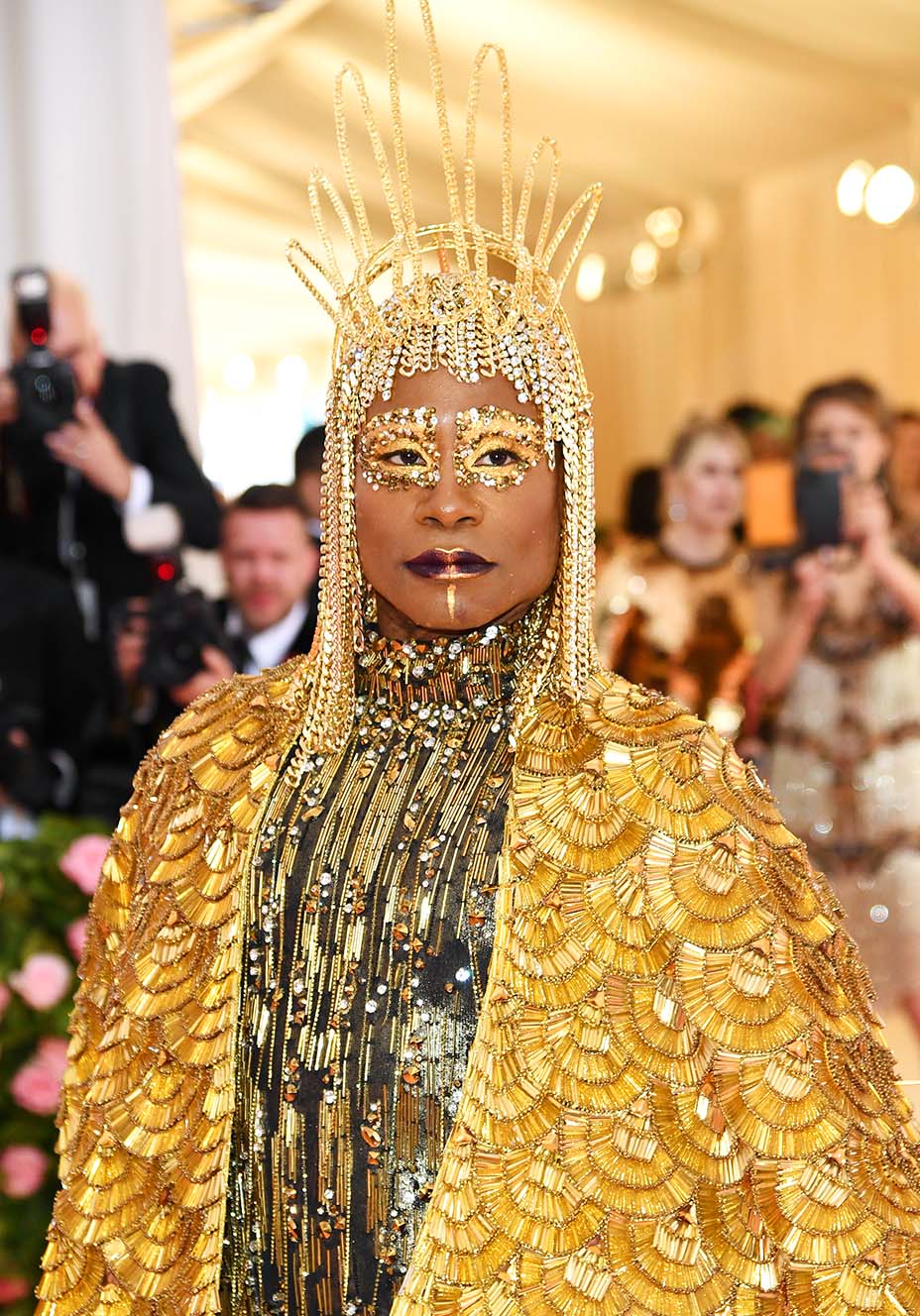 There’s no denying that Porter knows how to make an entrance. To complement his golden ensemble and head dress — all by The Blonds — makeup artist La Sonya Gunter turned to Pat McGrath Labs for the eyeshadow in Gold Standard ($25, at patmcgrath.com), which was also used on the lips over Deep Void lipstick ($38, at patmcgrath.com). To lend a golden flush to skin, she used Skin Fetish Highlighter + Balm Duo in Golden and Bronze ($48, at patmcgrath.com). 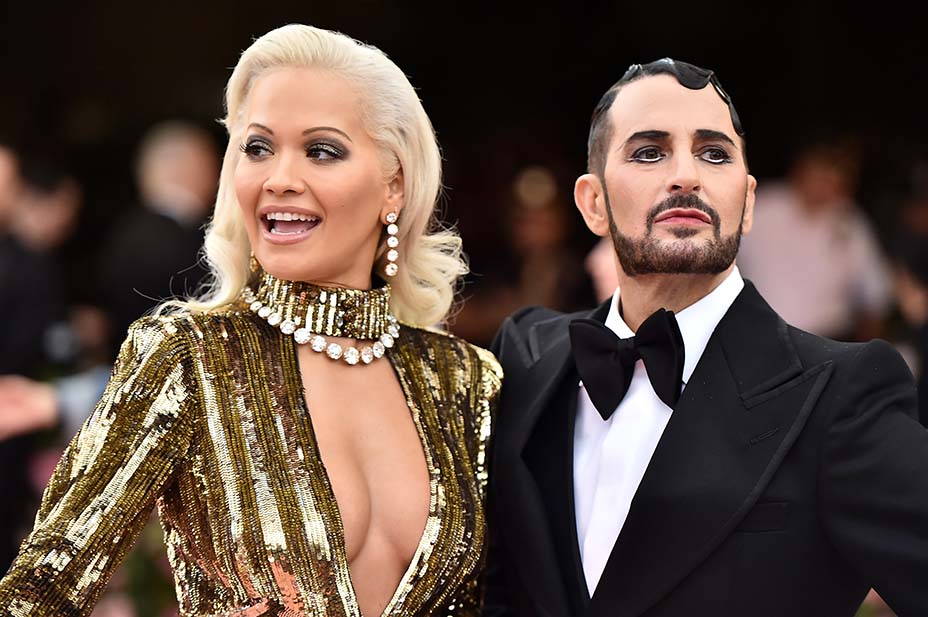 With heavily lined eyes (black and white), mascara and hair styled in finger waves, the designer melded feminine elements with his masculine facial hair. Jacobs embodied “the true expression of the meaning of camp, by going opposite of the norm,” says Eric Williams, responsible for Jacobs’ hair. Phuong Tran — a.k.a. the longtime assistant to Sarah Tanno, a.k.a. Lady Gaga’s makeup artist — was tasked with the full face of makeup. And Jacobs enlisted his longtime manicurist, Jin Soon Choi, for nails. “He always knows what he wants so I work with him to bring his vision to light,” which included “red nails with nail tips, but done with a natural look.” She “extended his nails with a round shape” and painted them with Marc Jacobs Beauty nail polishes in Lola (toes) and Jezebel (fingers). “Marc had references for the ideas he wanted,” says Williams, adding that “he loved” the final look. 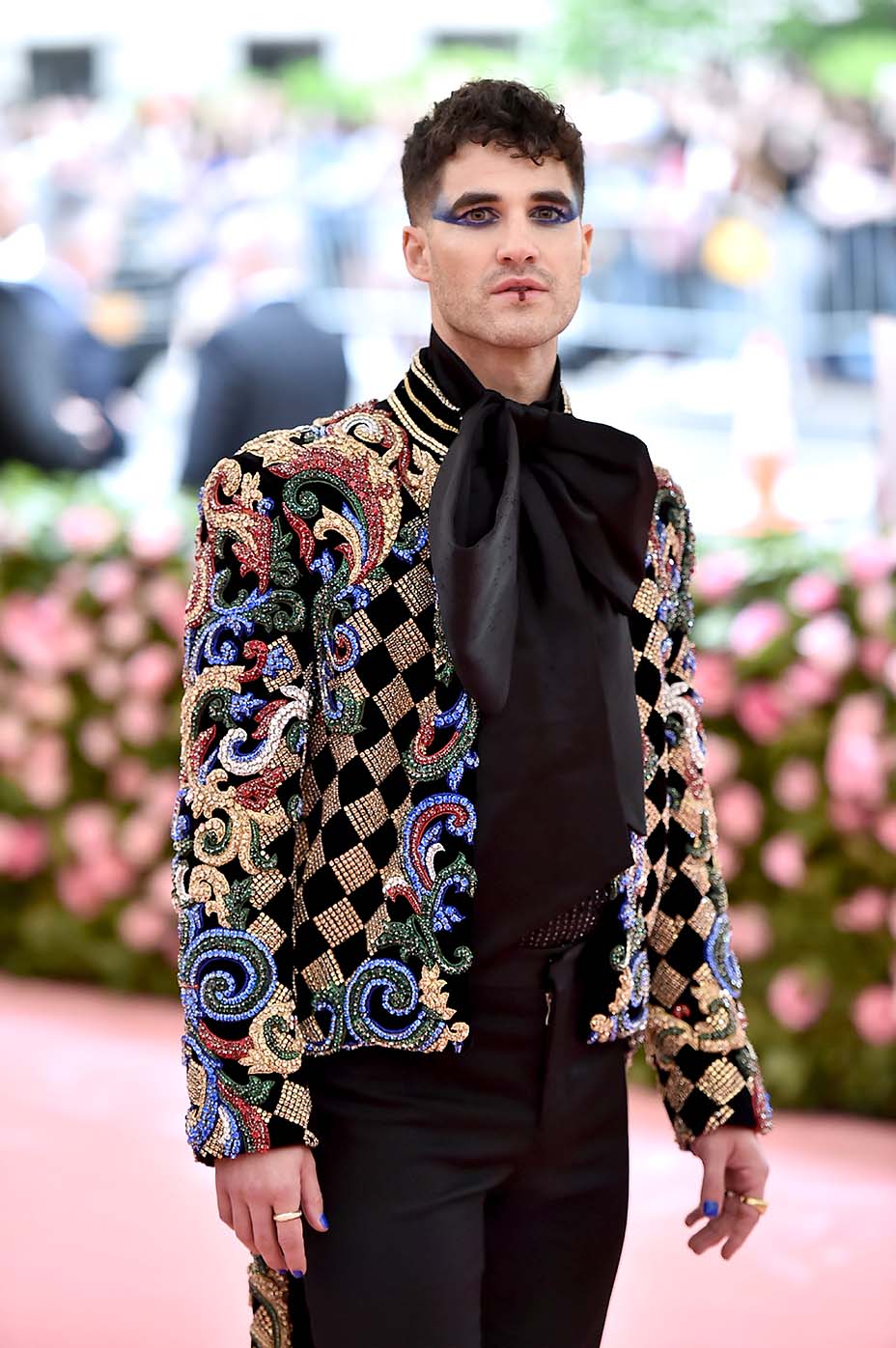 Continuing in his red carpet envelope-pushing was Balmain-bedecked Criss wearing cobalt eyeliner and a strip of crimson on the lip, all courtesy of makeup pro Jessica Ortiz. Key product? Shiseido Kajal InkArtist liner, which she used in Gunjo Blue for the eyes and Azuki Red for the lip strip ($25, at shiseido.com). Criss enlisted New York-based Julien Howard for hair, kept simple with emphasized texture at the top. The last step in prep was for Alex Jachno to paint Criss’ short rounded nails using blue Orly It’s Brittney Beach ($9.50, at orlybeauty.com). 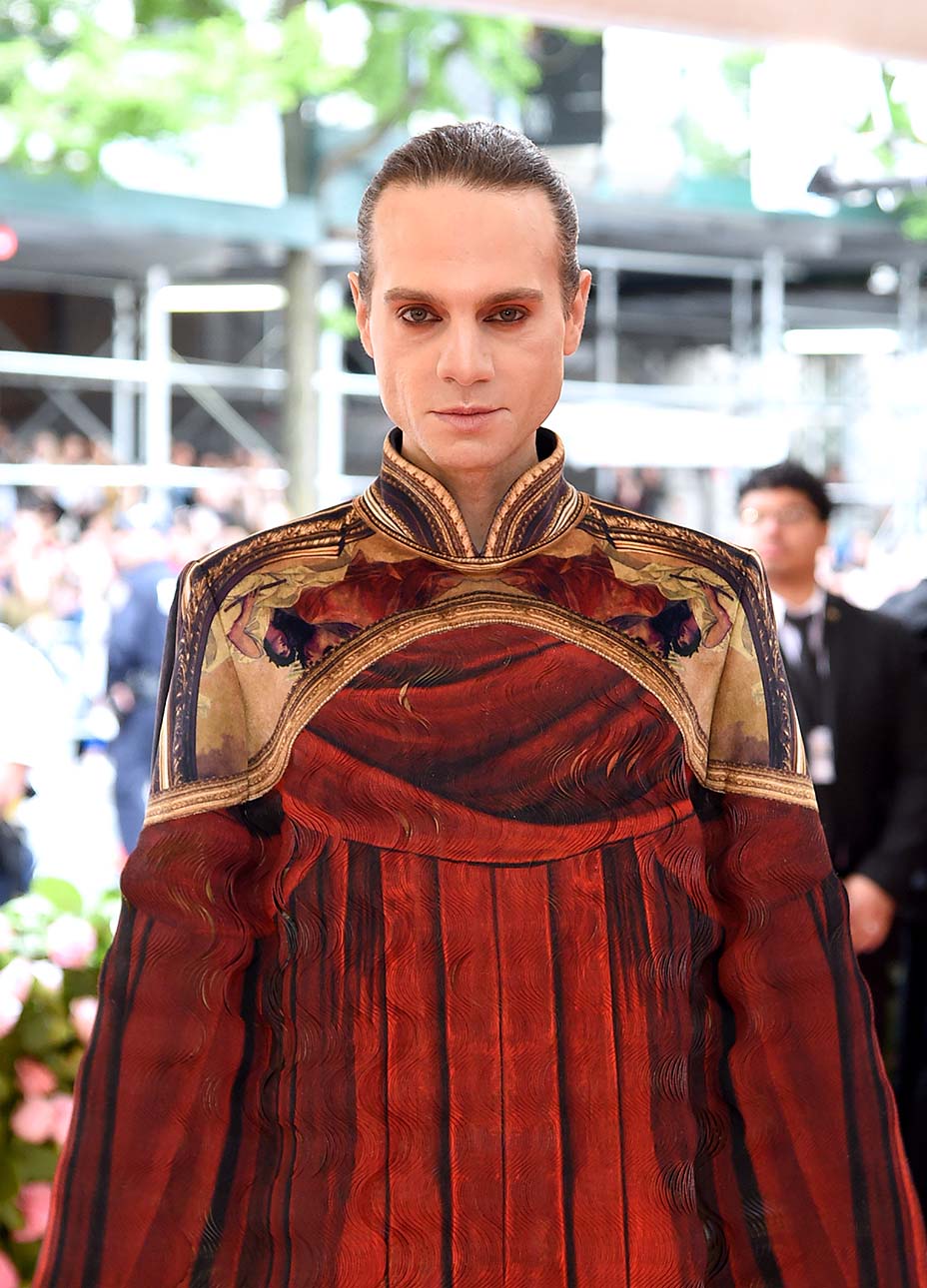 Tony Award-winning producer and theater owner Roth — a regular at the annual gala — leaned on makeup pro Maud Laceppe for his intensely glowing skin and smoky pink eye. Hairstylist Rutger pulled the hair into a taut half-up braid with a red ribbon entwined in the plait. It was a dramatic look that completed his apropos costume — a cape that expanded to reveal a picture of a theater. Lady Gaga told him he won “performance of the night.” 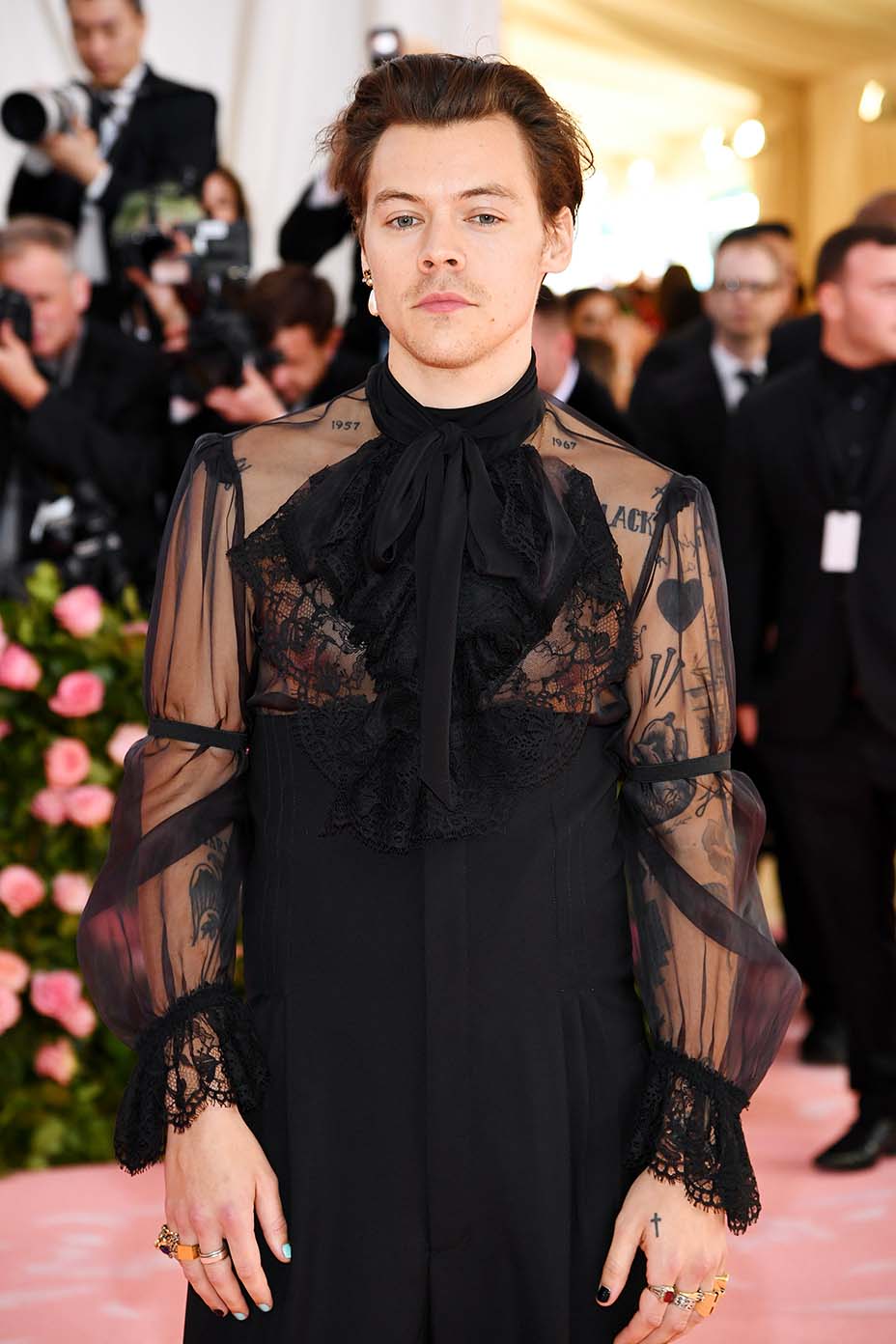 Though the fingernails were the most noticeable part of the singer’s primping (nail artist Jenny Longworth, who also works with Rihanna, used black and eggshell blue polishes), Styles did enlist Gucci makeup artist Thomas de Kluyver and hairstylist Anthony Turner for the night. The end look was low-fuss — shadow of a quirky mustache, groomed eyebrows and slightly tousled locks — but still intentional. 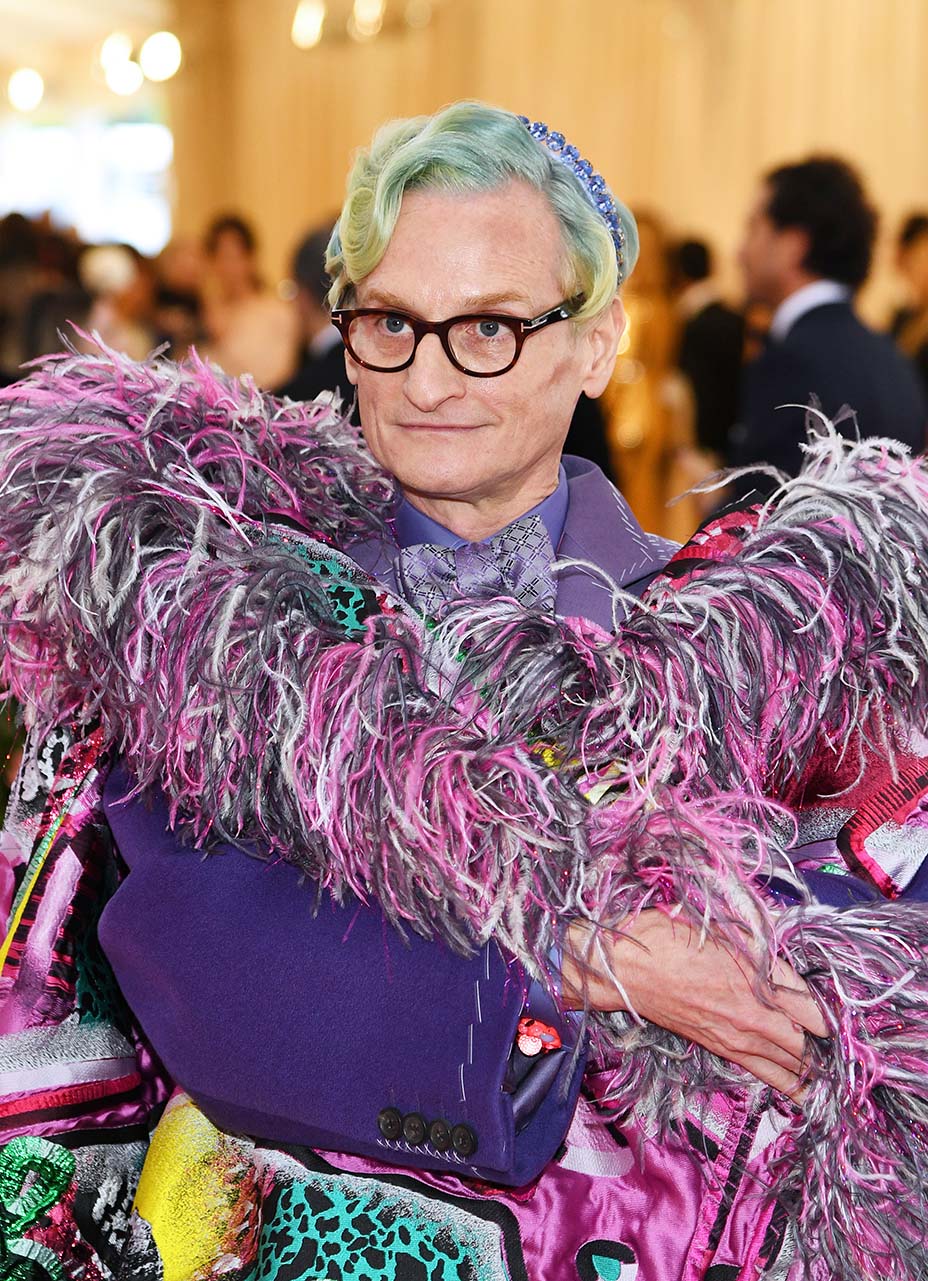 One of the night’s big trends was colorful hair, seen on Lucy Boynton, Regina Hall and Kylie Jenner. But at least one man got in on the pastel tress trend: Vogue international editor-at-large Bowles. The hair color, courtesy of Lena Ott of Soho’s Suite Caroline salon, sampled mermaid hair with a mix of yellow, blue and green. Hairstylist Teddy Charles placed the Stephen Jones Milliner tiara, bedecked with lilac Swarovski crystals, in the hair as a crowning finishing touch.

Met Gala: From Foil Lashes to Crystals, the Eyes Had It