Turns out the heralded smartwatch revolution hasn’t dethroned high-end watches on the wrists of Hollywood’s elite. In third-quarter 2016 (before the new launch), Apple Watch sales declined a precipitous 72 percent compared with last year’s period, according to a recent estimate. “I know quite a few men who’ve retired their Apple watches,” observes executive style consultant Dana Asher Levine. “The women still seem to be wearing their Hermes Apple — mainly for counting steps.” But traditional timepieces remain high on industry wish lists, as The Hollywood Reporter learned when it spoke with more than two dozen male watch collectors in film, television and related industries to find out what they are interested in buying right now as part of their business attire. Their choices, grouped into five categories below, start at $5K (for steel models), $19K (for gold) and can easily range into the high-five figures for complicated pieces.

Ask industry execs to describe their ideal work watch, and one style reigns supreme: a combination of sporty and dressy elements in one perfect-for-L.A. package — such as the updated Vacheron Constantin Overseas with easily interchangeable straps. It’s a favorite collection of Nickel City Pictures founder Vishal Rungta, who especially likes the new World Time model ($37,000) “with a blue rubber or leather strap to match the blue face,” he says.

For Chicago P.D. star Jesse Lee Soffer, who is itching to acquire a new Panerai Radiomir, such timepieces appeal because “you can wear them with jeans and a T-shirt or a three-piece suit.” Stylist Miles Siggins, who has dressed Ryan Seacrest, likes Panerai’s “basic” Radiomir Black Seal ($4,200-$7,200) because “it’s the watch they do that’s truest to the diver’s watch they started with.”

The Only Agency CEO Kent Belden calls Patek Philippe’s Nautilus (now celebrating its 40th anniversary with two new models) with moon phase and gray face “my newest obsession,” while UTA partner David Park is a fan of the storied watchmaker’s new $51,030 Aquanaut Travel Time in rose gold which features a dual time zone and gold numerals on an embossed chocolate dial. “It’s high-end luxury on a rubber strap. If you travel, this is the only watch you need,” says Park, who notes that several colleagues at the talent agency also have this watch. (For travel, Criminal Minds star Joe Mantegna also recommends Carl F. Bucherer’s $15,800 matte black Patravi Traveltec offering three time zones.)

Faking It actor Gregg Sulkin loves Audemars Piguet’s Royal Oak (particularly the Dual Time in pink gold), surely the most high-profile watch of the year thanks to its appearance on James Corden’s wrist on “Carpool Karaoke.” The Late Late Show host wears Audemars‘ Selfwinding model in stainless steel ($17,800). Other fans of the Royal Oak include Justin Bieber (who recently purchased one set with diamonds at L.A.’s Westime) and Denzel Washington. 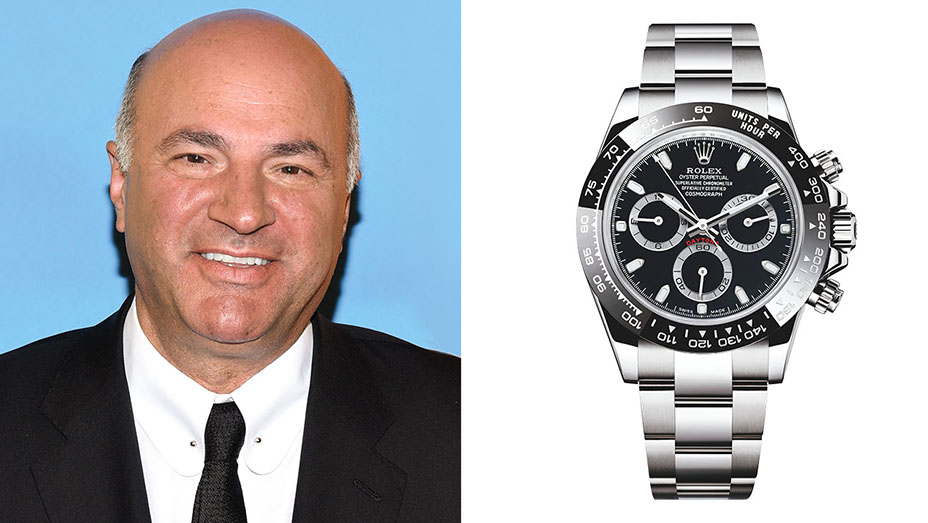 Hot right now are watches with a vintage feel, including the new Art Deco-inspired Cartier Drive, Glashutte’s Senator Excellence and IWC’s revamped Portugieser collection, whose fans include Dana Brunetti (who has one in platinum) Mother’s Day producer Mark Fasano, Underground star Aldis Hodge, and Westworld‘s James Marsden. He calls the $12,700 Portugieser Hand-Wound Eight Days Edition “75th Anniversary” in steel “a stunning timepiece with a beautifully clean dial, in-house movement and a clear nod to IWC’s historic Portuguese models from the 1940s. There are a lot of ‘heritage’ watches being made these days but very few as pretty or as meticulously crafted as this one.”

One retro piece is almost impossible to get: At Gearys‘ Rolex Boutique in Beverly Hills, the wait list is 20 to 30 deep (with long-term customers given preference) for the $12,400 controlled-production Rolex Cosmograph Daytona, a new interpretation in steel and ceramic of the watch that Paul Newman made famous. “They are incredibly hard to get but everyone wants one,” says Park, who notes that this watch on the resale market is already trading above list price. Some people on the wait list, says Gearys store director Daniel Chen, “are CEOs of companies who may have not yet built that relationship with the brand.” Ari Emanuel and Ellen DeGeneres wear vintage Daytonas while Jay-Z and Kevin Hart have been spotted with the coveted new model.

“I would buy one tomorrow if one were available,” says Amazon Studios senior business development executive Sadoux Kim. Adds Shark Tank investor Kevin O’Leary: “The trend is back to the past with these new models in terms of look and feel but with superior state-of-the-art movements.” 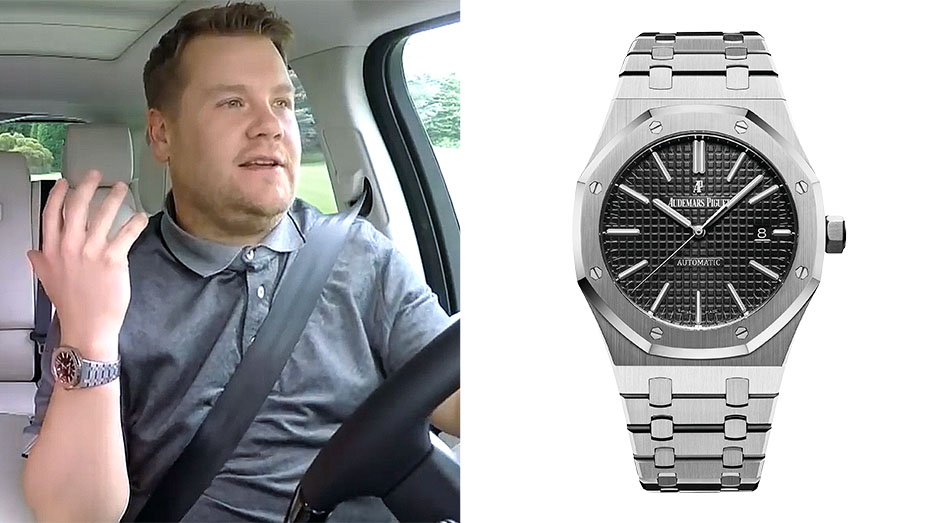 Only two major brands consistently increase in value: Rolex (which produces about 1 million watches a year) and the pricier Patek Philippe (about 50,000 a year). “Rolex and Patek over time are great performers,” says Million Dollar Listing star agent Josh Flagg, who has one of Patek’s World Time models on his wish list.

According to watch sales site TrueFacet, some Patek Nautiluses from the 1970s, for example, now sell for about $45,000, more than four times their original price. “This is based on desirability and rarity,” says TrueFacet CEO Tirath Kamdar.

And despite the trend in Hollywood toward more sporty watches, collectors in Los Angeles make an exception with Patek, embracing even their more formal pieces.

“If money were no object, I would buy a Patek Philippe 5170G, a white gold manual wound chronograph with in-house movement,” says Marsden. “I would have trouble deciding between the white dial and the black dial and how old my son would have to be before I passed it down to him.” 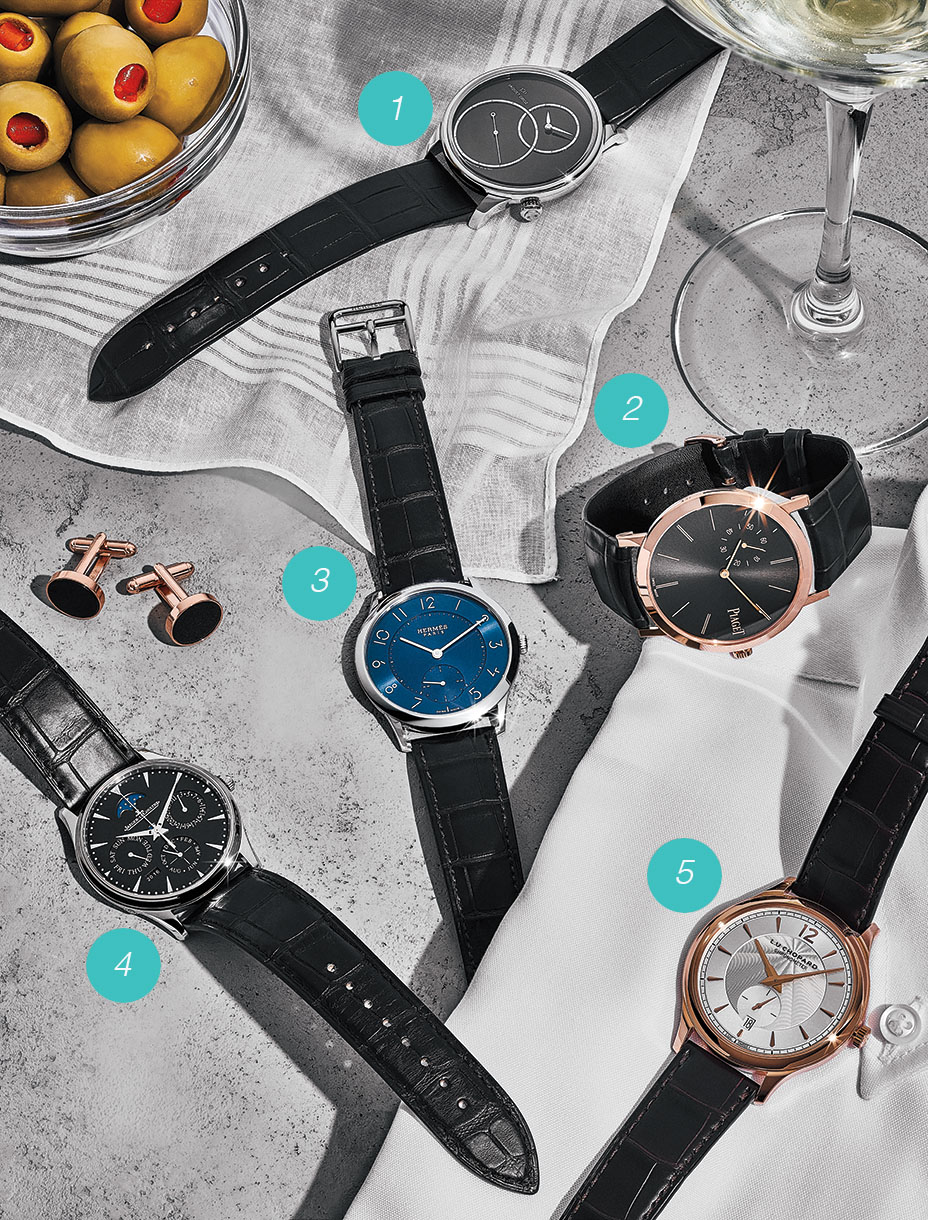 2. A slate gray dial is offset by a 40mm case in 18-karat pink gold on Piaget’s latest ultra-thin Altiplano. Matt Damon and Michael B. Jordan have worn Altiplanos on the red carpet; $19,000, at Piaget, New York and Costa Mesa 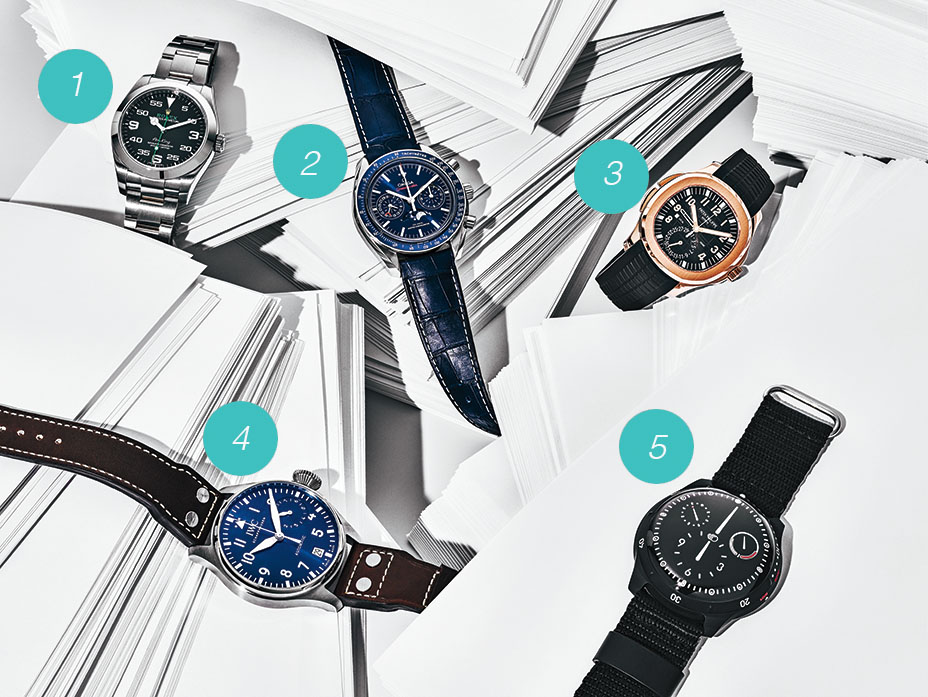 1. For 2016 Rolex relaunched its iconic Oyster Perpetual Air-King with a 40mm case in stainless steel and a new black dial featuring the Air-King logo in the original 1950s lettering; $6,200, at Gearys on Rodeo Rolex Boutique, Beverly Hills

5. The 46mm Ressence Type 5.1 AM dive watch contains mineral oil in the dial, giving it a unique, highly graphic look and increasing legibility underwater. The sleek, no-crown watch is wound and set using the caseback. James Murdoch and former Nest CEO Tony Faddell are fans of the brand; $35,800, at Jewell’s at Galpin Premier, Van Nuys 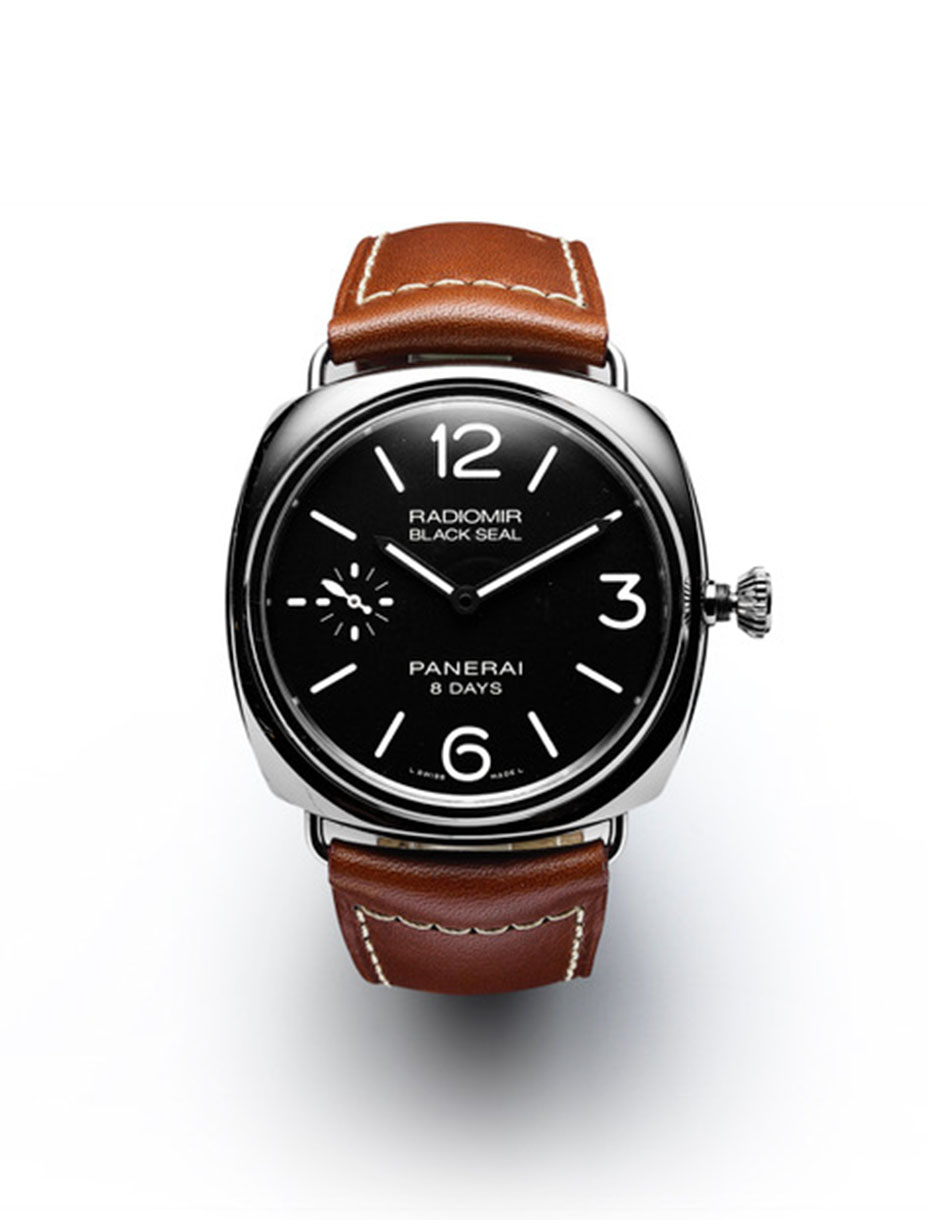