Many guests of Monday night’s Met Gala embraced the theme — the marriage of fashion and religion, as seen in the Costume Institute’s about-to-open exhibition, “Heavenly Bodies: Fashion and the Catholic Imagination” — with gusto. References ranged from the subtle (many gold gowns, a hue that symbolizes majesty and celebration in the church) to the overt, most notably Rihanna’s elaborately beaded mitre by Maison Margiela Artisanal and the oversized angel wings, a custom design from Donatella Versace, sported by Katy Perry.

Naomi Watts, 'Goodnight Mommy' Team on How They Navigated Those Bandages on Set and Used Them to Up the Film's Tension 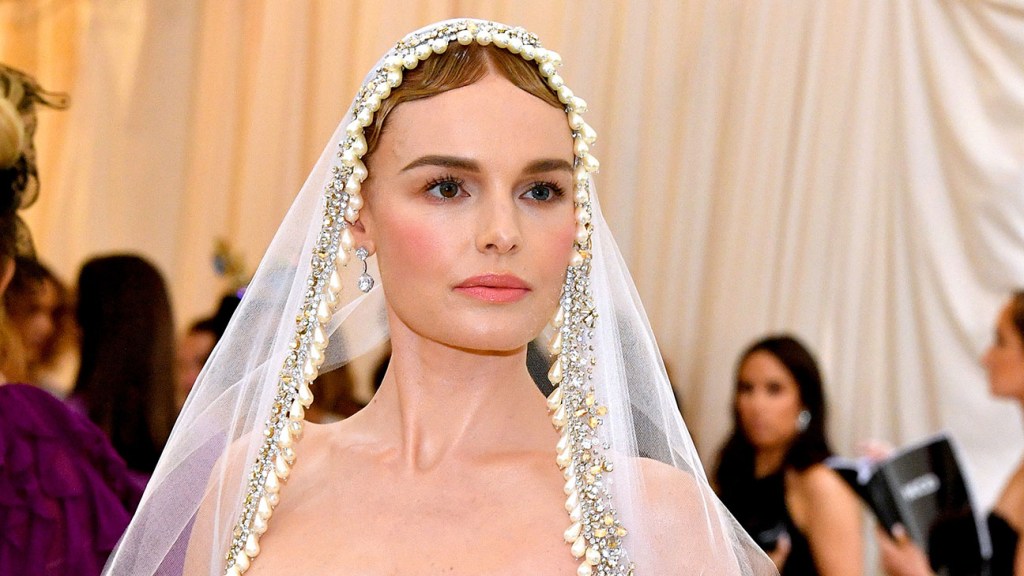 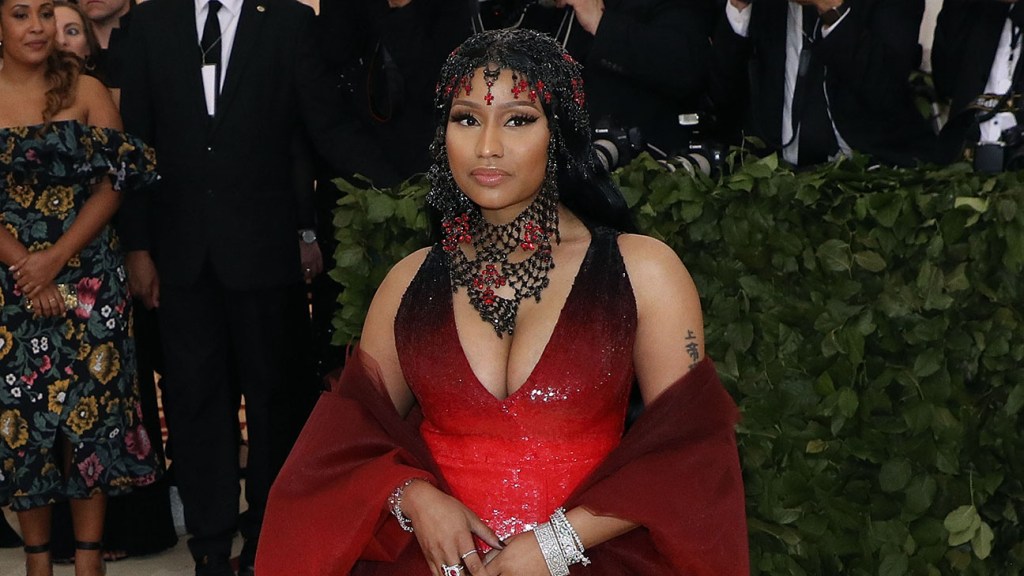 “[Kate is] our angel, and Nicki is temptation, and I’m the nun,” explained Kim, in a simple black column gown with white fur capelet. Asked how she liked playing temptation for the night, Minaj responded, “I don’t mind tempting the boys.”

Curator Andrew Bolton had mentioned earlier in the day that the designers featured in “Heavenly Bodies” largely were raised as Catholics, and Donatella Versace, whose label is among the exhibition’s sponsors, is no exception. “I grew up with the church, so I’m only feeling joy tonight,” she said on the red carpet, adding that her jubilance extended to seeing her designs share space with those of her late brother in the Metropolitan Museum’s galleries. “I would never dream in my life that this would happen, that Gianni’s work and my work would be together like this.” 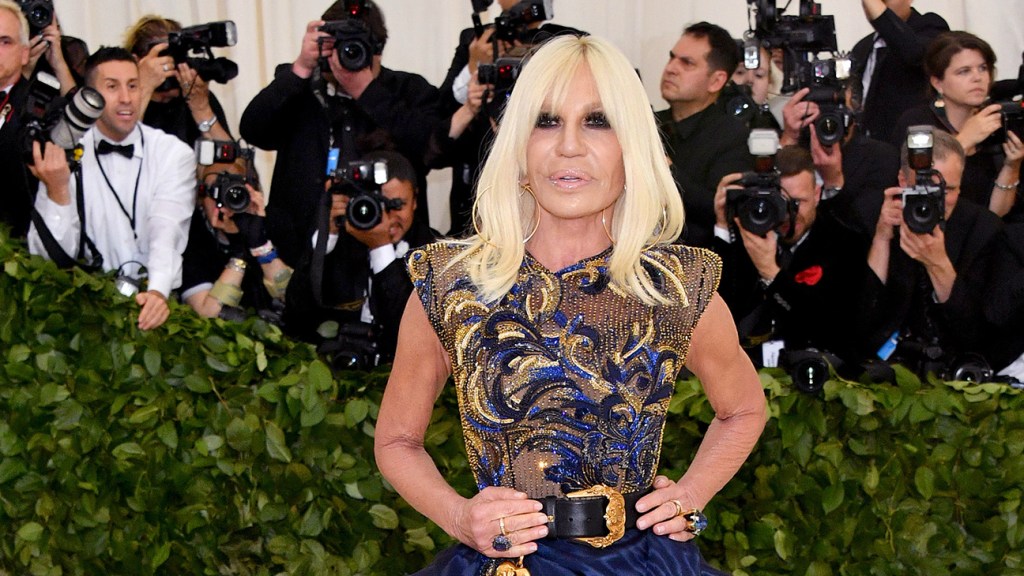 Balmain’s Olivier Rousteing dressed a bevy of beautiful women, including Juliette Binoche, Natasha Poly and Natalia Vodianova, but he couldn’t take his eyes off of Jennifer Lopez, who was wearing a beaded, feathered gown dominated by a blue cross that evoked thoughts of stained glass. “She’s just stunning; I wanted to make sure the dress I created corresponded to her beauty,” Rousteing said. 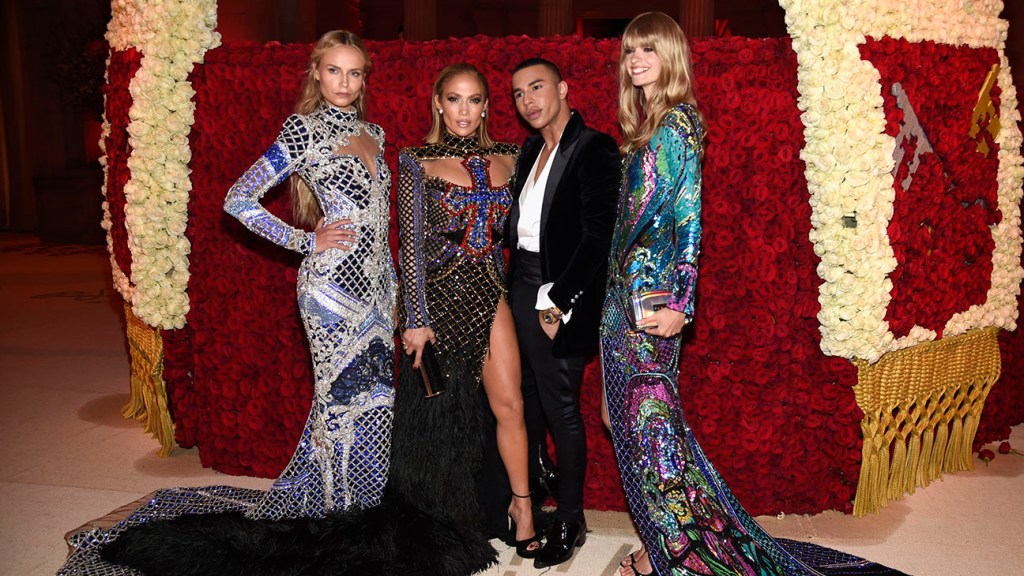 Does religion play a role in his work? “The evening’s theme means a lot to me, because we need to have faith,” Rousteing said. “I’m really happy because I wanted to create clothes that felt like couture: strong, iconic, something we’ll all remember. Every day as designers, we think about what’s trendy and cool. But tonight is not about being trendy and cool; it’s about being epic and iconic and not forgetting the night. So I worked on clothes that are more timeless than just about being cool.”

Custom looks by Michael Kors included pink taffeta and tulle for Tracee Ellis Ross and emerald silk for Karen Elson; he walked the red carpet with Naomi Watts, who wore a white crepe gown and capelet richly embroidered in gold. “It’s a night about opulence and artistry, and for me it’s always about framing the woman and making her look her best — and what a great picture to frame,” Kors said, referring to Watts. The actress added that she was eager to view both the exhibition and fellow guests: “It’s a great theme for fashion, because there’s reverence and rebellion.” 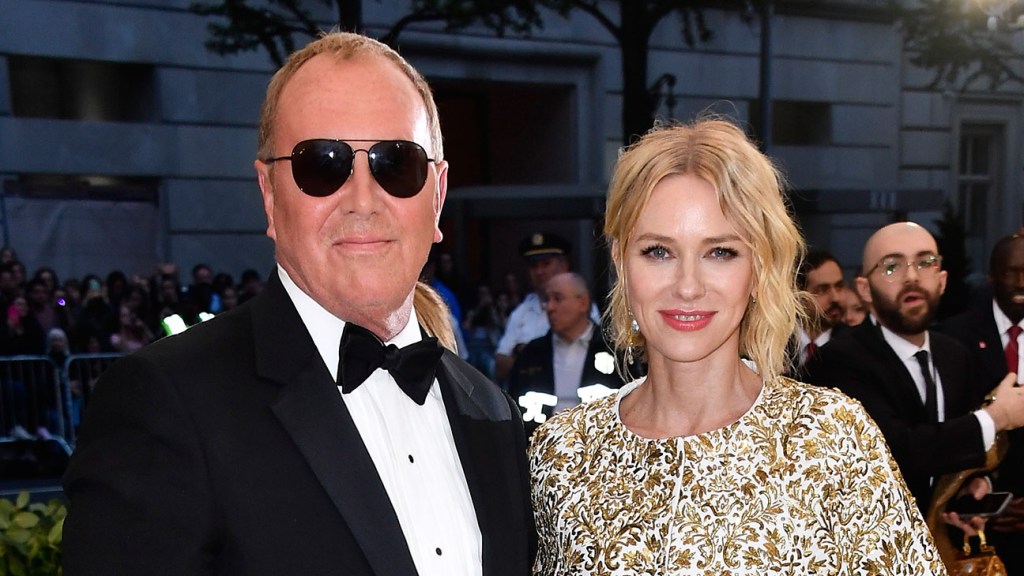 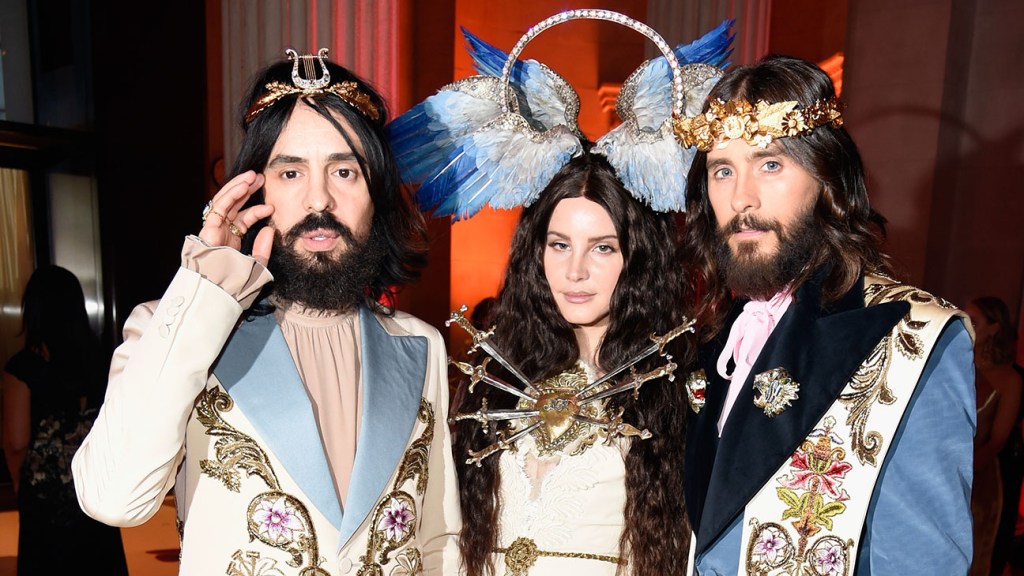 Gucci’s Alessandro Michele indeed walked that tightrope. His long-sleeved, embroidered gown and headdress for Lana Del Rey was inspired by Our Lady of Sorrows, one of the many names ascribed to the Virgin Mary, while Jared Leto’s look included an embroidered liturgical stole and oversized black lapels embroidered with golden angels. “It’s the first haute couture on earth, really the first one, that’s why I love it,” Michele said of religious vestments.

You had to look closely at the diminutive pin, a vintage piece from the 18th century, on the lapel of Zac Posen’s Brooks Brothers tuxedo to notice that it was an enamel snake wrapped around a gold tree branch, accented with a diamond. “Aristocracy and religion are what funded and supported the arts, within music and into fashion and architecture, for centuries,” he said. “I think [the theme is] absolutely appropriate and kind of exciting, especially to see the incredible pieces that came from the Vatican.”

Posen’s Met Gala designs included a regal gown in teal satin for former Wonder Woman Lynda Carter and a black moire-silk gown and sculptural cape for model Imaan Hammam. “Moire is a very traditional fabric used in a lot of vestments,” Posen explained. “[The design is] just about a form that holds power and elegance. I wanted to create something that spoke obviously to the theme, but also to all religions, different shapes that are powerful and also a cross-section of a lot of different beliefs.” 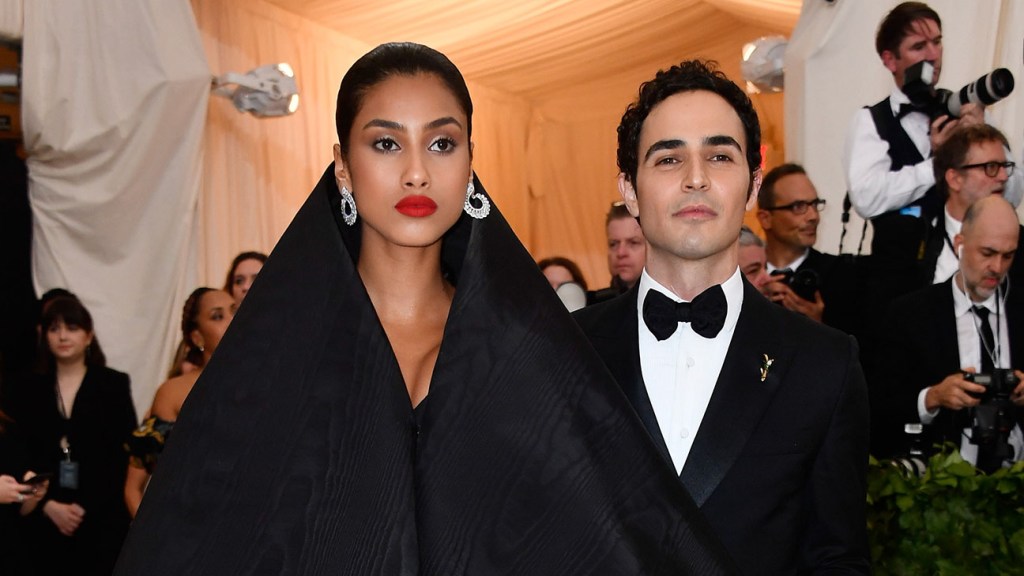 Marc Jacobs, meanwhile, noted that he considers himself more spiritual than religious. “I love clothing and I love fashion,” he said. “I’m religious about my appreciation for anything that makes the world a more beautiful place.” Jacobs surely succeeded with his design for Janelle Monae, a graphic gown with matching jacket and train in her signature black and white, a look the pair agreed was an enthusiastic collaboration. 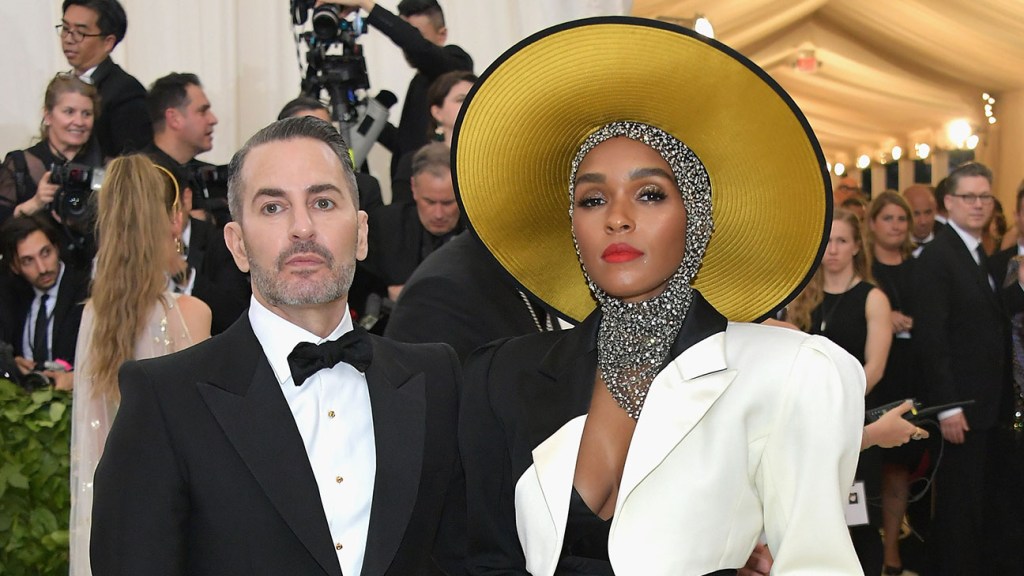 “I’ve been wanting to work with Marc for a while now. I’m such a fan of his, so when he reached out, I said, ‘Absolutely,'” Monae said. “We wanted to do the perfect blend of Janelle Monae and Marc Jacobs, while also sticking with the theme of the evening.”

Monae added that she was delighted to embrace the night’s theme. “I like to learn from all different religions; God is love, and I’m here tonight to learn and to give love,” she said.

Accompanied by his fiance, Char Defrancesco, Jacobs quickly co-signed on that concept. “We’re newly engaged, so we’re happy to support that,” the designer said. “The night is all about love.”