Continue to The Hollywood Reporter SKIP AD
You will be redirected back to your article in seconds
Skip to main content
May 6, 2019 5:06pm

The designs Zac Posen created for Monday night’s Met Gala have been one year in the making.

The day following the 2018 benefit for the Metropolitan Museum’s Costume Institute, Posen sat down for lunch with Linda Boff, chief marketing officer for General Electric, who asked the question any creative person hopes to receive: What have you always wanted to do? “I’ve always wanted to 3D-print some gowns and dresses,” Posen told her. Next thing he knew, they were flying to Pittsburgh to meet with plastics scientists, engineers and industry designers from GE Additive, one of the divisions that oversees the company’s forward-thinking technologies, including 3D printing. “Touring that facility and seeing what they are already doing really got my imagination going with what could be possible,” he says.

“It became very clear in our conversation that Zac is more than a fashion designer — he’s an innovator who loves fashion and technology, so it was a real meeting of the minds,” Boff adds.

When Posen and his guests ascend the steps of the Metropolitan Museum of Art — they’re expected to arrive at 7:45 p.m. — red carpet watchers will get their first glimpse at how the designer has melded the transformative technology of 3D printing with his markedly romantic aesthetic. Among the nine guests accompanying Posen this year — the first time he’s hosted a Met Gala table — five will wear looks featuring 3D printing: Katie Holmes, Nina Dobrev, Julia Garner, Deepika Padukone and Jourdan Dunn. Each design explores the 3D technique in a unique way while also resulting in a gown or dress that suits the woman’s style and personality, Posen says. 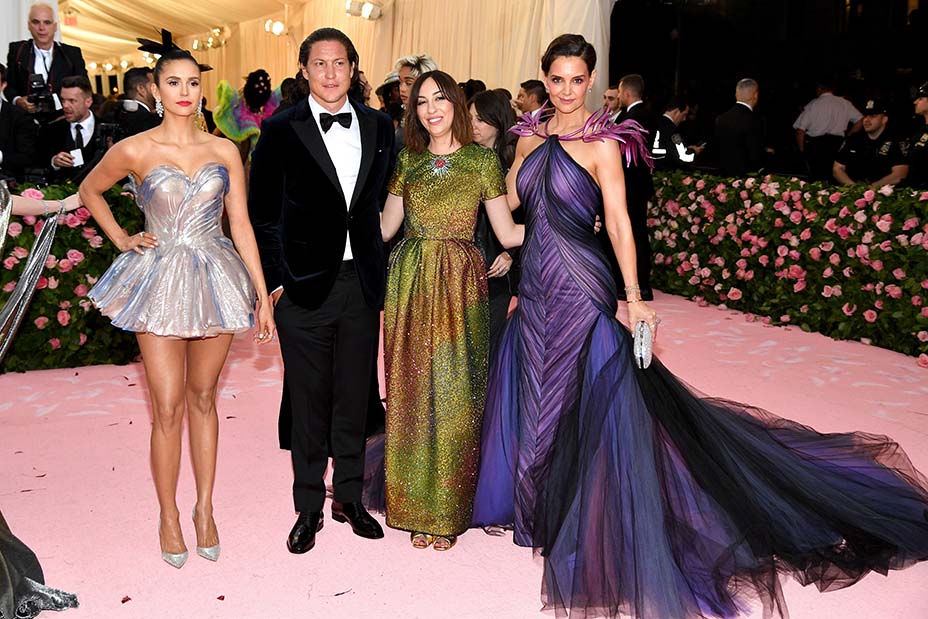 For Holmes, Posen created what he calls “a real glamour piece in a Prince purple metallic,” a 3D-printed palm-leaf sculpture that rests on the actress’ shoulders and tops a gown crafted of 300 yards of multicolored tulle. “I wanted to use this tulle almost as a watercolor; there’s a grandeur about it, but you also think about a purple sunset and the shadows created by palm leaves,” Posen explains. “I’m so close with Katie, so it’s truly been a labor of love, combining the accent of this technology and thinking about her personality and her skin tone. And I always love when Mother Nature inspires fashion.”

Perhaps no design exemplifies that idea more than the dress Posen created for Dunn. He was inspired by the deep red tones of Mr. Lincoln roses and conceptualized a design featuring 21 individual rose petals, as well as petal-inspired pieces for the front and back bodice, weighing one pound each and averaging 20 inches in size. Printed in sets of three at roughly 100 hours each at GE Additive’s Protolabs facility in Raleigh, North Carolina, the petals then were affixed to a titanium frame molded to the shape of Dunn’s body (each woman wearing a printed piece was 3D scanned at the start of the design process). “We spent about five months really refining each petal, looking at them in digital 3D and doing models in advance,” Posen notes. “Then we created this magical lacquer so the color shines and seems to shift as Jourdan moves.”

Dobrev, meanwhile, will wear a 3D-printed bustier also crafted at a Protolabs facility in Germany; the four pieces created to ensure a custom fit required 200 hours to print. The bustier’s shimmering plastic is meant to evoke an effect of transparent crystals, while the design is finished with draped fabric. “It’s an homage to sculptures in a museum,” Posen says. 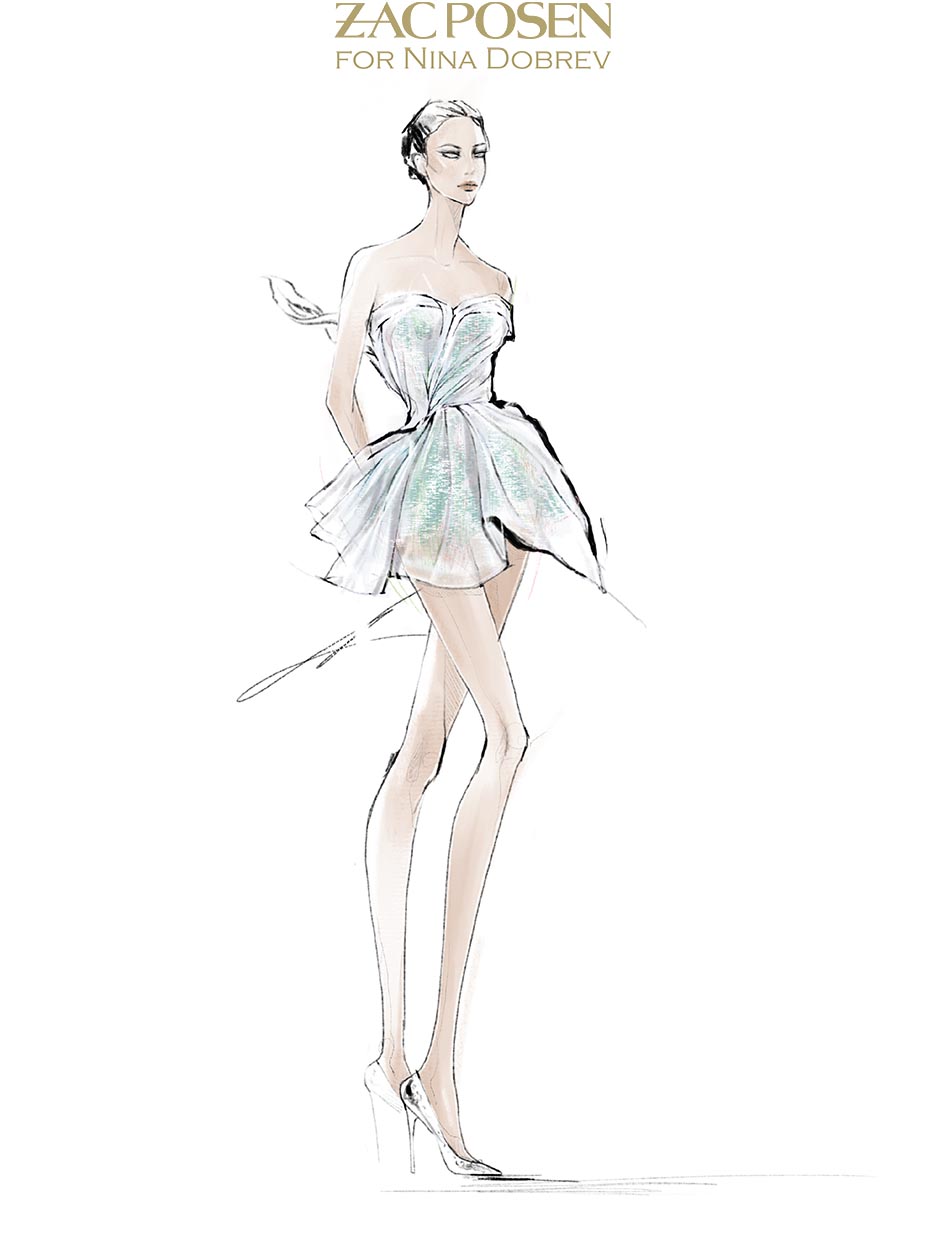 Garner will wear a custom lamé gown crafted in an ombre effect of silver to gold, accessorized with a 3D-printed vine headpiece with leaf and berry embellishments, while Padukone, a superstar in her native India, will wear a custom gown of pink lurex jacquard embellished with 3D-printed pieces meant to resemble embroidery.

“I went underwater for that one and started looking at deep-sea creatures and the effect of light and scale,” Posen says of his inspiration. Also at Posen’s table: Gia Coppola, who will wear a custom gown in chartreuse satin, as well as Andrew Garfield and Vito Schnabel, both in tuxedos by Brooks Brothers (Posen has been the creative director of that label’s women’s wear since 2014). 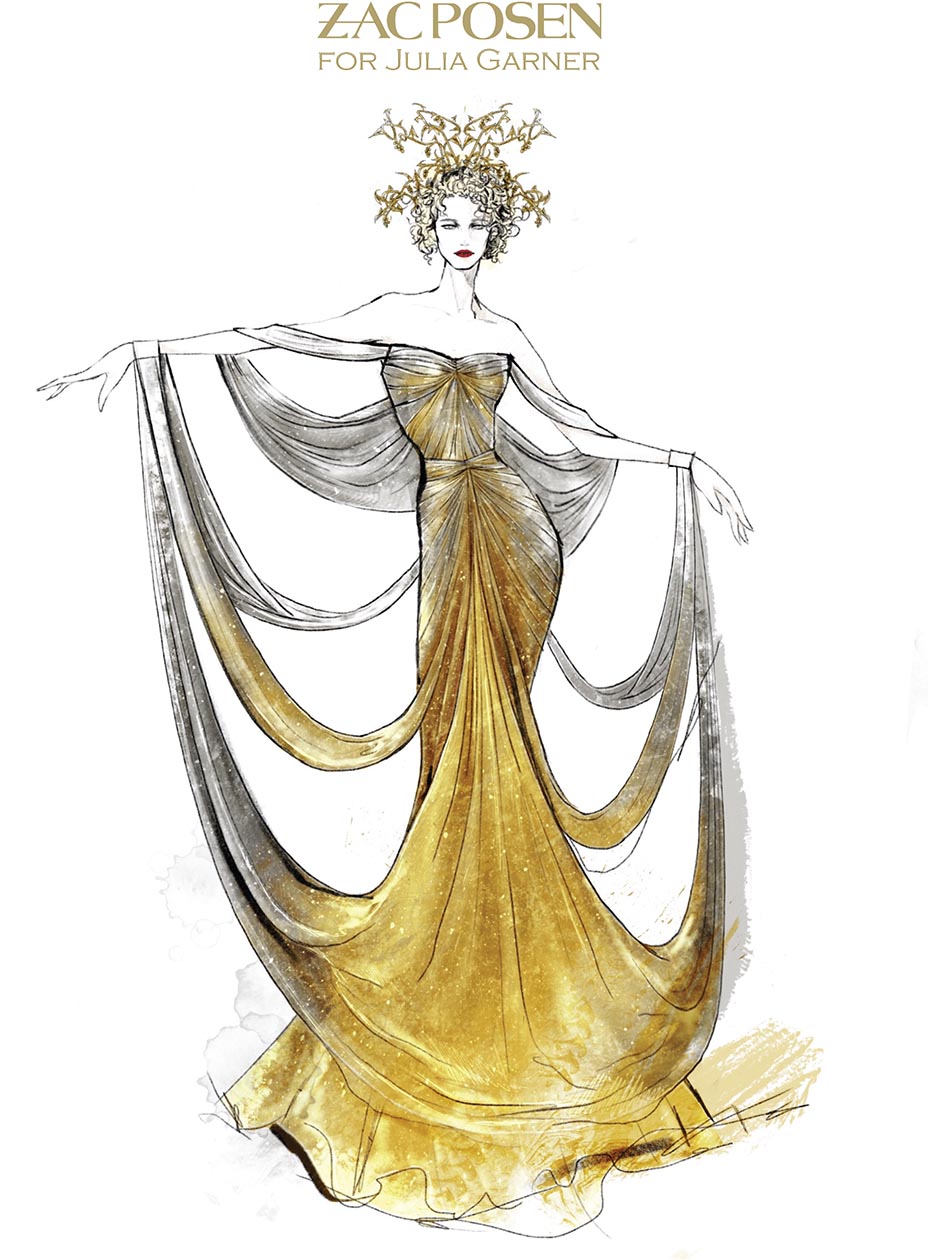 While the overall concept of 3D-printed designs was born 12 months ago, Posen didn’t fully flesh out the designs until the museum’s exhibition, “Camp: Notes on Fashion,” was announced last fall. “Then we really hit the ground running, figuring out how the sculptural elements would be incorporated with the work of our studio,” Posen says. “These pieces have been 3D-printed throughout America and in Germany, both the plastics and the different metal finishes, but there’s also a lot of incredibly technical work happening in our studio. And it will go down to the last minute.”

For GE, Boff believes the designs seen tonight offer a high-profile opportunity to demonstrate both the versatility and innovation of 3D printing. “It’s an example of what the Additive team can do for all customers,” she says. “As we build an awareness of the impact of this emerging technology in spaces like aviation, aerospace and medical, we’re always looking for memorable ways to do that. This collaboration with Zac is one of those rare moments, and we’re incredibly fortunate that he not only had the idea, but also the wherewithal to follow through with it.”

Ultimately Posen says he has enjoyed every minute of the education process, also because it will culminate in a bit of a full-circle moment as he and his guests ascend the museum steps on Monday evening. When he was a teenager, Posen interned at the Costume Institute for three summers between the ages of 16 to 18, and tonight he returns, not only as a New York designer with a successful eponymous label, but he’s also pushing boundaries as he addresses the time-honored question often asked on nights such as this: Is fashion art?

“I spent so much time looking at all the materials and the different structural weights; GE Additive did all the engineering, but I really loved learning what was possible,” Posen says. “Beyond that, there was always a central thought: How do you create something that evokes emotion and surprise, but also pushes the notion of fashion as an art form? Because I do think that idea is more important than ever.” 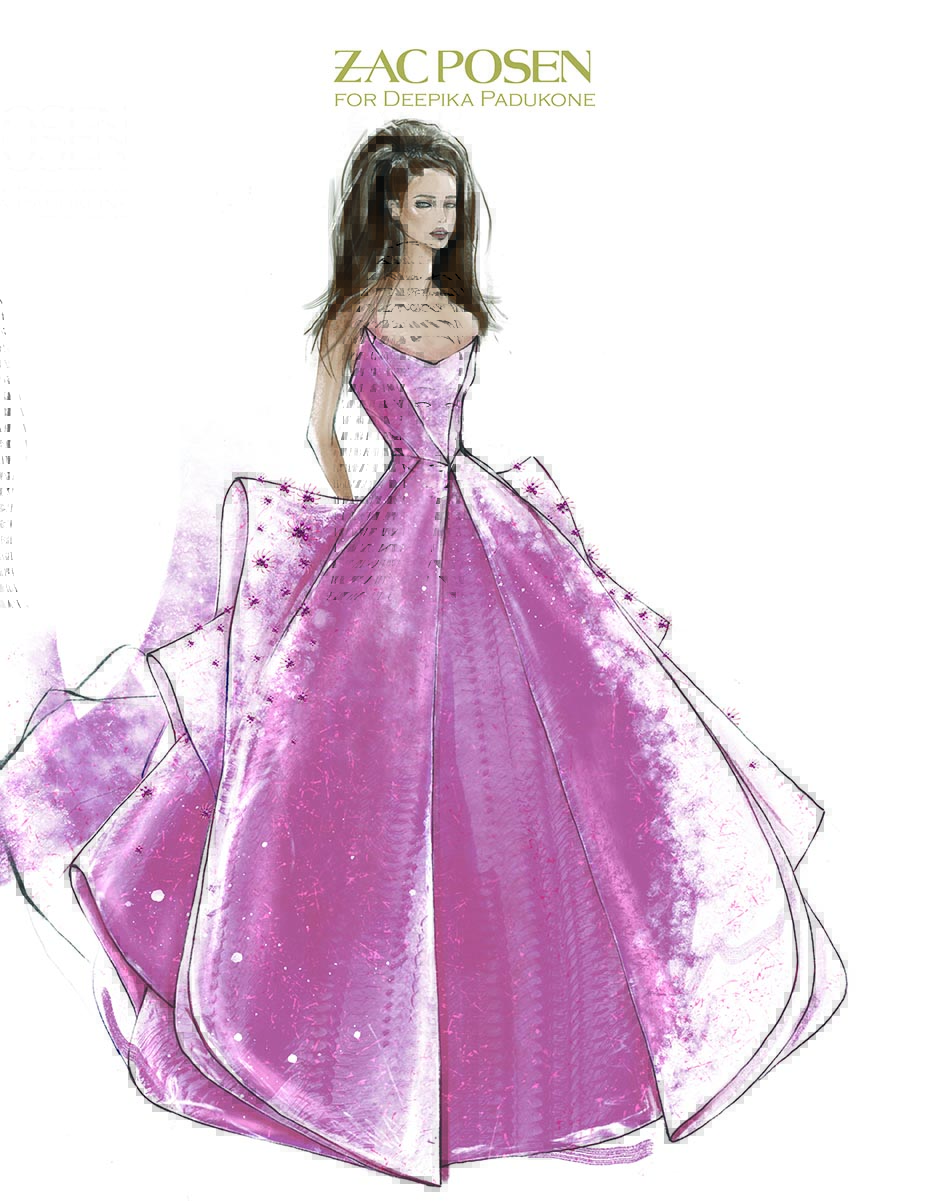