By now, we all know that the Met Gala is a little couture, a little costume party. And that was the case Monday night, when the dress code for the opening of the museum’s “Heavenly Bodies: Fashion and the Catholic Imagination” exhibition was “Sunday Best,” and the red carpet had enough crosses, crowns and halos to fill a firmament on high.

They came dressed as saints, sinners, angels, even a female Pope, which made for some sublime and some ridiculous fashion statements. And yet somehow, they managed not to offend, perhaps because over the years, the rules of faith have become nearly as elastic as the rules of fashion, at least among the Hollywood and pop music crowds in attendance, that you really can do whatever the spirit moves you to do. Because most of it, we’ve seen before. 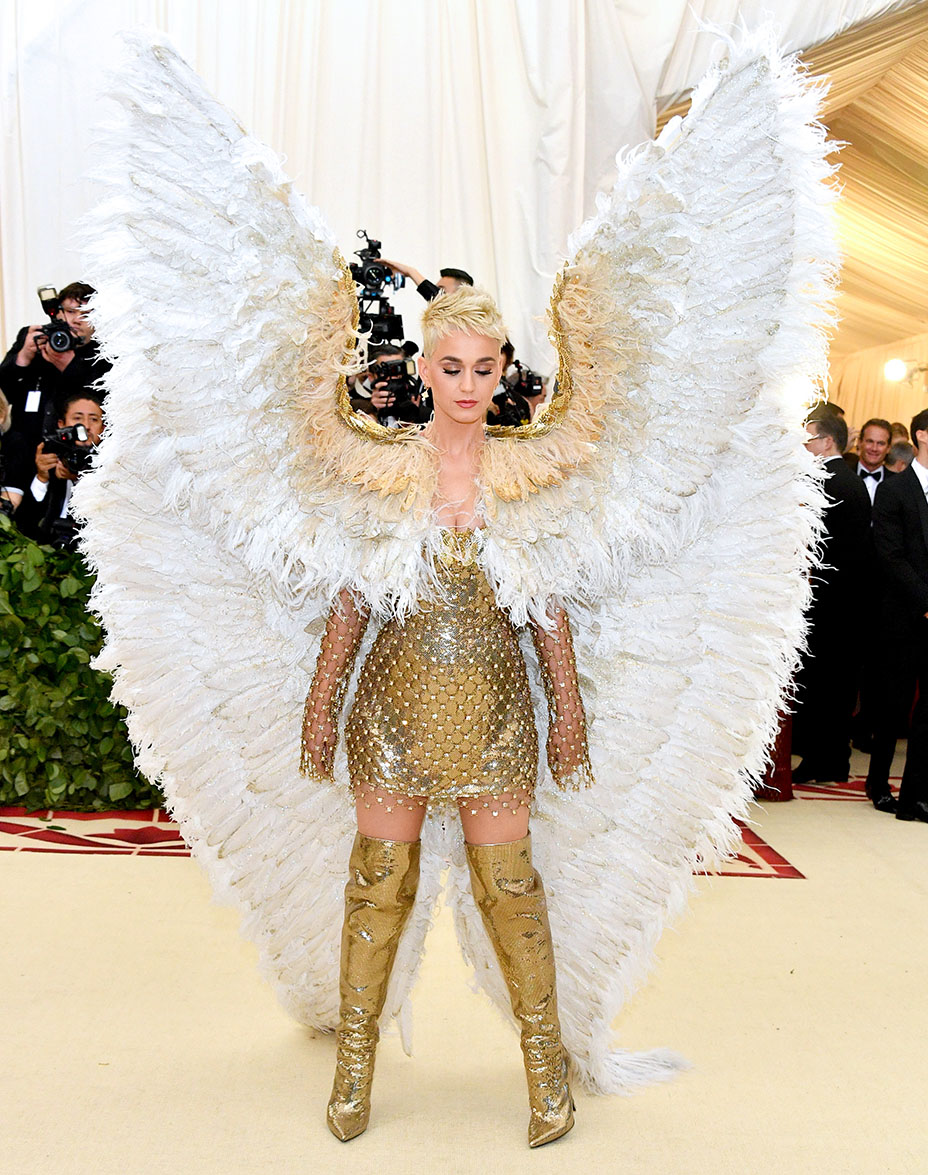 On the kitsch side, there was Katy Perry in six-foot-wide Versace angel wings and gold go-go boots, and Sarah Jessica Parker wearing a Dolce & Gabbana baroque-patterned cathedral train and an actual Nativity altar on her head.

Both were outdone by Rihanna, reigning goddess of the Met Gala red carpet. She stuck it to the patriarchal Catholic church by dressing as the female leader it’s never had, wearing a 1934 Cartier pendant as a necklace and a custom corseted minidress by the fashion world’s recently redeemed designer, John Galliano. (Galliano, you’ll remember, was caught in a camera phone recording making anti-Semitic remarks, a sin that resulted in his fall from the house of Dior in 2011. Now he’s at Maison Margiela, and the gown he made for the pop star took 250 hours to sew, 500 hours to embroider and was accessorized with a papal tiara.) Lena Waithe also made a political statement, wearing the rainbow-colored flag of LGBQT activism. 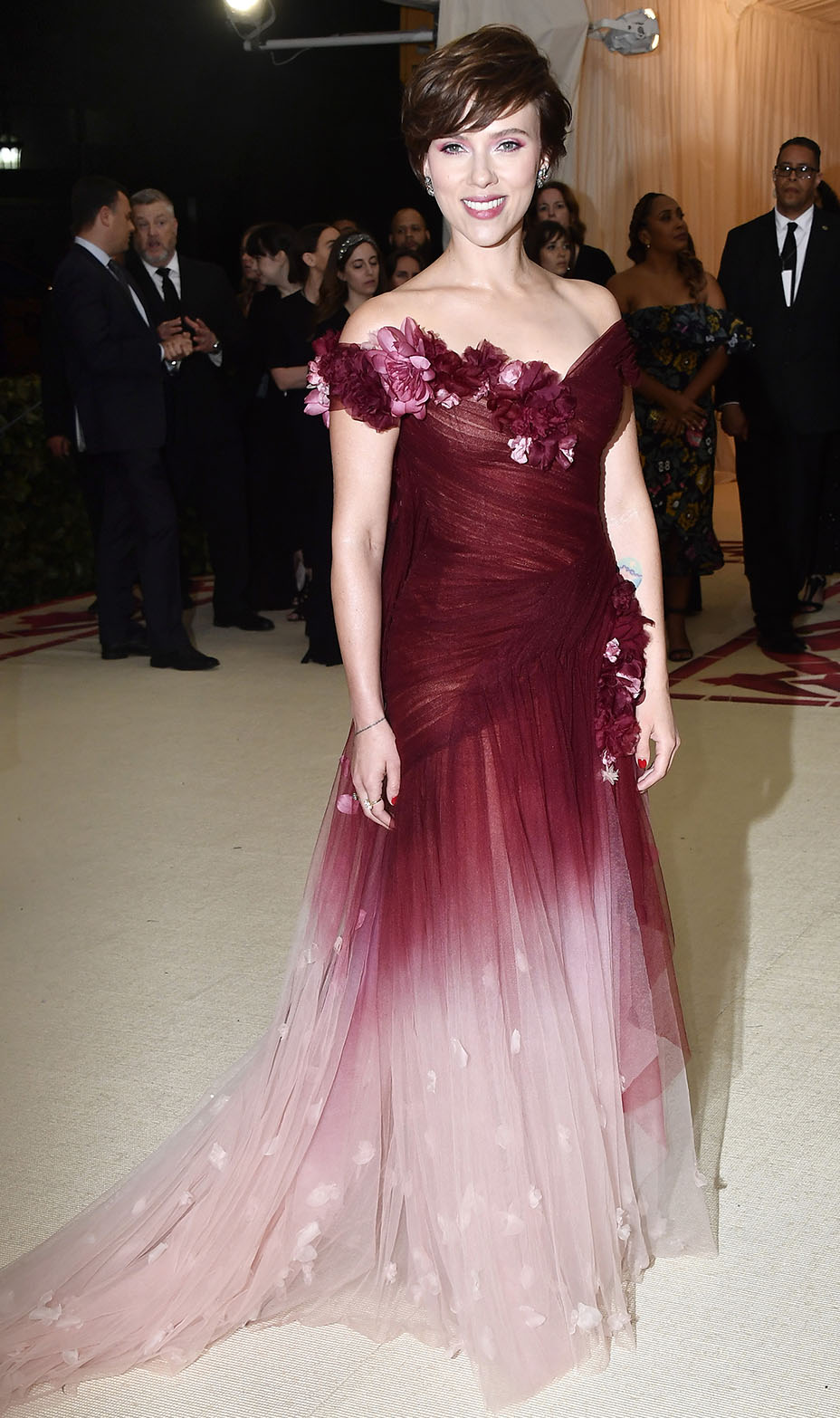 In the spirit of forgiveness, Scarlett Johansson stepped out in a dip-dyed, scarlet-red gown by Marchesa, the brand co-founded by Harvey Weinstein’s ex-wife Georgina Chapman. Johannson is the first A-lister to wear the brand on the red carpet since the sexual harassment scandal broke, staining Marchesa’s Hollywood appeal.

Speaking of scandal, although Kim Kardashian West was in attendance, in a Versace gold chain mail gown, husband Kanye sat this one out, perhaps to prevent any awkward political proselytizing IRL. 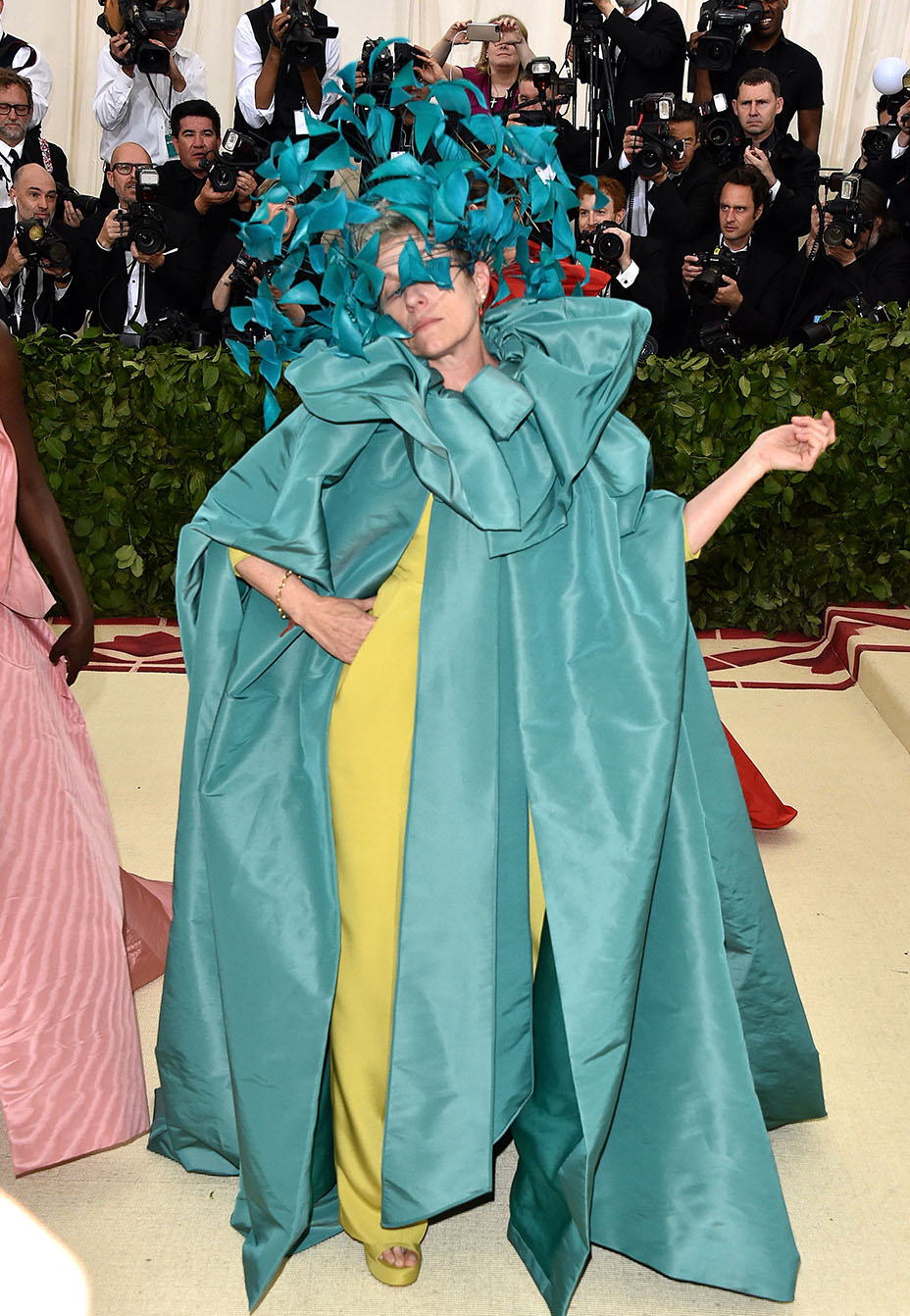 Despite several Halloween-worthy looks, there was an unusual air of respectability on the red carpet, in other words, no nearly naked dresses or butt-baring gowns. There were actual holy rollers in attendance, after all, including men of the cloth, and I don’t just mean designers.

Madonna looked positively pious in a covered-up Goth gown with cross motif by Jean Paul Gaultier, the French couturier who has been an architect of her looks since she was getting condemned by the Vatican for wearing cone bras. And yet, she was not as covered up as Frances McDormand, the red carpet’s unlikely renegade, who doesn’t wear a stitch of makeup but by god wore Valentino haute couture with a butterfly-swarm of a headdress. 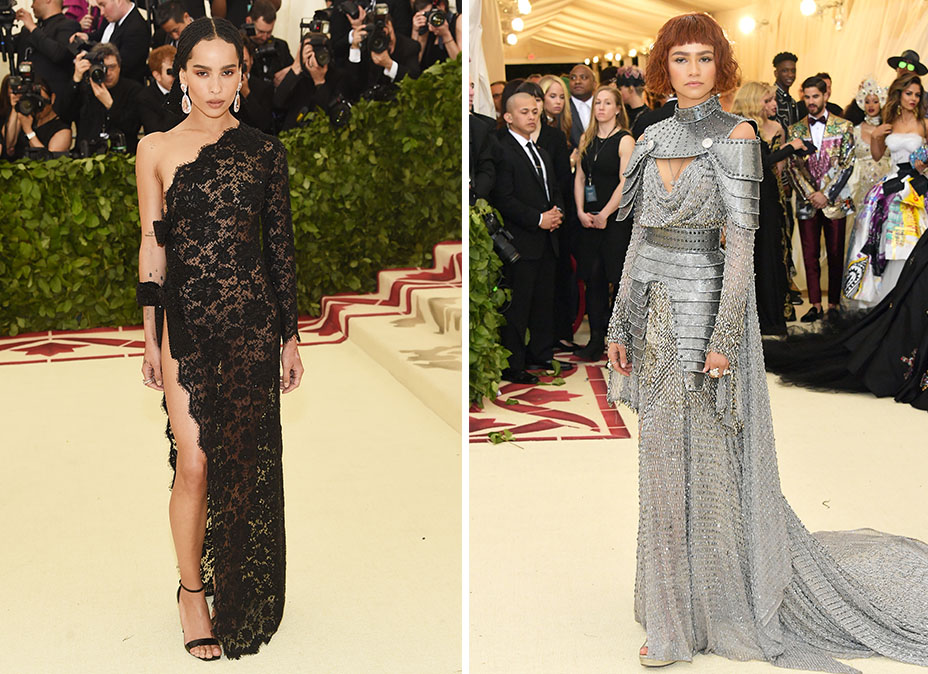 Also in the more avant-garde section of the congregation, Zendaya played saint Joan of Arc in a remarkable, armor-like gown by Versace, while Zoe Kravitz was more sexy sinner in a Saint Laurent dress that showed off her heavenly bod, with nothing but ribbons holding it together on one side, and Cara Delevingne dressed like a fashion interpretation of a confessional box in a Dior haute couture cage gown with a beaded curtain veil. 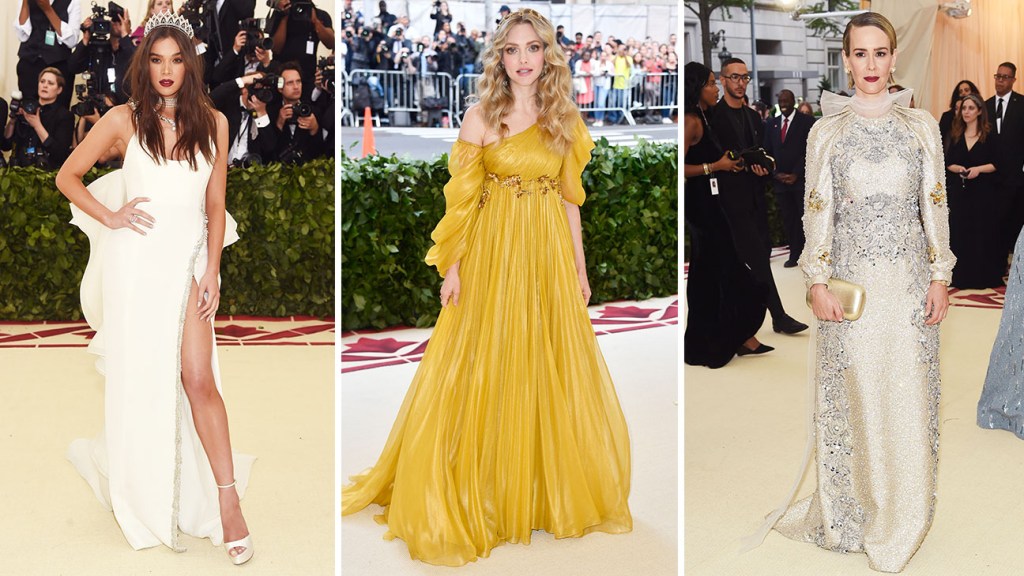 There also were those who approached getting dressed for the evening with a more quiet grace, namely Sarah Paulson in a Prada column gown covered in pale gold and silver lamé embroidered with tiny crystals, and accented with a white tulle bow at the neck, which made her appear somewhat ethereal. Also in Prada, Amanda Seyfried resembled a Renaissance goddess in a billowy gown the same golden color as the Vatican City flag, and Ariana Grande paid homage to the Sistine Chapel, wearing a Vera Wang ball gown in a painterly organza after Michelangelo’s “Last Judgement” fresco. 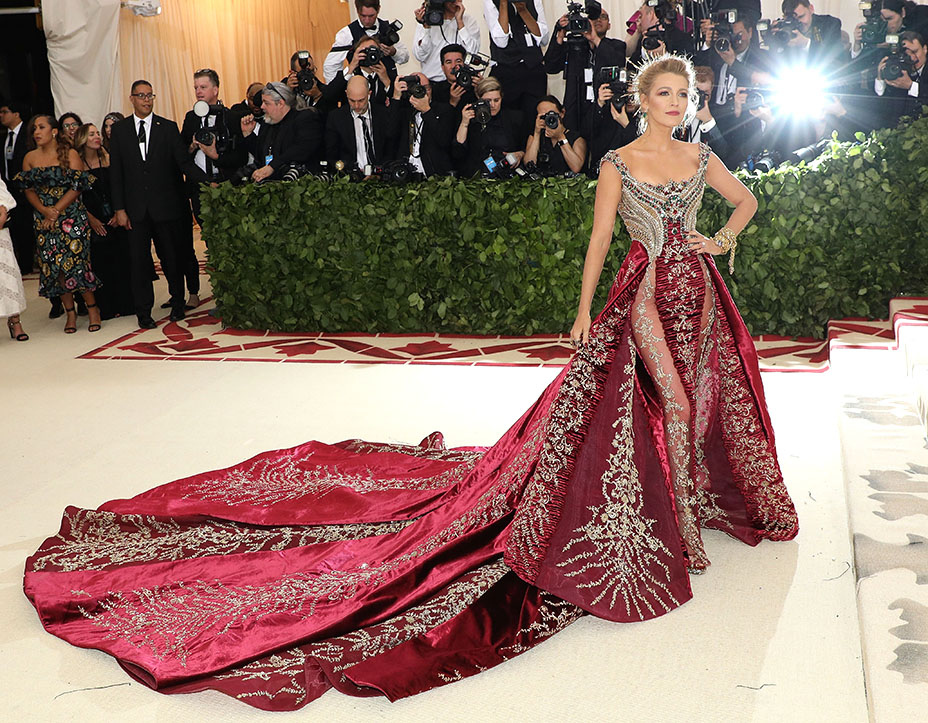 Prabal Gurung dressed several guests, including Hailee Steinfeld in a dove-white, crepe tank gown with sculptural winged train and hand-embroidered pearl and diamante 3D thorn straps. Meanwhile, of all the evening’s splendorous Versace creations, Blake Lively’s regal-red, gold-stitched gown may have been the most divine. 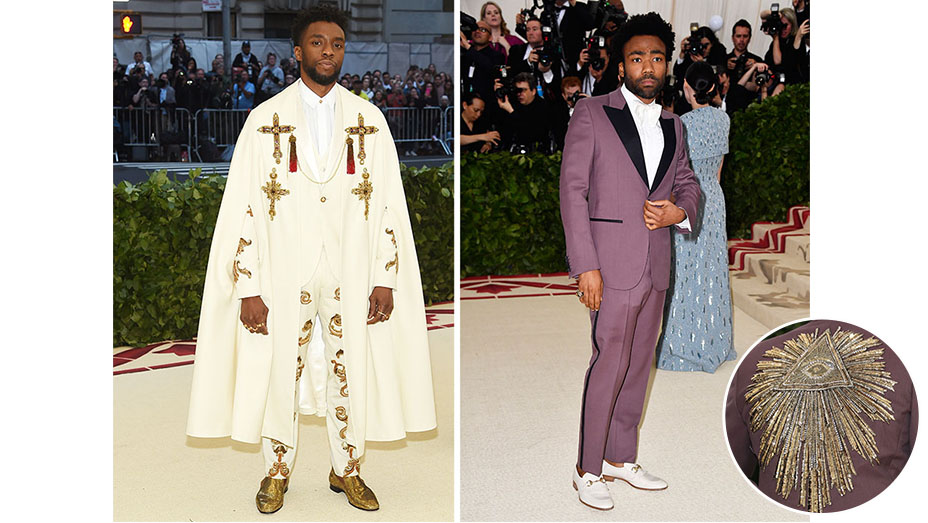 The men were certainly no altar boys; Chadwick Boseman rocked a white Versace suit embroidered with crosses that was part pontifex, part Elvis “The King” Presley, and Donald Glover slid into a lilac Gucci tuxedo with all-seeing eye embroidery, and churchy white loafers, looking like he was ready to take the pulpit and preach “This Is America.” 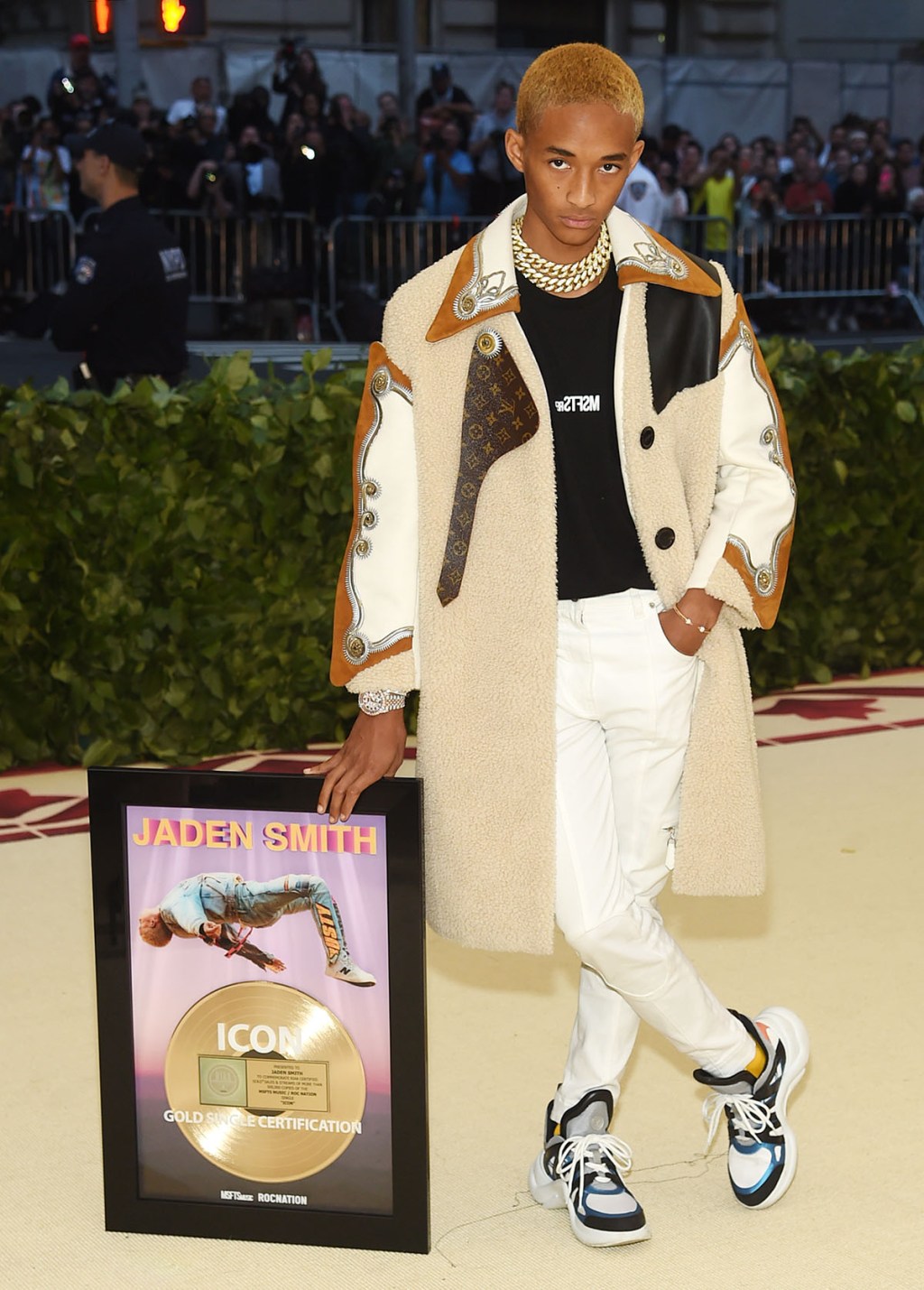 Jared Leto, the patron saint of Gucci, suited up in baby blue with a liturgical stole, a gold crown on his head and Lana del Rey on his arm, wearing a gown with a sacred heart and dagger motif inspired by Our Lady of Sorrows. And, as the standard bearer of his own, just-gotta-be-me style, Jaden Smith once again did not disappoint. After carrying his freshly shorn dreadlocks as an accessory at last year’s Met Gala, this year, he came dressed in Louis Vuitton and carrying the gold-certification plaque for his new hit song, “Icon.”

Guess we know what god he worships.