With less than a month until New York’s most glamorous benefit of the year, organizers of the Metropolitan Museum of Art’s annual Met Gala have given The Hollywood Reporter a first look at the committee for the May 6 event, made up of high-profile names approved by Vogue editor Anna Wintour.

Totaling 183 people, the list is split among stars, designers, philanthropists and a few athletes. But actors comprise the largest group, taking up 48 percent of the list, including Bradley Cooper, Blake Lively and Ryan Reynolds, Chadwick Boseman, Lupita Nyong’o and Jennifer Lopez with fiance Alex Rodriguez.

How important is Hollywood’s presence at this high-wattage fundraiser for the museum’s Costume Institute? “While the committee isn’t reflective of the Met Gala guest list, it’s certainly true that of late there has been a stronger presence of Hollywood names on it,” says Wintour, who is co-chairing the gala with Serena Williams, Lady Gaga, Harry Styles and exhibit sponsor Gucci’s Alessandro Michele. “Obviously it helps that well-known names draw attention to not only the gala but also to the exhibition and to the museum; for all the starriness of the names on that one night, we never lose sight of the fact that the aim of the gala is to raise funds for the Costume Institute, so we can support its place in the cultural life of New York City and beyond.”

Chaired since 1995 by Wintour, the gala draws global media attention on the first Monday in May as guests ascend the Metropolitan Museum of Art steps, often wearing custom looks that suit the Costume Institute’s exhibition theme. This year’s “Camp: Notes on Fashion,” curated by Andrew Bolton and opening May 9, offers maximum potential for theatrics. “I like to say that we go from sun kings to drag queens in the show; it’s to be hoped that there will be plenty of both, not only at the gala but also coming to see the exhibition,” Wintour says.

Bryan Lourd and Ryan Murphy, writer, director and executive producer of the camp-friendly 2017 series Feud, are confirmed as guests, while Cher — who has one of her costumes set for inclusion in the exhibition from her Las Vegas residency at Caesars Palace in 2008 (designed by Bob Mackie, also a Met Gala committee member) — is rumored to be attending. The “Goddess of Pop” first attended the Met Gala with Mackie in 1974 and last walked the event’s red carpet in 2015 with Marc Jacobs.

Tom Ford, Donatella Versace, Miuccia Prada, Valentino’s Pierpaolo Piccioli and Givenchy’s Clare Waight Keller are among the fashion contingent, which represents 32 percent of the 2019 committee. Also on the list are prominent New Yorkers and philanthropists, ranging from Annette de la Renta and Wendi Murdoch to Sean and Alexandra Parker. Among athletes on the committee list, Venus Williams can be found alongside only one other currently active player, Carolina Panthers quarterback Cam Newton. (Nnamdi Asomugha is expected to attend with wife Kerry Washington, but like Rodriguez, is retired.)

Taking its cue from “Notes on Camp,” Susan Sontag’s seminal 1964 essay, the exhibit “Camp: Notes on Fashion” will explore how fashion historically has employed tones of theatricality, humor and exaggeration to create over-the-top designs. The theme, however, has many questioning how to put together their own Met Gala looks, but at least one committee member sounds confident.

“I really want to channel all my foremothers and forefathers from the New York ball scene — they started this,” says committee member Lena Waithe. “It all began with the black queens in inner cities looking for a way to be themselves, and then the culture got co-opted, so I really want to pay tribute to them. I think we might play with color and really lean into the drama.”

Looks in the 200-piece exhibition range from 17th century wardrobe worn at the Court of Versailles to Bjork’s infamous swan dress at the 2001 Academy Awards, to a fur cape and sparkly suit custom-designed for Liberace, who wore the ensemble in the 1980s during his residency at the Las Vegas Hilton. “The surprise for many people is going to be the realization that camp has a long history in fashion,” says Wintour. “We start with the court of Louis XIV at Versailles, then go [from] Oscar Wilde’s Victorian velvet bohemia to 1930s Hollywood to today’s runways, with their feathered and sparkled extravagance, thanks to such visionary designers as John Galliano, Karl Lagerfeld and, of course, Gucci’s Alessandro Michele. That said, the show is very much rooted in the here and now. It arrives at a time when, quite rightly, gender definitions and assumptions are being challenged as part of the progressive urge to forge a far more inclusive idea of the world.” 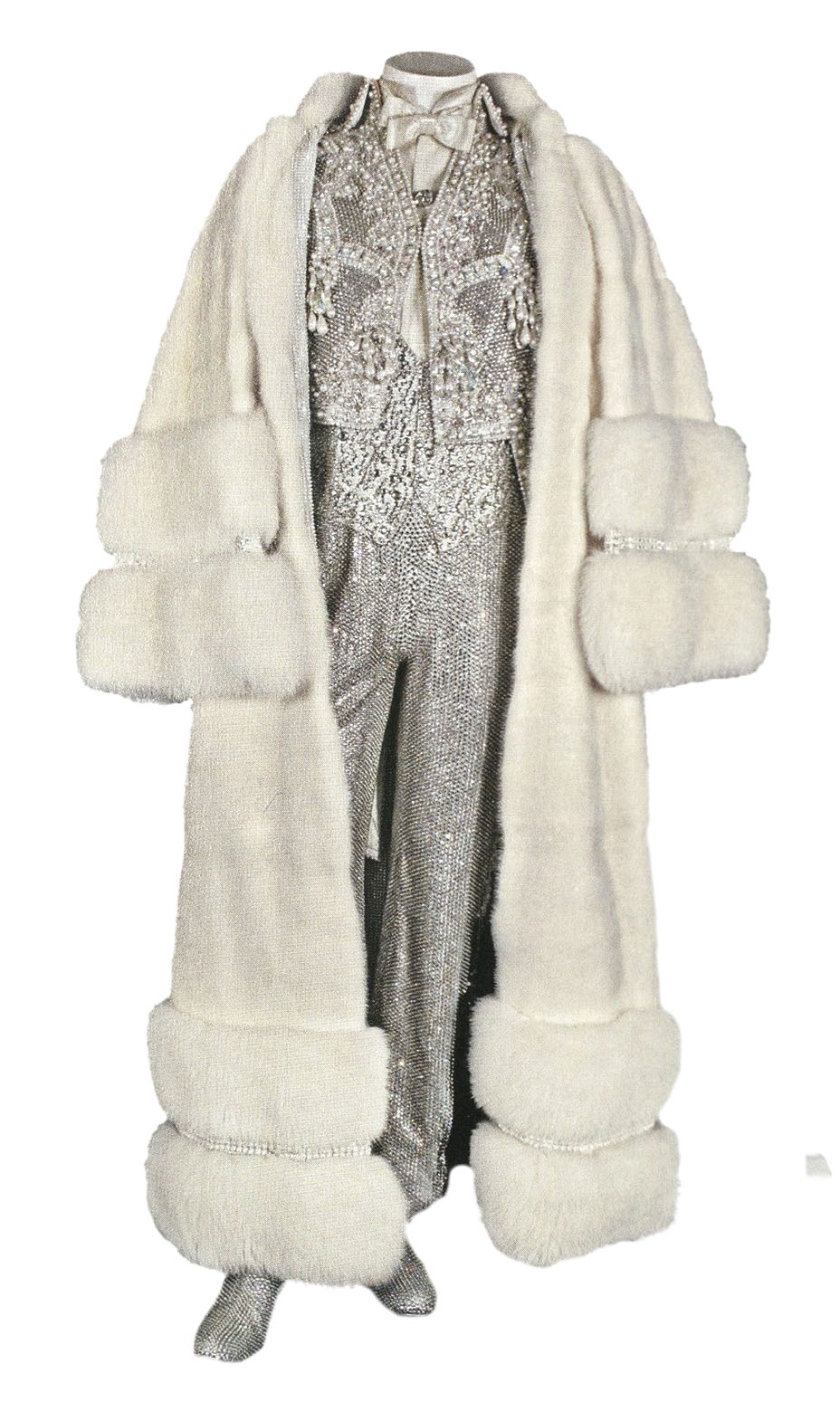 In Sontag’s essay, she pointed to a variety of references as “random examples of camp,” from Tiffany lamps to Flash Gordon comics to the ballet Swan Lake. Asked to name favorite examples of camp, Waithe pointed to the 1995 film To Wong Foo: Thanks for Everything! Julie Newmar — “Wesley Snipes in a dress and a blond wig, you can’t get more camp than that,” she says.

As for Wintour, she says, “[Alessandro] lives his everyday life with the same brilliant and vivid flourishes with which he designs; Lady Gaga imbues each and every gesture and look with a knowing fabulousness; and Baz Luhrmann, who is a constant special advisor to the evening, has given us so many classic moments of cinematic camp, from Strictly Ballroom to Romeo and Juliet to Moulin Rouge.” The Conde Nast creative director adds: “Yet the person I’d most like to single out for giving me my favorite campy pop-cultural moments is Karl Lagerfeld. Some of his Chanel shows were master classes of the genre, from a supermarket full of [Chanel]-branded products to a spaceship taking off from the Grand Palais, complete with Cape Canaveral-style countdown. Karl brought absolute seriousness to humor, and absolute humor to seriousness, and that’s as good a definition of camp as any.”

Last year, more than $13 million was raised for the Institute, which presented the record-breaking “Heavenly Bodies: Fashion and the Catholic Imagination.” At more than 1.6 million attendees, that exhibition set the record for most visitors in the museum’s history. “We were all staggered — and absolutely thrilled — by the numbers,” Wintour says. “Being able to view so many works of art that had never been seen outside of the Vatican before was undoubtedly a huge draw. I’ve always thought the success of ‘Heavenly Bodies: Fashion and the Catholic Imagination’ was due in no small part to the way that the show let us all walk the arcane and mysterious corridors of the Vatican, revealing a powerful and secretive institution known before to only a very few.”