“If you don’t deal with your subconscious, it will deal with you,” cautions Corky, the upwardly mobile California housewife played by Amy Schumer, as she prepares to receive guests from hell in Steve Martin’s Meteor Shower. We witness that warning go unheeded, wreaking havoc on Corky’s painstakingly maintained marriage, before the tables are turned, and predators become prey in the most radical of several variations on the evening’s events. Schumer is one of four terrific performers who juice the entertainment of this high-sheen production, honed to within an inch of its life by Jerry Zaks. But neither director nor cast can disguise the lack of substance in the padded sketch material.

The play arrives on Broadway after premiering in a 2016 co-production that earned mildly favorable reviews first at San Diego’s Old Globe Theatre and subsequently at the Long Wharf in New Haven, Connecticut. It seems safe to assume this fizzy new incarnation — streamlined into a lean one-act that clocks in under 80 minutes — would never have made it this far without Martin’s name behind it, or more crucially, without the marquee draw of Schumer making her Broadway debut. Sales north of $1 million a week in previews suggest it will be critic-proof, much like Larry David’s similarly thin assemblage of zingers, Fish in the Dark, from 2015.

The first draft of Meteor Shower dates back 20 years, and it has the unmistakable feel of a dusted-off bottom-drawer salvage job. Basically it’s a 1960s-’70s-style comedy of marital manners channeled through the Dadaist sensibility of Martin’s early standup routines. It’s fun but feeble; bulging with enjoyable jokes but thematically threadbare. The action takes place in Ojai, California, unfolding over a few hours in 1993 when the most spectacular Perseid meteor shower in recorded history streaked the night sky. But the time seems otherwise irrelevant, beyond the suspicion that it coincides with the breakdown of the playwright’s first marriage.

The template is that of the destructive drinks party, perfected by Edward Albee in Who’s Afraid of Virginia Woolf? Here, however, Martin outlines a get-the-host scenario before proceeding to the more traditional get-the-guests.

Corky and her husband Norm (Jeremy Shamos) banter over a “pre-wine” before welcoming an apparently well-connected Santa Barbara couple, the Newmans, into their tastefully modern home to view the celestial fireworks. The husband, Gerald (Keegan-Michael Key), is a tennis-club acquaintance of Norm’s, while his wife, Laura (Laura Benanti), is a former West Coast editor of Vogue. Even before meeting her, competitive Corky is needled by feelings of jealousy and insecurity, making her hypersensitive to a flippant crack from Norm. That prompts a well-drilled ritual of apology and loving reaffirmation, the result of extensive reading, tapes and seminars in the marital self-help department.

The Newmans are magnificent specimens with intimidating personalities to match. Rangy, handsome and overflowing with masculine confidence, Gerald wears his vintage Hermes belt like a superhero and delivers each polished pearl of wisdom with the stentorian self-infatuation of a veteran stage ham. Laura is a slinky goddess in a strappy gold number that outlines her flawless shape to perfection. Lest anyone fail to notice, she traces her toned figure with both hands as she declines an hors d’oeuvre. She’s also masterful at disguising casual put-downs as compliments, or lobbing insinuations that fuel Corky’s escalating unease, and the guests’ blithe deployment of non-sequiturs throws their hosts even further off-balance. Both Newmans are high on their own power, a state conveyed with purring satisfaction by the hilarious Key and Benanti. 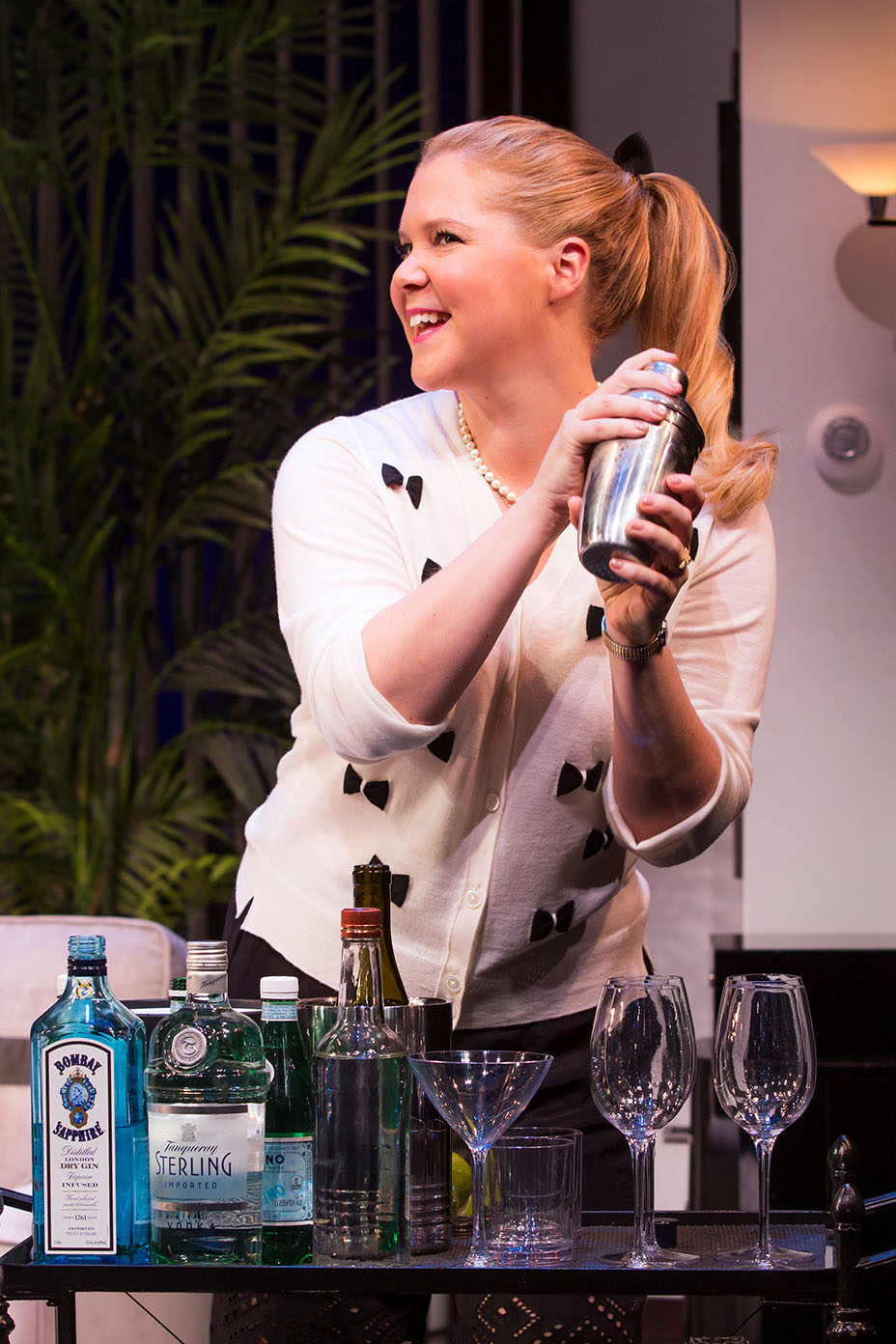 Martin rewinds the action multiple times to start the evening on a different note, before the men amble off into the garden to study the sky and the women get better acquainted on the sofa over drinks. Beowulf Boritt’s clever set spins back and forth between interior and exterior, allowing director Zaks to keep the action humming along at a brisk clip as flirtation turns to swinger-style seduction with a dangerous agenda.

It’s soon revealed that the Newmans have come to conquer and destroy — “Let’s go for total collapse,” says Gerald to his wife with a malevolent grin. Their mission to smash open the fault lines in their hosts’ marriage is aided by a cataclysmic accident that yields amusing sight gags lifted directly from Death Becomes Her. But in another temporal shift, Corky and Norm receive a mysterious warning about their guests’ intentions, allowing them to fortify their defenses and attack first.

No doubt Martin had in mind a cutting commentary on the obstacles faced in keeping a modern marriage together, and the vital importance for a couple of presenting a united front, even against the enemy within. But Meteor Shower is too busy setting up jokes to create the kind of fleshed out characters and relationships necessary to give the comedy real teeth, or to make us fear for the union under siege. Martin’s structural gimmick involving time, and a Fight Club–style twist hinted at in Corky’s earlier warning, seem more like improv-comedy fodder than grist for a full-length play.

While I could have done without the tired gay-panic humor, there are plenty of laughs here — just no credible basis for social or psychological observations that go beyond loopy absurdist parody.

The production’s chief reward is its deluxe cast, whose infectious energy helps fortify the flimsy material. Key, who was a wonderful Horatio opposite Oscar Isaac’s Hamlet early this summer, continues in his Broadway debut to prove himself a gifted stage performer with a magnetic presence. (But really, Ann Roth, can we talk about those baggy corduroy slacks?) Shamos (who replaced Alan Tudyk in rehearsals) can go from sweet mensch to sly manipulator and back with devilish ease. The divine Benanti appears to have reached a point where there’s nothing she can’t do on a stage with consummate skill. And while fans of Schumer’s TV, movie and standup persona might worry at first that she’s somewhat constrained to good behavior by anxious Corky, that just makes it all the more exhilarating when the character downs a few drinks and takes charge, transforming into a slutty kewpie doll with a wicked glint in her eye.

All four actors far outclass their vehicle and should guarantee that sales remain strong for the duration of the limited run.