Moral turpitude? It’s a concept that showbiz talent soon will be well-acquainted with. The term, which means “an act or behavior that gravely violates the sentiment or accepted standard of the community,” is popping up in contracts of actors and filmmakers in the wake of the #MeToo movement that has rocked Hollywood.

Fox is just one of the studios that is trying to insert broad morality clauses into its talent deals, giving it the ability to terminate any contract “if the talent engages in conduct that results in adverse publicity or notoriety or risks bringing the talent into public disrepute, contempt, scandal or ridicule.”

A Paramount source says it long has had standards of conduct that it asks employees and talent to adhere to and that it’s reviewing its approach in the new era. At the same time, several smaller distributors have begun to add a clause in their longform contracts that gives them an out if a key individual in a film — whether during or before the term of the contract — committed or is charged with an act considered under state or federal laws to be a felony or crime of moral turpitude.

Studios and buyers are responding to the real financial losses incurred in the aftermath of a flurry of sexual harassment and assault accusations and admissions that have enveloped everyone from Kevin Spacey to Brett Ratner to Jeremy Piven since October, when Harvey Weinstein first was outed as a predator.

Netflix took a $39 million write-down following numerous assault accusations involving House of Cards‘ Spacey, who also was poised to play Gore Vidal in a movie for the streamer. CFO David Wells didn’t name Spacey or The Ranch star Danny Masterson, who left the Netflix series following rape accusations, but said the write-down was “related to the societal reset around sexual harassment.”

Similarly, All the Money in the World financier Imperative Entertainment had to pony up $10 million to replace Spacey with Christopher Plummer for eleventh-hour reshoots on the Sony film. Spacey did not have a morality clause in his contracts, according to sources, and was paid for the entire final season of House of Cards — even though he won’t appear in any of the episodes — and for All the Money in the World.

Lawyer Schuyler Moore has begun to add a morality clause to contracts in an effort to protect his distributor clients from being saddled with the next #MeToo-tainted film. “Any distributor can say, ‘I’m not picking up this film if somebody involved in the film has some charge like that.’ Absolutely. I’m doing it, and [these clauses] are enforceable,” says the Greenberg Glusker partner. “And it’s just a question of drafting it in a way that works.”

As such, there’s a new version of liability affecting Hollywood, and studios and buyers are scrambling to figure out how to handle it. Naturally, talent reps are balking.

“I’m all for [#MeToo]. I totally support it. But I think [broad morality clauses] create a bad precedent,” says attorney Linda Lichter. “It’s one thing to say someone is a criminal. It’s another thing to say someone has been accused by someone and you can fire them and not pay them.”

Others claim studios and buyers are hypocritical if they are unwilling to include a morality clause covering their own executives. Directors and talent endure economic hardship when their films are bought by a company whose top execs, like Weinstein, become synonymous with sexual ignominy. Adds a top agent: “It’s too far reaching legally. And it should cut both ways as buyers have culpability as well.”

But distributors, all of whom declined to be named for competitive reasons, say their hands are being forced by their ancillary partners including cable providers and pay-TV networks who now are including morality clauses in their long-form contracts.

On the flip side, Fox Searchlight lost millions on the release of The Birth of a Nation after revelations that star-filmmaker Nate Parker had stood trial for rape when he was a college student (Parker was acquitted) and that his accuser later took her own life.

In the post-Weinstein landscape, a number of distributors have been left in vulnerable positions. YouTube Red dropped Morgan Spurlock’s Super Size Me 2: Holy Chicken! following the filmmaker’s admission of sexual misconduct, but not before paying $3.5 million that sources say it likely won’t get back. The Orchard dodged a bullet when its $5 million acquisition of Louis C.K.’s I Love You, Daddy became unreleasable after a wave of harassment accusations were leveled at the comedian. Though C.K. was not legally obliged to take back the film, he wrote The Orchard a check to reimburse the company for what it had paid toward the film’s release.

“Everyone is trying to cover their asses as much as possible,” says one distribution exec whose company recently began adding morality clauses to its contracts.

One producer insists that restrictive clauses will spark an inability to finance movies. “If there is anything downstream that impedes the ability of a financier to recoup his investment, the financier will not invest,” says this producer, adding that bond companies do not currently address the potential of a key figure negatively impacting a film because of a sex scandal. Film Finances Inc., the top bond completion company working in Hollywood, declined to comment.

“There’s definitely an opportunity for a company to come up with some sort of sex abuse insurance,” says the producer. That’s a point echoed by Lichter. “The studios should start thinking about whether there’s some kind of insurance for this type of thing,” she says. “This is a whole new territory.” 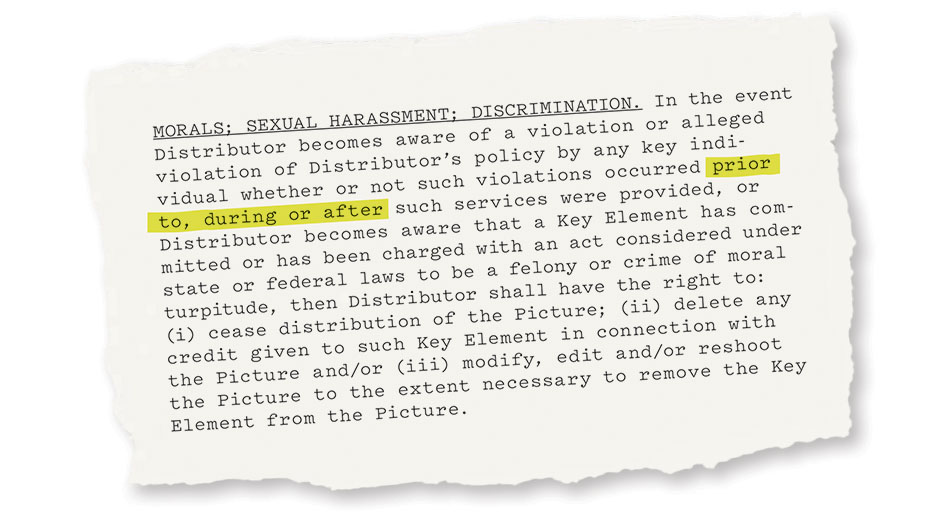 Lacey Rose contributed to this report.

A version of this story first appeared in the Feb. 7 issue of The Hollywood Reporter magazine. To receive the magazine, click here to subscribe.

Netflix, Amazon Look Past Sundance for Their Own Blockbusters