Five nights before the Oscars, George W. Bush began his carpet-bombing of Baghdad and invasion. That was on Wednesday. By Thursday, there was talk of canceling or shortening the Oscars (by dumping categories like feature documentary). On Friday it was decided to do the show and keep documentaries in the program.

It was a very tense night in the Kodak Theatre. It came time in the program for our category and Diane Lane walked onstage to announce the five documentary nominees. She opened the envelope and said, “Bowling for Columbine … Michael Moore!”

On the way up the aisle, because I hadn’t prepared anything, there were two voices in my head, sort of like the character in Lord of the Rings who’s both Smeagol and Gollum.

One voice was going, “You must be nice! Oscar — precious! Thank your agent and the person who gave you this tuxedo and get off the stage!”

And the other voice went, “No! No! There’s a war going on! You must say something. Millions are watching! Oscar — bad!”

When I finally got to the podium I just decided to give the same speech I’d given the day before at the Spirit Awards. It was a hit on the beach in Santa Monica. I talked about making nonfiction films while we lived in fictitious times, with a president elected with fictitious results. I had gotten a standing ovation in Santa Monica.

The Kodak Theatre is not the beach in Santa Monica with an audience full of tattoos. As soon as I said “fictitious times” and the “fictitious election results,” there was a cacophony of sound, primarily boos.

I could barely hear myself speak. It was like I had ignited a riot. They struck up the band on me and the microphone started to lower to the stage.

I was hustled off into the wings, pretty dazed. The Academy had two interns standing there as they do for all Oscar winners: a boy in a tuxedo and a girl in a nice evening gown. The boy said, “Champagne?” And he was holding a flute with champagne. The girl said, “Breath mint?” And she was literally holding a breath mint.

All of a sudden stagehands were coming at me. Security quickly surrounded me to protect me. One stagehand broke through and went right up in my ear and shouted, “Asshole!”

So on my Oscar night, the first four words I heard after I won were “champagne,” “breath mint” and “asshole.”

At that point, the two security guards on each side of me took me, locking my arms and whisked me away. I was literally being carried out of there because of the potential violence that was beginning to occur.

Then somebody said, “I can’t believe you mentioned Bush.” 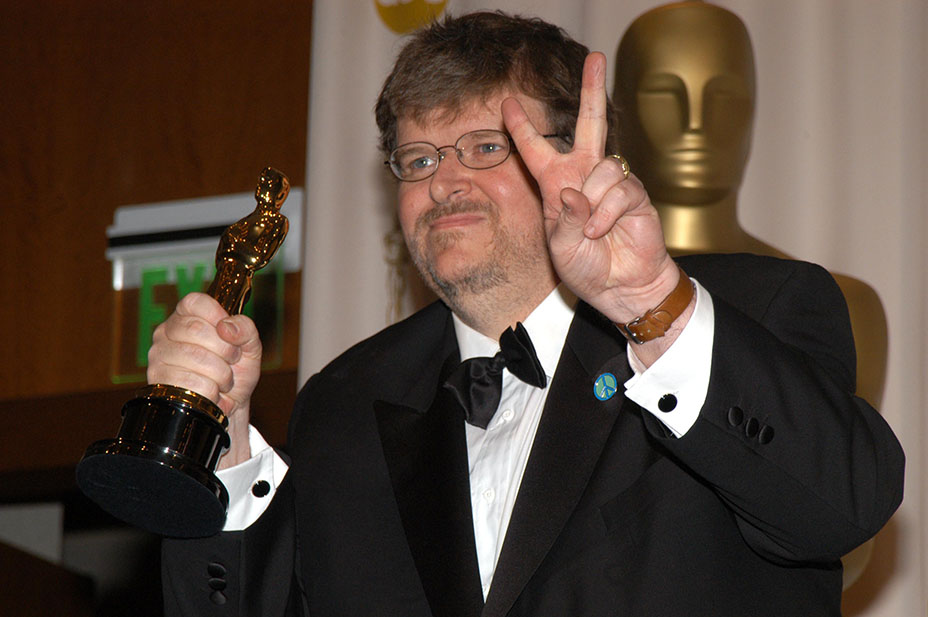 Later, my wife and I walked over to the Governors Ball. When I walked in, it was like the Red Sea parting. No one there wanted to be anywhere near the guy who got booed off the stage. One board member told me, “Wow, you really know how to ruin a standing ovation.”

As we were standing there, Sherry Lansing saw us being shunned. And she walked right up the middle aisle through the tables and very publicly came up and hugged me and gave me a big kiss on the cheek. I’ll never forget that because it was a very lonely feeling in there.

I went back to the hotel room and turned on the TV. On show after show, people were pontificating about what I did. And more than one commentator said something to this effect: “That’s the end of Michael Moore!” “He won’t be making any films soon!” “What was he thinking?!” I should not have been watching that. I turned the TV off and just sat there. I believed that was it, I was over.

When we got back to Michigan, a group of men had tacked signs up on our trees saying “Commie,” “Get out of here,” “Move to Cuba.” They had piled a wall of horse manure about 4 feet high across the driveway. And then all the threats started and I had to hire security. Over the next two years I was assaulted a half-dozen times.

Two years later, I was on Jay Leno as a guest. After the show ended, I got up off the couch to leave the stage and this guy came up to me — he had been operating the boom mic. He said, “You know I never thought I’d get to see you again, I’m just so honored to be able have this moment.” And he started to shake a little bit and then tears came to his eyes.

He said: “I’m the guy who ruined your Oscar night.”

He says: “I’m the stage hand who came up and yelled ‘Asshole!’ right into your eardrum. And now it turns out you were right, there were no weapons of mass destruction, the war is a lie. And I have felt so guilty about this since I realized that we’ve been lied to for the past year or so here.”

I put my arms around him and gave him a hug and I said, “Look, you have nothing to apologize for, you didn’t do anything wrong. You believed your president. You should be able to believe the president. You don’t need to apologize.”

He said, “No I have to. Please accept my apology.”

When they say 1 billion people watch the Oscars, I learned how true that statement is. People would later remember I’m “that guy who told the truth.” People in other countries saw that night that not all Americans were behind George W. Bush. Not all Americans supported the invasion of Iraq.

The next week I went to work on my next film, Fahrenheit 9/11. I was not over. And I got some very nice swag bags.