Continue to The Hollywood Reporter SKIP AD
You will be redirected back to your article in seconds
Skip to main content
November 14, 2017 7:11am

Nobody would say the Trump White House is consistent or focused or?especially working its left hand and right hand in concert. But if you’d bothered to ask, it was always clear that the proposed merger of AT&T and Time Warner was broadly unpopular in the Trump administration. In July, the last time I inquired, a member of the senior staff told me, in no uncertain terms, “Bet against it.”

As a candidate, Donald Trump had publicly dissed the deal. It was a juicy, bash-big-business target; opposing it was in line with the administration’s anti-media agenda; and Time Warner’s CNN was, of course, ever stuck in the president’s craw. How could this be misunderstood?

Still, in the Trump maelstrom, nobody would say it was top of mind, either. And that seemed good enough for AT&T CEO Randall Stephenson and Time Warner chief Jeff Bewkes to believe, in quite some ostrich fashion, that they would win approval for the deal.

Even when directly told that the White House didn’t like it, and that senior Trump officials were saying it was going down, AT&T put its fingers in its collective ears.

I know this because, when I wrote about the deal in this space last spring, I told AT&T’s general?counsel, David McAtee, who was leading the regulatory charge, that high-ranking Trumpers, whom I was also speaking to, were saying no damn way. He could not have seemed in a deeper, la-di-da denial.

The AT&T position in this politically fraught time was that its $85.4?billion deal to create a?$245?billion distribution and content company had nothing to do with politics. It was merely dealing with a procedural?matter involving antitrust law. And, on that count, since AT&T and Time Warner were in different?businesses — one a provider of broadband and telecommunications services, and the other an entertainment and media company — there was no conflict.?Period.

After almost a year of review,?everybody seemed suddenly gobsmacked Nov. 8 that the Justice Department had serious reservations about?the merger, and that, to get it done, it would likely require significant?divestitures. This might include CNN, all of Turner Broadcasting or AT&T’s satellite television system, DirecTV. Stephenson responded by saying,?wounded animal-like, not over his dead body. This unexpected (for AT&T) turn of events was blamed on Trump interference and perhaps?malfeasance — the president was meddling with the Justice Department!

But before getting to the possibility of Trump’s reckless or unmindful behavior, there is, as well, AT&T’s particular heedlessness to consider. AT&T has been lucky that?the world’s attention has been elsewhere than on this mega-deal because, from the start, there has been lots of snickering in media circles if not outright ROTFL about the quite outlandish presumption that the Dallas-based pipes and infrastructure company could run a New York- and Hollywood-based entertainment company.

This was compounded by an announcement in July that Time Warner would be?directly run by AT&T executives, foreshadowing a sweeping housecleaning. Indeed, Time Warner executives have noted with quite some bemusement that they have been cleanly cut out of deal matters and transition planning: Their rich deal is underwritten by AT&T’s arrogance. That’s the hubris here; AT&T already sees the epoch of a monopoly-like telecommunications takeover of the media industry as total —and a fait accompli.

Part of this hubris is its disregard of the Trump administration as a factor in the fate of the deal — a confident belief that Trump’s own divided allegiance between populism and the business would work in its favor. The thinking had been that if the Trump administration really wanted to block the merger,?this would have more likely happened through the Federal Communications Commission. Unlike the Justice Department, which needs to build an evidentiary case for antitrust funding, the FCC might block the deal if it merely found that the combination was not in the “public interest.”

That would have been the more obvious political move — the place where Trump could have easily put his thumb on the scale.

The Justice Department, by contrast, seemed like a safe space for AT&T. The notion that the Trump DOJ would want to expand the view of antitrust regulation and get into a legal and philosophic debate on the issue gave the Trump administration more credit than anyone would reasonably give it. And yet, to assume that there wasn’t a debate, as AT&T’s McAtee affably insisted, was surely wishful thinking.

Tim Wu, the telecommunications lawyer instrumental in blocking Comcast’s merger with Time Warner Cable (now called Spectrum) in 2015, succinctly summed up the antitrust case against AT&T and Time Warner in a recent op-ed in The New York Times: The companies might be in separate businesses, but together they gained leverage allowing them to unfairly compete against other delivery-content companies (i.e., Verizon).

Of course, this being Trump, it is not at all impossible that he did put his thumb where it doesn’t belong (of note: Trump’s directly influencing the Justice Department may be Trumpian but is not necessarily illegal). Or that Attorney General Jeff Sessions’ DOJ would just seek, unbidden, to give him what he wants. The stranger thing is that AT&T seems to have regarded none of this as likely or even possible. It seemed caught wholly unaware by the fact that?a plate-moving event in the media industry, as key to Trump’s fortunes as party politics itself, might get special scrutiny. This then might fairly and crucially pinpoint the key problem with the deal: the Dallas company’s inability to understand the nature of the business it is proposing to enter — the attention it commands and the forces it inevitably unleashes.

Take Rupert Murdoch. As another sign that media is not like other businesses — the tough-love lesson that AT&T is now learning a bit too late — it transpired recently that Murdoch, who has been aggrieved by the merger (not least of all because he attempted to buy Time Warner in 2014 and failed), has been suggesting he ought to buy CNN. This is a particular kind of Murdoch troublemaking. Obviously, Trump’s heartbeat will quicken by the thought of his nemesis, CNN, being owned by his faithful followers at Fox. And while Murdoch’s ownership is unlikely (during his bid for Time Warner, he promised to sell CNN), it nevertheless highlights the stakes and drama of the deal: The knives are always out.

Media is a game of emotions and politics and troublemakers, which, a dumb pipes company like AT&T is, not surprisingly, far from ready to play. 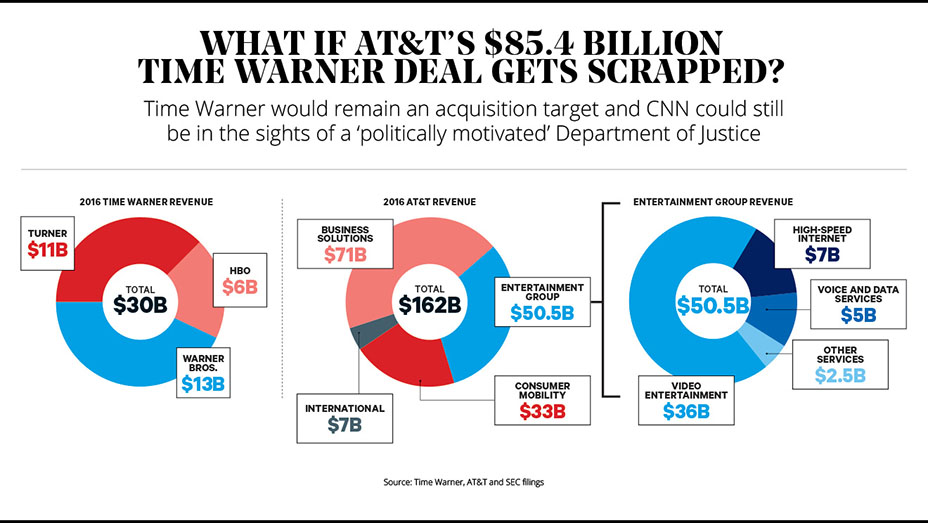