Last July, after Gretchen Carlson sued the Murdoch-controlled 21st Century Fox and Roger Ailes, the then-head of Fox News Channel, for sexual harassment, Rupert Murdoch told his sons, both Ailes enemies, that paying off Carlson without a fight would mean more lawsuits. Easy-money settlements always bring more claims. James and Lachlan Murdoch, however, were eager to get rid of their nemesis, and the most direct way to do that was to accept Carlson’s claims after a quickie investigation and then use a big payoff — $20 million — to end the dispute and calm the storm.

Nine months later, the chickens coming home to roost, Fox has continued to collect a string of look-alike claims against Ailes and against ratings giant Bill O’Reilly, with a firestorm of recent press attention on what The New York Times is calling the “O’Reilly revelations.” What has been revealed is not evidence nor an admission of guilt but details of payments settling complaints against O’Reilly — not a small distinction. You can assume maximal guilt, which the Times and other Fox haters do, or you can assume, as many lawyers do, that when there is money to be had, plaintiffs come out of the woodwork. (“Coming out of the woodwork” is a virtual term of art in big settlement tort cases).

Murdoch Senior is said to be saying, “I told you so.” James, CEO of 21st Century Fox, is blaming it on the Fox News culture and has hired Paul Weiss, the same law firm that performed a two-week investigation of Ailes, to probe O’Reilly (there is, too, a Department of Justice investigation of how settlement payments were made, which Rupert dismisses as DOJ liberal politics and which his sons see as indicating more Fox News dark arts). This is a reflection of greater family and company interests and conflicts. For 86-year-old Rupert, Fox News is a key part of his legacy, as well as the family company’s health: the most profitable news outlet ever ($1.5 billion in profits this year) and among the most influential. For James, 44, and Lachlan, 45, the hope is to reshape this legacy, to move Fox away from what they see as its retro, Trump-style views toward, well, something nicer (and to do this profitably, they hope, somehow).

The Murdoch interests have, however, now been joined — with Murdoch Senior arguing it’s his sons’ own damned fault — to the flashpoint issue of sexual harassment. And while they could rationalize losing Ailes because Fox News, even without him, remains powerful, it would be harder to rationalize a loss of O’Reilly, who, at 8 p.m., is the most-watched host on cable and supports the entire evening schedule.

It’s a particular sort of irony that Fox, which, to the delight of its audience, built itself on rejecting liberal assumptions, might now be brought down by such a signature liberal assumption: Where there are charges of sexual harassment, there is sexual harassment. It’s a kind of zeitgeist power play. After President Trump went out of his way to support O’Reilly on April 5, The New York Times, which left little doubt that it accepted the truth of the allegations, noted “the president has a particular rapport with Mr. O’Reilly, whose hectoring braggadocio and no-apologies nostalgia for a bygone American era mirror Mr. Trump’s own.” 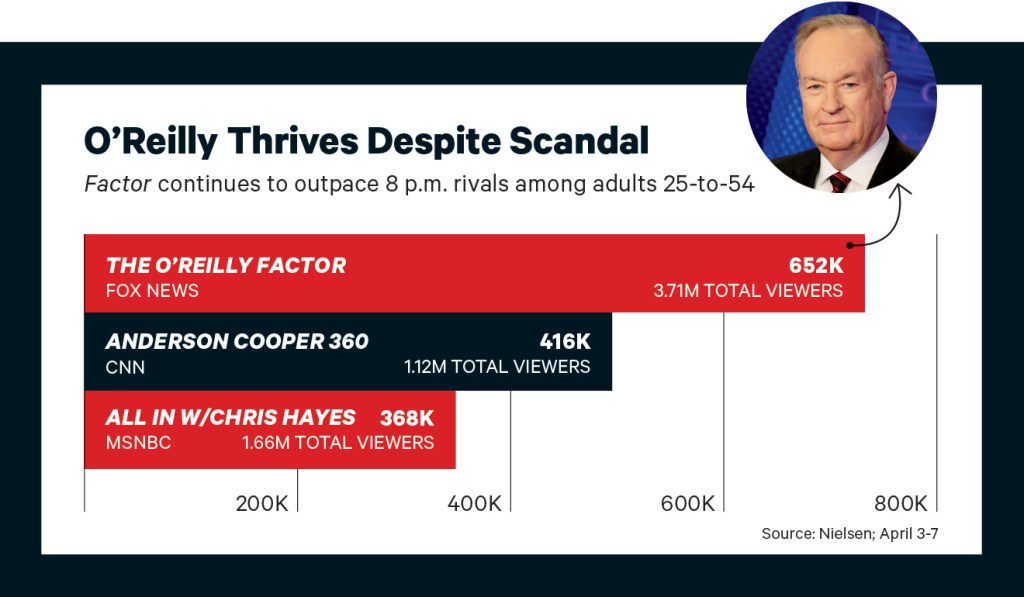 This is a curious view considering Trump won the presidency, and O’Reilly is the highest-rated cable news host and, to boot, one of the best-selling authors in the country. So, more accurately, it may only be a bygone era for The New York Times and the liberal order that so furiously opposes and links Trump and Fox. But the cultural upper hand is a mighty one — and sexual harassment has become an issue so fraught, it largely precludes debate. Hence, advertisers are now fleeing O’Reilly — seeming to make a moral judgment, but, practically speaking, just avoiding controversy (few, if any, have left the network entirely).

Your narrative is your fate. It doesn’t matter if O’Reilly or Ailes did or didn’t do the things they are accused of — no trial has occurred, no evidence has been released, no investigators’ conclusions shared — their real guilt is that people believe they could have.

Confusing matters, the Murdoch sons also see O’Reilly and Ailes as part of a bygone era — their father’s. Pay no attention that it was precisely this sensibility that has been such a powerful audience draw at Fox. (Of note, to the lasting outrage and confusion of liberals, Trump, despite the bygone era suggested by his Billy Bush “pussygate” tape, was elected anyway.) The Murdoch sons, while in important ways financially supported by the profitable, culturally backward views at Fox, see their job as taking the company into a new era.

The sons’ plan was to make Fox the network of Megyn Kelly rather than of Ailes and O’Reilly. That plan foundered on widespread resentment at the network toward Kelly for her part in Ailes’ ouster and on the election of Trump. Suddenly, Fox’s “when America was great and men were men” appeal was even stronger.

One solution has been Tucker Carlson, a conservative but less of a dour, bygone-era one, who has scored significant ratings at 9 p.m. But an important aspect of those ratings is that he is firmly sandwiched between O’Reilly and Sean Hannity. Both retro men are, even beyond their huge salaries (nearly $20 million a year for O’Reilly; $14 million for Hannity), vastly rich — O’Reilly, 67, from books; Hannity, 55, from radio and real estate — with dedicated audiences who’d likely follow them wherever. The worry at Fox is that they need Fox less than Fox needs them, and they might soon leave too.

The liberal hope is that media pressure will continue to force advertisers to reject O’Reilly (no matter that liberals have frequently been aghast when conservatives have urged advertiser boycotts of liberal media). But, in fact, so far advertisers have merely moved to other Fox shows, which depend on the O’Reilly spillover audience. If O’Reilly, who is on a pre-planned vacation, returns April 24 and the ratings remain strong, those advertisers likely will be back on his show.

Murdoch Senior has remained largely remote from this dispute, but he reportedly has been paying attention again. He is said to be worried that his sons are moving toward a radical break — “re-imagining Fox,” is what James is said to call it — and hastening the end of an era that, in television terms, so far has been more popular and unyielding than any cozier new one.

Bill O'Reilly to Go on Vacation Amid Sexual Harassment Controversy