One Donald Trump consequence, even a silver lining, is that the conquest of the world by the great technology platforms of Silicon Valley and elsewhere seems suddenly checked. Or, at least next to Trump, the tech community no longer is the great disrupter.

This might be because the Trump version of authoritarianism is now greater than the tech version of it, dominating the news in a way that makes even the technological transformation of, practically speaking, everything, at best a side story. But it’s also because the tech moguls made and lost a one-side political bet. As much as the media (now having its own existential moment), tech went all in for Hillary. An industry whose main proposition was that it knew how to create the future hopelessly misjudged it — and, to boot, saddled its communications and public policy teams with now-irrelevant Clinton partisans and retainers.

It is hard to express how little interest Trump and his people have in the digital revolution and how unimpressed they are by it — and even unaware of it. Making America great again harkens for Trumpers to a pre-tech world. Many of the jobs the president has pledged to restore are jobs largely taken by tech. Technology, the current standard among cosmopolitans for American greatness, is the global business most at odds with Trump’s America-first view. Steve Bannon, the president’s chief strategist and internal rabble-rouser, regularly briefs against tech “companies with a $9 billion market cap employing nine people.”

Digital Stocks Steady Amid Rancor Between Trump and Silicon Valley

The business council organized for Trump by Blackstone chief Steven Schwartzman includes none of the major tech platforms. Only Peter Thiel and Elon Musk, both tech outliers or at least notable individualists, now represent the industry. Uber CEO Travis Kalanick publicly resigned from the council Feb. 2 over the president’s immigration policies, and on Feb. 16 Facebook’s Mark Zuckerberg personally took the president to task in a long post challenging Trump-era isolationism and defending the global world view.

The obeisance and loyalty that Trump values, or requires, are unlikely to come from the technology community — which joined, almost to a company, in an amicus brief supporting the suit against the Trump immigration orders. On Feb. 6, various major tech companies, including Apple and Google’s parent, Alphabet, leaked the draft of a letter condemning the president.

While this is a forceful PR assault against someone the tech community and, presumably, many of its customers and employees see as an unpopular president, it may also indicate a uniquely dangerous moment for Google, Facebook, Apple, Amazon, Snapchat (with its approaching public offering), Twitter, et al. — indeed, the danger may increase as customers and employees demand that companies swear ever-more anti-Trump oaths. Is this finally the opportunity for disrupted industries to strike back at tech hegemony and inevitability?

Certainly an aspect of tech’s imperial expansion during the past eight years — including the rise of social media and video platforms — comes from the boosterism of the Obama administration and a president happily in the tech pocket. (Tech has been the choice post-administration job for ranking Obama-ites.) Now, in its first weeks in office, the Trump administration has moved to begin dismantling the FTC’s net neutrality rules, one of the key pillars of the Obama administration’s tech support. (Important parts of the tech industry backed Joshua Wright, with deep ties to Google, as FCC chairman, but Trump elevated sitting commissioner Ajit Pai, a reliable conservative and tech skeptic.)

It is not just the Trump troglodytes but all of the industries that have been disrupted by tech — and not just by technology itself but by governmental policies favoring tech — that suddenly have a revanchist’s chance.

Rupert Murdoch — a never-Trumper who has worked his way back into the new president’s graces — now regularly lobbies Trump against AT&T and Time Warner’s tie-up, urging the president to move review of the deal from the Justice Department’s antitrust division, with its high hurdles to blocking a deal, to the FCC, which needs only to find the deal not in the public interest in order to block it. 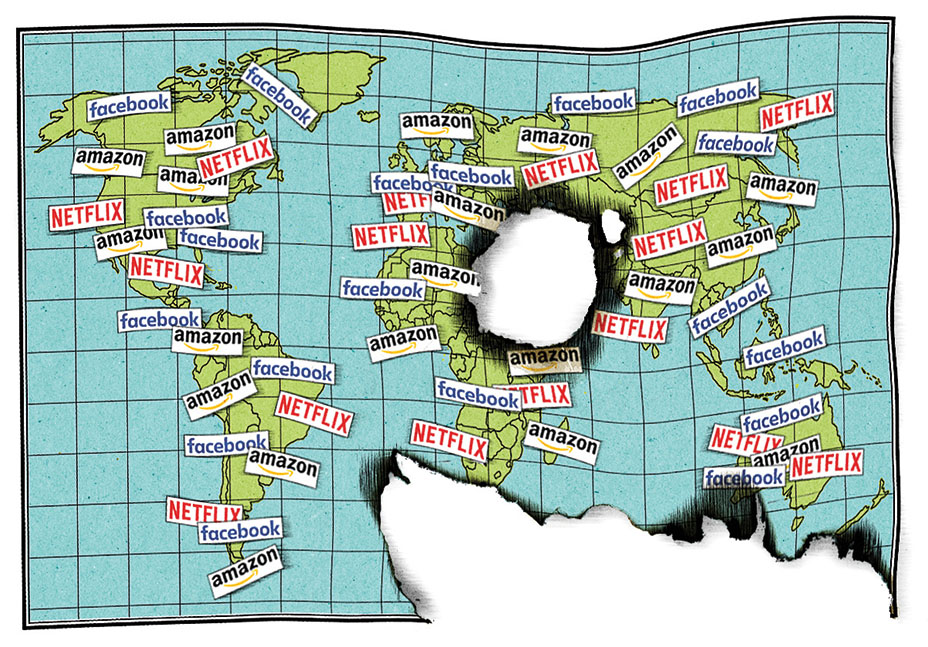 It is curiously the “dishonest media” that might benefit most from the Trump effect — both from the president’s indifference or even hostility to tech and from the backlash against Trump himself. The anti-media president could well end up as the best thing that has happened to media companies in a long time.

In this view, tech may be caught between an increasingly unfamiliar world in Washington wholly dominated by the Republican Party — which owes nothing to the tech industry — and rising liberal outrage over fake news and social media bigotry. While conservatives might ordinarily be counted on to help protect monopoly industries, the Google/Facebook duopoly is considered to be a Democratic stronghold. At the same time, many liberals, now apportioning blame to social media for the Trump victory, suddenly seem to be seeing it as a Frankenstein creation.

This moment of tech unpopularity occurs as the media world realizes it is fast approaching a final shootout. For any digital business based on advertising, the chances of snatching a meaningful part of ad revenue and customer information from Google and Facebook, which now hold as much as 70 percent of the digital market, are shrinking.

Ironically, given the media’s near-universal anti-Trump views, the Trump administration may present the last chance to level the playing field.

Murdoch himself, who long has dreamed of taking on the tech platforms — regarding them as unfairly benefiting from a functional theft of media content — is said to see this as an opportunistic moment for limiting tech privilege and for the content industry to organize against it.

Likewise, in a media industry with no love lost for the new president, many people happily note that Netflix CEO Reed Hastings perhaps has been the executive most upfront and unfiltered about his fear and loathing of Donald Trump.

Hastings, says a major media CEO, is “one tweet away from a 30 percent share drop, one net neutrality ruling away from oblivion.”