Continue to The Hollywood Reporter SKIP AD
You will be redirected back to your article in seconds
Skip to main content
April 28, 2017 11:43am

The former first lady made her first public appearance since she and Barack Obama left the White House in January, stepping out at the American Institute of Architects annual conference Thursday in a black and tan calf-length dress by New York-based label Lafayette 148.

During her appearance in Orlando, Obama reiterated that no, she will not be running for office (“I wouldn’t ask my children to do this again because, when you run for higher office, it’s not just you, it’s your whole family,” she said), and that she will continue her work on two causes near and dear to her heart: ending childhood obesity and promoting education.

Like many of her fashion choices in the past, Obama’s decision to rock a dress by Lafayette 148 may have been a subtle message, as the brand also works to promote education. Founded in 1996, the company is involved with two education-based philanthropic endeavors: The School of Dreams, which was launched by Lafayette 148 founder Shun Yen Siu in 2007 in his hometown of Shantou, China, to give underprivileged children an equal opportunity to attend public school, and the Promise Project, a New York organization that helps children with learning disabilities from disadvantaged families obtain an education. The brand also works on partnerships with Manhattan’s Fashion Institute of Technology and makes annual donations to the school.

The former first lady made a habit of researching the brands she chose to wear during her time in the White House, often choosing designers who stood for a cause she believed in. Her choice to wear a Christian Siriano dress while speaking at the DNC last summer, for example, followed the designer’s vocal lobbying for inclusion and diversity in fashion. She was also known to support emerging American designers, and, when hosting foreign leaders at the White House, would often wear a creation from a designer of that leader’s country.

Obama’s dress is still available for purchase at Nordstrom for $548. 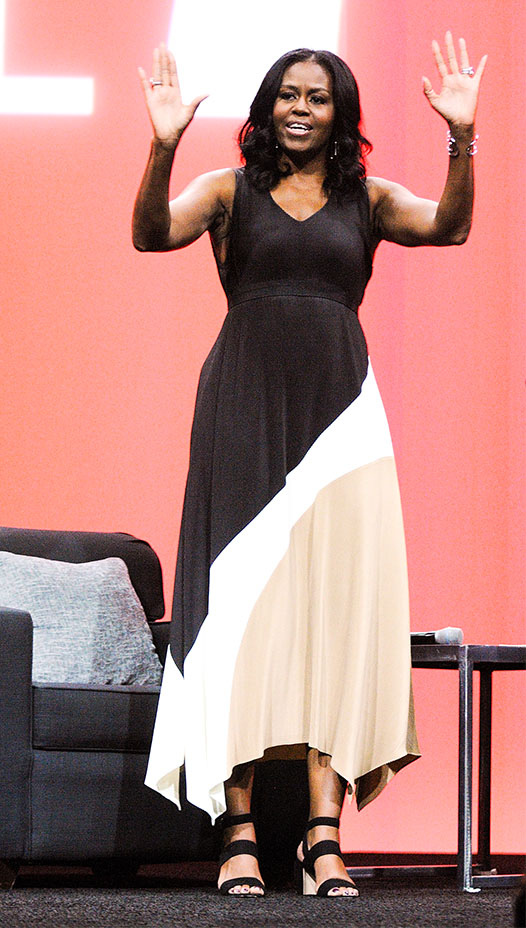