When it’s early on a Sunday, an Arctic breeze has blown a snow flurry from the north, and you’re heading into another long day of shows, it’s easy to forget that fashion is fun. But faith was restored by a string of fabulous fashion moments capping off Milan Fashion Week, from high-tech drones modeling the newest handbags at Dolce & Gabbana, to a playful-primitive set and collection at Marni; Milan hometown spirit at MSGM, to American spirit at Tommy Hilfiger’s Gigi Hadid-starring speedway spectacular.

Dolce & Gabbana Gives Models a Run for Their Money

For a fashion buzz (and photo-op), it was hard to top Dolce & Gabbana’s newest models, a half-dozen drones flying out onto the runway with the latest Dolce & Gabbana “Devotion” quilted handbags.

Oscars: The Best Dressed Men, From Timothee Chalamet to Andrew Garfield, Were Anything But Basic 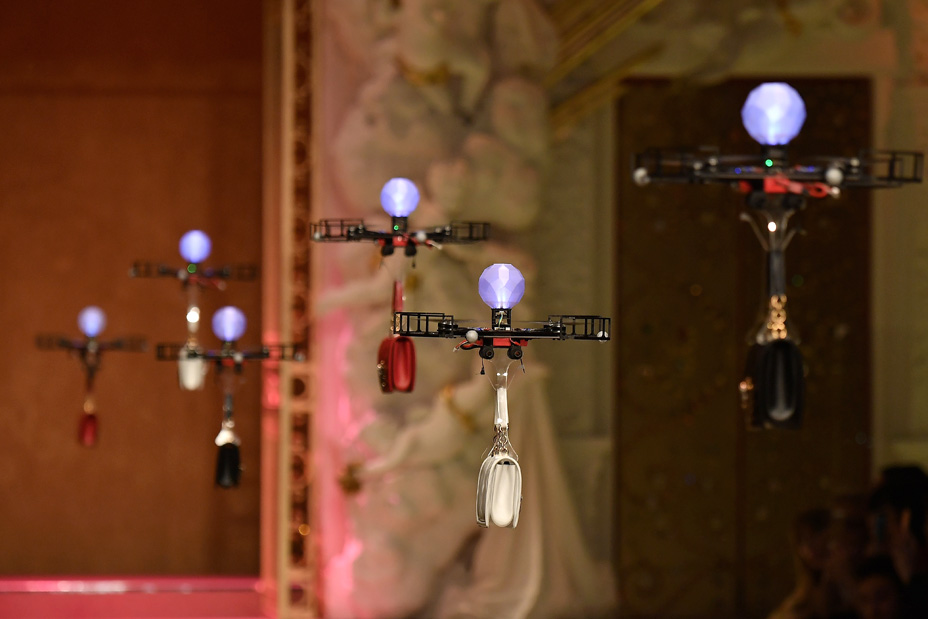 The surprise involved coaxing the entire theater full of guests to disable the WiFi on their phones. (This request coming from the first designers to make a show of seating social media influencers in their front row, and creating a #DGMillennials hashtag and ad campaign around it.)

But it was worth the excruciating 45 minutes to see these true next gen stars: the #DGDrones, let’s call them. Naturally, social media lit up as soon as the footage was posted post-show. “The latest in setting unrealistic body standards,” a commenter joked on my Twitter feed. “Those drones won’t get out of bed for less than $10,000 a day,” another quipped. Should Gigi be worried? Nah, they were all wings. 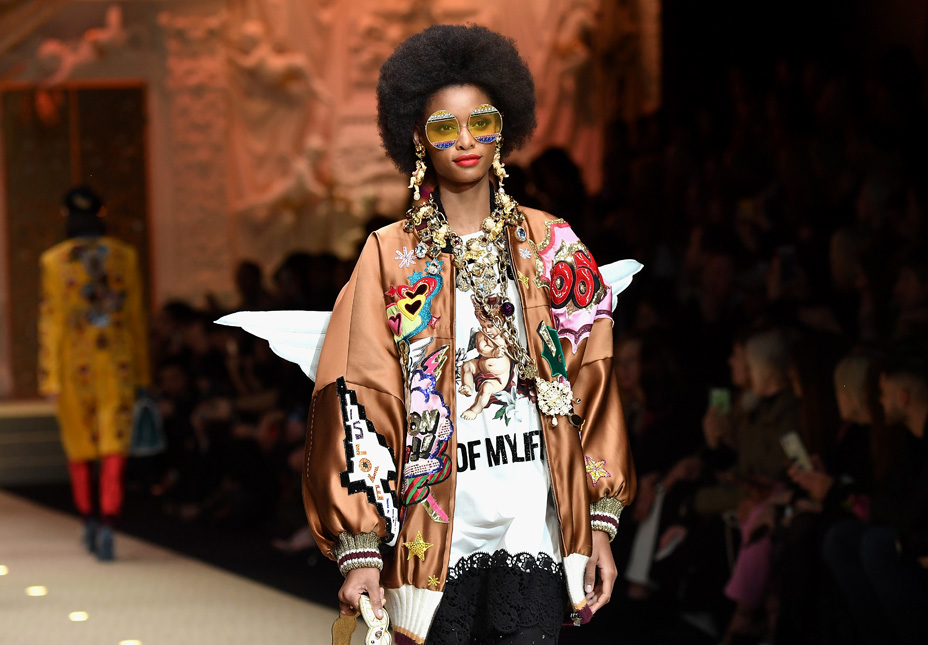 After the drones left us, the rest of the show was about putting a next gen take on the brand’s perennial religious theme, starting with the “Fashion Sinner” opening statement tee. 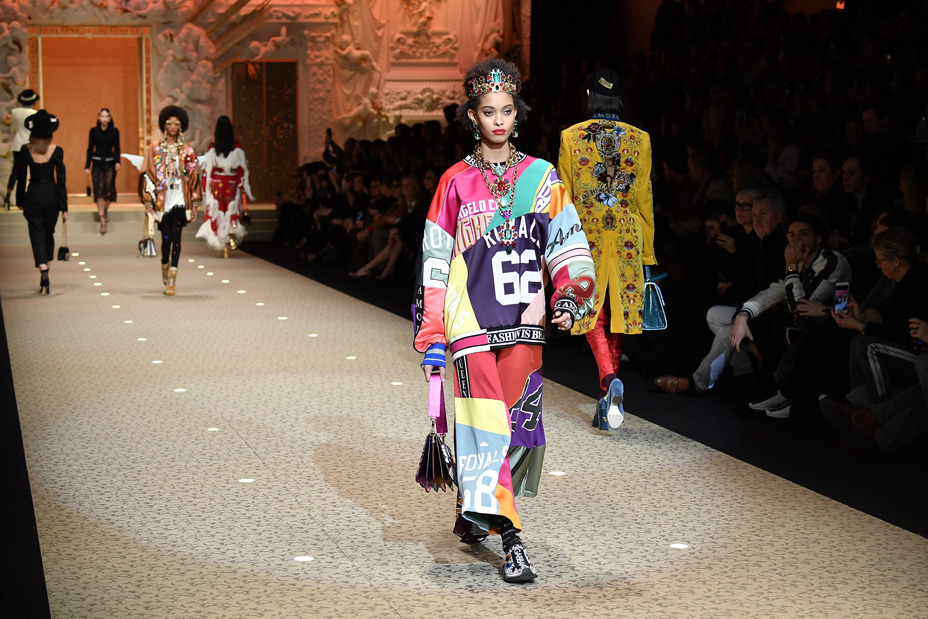 The clothes were as OTT as we’ve come to expect from the these showmen, with a Duomo’s worth of beaded crosses, gilded brocade, angels, virgins and cherubs (some of them doppelgangers for Dolce and Gabbana themselves). 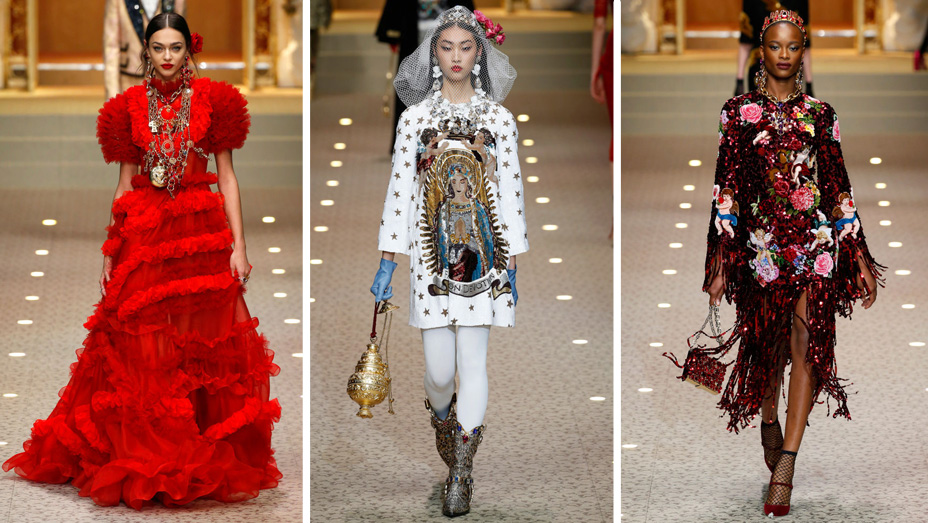 In addition to the season’s de riguer streetwear-inspired track pants, varsity jackets, T-shirts and sneakers, there were also some very pretty dresses, including a red showstopper resplendent in ruffles, and others embroidered with sequins and cherubs that would seem destined for the “Heavenly Bodies” themed Met Gala. Cheeky finishing touches included handbags resembling a retablo or a priest’s incense-burning thurible. Fashion sinners, indeed. 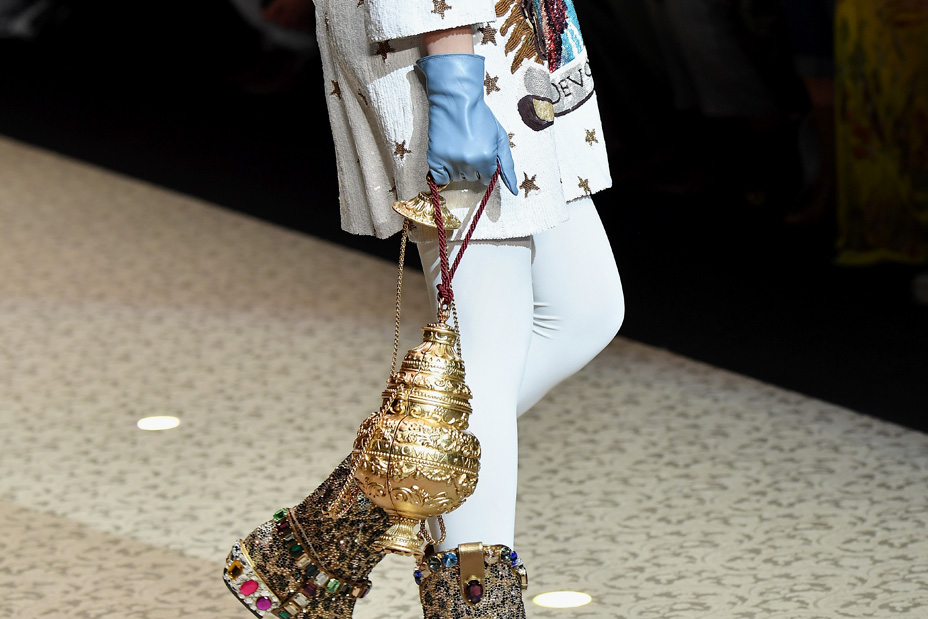 Marni in the Playroom

Francesco Risso brought a more low-key but just as exciting sense of play to Marni, starting with the show space — a romper room of remnants that had guests sitting on bales of fabric, piles of blankets, stacks of newspapers, even old TV monitors.

The inspiration was “regaining a state of primitive bliss,” according to the notes, which, come to think about it, isn’t all that different from disconnecting from WiFi. The clothes had a naive quality, from the opening stunner, a glossy cobalt blue coat cinched with a wide belt, that looked sharp, unexpected and daringly chic. 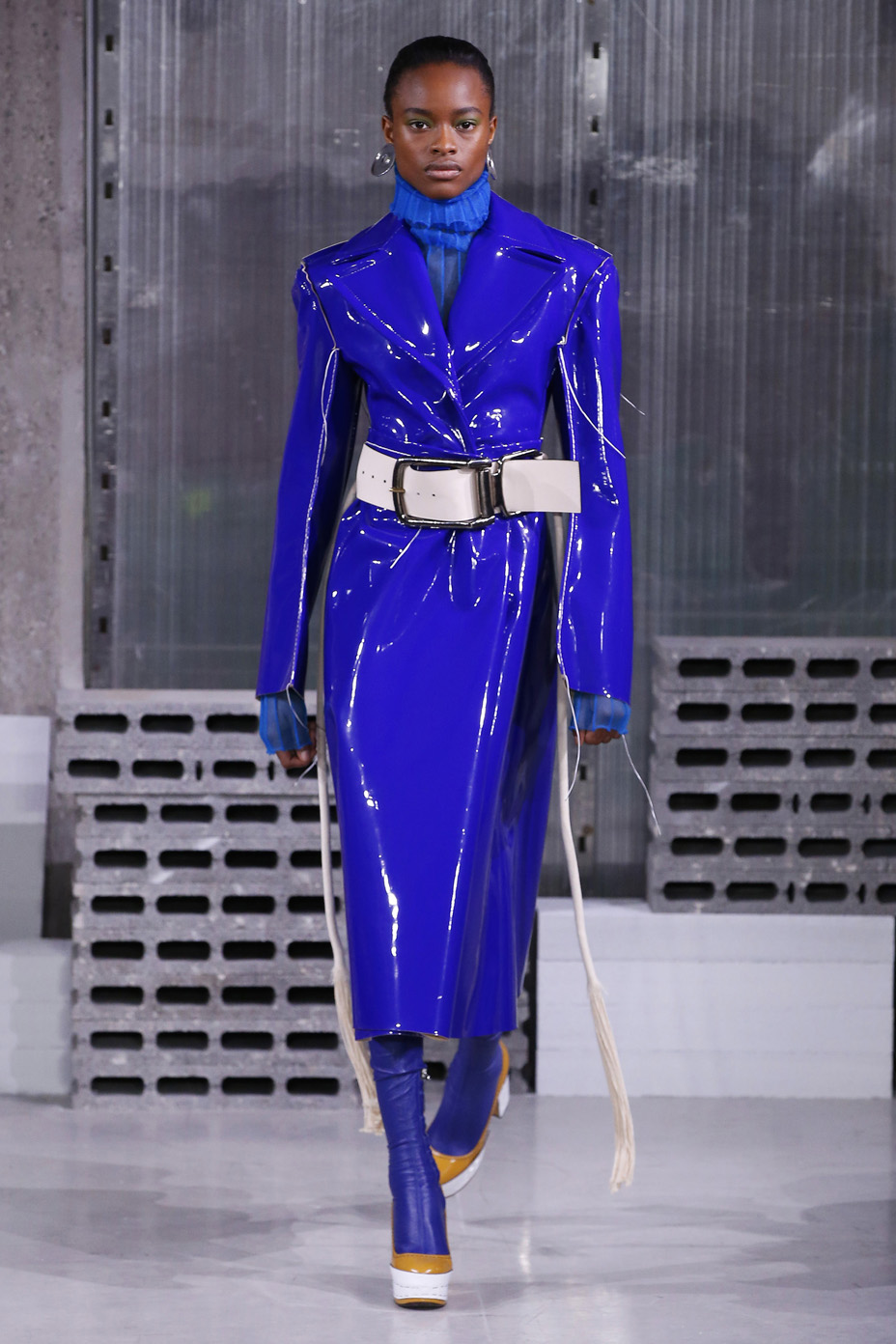 Risso’s use color was indeed blissful, with bright pinks, purples, greens and blues mixing like paints in a child’s palette. The playful mood continued through to mixed material (PVC and python, for example) skirts worn with slim-fitting sweaters, color-block coats and dresses with rope belts that had irregular hammered brass buckles, worn with rubber-tread Mary Janes and feather earrings that must have been 2 feet long. 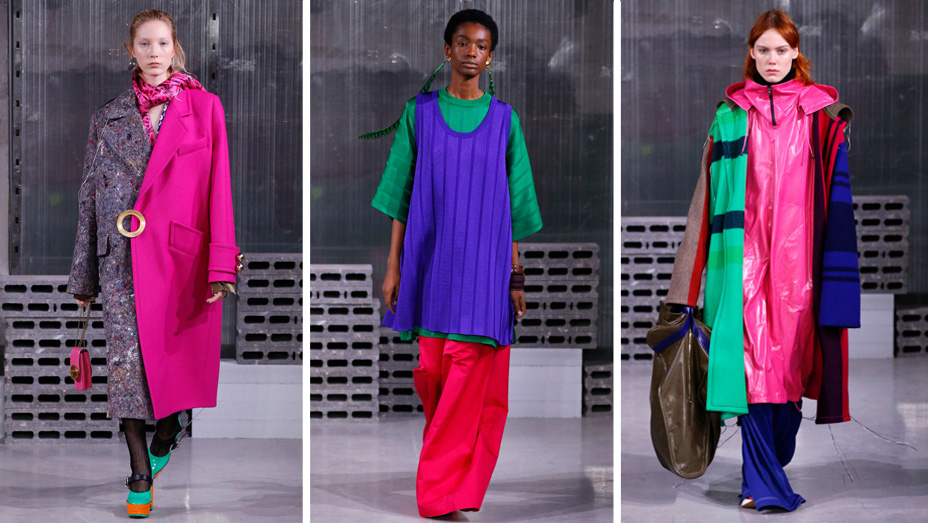 Long knit tunics over wide-legged pants also made a strong statement, as did funky cat print coats. And the two finale dresses, assemblages of sequins with rough stitching, would be perfect for an edgy Hollywood star. For people who were lamenting the loss of Marni creative director Consuelo Castiglioni, who left last year, this collection from Risso is a sign that the brand is worth another look. 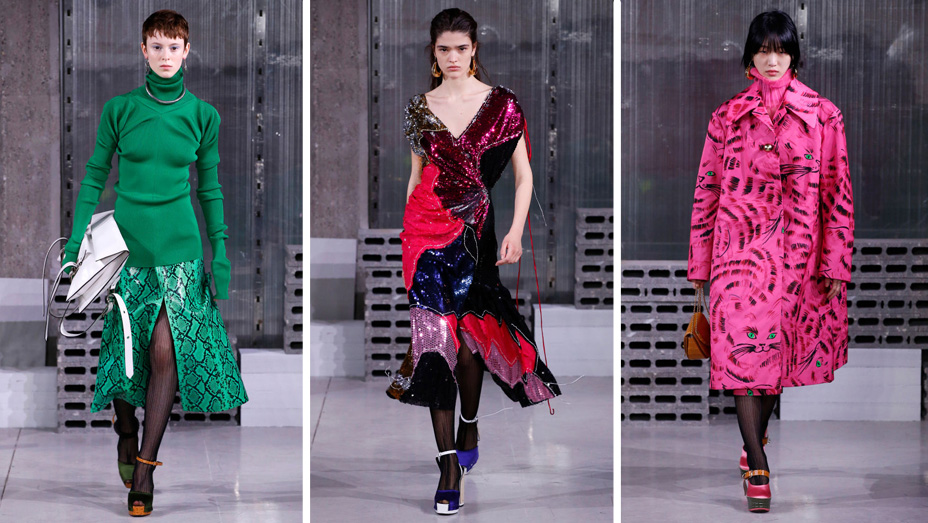 MSGM is a quirky-fun contemporary brand designed by Massimo Giorgetti that’s always got pep in its step. For fall, the collection tied together a lot of the trends we’ve seen this week, including pop colors, nostalgia, athletic wear, and high-gloss patent and vinyl jackets and pants. 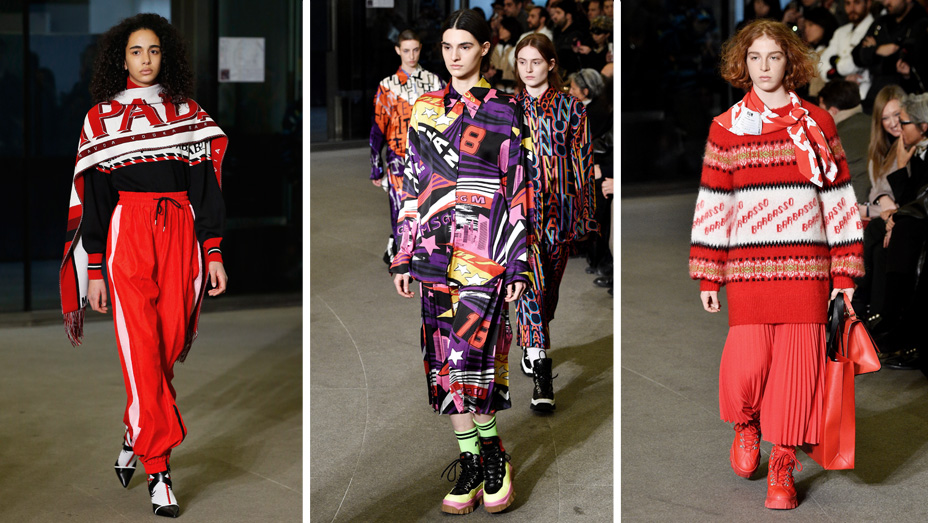 Favorite Milan haunts, including Bar Basso, Pasticceria Cucchi, Jamaica and Pravda vodka bar were immortalized on footballers’ scarves and graphic jacquard sweaters. Giorgetti even used the new Milan skyline (marked by the numerous new buildings that have gone up recently) in a swirly, scarfy print on blouses and trousers. Windbreakers, quilted coats and sweatpants worn with thigh-high boots or high-top sneakers rounded out this ‘90s nostalgic collection. 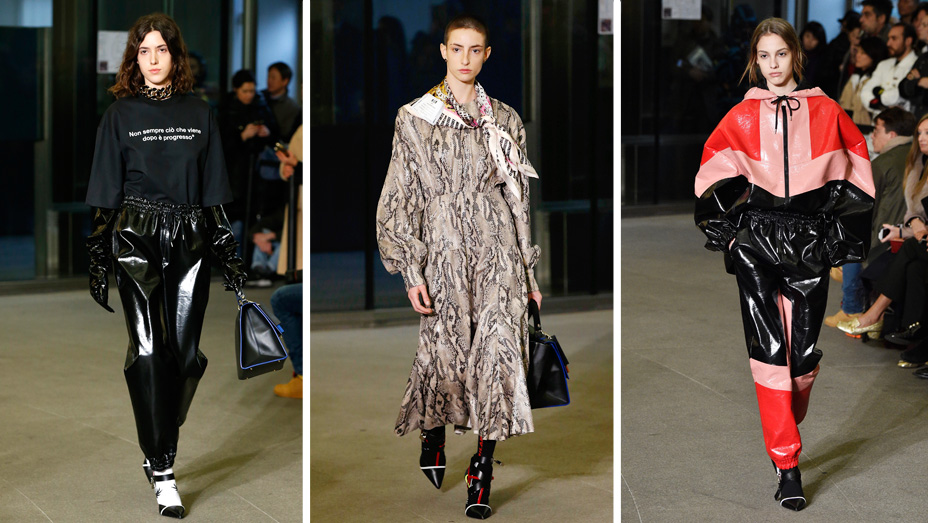 The sport style theme continued at the latest and last of Hilfiger’s Tommy x Gigi see-now, buy-now runway activation, held at a convention center near the city’s nearly finished, starchitect-designed City Center. The theme was motocross, following a recently announced multiyear deal that has Hilfiger becoming the Formula One champion Mercedes-AMG Petronas Motorsport team’s official apparel partner starting in the 2018 season. (That’s synergy, folks.) Naturally, there were simulated drive experiences and photo ops aplenty, and of course, you could shop the in-season spring merch onsite. 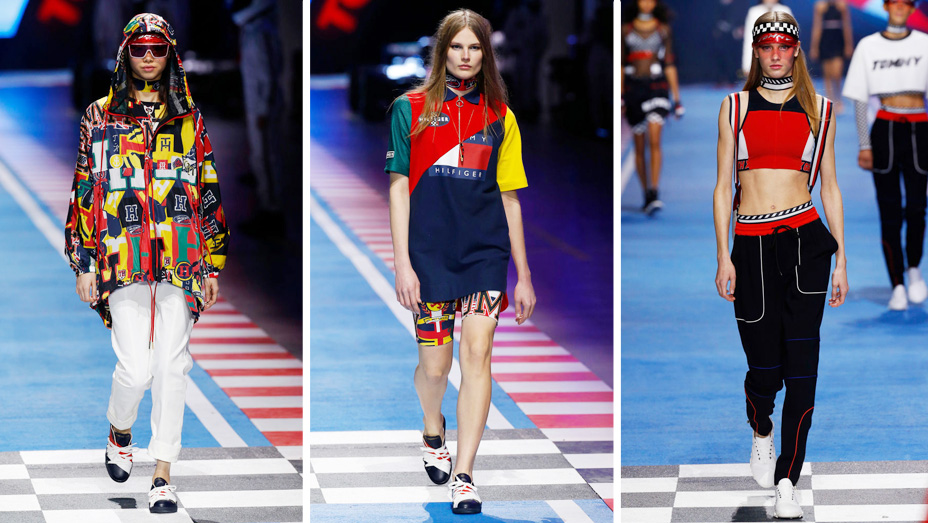 Gigi opened the show in a crop top and cobalt blue motocross pants, and closed it in a gown that was a patchwork of flags and logos that looked very similar to the Versace collection shown Friday. In between were lots of checkerboard-print swimsuits and biker shorts, logo-printed denim boiler suits, windbreakers, minidresses and more — all in American red, white and blue. 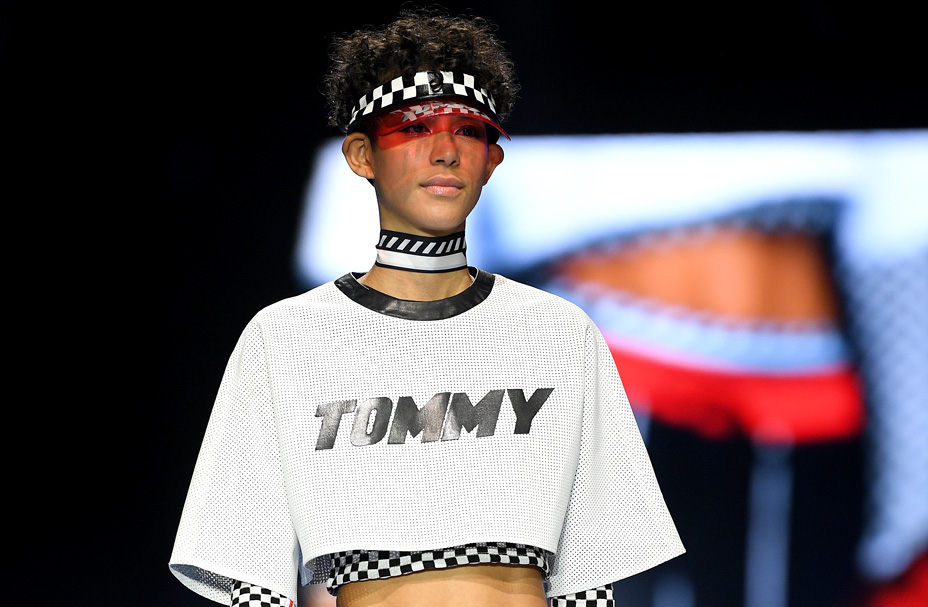 Athleisure and logo mania are all the rage right now, as luxury brands try to attract sportswear-loving millennials and rebuild their fan bases for the long game. Since Hilfiger founded his brand in 1985 with a flag logo and a sportswear focus, his collection looked particularly authentic, not to mention it has a more millennial-friendly, lower price point. In many ways, all the others — Versace, Dolce & Gabbana and more — are just playing catch up. 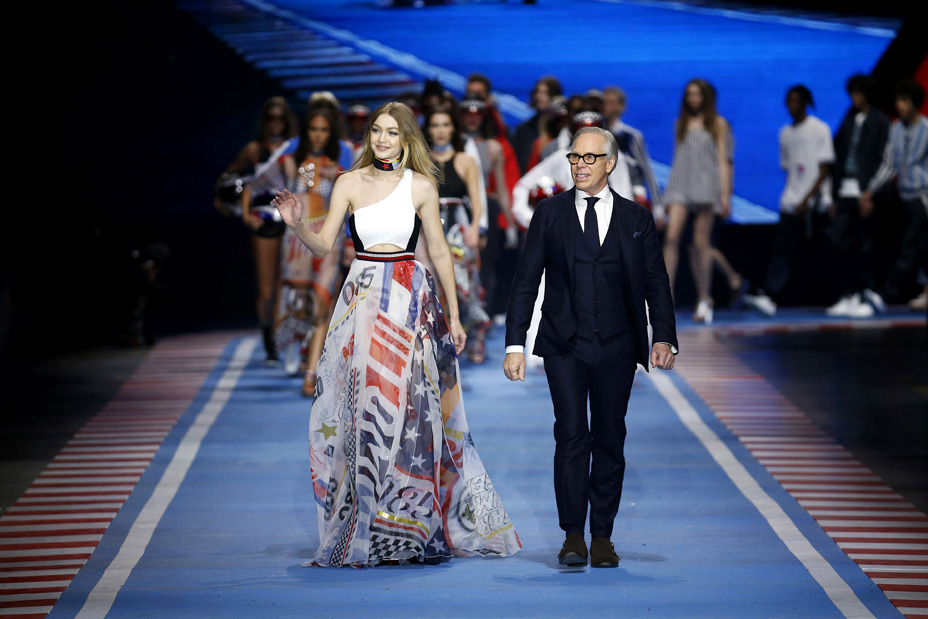 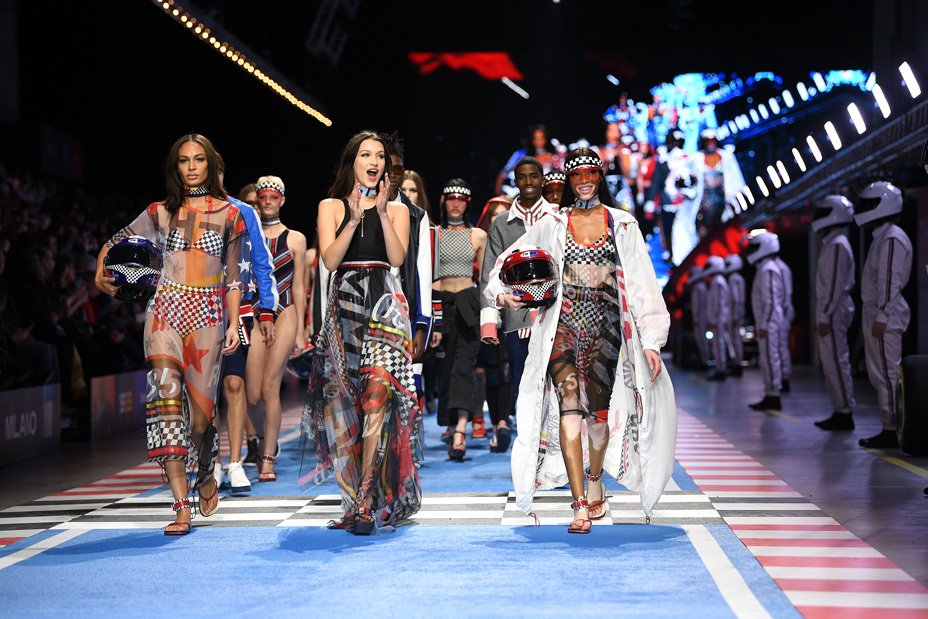