House Speaker Nancy Pelosi has unwittingly become the subject of some of the best political memes of recent months, including her sarcastic clap-back to President Donald Trump’s State of the Union, which prompted comedian Patton Oswalt to brand it the “F-U” clap.

That same day, she dressed in white to honor the suffragettes, along with her fellow congresswomen, an image of solidarity that showed they would not be taking “no” for an answer.

But it was her red Max Mara “Glamis” orange-red funnel coat that made waves across the fashion universe. After leaving a heated negotiation in December with the president, Pelosi emerged triumphant in the 2012 coat, accompanied by black shades and a smirk, in what was thereafter called the new “power look.” In response, the brand is reissuing the coat next month in a variety of colors. 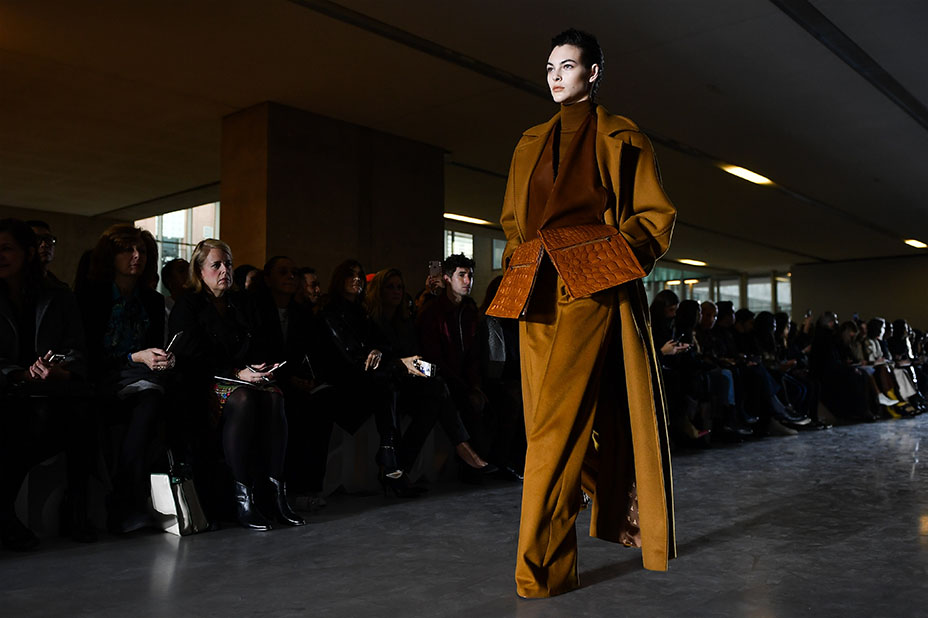 Max Mara creative director Ian Griffiths has embraced the positive PR surrounding the moment, and is doubling down to make it the go-to brand for women who aren’t taking a back seat in life.

Max Mara’s Milan fall/winter 2019 show, titled “Politics of Glamour,” brought out a parade of heavy-hitting looks that showcase the power of women in sharp and strong silhouettes. It was fittingly held at the Universita Bocconi, where half of the graduating class is composed of women, a number that is rising every year.

Between oversized cashmere suits in trademark colors of camel, black and white and shoulder-widening Teddy jackets in new shades of cyan, cerulean and corn yellow, it’s easy to imagine any of the 127 current women holding seats in Congress picking out their next power suit straight off the runway. The new fall/winter line stands out with with sharp, slightly oversize jackets, thigh-grazing leather boots and cropped cargo skirts. 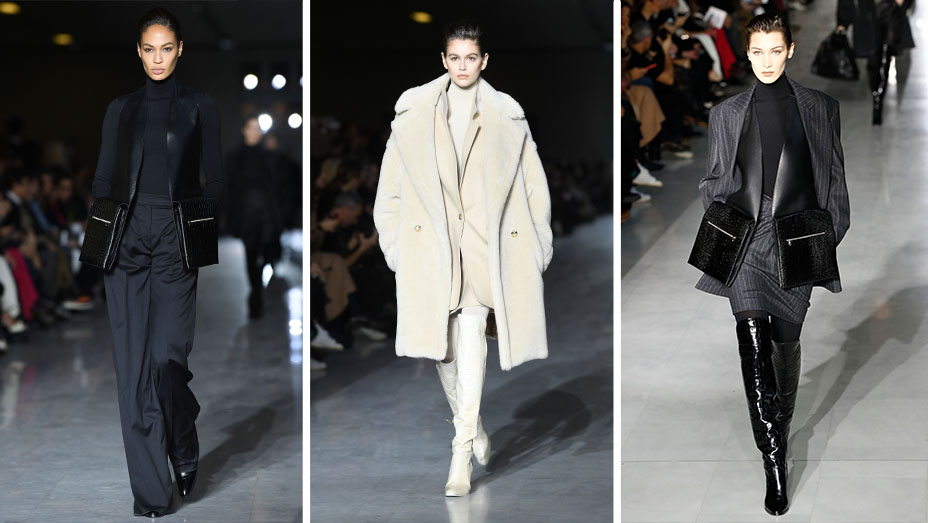 “‘I like glamour. Not afraid of it.’ So declared the iconic supermodel and longtime face of Max Mara, Linda Evangelista,” wrote Griffiths in the show’s notes. “Glamour is the magic ingredient that puts the power into power dressing. More than just ’fashion,’ glamour offers an armory of personae, tricks and tools. Thinkers like Camille Paglia rejoice in that. ‘It’s men who suffer from conventions of dress,’ she says.”

Griffiths designed the collection around the image of a “boss lady,” whom he describes as “sharper, smarter and sassier than ever.”

The clothes were reminiscent of the brand’s own power ’90s archive and its lineup of supermodel ambassadors, so it was only fitting that some of the boldest models working today brought the clothes to life on the runway, including Eva Herzigova, Irina Shayk, Joan Smalls, Kaia Gerber and Bella Hadid. 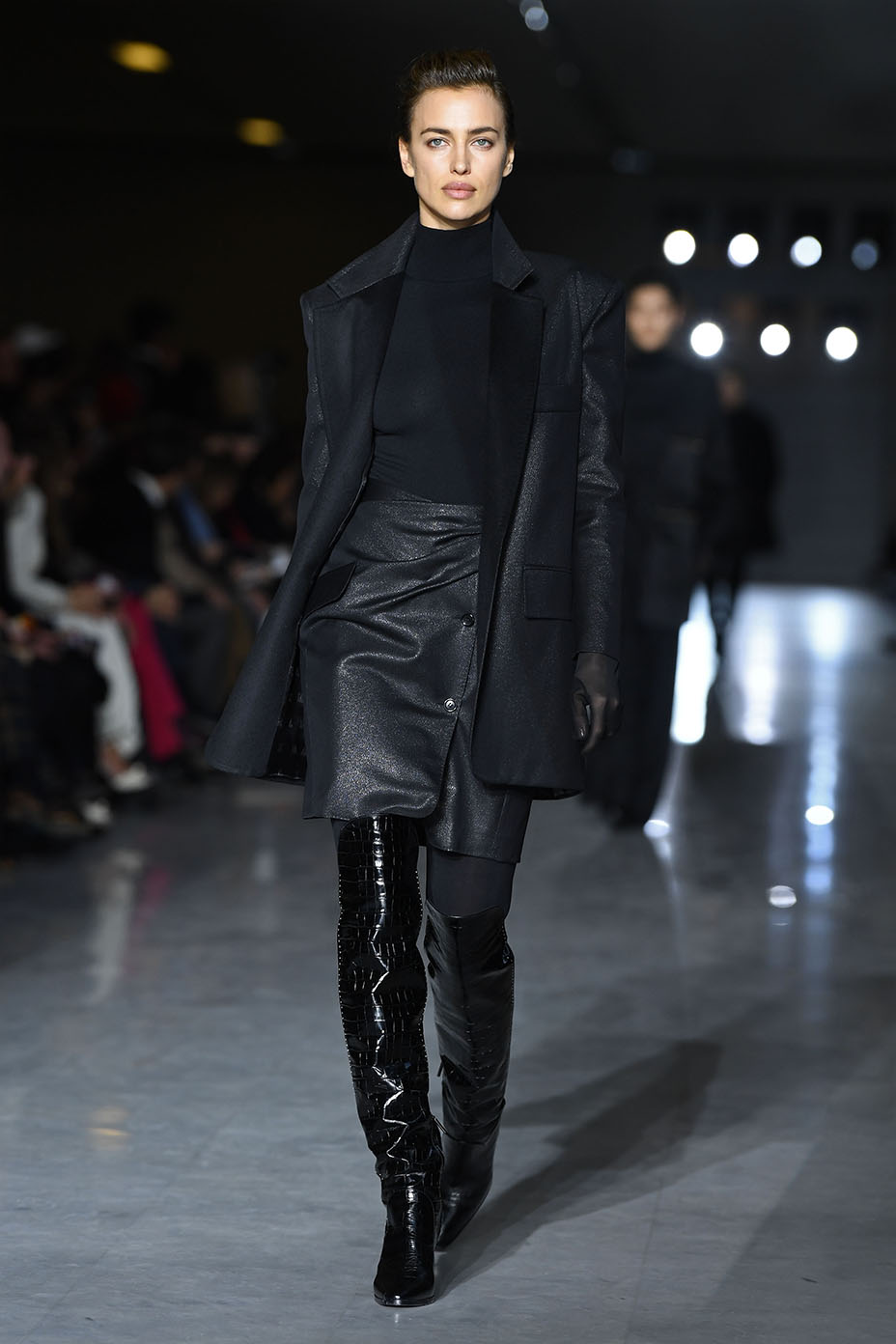 Shayk wowed in an all-black ensemble including a button-up skirt, waistcoat, sheer gloves and over-the-knee patent leather boots. The Russian model later posted a photo on Instagram wearing a Max Mara double-breasted camel coat, something that might just come in handy when she accompanies her partner Bradley Cooper to the chilly Academy Awards on Sunday.

“‘Dressing like a woman means wearing anything a woman deems appropriate and necessary for getting the job done,’ says Roxane Gay,” continued Griffiths in the show notes. With this new collection, he aims to create a power wardrobe that’s practical enough for women to triumph in in all aspects of their lives.