Mindy Kaling is opening up about how having a daughter has “shifted” how she sees social causes and activism.

“When you have a kid, I realize how much easier her life is because of my disposable income and I have one child — [whereas] in the developing world, people have more than one — and how simple and happy my life is with her because every single one of her needs is met,” the multihyphenate tells The Hollywood Reporter. “The one downside about having a child that you love is you give birth and you start to empathize more with children around the world. But it’s good because it’s made me more charitable.”

That’s why she is using her platform to advocate for the “Pour it Forward” campaign by Stella Artois and Water.org, co-founded by Matt Damon and Gary White. In honor of World Water Day on Friday, March 22, Kaling is speaking out about the global water crisis and how others can help — by buying a six-pack of beer. Every bottle of Stella Artois purchased results in the donation of one month of clean water, with the goal of helping 3.5 million people by 2020 (1.7 million have been aided since 2015).

“I’m Indian, and to think of the millions of babies who look exactly like my daughter, who don’t have the same advantages that she does, it is very chilling to me and it’s very personal to me now that I see her face every single morning,” Kaling says of her daughter Katherine, who was born in 2017.

The writer/producer/actress of the film Late Night, starring Emma Thompson and due out June 7, is especially passionate about the cause because the global water crisis disproportionately affects women and children worldwide. “I’m a feminist and I, also as a mom, just care a lot about children. And that’s sort of shifted since I’ve had a daughter especially,” Kaling adds.

“The great thing about this campaign is literally all you have to do is,  when you’re going out for Happy Hour and you have a choice of whatever beer you want, you go with Stella,” she says. Sarah Jessica Parker and Jeff Bridges have previously taken part in Stella Artois’ campaign with their Super Bowl commercial in February, which reimagines Parker’s Sex and the City character Carrie Bradshaw choosing beer over her signature Cosmo. 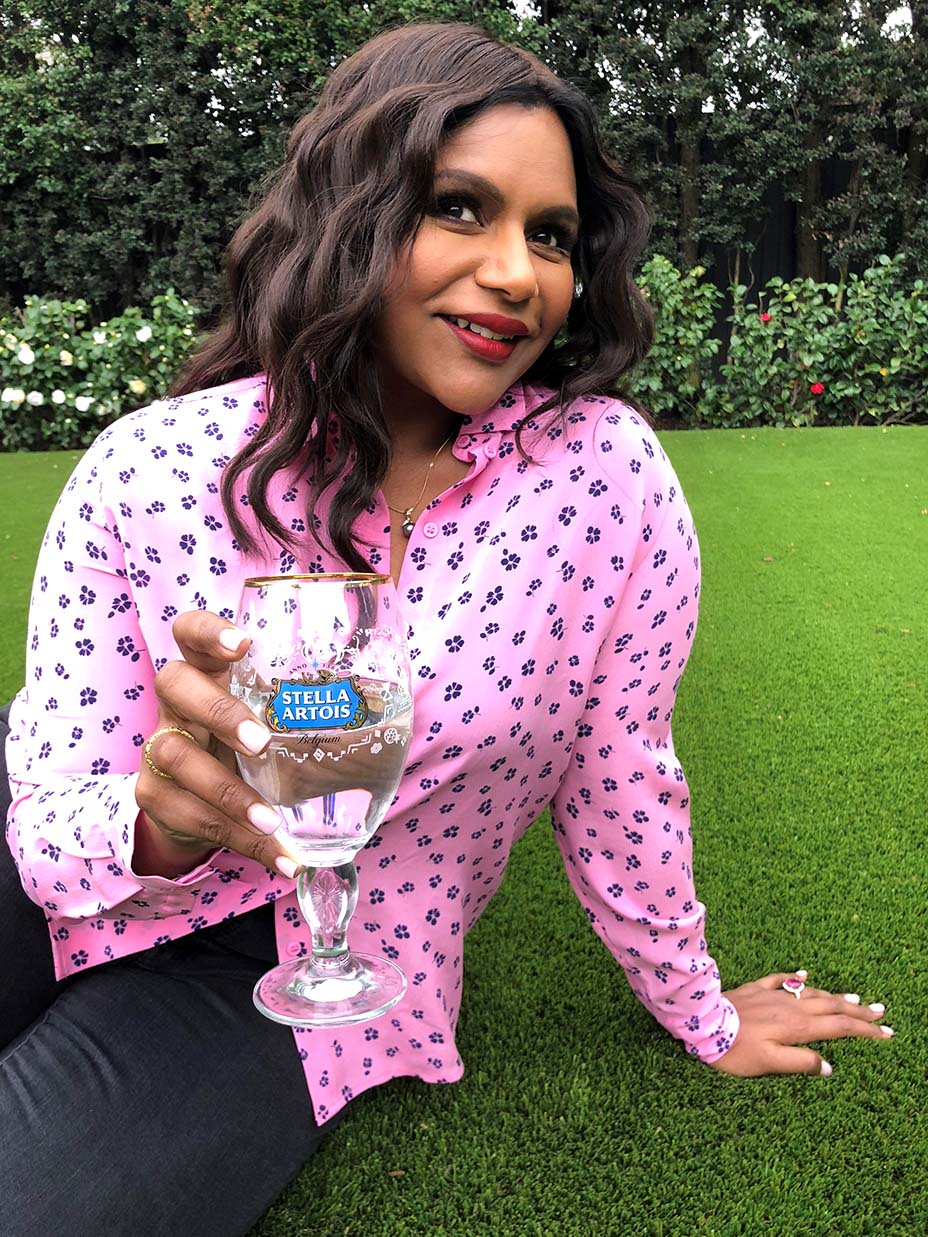 Kaling further discusses the biggest thing she’s learned about being a working mom in Hollywood and that no time is enough time with her daughter.

“I used to tell myself when I was full-time on The Mindy Project and I was acting all day, ‘Well you know what, I won’t be doing that when I have my daughter. And I’ll feel like I see her all day every day, enough.’ But it’s never true. I literally think there’s no world where I would always feel like I bond with her enough and was not shortchanging time with her,” she says.

Kaling adds that even now, though she’s not acting but producing shows like Four Weddings and a Funeral (starring Nathalie Emmanuel and Brandon Mychal Smith), she still doesn’t get enough one-on-one time with Katherine. “I am seeing her more often, but it’s like unless I was just seeing her 100 percent of her day, you always feel like you’re missing out. So I kind of wish I had known that. [There’s] a low-key feeling of not being quite adequate enough and being happy with that and thinking, ‘Okay, I’m coming to terms with that,’” Kaling says.

“She’s obviously one of the most chic, fashionable women ever. She’s another person who has said to me point-blank, ‘I do the fashion so that I can actually have the money to help women,'” Kaling says of the mother of three. “I think it’s incredibly inspiring what you can do. Even while having one drive to be a fashion designer, she has this other drive, which is to be a philanthropist and a woman who inspires women to become CEOs. Not everyone has that be part of their career path!”