Days before walking the pink carpet at the 2019 Met Gala, Mindy Kaling was practically bursting with excitement over sharing her bold, gold look with the world.

During a private lunch hosted by Kaling and DSW on Friday in New York, the actress — who currently fronts an ad campaign for the affordable shoe retailer — told The Hollywood Reporter that she was “thrilled, but a little nervous” about sporting platinum hair with her sequined Moschino gown at this year’s “Camp”-themed fete, emceed by Lady Gaga and Harry Styles. It would be her fifth appearance at fashion’s biggest night.

“There’s one element to what my ensemble will be — one really big swing — that I’m anxious about,” Kaling said, teasing her bright blonde ‘do courtesy of celebrity hair guru Marc Mena. “So we’ll see what happens!”

Despite her trepidation, the typically brunette star’s combination of cascading flaxen waves and severe sparkle was a hit, landing her on several best-dressed lists. Now it’s likely that Kaling’s only worry is whether or not she can return the pricey Casadei heels she wore with her glamorous getup, styled by Jason Bolden. “I’m about to go to the Met, and I just asked how much my shoes cost that I’m wearing — and they’re $1,200!” she said with a laugh. “I was like, ‘I hope I’m just borrowing these.'” 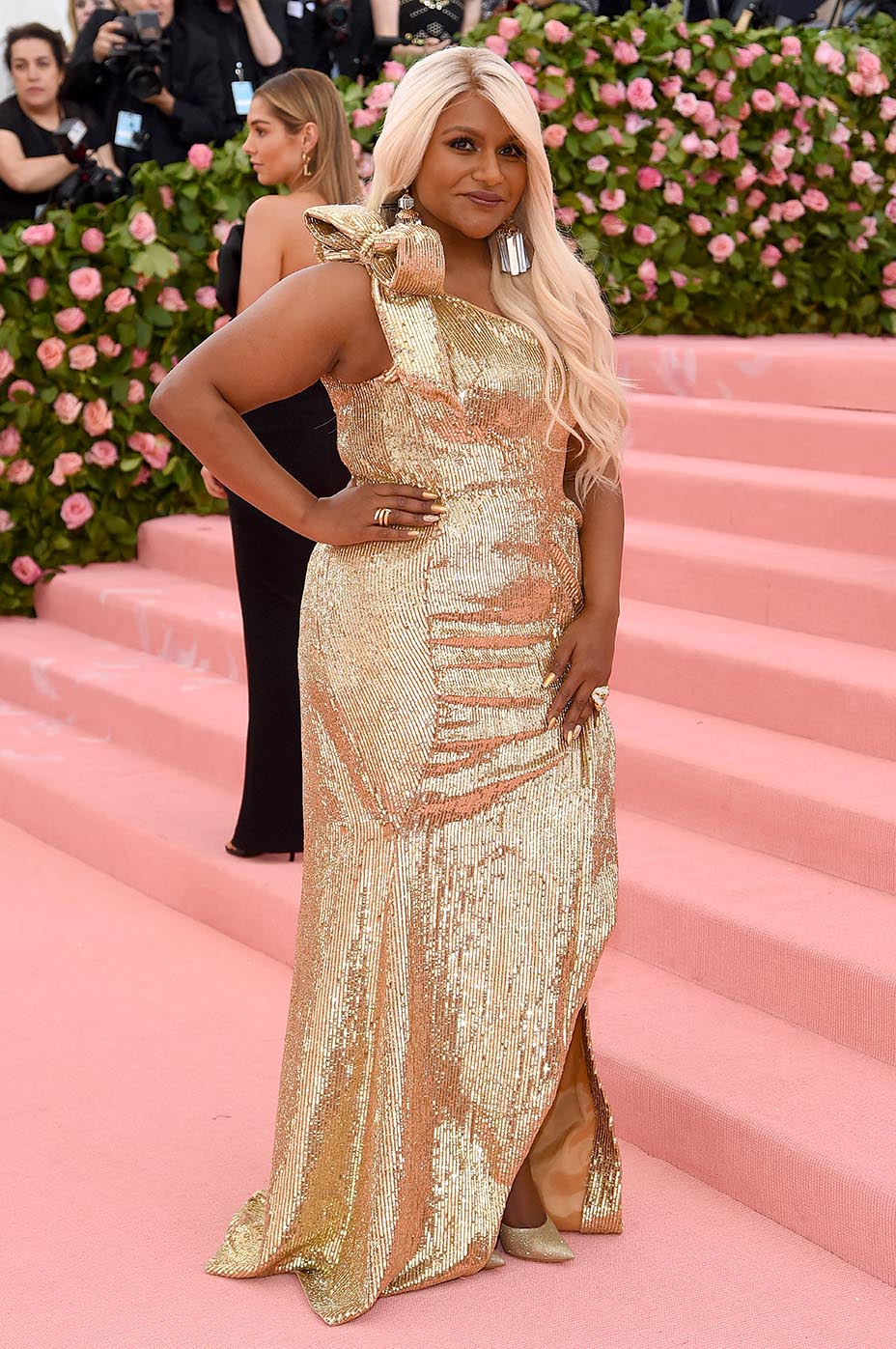 Though Kaling can certainly appreciate a new pair of designer shoes, she can’t fathom spending a small fortune on fancy footwear — which is why, according to the Why Not Me? author, her partnership with DSW feels like a “natural” fit.

“I have shopped there since I was a kid. My mom and I, we weren’t outdoorsy or did spin together, whatever people in New York or L.A. do. We would just go shopping together,” recounted Kaling, who donned a shimmery green Dior dress with $50 Sam Edelman pumps from DSW at Friday’s press event.

“That was how we bonded, so I would get back-to-school shoes there. I got prom shoes there. I got everything there,” she said. “What’s great about DSW is that they have so many beautiful shoes, but it’s not so expensive that you can’t buy new trends each season. So you never feel guilty about getting a new pair.”

Indeed, Kaling is all about experimenting with trends, a part of her sartorial narrative that makes it difficult for her to describe her personal style. “I’m always impressed with people who have a very defined look. My friend Allison Williams has a very ladylike look. Penelope Cruz and Priyanka [Chopra] also have defined looks that I love,” she said. “But, for me, I think I like too many different things and trends. I’ll see someone wearing Helmut Lang and it’s all blacks and grays and I’m like, ‘Oh, that’s how I want to dress.’ And then today, I’m wearing sequins to a daytime lunch. And then I’m full Vegas sometimes. So I wish I had one consistent way of dressing. But I love trends too much. I have an obsession with fashion — all of it.”

Fortunately, Kaling, through her beloved Mindy Project persona, Mindy Lahiri, was able to try out any and all fads from 2012 until 2017, when her eponymous series was on the air. She said her character’s eclectic style was a direct response to having played the “very unglamorous” Kelly Kapoor on NBC’s The Office from 2005 to 2013.

“Obviously, you can tell that The Mindy Project is a reaction to working on The Office for eight years. So when I hired [costume designer] Salvador Perez, I wanted to find someone who was as obsessed with fashion runway things as me but also knew how to dress women who are not a size two,” she said. “It’s a lot of work to keep up — especially on my show, where I would wear six or seven outfits an episode. I wanted someone who never felt like it was work to them because they were just as obsessed with fashion as me. I found that in Sal, and so, The Mindy Project I was really involved in.”

Kaling also had a hand in the styling for her upcoming Amazon Studios film, Late Night. While her own character, budding TV writer Molly Patel, is “not overtly stylish,” her co-star Emma Thompson’s Katherine Newbury — a jaded, Emmy-winning late-night personality — has an affinity for high-end designer pantsuits. As she told THR, Kaling — who wrote the screenplay for the Nisha Ganatra-directed movie — enjoyed helping costume designer Mitchell Travers put together some of Thompson’s “masculine-sexy” fashion moments.

She continued, “We didn’t want it to be that she just wore a dark-colored suit like all the guys. Emma’s tall and loves wearing pants, and she can pull off wearing masculine-sexy really well. So the costumes on that are great, but it wasn’t my character wearing them. It was different styling someone else’s character, but very fun to help out with.” 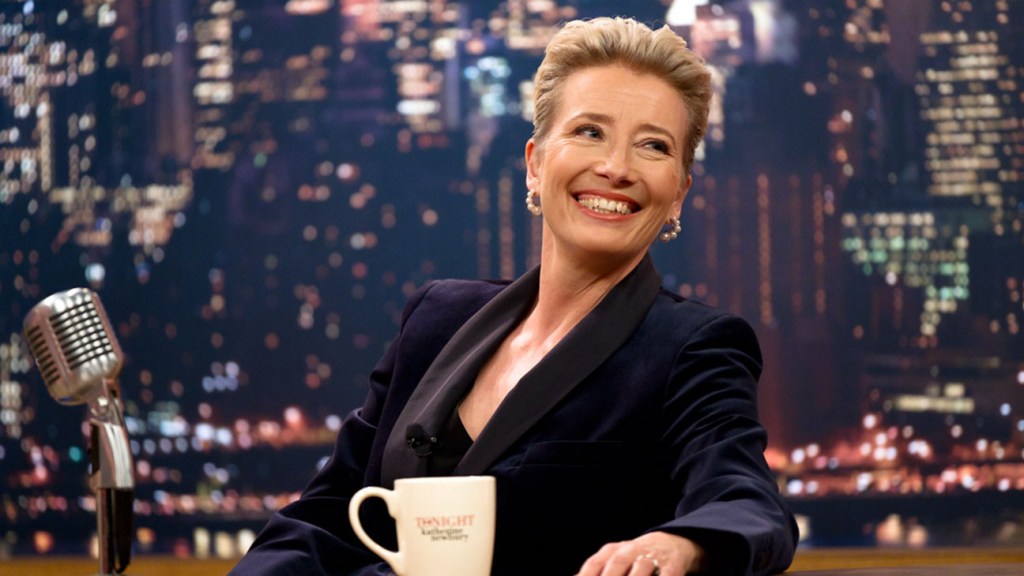 Aside from showcasing Thompson’s fabulous onscreen wardrobe in Late Night, Kaling is hopeful that the film is able to move the dial when it comes to more inclusive casting in Hollywood. The dramedy tells the story of Newbury (Thompson) shaking up the dynamics of her talk show’s writers room — full of white guys — by hiring just one female staff writer (Kaling) in an effort to squash diversity concerns.

“It would be nice to see more diversity and more inclusivity in all film genres,” Kaling said. “What I love about Late Night is that it shows with just complete confidence that everyone in the world accepts the fact that we have a late-night talk show host who is a 60-year-old woman, who’s had it for 30 years. And everyone in the movie just buys it, and Emma plays it so confidently that it seems normal. So that would be a nice takeaway.”

Noting an influx of “juicy roles for women over 45” on television in recent years and calling out female-led shows like HBO’s Big Little Lies and Netflix’s Grace and Frankie, Kaling said she wishes the film industry would catch up. “A lot of the roles for older women are in drama, and they’re normally a grieving widow or something really heavy and serious,” she said. “And Emma’s so funny in Late Night. I just wish that there were more parts like that for women of a certain age. More comedy, please. I would love that.”