When I was younger, there used to be this chant — “One out of three, my mother, my sister and me” — which meant that one out of three women will be assaulted or abused in her lifetime. But I think it’s everyone. I don’t know a woman who hasn’t had something happen to her. Some of the incidents may have been slight, but most women I know have endured something that isn’t very slight.

In late October, the week that the Ronan Farrow piece came out in The New Yorker, five people reached out to me, three of them in the business, telling me what Harvey had done to them, and these people have not come out. Another friend came out to me about having been abused as a child. None of us knew that this had happened to so many of us.

The day that the story was published, Annabella Sciorra called me and said, “Oh my God, Mira, I’ve known you for years …” and then she said, “Harvey raped me.” I had no idea. She was making up her mind about what she wanted to do, and we talked for an hour. It was so horrifying, and I cried for her. Eventually she also gave her story to Ronan.

Here’s the part that people don’t understand. There’s a lot of people who think, “You all knew, you kept silent and you could have prevented so many people from being hurt.” But I only knew of myself for a while and then was told only by one other young woman about her experience. I’ve known Ashley Judd for years — we did Norma Jean and Marilyn together, apparently after our Harvey incidents. We never exchanged notes on this. No one could imagine the serial level of predation that has since become open. I don’t think the actors knew. Maybe the people who run actors’ careers whom we confide in and say, “I have a problem, what do I do?” — maybe they knew. Maybe those people knew the tally much more.

When it happened, I was very young still, in my 20s. It was the Toronto Film Festival, Mighty Aphrodite was coming out, and when something like that happens with your new boss — he was running the company and deciding on the Oscar campaign — you think, “I don’t want to offend him. I don’t want to anger him, I just need to get out of this situation as gracefully as I can.” You’re thinking, “Oh my gosh, Harvey Weinstein is massaging my back, what do I do?” You’re young and you don’t know how to deal with it. You don’t start thinking, “Oh, he’s a sexual predator” — Law & Order: SVU didn’t exist. It wasn’t like I was going to suddenly assume some kind of Krav Maga pose. You just want to get out. That’s why it’s doubly unfair, the whole aspersion that some people cast on the women who’ve been speaking out. All victims should be encouraged to come out, whenever they do, because it is very, very hard. Not blamed and shamed. That attitude only reinforces the culture of silence that empowers the predators.

I wasn’t sure that I was going to help Ronan at first. I prayed about what to do. I called my minister and said, “I think I’m going to use my name even though I’m really nervous about his retaliation and what the career implications will be.” I felt like I may never work again and had to be OK with that. My minister, who happens to be female, thought I had to go forward with my story, and I agreed with her.

It was still an agonizing decision. I have been an advocate for women and girl victims as UNODC goodwill ambassador against human trafficking since 2009, but it’s so much harder to come forward and be your own voice of, “Hey, I’ve been haunted for 20 years by what you did to me.” And I got away without being raped, not like so many of the other people we’ve found out about recently. But I’ve been afraid of him ever since. Every time I saw him at any public event, I plastered on this false smile, just trying to get past it, like everything is normal.

Everyone remembers me telling them at the time. Quentin Tarantino was my boyfriend right after these things happened, and he remembers me telling him. No one ever said: “You should go up against Harvey, you should report him to the authorities. You have a case here.” Quentin thought that he was just really crushing hard on me. That was his interpretation. I was just happy that Quentin was my protector. I think that’s why Harvey stopped trying with me because he would never mess with the girlfriend of his star director.

My dad asked me, “Mira, did you tell me not to do anything about it because you were afraid that it would get me in trouble?” I said, “Yes, I was afraid that you were going to get arrested for beating him up.” People say there are lists out there, that Harvey had a blacklist not only of people he was allegedly investigating but also of people who weren’t supposed to be hired sent to casting people and agencies. I know women with whom I’ve talked since who felt that their careers were derailed. I’ve heard stories about calls being made to their agencies saying that they were drug addicts when they didn’t touch drugs. 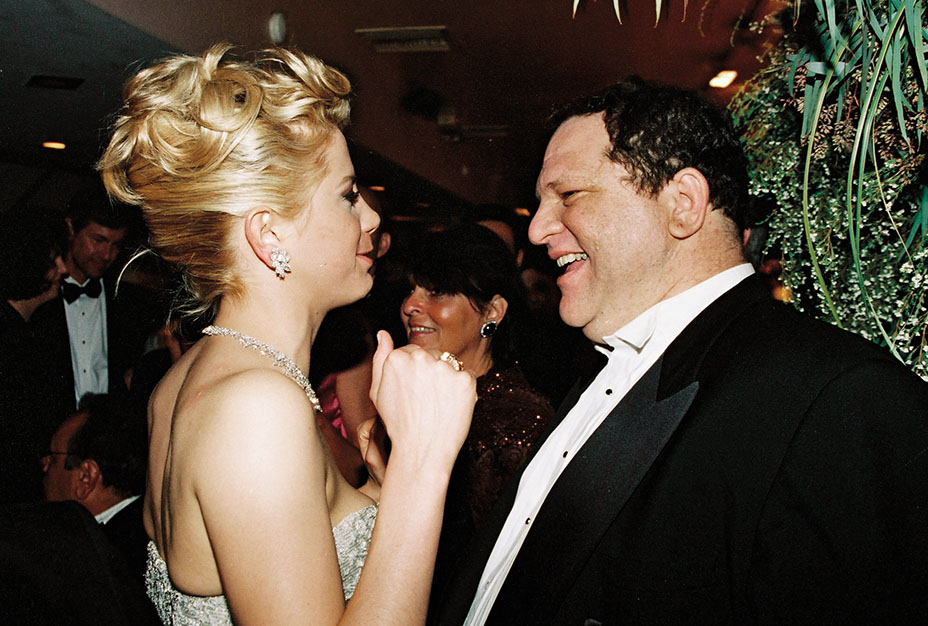 As for my career, I can’t say for certain if it was impacted — there are other variables, like the fact that I had four children in eight years. That’s my choice; I wanted to have a big family. But I won an Oscar with Miramax. To not continue and star in their movies much past that doesn’t make sense. I felt if I had accepted Harvey’s advances, I would have continued to make movies with them, and they were the people winning the Oscars for that decade. I was not offered any movie roles past 1996. I was still on the fringes of the Miramax family after that, but once Quentin and I broke up, that was it. Radio silence.

I usually have a sleepy little Twitter account. One day after the story came out, there were over a million views. Eight out of 10 comments were an affirmation. Two out of 10, the 20 percent that were trolls, were quite disturbing. It felt like a gut punch at times. It’s ironic what people say: “Movie roles over morals.” What movie roles? With Miramax?! (That said, I’m actually in a really good place with my career right now, having just having wrapped shooting the new series Condor, based on the Robert Redford movie, Three Days of the Condor, in a fascinating, complex role.)

Once I decided to tell my story in print, so that other women and girls would not be victimized by Harvey Weinstein, I felt an enormous peace wash over me — that I had the courage to tell the truth about a beast, and in doing so ended his dominion of intimidation that had lasted over two decades. It was a very empowering moment and I’m glad I did it. And getting that phone call from Annabella felt vindicating. She lived with a much more horrendous, violent abuse all that time, with real efforts to end her career — he really tried to hurt her afterward. Just the fact that she read it, that she was saying people will understand now, was worth it.

Female citizens are not free if they live in bodily fear. If you’re afraid that a man can take advantage of you or rape you or force you to do things with him so you can advance your career or keep your job, that’s just nuts. It’s not equal, and it’s not an environment that we can tolerate any longer. I have a 13-year-old and a 5-year-old daughter, and I don’t want that to be their experience, their inheritance as members of this planet. I’d like it to be a real free world for women, not one of fear. That’s one of the reasons I have been vocal on this. For my daughters’ sake, I have to be on the right side of history and help foment change.

It’s wonderful how breaking the silence has become a watershed moment, but it will be worth naught if it doesn’t turn into action that changes the equation. To that end, I recently attended a meeting, organized by a group called Peace Over Violence led by Patti Giggans; Kimberle Crenshaw, co-founder of the African American Policy Forum; and The Vagina Monologues playwright Eve Ensler — who founded One Billion Rising (a movement to end rape and sexual violence against women) — to brainstorm on actionable ideas to combat this pandemic of sexual misconduct in our industry and beyond. The attendees included V-Day executive director Susan Celia Swan; the original women who drafted the civil statute on sexual harassment; Jane Fonda; The Hunting Ground director Amy Ziering; noted legal scholar Catherine Mackinnon; Ted Bunch of A Call to Men (a men’s group working to change the culture so that males do not behave in the reprehensible ways we have seen to be so rife recently); RAINN representative Jodi Omear; anti-campus-assault group Callisto; and SAG, among others. It was an inspiring, emotional evening, resulting in an impending initiative to be launched soon. Some key takeaways included:

1. That this sexual harassment and violence is a pandemic and should be treated as such.

2. That the statute of limitations on sexual harassment or abuse should be abolished.

3. That NDAs should not be allowed to be used to cover up “morals issues” and should be considered void if the person’s conduct is hurting someone else, especially sexually. Far too many men of power have used these legal agreements to intimidate and silence their victims.

4. That education on what our rights as humans are, in the workplace, on campuses, in relationships, etc., must begin early in schools, and become more and more specific as children grow older so that we raise generations of informed, protected people and so that men who will not become harassers or abusers.

It is vital that victims have a place to turn to. Anyone, anywhere in the country can contact RAINN: The national sexual assault hotline is 1-800-656-4673 and will be answered by qualified, compassionate counselors who will hear stories confidentially, and point callers toward options for help, treatment, and/or legal redress and criminal proceedings. SAG also has a sexual harassment hotline — 323-549-6644 — and a pathway to file a complaint online. If this whole experience has taught us anything, it is that we are not alone, and that there is solidarity, love and action possible as a group as soon as we have the courage to raise our voices. Together, we are changing the culture for the better, for the day our children will never have to fear or endure this horror again.

A version of this story first appeared in the 2017 Women in Entertainment Power 100 issue of The Hollywood Reporter magazine. To receive the magazine, click here to subscribe.